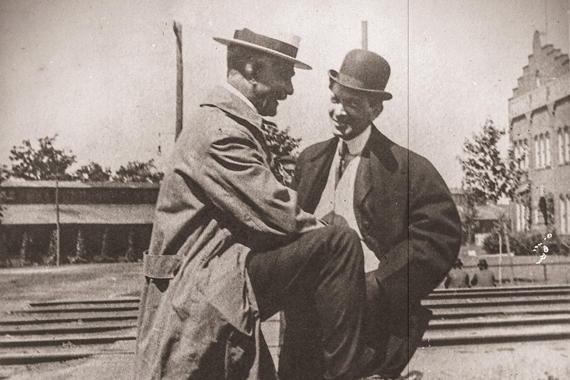 J. Dallas Dort was an important contributor to the development of Flint, both economically and culturally. Although he often stands in the shadow of his more conspicuous business partner and friend, W.C. Durant, his legacy is one of unwavering business sense, kindness and philanthropy, and of the two men, it is he who is looked on as the city’s benevolent father figure.

Commonly referred to as “the First Citizen of Flint” during and after his life in the Vehicle City, Josiah Dallas Dort was born in 1861 in Inkster, MI to Josiah Dort and his second wife, Marcy Jones Straight. He came to Flint in 1879 at the age of 18, and in 1886, he and Durant began the Flint Road Cart Company, as discussed in part one of this series. At the time, Dort was a partner in a hardware business, but he sold his interest in that company and bought a half interest in Durant’s new venture for $1,000 on the very day he learned of it. Perhaps it was his belief in the carriage’s potential, or his trust in his friend’s vision that prompted Dort to quit a safe, comfortable career and go out on a limb; regardless of the reason, the men began what would become the largest carriage-production business in the nation with only two carts, one patent, and a lot of dreams. While Durant was the traveling salesman, roaming the nation in search of new markets and larger orders, Dort remained in Flint, assembling the product that materialized his business partner’s grandiose vision. Historian Robert Schafer emphasizes that while Durant was the face of the company nationwide, Dort was the face of the company in Flint: “It was with Dort that the people who made vehicles dealt, and so it was he who represented the company to them.” As a result, they credited him—and rightly so—for their steady pay, high wages, and for the company’s concern for their welfare and happiness.

Less than a year after starting the carriage company, J. Dallas married his first wife, Nellie Bates Dort. Her account of their wedding day provides a glimpse of the contentment in their relationship: “Dallas and I were married January twelfth, eighteen hundred and eighty seven, at St. Paul’s church … The day was very bright and pleasant, an emblem of our happy married life.” While business matters must certainly have occupied much of Dort’s time—with Durant on the road most of the year and Dort alone in Flint managing production, the workforce, and enlarging facilities to meet with the growing demand for their carriages—he still found time to devote to his family and to the promotion of the arts in Flint society. Nellie and J.D. both being accomplished musicians, musical soirées were often held at their home; J. Dallas himself was a cellist, and in later years he played his Æolian pipe organ for guests. He was the founder of the Community Music Association, which would later become the Flint Institute of Music (the history of which is detailed in the following article), while Nellie was one of the dozen women who, in 1890, formed the St. Cecilia Society, another major force in the musical life of Flint.

After a steady decline in her health, Nellie died in 1900, leaving J. Dallas and his two children, Ralph Bates and Dorothy, alone. Perhaps prompted by his grief, Dort began the Sick and Accident Relief Association at the carriage company. Employees paid an association fee, and in return the company would pay for any medical bills incurred by the employee. Dort, always interested in the welfare of his staff, said that the association was instituted “not only to protect its members in the event of sickness, accident or death, but through its Trustees and by means of its club or other features, to bring the whole body of vehicle and accessory workers into closer relationship and understanding with the factory management.” By 1922, the program’s name had changed to the Industrial Mutual Association, and had expanded to include athletic teams, sponsored trips, and programs for members, their wives and children.

In 1906, the same year that the Durant-Dort Carriage Company reached its production peak and Buick was being reorganized by Durant with the financial assistance of the carriage company, Dort and his children moved into an imposing new edifice on Kearsley Street. A few months later, he and the children travelled to Mackinac Island to bring home a new mother for their family: Marcia Webb, a young musician and music teacher from the island. Although they were exceedingly devoted to each other, Dort never forgot the family of his first wife, and he and Marcia continued to include Nellie’s relatives in their holidays. Together the couple had three children: Dallas Webb Dort in 1908, a daughter named Margery in 1912 and in 1916, David Truscott Dort.

As an active member of the community, Dort was involved in more than just music, although his legacy in that area of the arts endures to this day in the form of the FIM. Other clubs in which he was an avid participator included the Shakespeare club, the Knights Templar of the Masonic order, and the Beefsteak Club, which involved a group of men who met at each other’s homes for cookouts. Although it is difficult to believe that he had sufficient leisure time, Dort also raised Hackney horses and played golf.

Despite the fact that he never held a political office, Dort was national figure. In 1907 and 1908, he was president of the Carriage Builders National Association. In this capacity, he was invited by President Theodore Roosevelt to attend the 1908 White House Conference on Conservation of Natural Resources, an issue that he took seriously when he returned to Flint. His concern for conserving the timber used in carriages was short-lived however; the hour of the carriage began to wane as the automobile’s popularity rose in the first decade of the 20th century. Dort became involved in Chevrolet—the company that Durant was building after being ousted from General Motors—serving as the president in 1912. In 1913, however, he stepped down from Chevrolet and ended his partnership with Durant, who was determined to reconquer General Motors. While it is unclear what caused the men to go their separate ways, it is certain that they spoke well of each other ever after. In 1915, Dort began an eponymous venture: the Dort Motor Car Company. Although this undertaking was relatively transient—closing its doors forever a few months after Dort’s own death in 1925—it was by no means insignificant. In 1920, Dort was listed as the 13th largest producer of automobiles in the country.

Dort was a conscientious man, and his devotion to his country prompted him to support America’s effort in the Great War. His greatest sacrifice for his country was his son, Ralph, who was wounded and later gassed in France. His company, Dort Motor Car, was also converted to produce trucks and ambulances, as well as cars for the military. Personally, Dort took on the task of raising money for the war effort by assuming the chairmanship of the War Bond Drive campaigns in Genesee County. So successful were his efforts that he raised $22 million, 30 percent above the target. In his speech to the men of the War Bond board, he affirmed that his love for his city was as strong as his love for country, saying, “Nothing could possibly mean more to me than Flint. Outside of the love of my family, this is worth more to me than anything else on earth … Others may say that they like this, that, or the other place … but I want to say to you that serving Flint is good enough for me, and serving in Flint suits me, and I will live and die in Flint, I hope among the people whom I love.”

J. Dallas Dort was a prolific businessman, philanthropist and Flint citizen. His love for his city was evident in everything he did, and his last public declaration, more than anything else, is a tribute to the optimism and fire we should all bring to our dreams for ourselves and our city. Only a week before his own death in 1925, he encouraged his fellow citizens to seek out new opportunities, and today, nearly 100 years later, these words still ring true: “What we have got to do is go right out and preach the gospel of Flint to its young men, the leaders of tomorrow… we’re going to awaken them to action. We’re going to start the old Flint ball rolling again. I’m going to put forth my greatest effort. I want to see Flint grow and prosper, I want to see new and diversified industry.”