There is one message above all others that Sol, born Melinda Wilson, tries to impart. “Everybody is seeking happiness, but in the quest for that, you have to love yourself first,” she says. “Once you have that self-love, everything will fall into place. Self-love is the strongest need because once you have it, you can have peace no matter how others may perceive you.”

Upon hearing Mama Sol, speak, rap, sing or recite her poetry, it takes only a few seconds to understand how passion-driven the Flint artist is. Somehow, she has found time to be a motivational speaker, published author, lyricist, hip-hop standout, teacher, poet, college basketball player, emcee and mother. Even a bout with breast cancer hardly slowed her down. Currently, she is especially focused on delivering her message to youth, and was ecstatic about performing in her home town for Martin Luther King Day ceremonies. Sol, whose latest CD, Inside Out, was released on iTunes last fall, loves the unifying aspect of the holiday event. “You have in the audience young people who know hip-hop, but maybe not much about Martin Luther King and you have older people who might not know much hip-hop, but remember Dr. King. To be part of something that bridges the gap between history and hip-hop is amazing and beneficial to people of all ages.” 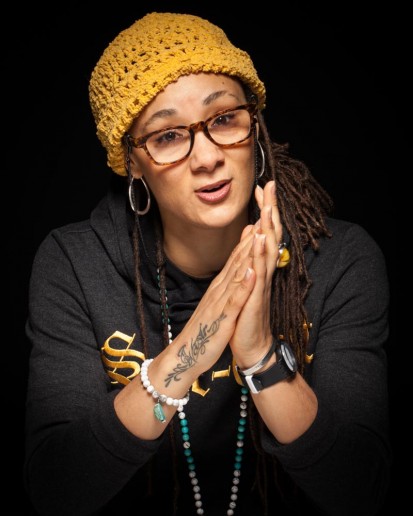 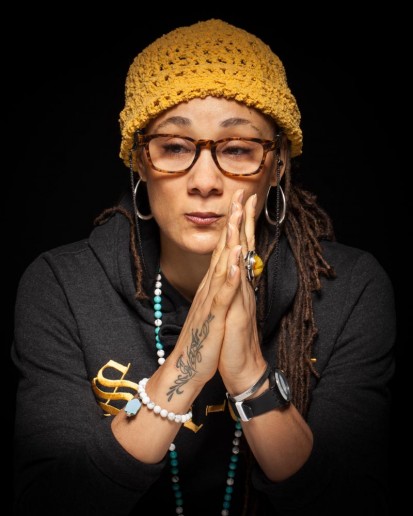 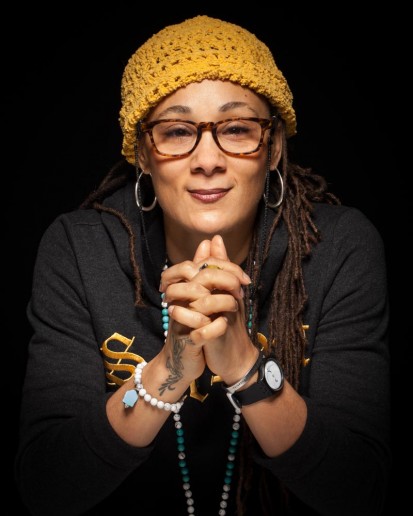 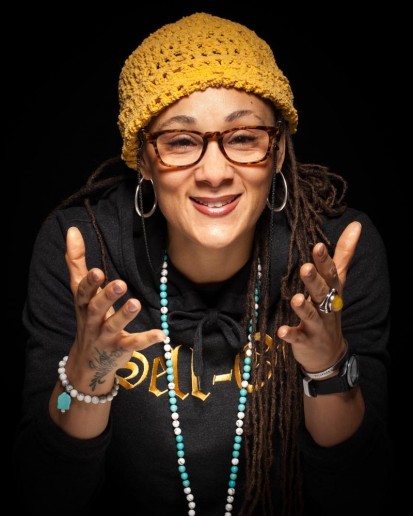 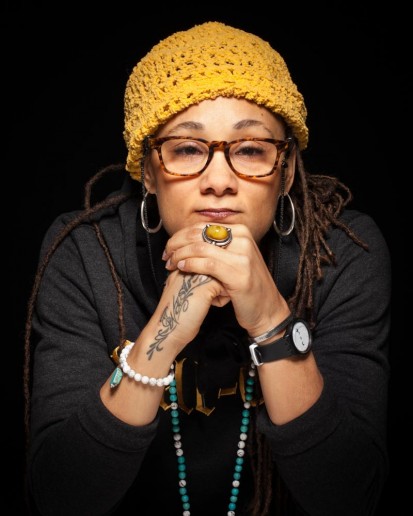 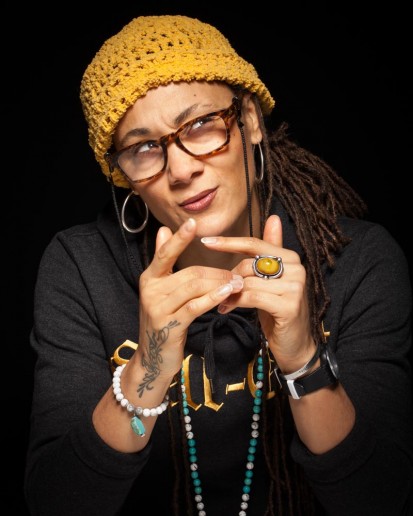 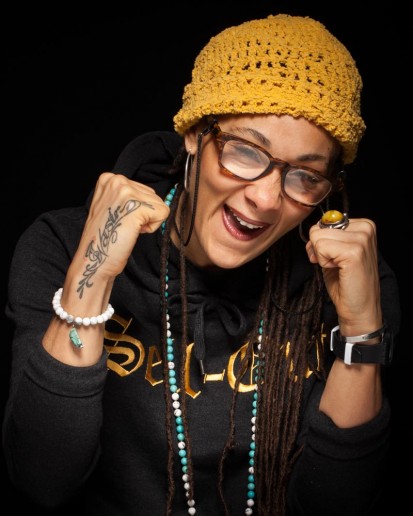 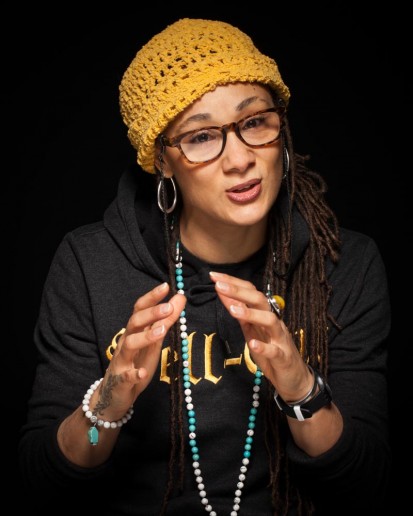 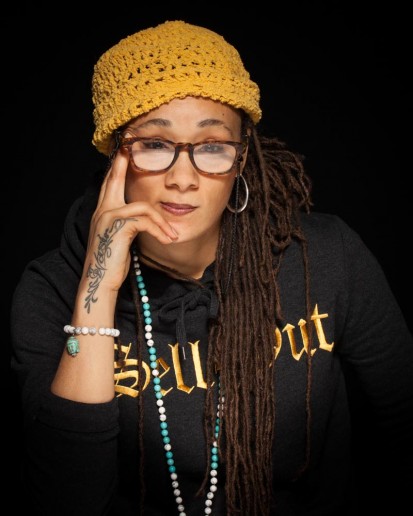 Sol has benefitted from an inspiring life’s journey that has shaped her work and fueled her passion. The child of polar-opposite parents, she grew up in a poor Flint household with her siblings, mother, grandmother and aunt. Her love of music was sparked by her mother, a school music teacher, and her grandfather, a disc jockey. During much of this time, Sol’s father was in prison for crimes related to drug dealing. Following his release, she spent time with her father in Columbus, OH.

“For me, growing up was like Beauty and the Beast because I saw two very different sides of life, but both experiences helped me handle situations in my life,” Sol recalls. “With my mother, we were poor, but she was a gentle spirit and never talked about that, never showed it and we felt blessed to be in a house with so much love, home-cooked meals and everything else. Then there was my dad living in a seven-bedroom house with all these women and other people coming and going at all times of the day in an environment of money instead of love; but dad taught me the power of persuasion and being real with people, because that’s how he survived.”

A dedicated student and athlete, Sol earned a basketball scholarship to Eastern Michigan University, but only played one season because of conflicts with the coach, who was not the one who recruited her. Sol did not allow that to sour her college experience and graduated with degrees in psychology and sociology.

“Performing here means the world to me because even though I have lived in several places, Flint is home and I am happy to be living here now with my nine-year-old son. People ask me why I am in Flint when I could increase my chance for success elsewhere, but I believe you bloom where you are planted, and my seed is in Flint.”
Mamma Sol

After college, Sol came close to a big music break as a member of the grouop Melanite Children, which included members who were back-up dancers for the late R & B superstar, Aaliyah. “We were offered a deal with Jive Records, but we didn’t want to change in the way they wanted us to,” Sol remembered. She then spent more time with her father and more big breaks came her way. She ghost-wrote songs for rap superstar Lil’ Bow Wow and started writing for commercials, which led to a job in New York City with the clothing giant, FUBU. “FUBU was a great place to work and I was flying back and forth from New York to Los Angeles working on ad campaigns and living the high life; however, I fell into some bad activity. In one situation, I actually had a bullet graze my chest,” she said.

It was that bullet wound that she thought was causing her pain while visiting her mother one year at Christmastime. Turns out, however, it was something much more serious. At age 24, Sol was diagnosed with breast cancer. “I had told my mother that I felt a lump and she told me to get it checked,” she recalled. “I told FUBU I would be back from the holiday a little late so that I could do that, and was shocked to find out it was cancer. I never felt I was going to die, though. Fortunately, radiation took care of it and the experience made me start to live better.” 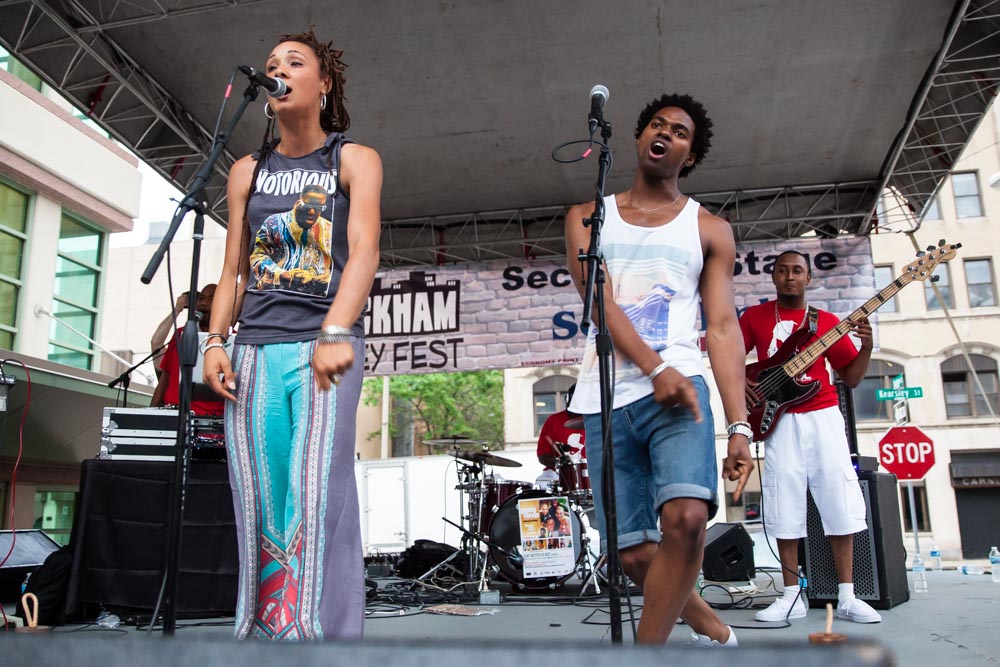 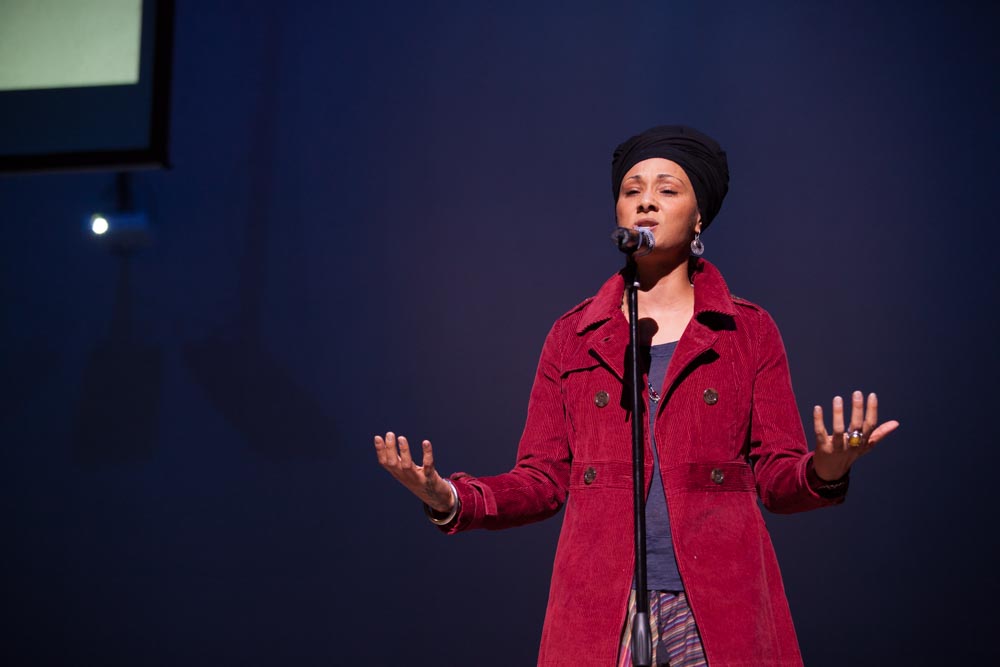 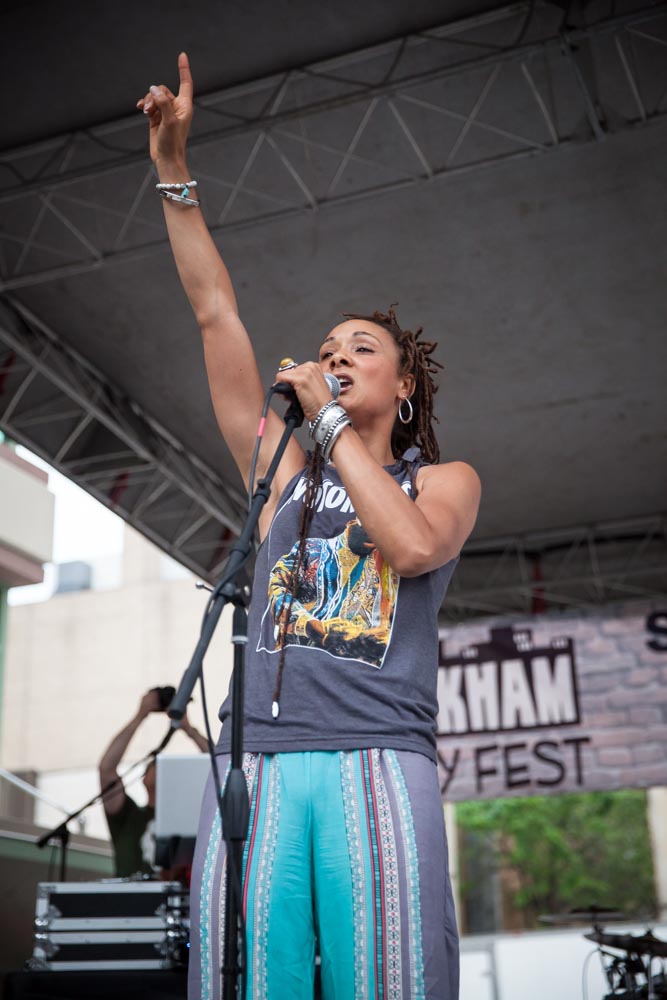 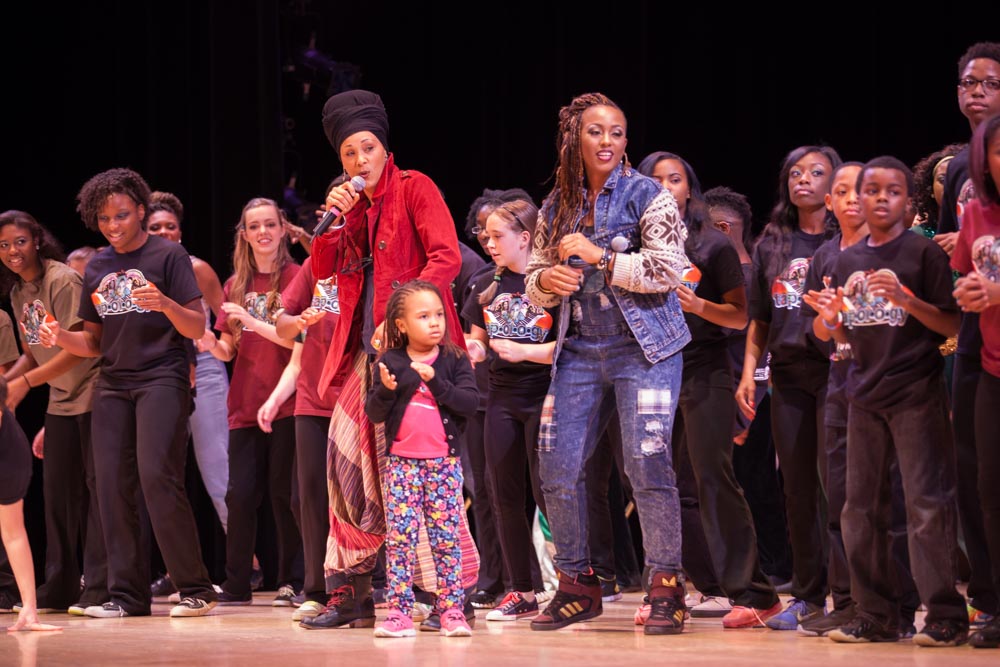 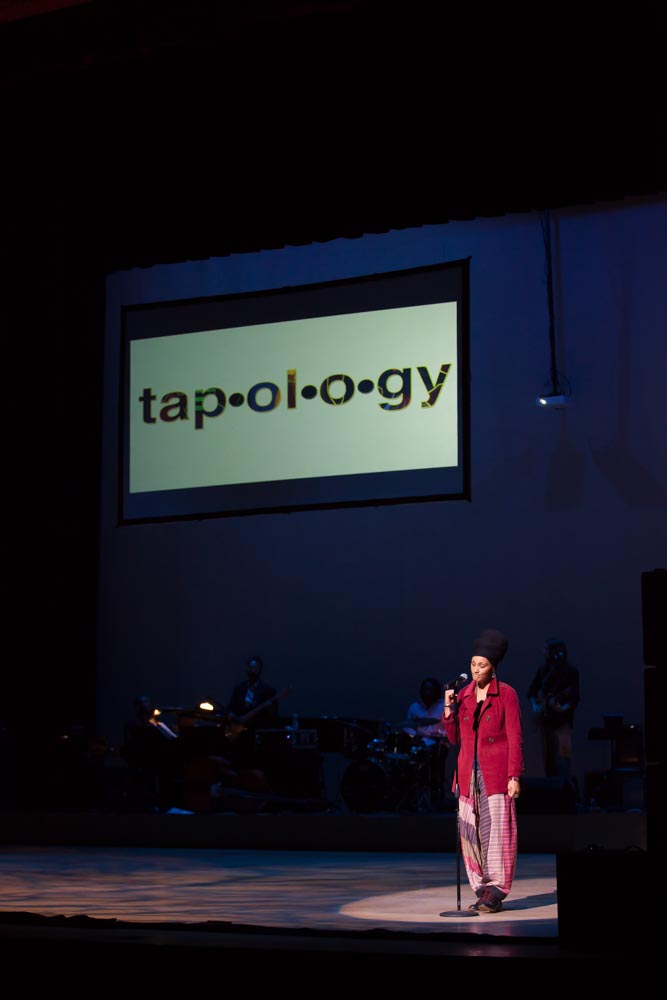 Sol left FUBU and returned to Flint before accepting an intriguing offer to teach at an African-centered school in Detroit. There, she was given the name Mama Sol by some of her students, and started performing spoken-word poetry under that name. Eventually, the lure of the music industry was too strong, and she decided to make it her full-time job, tirelessly working on her songs, renting places to perform and promoting herself. “Through my work in commercials, I knew how to market myself and how to make it happen,” she said. “I also like the freedom provided by not signing a record deal.” Soon, Sol was getting noticed, releasing songs independently and opening for such diverse acts as soul group Destiny’s Child and funk legend George Clinton. She was also receiving positive feedback from the likes of female rap pioneer MC Lyte and the mother of the late rap superstar, Tupac Shakur.

Sol’s compositions deal with subjects like Flint’s blight problem (Abandoned) and responsible fathers (Manhood). “No one can ever deny Sol’s talent, passion, and overall ability to rock the mic. If you’re looking for quality music, check out Inside Out,” posted LV, an afternoon host on Flint’s 93.7 FM, on the station’s website last fall. “I strongly suggest that if you’re tired of the same ol’ hip hop songs, give Mama Sol a chance. I’m confident you will not be disappointed.”

Among her 2015 plans is a tour of Michigan colleges and high schools, mixing entertainment with strong messages. “Music with a strong beat and meaningful words is the perfect way to reach youth today,” said Sol, who also has more commercial work on the horizon. “I tell them that success will find you while you’re working and to never quit your daydream.”

Sol is a living example of that. ♦