In May 1962, Flint residents voted in favor of a tax levy to build a new high school. The official tally showed 13,074 of the city’s 85,047 registered voters went to the polls. As a result, a 2.5 mil tax was levied for one year to provide nearly half of the $4.5 million cost of a fourth Flint public high school. The school was to be built on a 50-acre site the Board of Education owned on the north side of W. Carpenter Road, between Dupont Street and Clio Road. Plans were to have the school ready for use in early 1964. It was reported the school was badly needed to relieve overcrowding at Central, Northern and Southwestern high schools. The new facility was to be named Northwestern High School and similar to Southwestern High School, was expected to house 1,850 students.

In a May 1986 Flint Journal archived feature, it was reported that times were tense at NHS over the last decade, the era of the Civil Rights Movement. Fights, many racially motivated, were frequent. Because of this period in its history, Northwestern established a reputation of being the worst school in the city.
Northwestern gradually changed from an almost equal racial balance to one in which about 96 percent of its nearly 1,800 students were black. The changing racial balance in the school reflected the rapid transformation in the surrounding neighborhood from heavily white to mostly black.
Principal Billye G. Thompson was reported as saying, “My best report is everything’s fine here and we’re doing good things. People make up their mind that this is a bad situation and they won’t hear differently.” It was also reported that the Achilles’ heel of Northwestern was that it was considered a “school for jocks, not scholars.” And while the school was proud of its prowess on the field and floor, Thompson said the district’s math and science magnet for the health professions was making headway in academics, as well.
One student was upset by the reputation. Junior Class President, Sabrina L. Cuba, said she believed Northwestern was safe and she had never seen weapons in school. “A lot of students are upset that Northwestern is the only school to have a bad reputation when a lot of other Flint schools have more violence than we do, but ours is the only one publicized.”
“We still have to battle (the bad image),” said teacher, Ralph Arelliano. “Anyone who comes here always seems so surprised that it’s so good.”

On August 26, 1991, it was reported that NHS Principal, Bessie Straham, began her position for the upcoming school year, Flint’s first woman to be principal. Having grown up blind, Straham said, “I grew up in a very blessed atmosphere where I was taught I could be anything I wanted to be. Being black was not an excuse, being poor was not an excuse and being a woman was not an excuse.”

In the early 1960s, Flint schools stopped having homecoming celebrations, after it was reportedly deemed racially divisive. The city’s other schools had since reinstated homecoming events. In 1994, a group of Northwestern juniors approached school officials and asked that homecoming be reinstated at their school, and they got approval to do so. Students who attended the homecoming football game that year between Northwestern and Bay City Western High School said the homecoming was a morale-boosting event that was long overdue. Yolanka Barton and Morris Peterson, who were crowned homecoming queen and king, were treated like royalty with a crowd of approximately 300 people clapping and cheering. “I’ll do my best to uphold the credit of being homecoming queen of Northwestern,” Barton said. “It makes me feel special to have the opportunity to be the first homecoming king,” said Peterson.

In May of this year, NHS gained national attention when National Geographic magazine ran a story written by Jiquanda Johnson and Lindsay Smith about the school’s last prom. “Prom in Flint is more than just a dance. It’s a celebration of triumph and survival – and this year was Northwestern High School’s grand finale.
“The event marks a moment more significant than the dance itself. It’s an affirmation that these students have made it through the many challenges they faced growing up in Flint.
“Prom is a time for students to set aside these difficulties and show off their best. Beyond honoring the glamour and glitz, it’s a chance for the community to celebrate its students – their individuality, strength, and potential. On prom day, the teenagers become the town’s stars.” 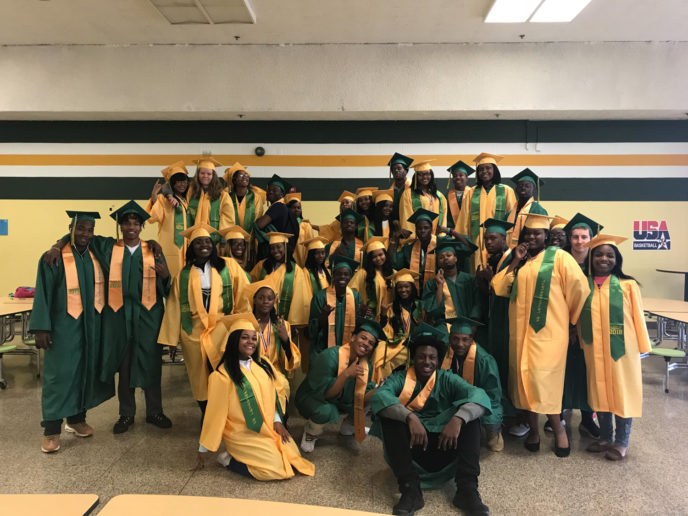 Here are a few standouts he mentioned:

Kelvin Trent Tucker graduated from Northwestern in 1978. He is a retired professional basketball player who played 11 seasons in the NBA. A 6’ 5” shooting guard, Tucker attended the University of Minnesota from 1978 to 1982, leading them to a Big Ten Conference championship in his senior year. He became the New York Knick’s top selection in the NBA draft.

A 1984 graduate, Grayer is a retired basketball player. The 6’ 5” 200-pound shooting guard starred at Iowa State University from 1985 to 1988, where he set the all-time career scoring record with 2,502 points. In 1988, he was named three-time all-Big Eight and All-American, and was also chosen in the NBA draft first round by the Milwaukee Bucks.

Graduating from Northwestern in 1985, Rice was one of the greatest scorers in college basketball history, leading Michigan to the NCAA title in 1989. Two months later, the Miami Heat made Rice their No. 1 pick (fourth overall) in the 1989 NBA draft. Rice was a three-time NBA All-Star, and made 1,559 three-point field goals during his 15-year career. Rice won both an NCAA championship and NBA championship during his collegiate and professional careers.

Kelly Fields, who was the NHS principal last year, refers to the students there as “my diamonds.” Why? “A diamond is in a dark place for a long time. It’s put through the test and comes out this beautiful, gleaming thing!” she exclaims. The longtime educator has taught at all of the Flint high schools, but the students at Northwestern will always hold a special place in her heart. “They were the most generous kids I have ever met,” she shares. “They were from the most vulnerable part of the community but they would lift you up. They are my favorite because of that. Being a Wildcat meant something to them.”
Fields had worked at Northwestern for five years, first as a teacher, academic engagement officer and then as principal. She saw a lot of things, both good and bad. The most difficult thing for her was dealing with the tragedy of losing four students to gun violence. “It was rough,” she admits.
But there are many good memories. One of her favorites is when President Obama visited the school to address the water crisis. “We had a lot of pride that he came to Northwestern,” she says. Most memorable to her, however, happened last year. NHS received over a million dollars in financial aid and scholarships. “It was all due to the hard work of the kids,  the college advisory team and counseling staff. We had an extraordinary group of honor kids.”
Another highlight was the prom, the last one for the Wildcats. Both Northwestern and Southwestern Academy held their proms the same evening at Kings Castle in Lake Orion.”It was wonderful!” Fields exclaims. “It was a beautiful time and just a joy to watch. The Southwestern kids were on the other side, but by the end of the night it was one big, huge prom!”
Although Fields is sad to see Northwestern close its doors, she believes it was necessary. She is very glad to see it repurposed for use as an alternative learning school. “I cried like a baby when it closed,” she admits. “But with the changing demographics of the City of Flint and more educational choices, Flint schools have a system in place to better meet the needs of the families of Flint.”
What Fields misses most is the students. “I miss laughing every day and watching those kids show up and be their very best. Not a day went by that a kid didn’t bless me and make me smile. Northwestern kids had my heart. They had tenacity, grit and determination. I’m proud of them. They overcame a lot. “ 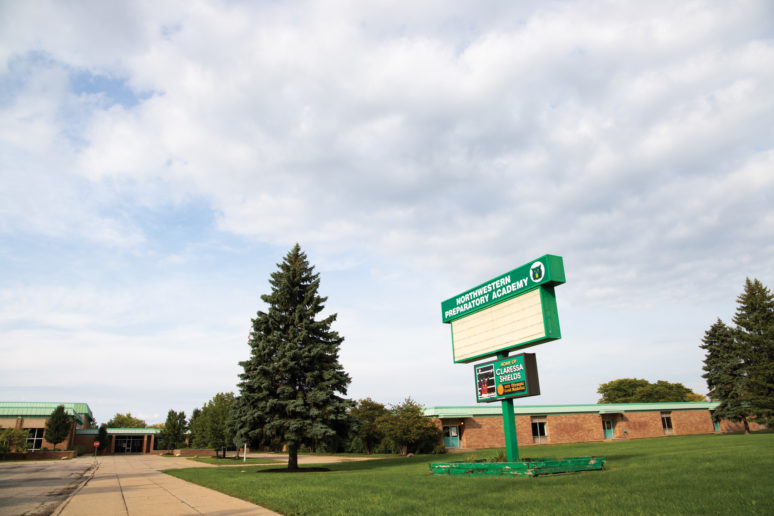