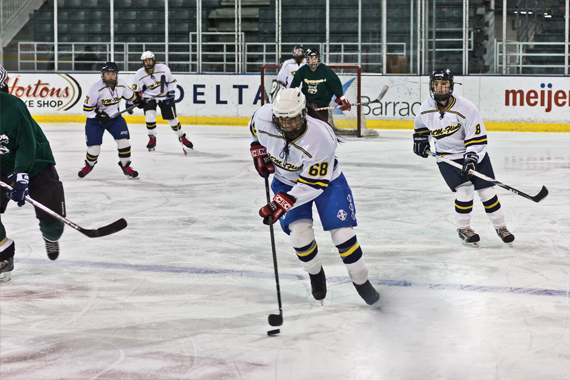 “Hockey players have fire in their hearts and ice in their veins.”

The quote above can be found on the website of the first-ever women’s hockey team at the University of Michigan-Flint. The Women’s Ice Hockey Club was formed in 2011 by student Nicole Baragwanath. “I was working on my master’s degree,” says Nicole, “and I noticed there was a men’s team but no women’s team.” Nicole reached out with a mass e-mail to find women in the area who were interested in playing hockey. There were just four girls at the initial meeting, including Betheny Bachi, who is now one of the team’s captains. “We struggled at first to find enough skaters, but it has been really satisfying to watch the team come together,” says Nicole. Over the last year, the players have been dedicated to growing the team, finding a coach, fund raising, and most of all, playing hockey and developing team skills.

The team belongs to the Michigan Senior Women’s Hockey League, and the girls will play 24 matches this year against other colleges. “This team truly has been built from the ground up,” says Amy Burt, Manager. “We started practicing as a group of only about six players. Now, we are 16 girls who have joined the MSWHL, playing games consistently and growing within the community and within the hockey world.” Amy became interested in hockey a few years ago after attending a Red Wings game with her boyfriend. “That’s where my passion for hockey started,” she remembers. She received the e-mails about U of M-Flint starting a women’s hockey team, and despite having no experience, she decided to take a chance and give it a shot. “I had no idea what I was getting myself into,” she laughed, “but I love it!” Being the team’s manager has influenced her tremendously. “It’s introduced me to a whole new community of people and has helped me develop as a leader,” she exclaimed. “In taking on the role of manager, I’ve evolved as a person and as an athlete far greater than my expectations. My mind is constantly thinking ‘hockey, hockey, hockey.’”

Many of the girls on the team grew up with male family members who played hockey, and most also played on a boys’ team as youngsters. However, as the girls got older, it became harder to find teams to play on, as the boys’ leagues were too rough. Nicole grew up watching her cousins play, and they were her inspiration. “I started playing organized hockey about seven years ago and I wish I’d started earlier!” she exclaimed. “I enjoy being on a team and working toward a common goal.” Beth’s older brother was a hockey player and she joined a boys’ team in the third grade. “I like sports,” says Beth. “Not many girls play hockey. It’s something to be proud of.” Alyssa Purcell, who plays center for the M-Flint team and is also a team captain, has played hockey all her life. Both her dad and her brother played and she’s been on boys’ teams, traveling teams, and in a league at Oakland University. She loves the competitiveness of the sport.

Women’s hockey is all about finesse and skill, as checking is not allowed.

The team faced a setback this year when Amy, a key player, shattered her ankle in a car accident. Her injury kept her off skates for several weeks, but the team’s coach, Brian Ward, keeps the team moving in a positive direction. “He is very devoted and he takes time out of his personal life to help us,” says Beth. “He pushes us to work harder.” Brian calls coaching a rewarding experience because he is part of a growing team. “We’re adding new players of all skill levels and constantly looking to add more student athletes to the program,” he says. “I expect the girls on the team to represent the school in a professional manner,” Brian added, “and we appreciate the opportunity that the University of Michigan-Flint is giving us. In time, we’ll grow this team into something special.” The girls’ commitment to the team is obvious, as they practice very early in the morning in Lapeer, a 45-minute drive from the campus.

The girls and their coach agree that their ultimate goal is to join the ACHA – the American Collegiate Hockey Association – within the next two years. “I also hope to see this team bring positive energy to the community and become mentors to young women in the Flint area.” Alyssa smiles, “I just hope to inspire a little girl to play hockey.”

“We appreciate the opportunity that the University of Michigan-Flint is giving us and in time, we’ll grow this team into something special.”
Brian Ward, Coach – U of M-Flint Women’s Hockey Team 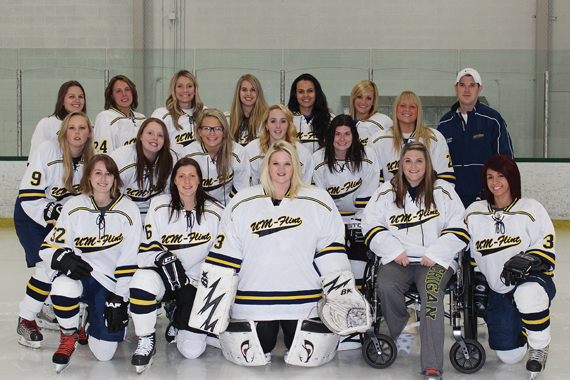 The U of M-Flint Women’s Hockey Team is coached by Brian Ward, who says that the girls are hoping to eventually join the ACHA: American Collegiate Hockey Association within the next two years.