Radio personality George McIntyre wears many hats at Townsquare Media. He is an on-air host at CARS 108, as well as the assistant program director, music director, and the IT manager for the company’s entire cluster of six radio stations.

George became interested in radio broadcasting at a young age. “I was bitten by the radio bug when I was in high school,” he says with a laugh. He won a contest while listening to a radio station in Alpena and his parents took him there to pick up his prize – a Smokey Robinson album. While he was there, he had the opportunity to sit in the control room, and he was hooked! 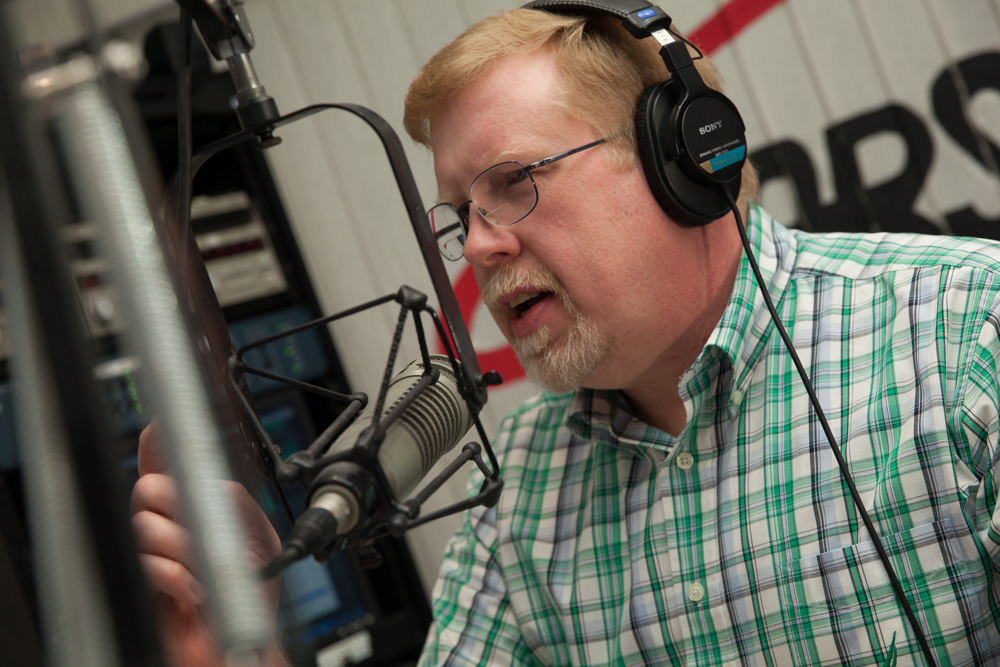 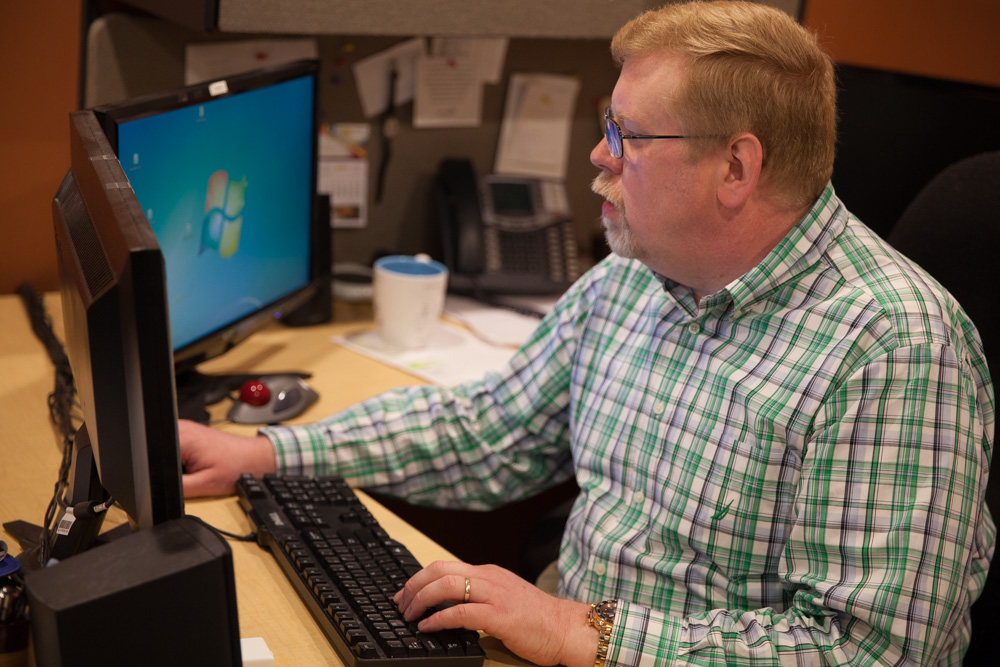 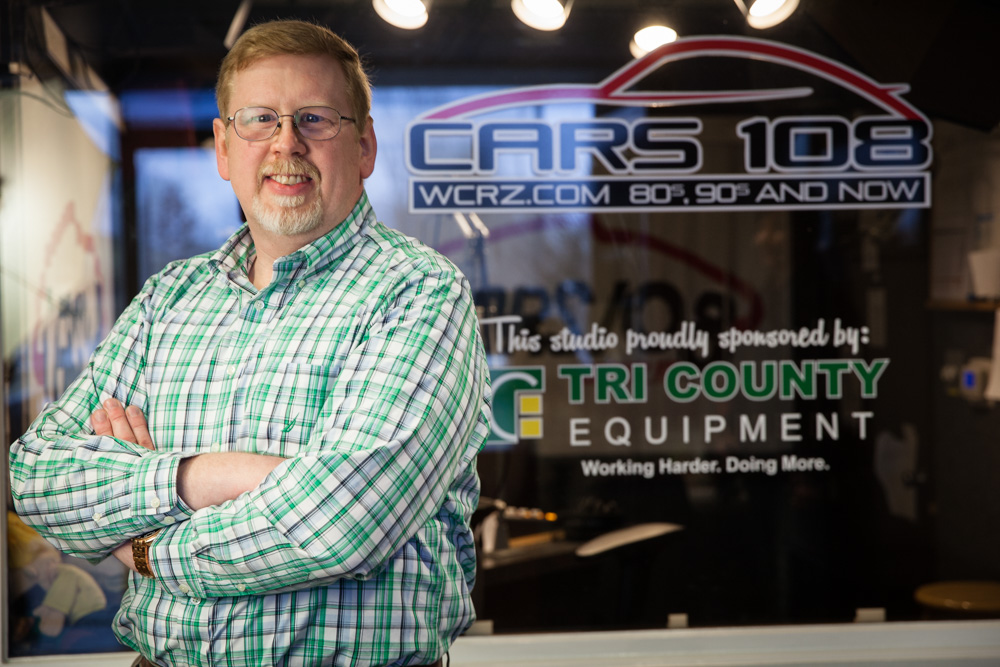 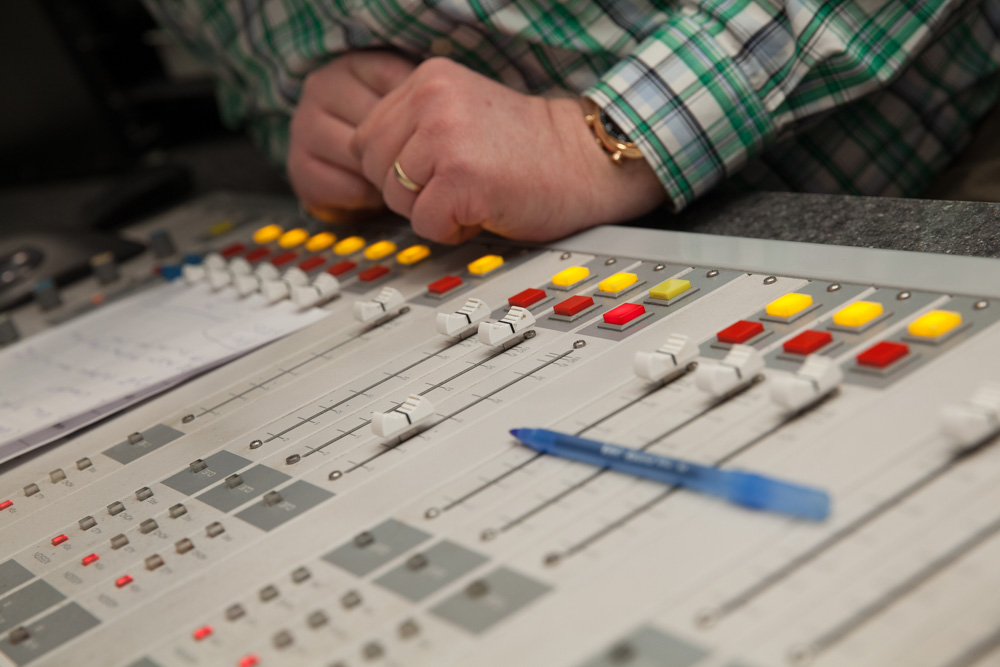 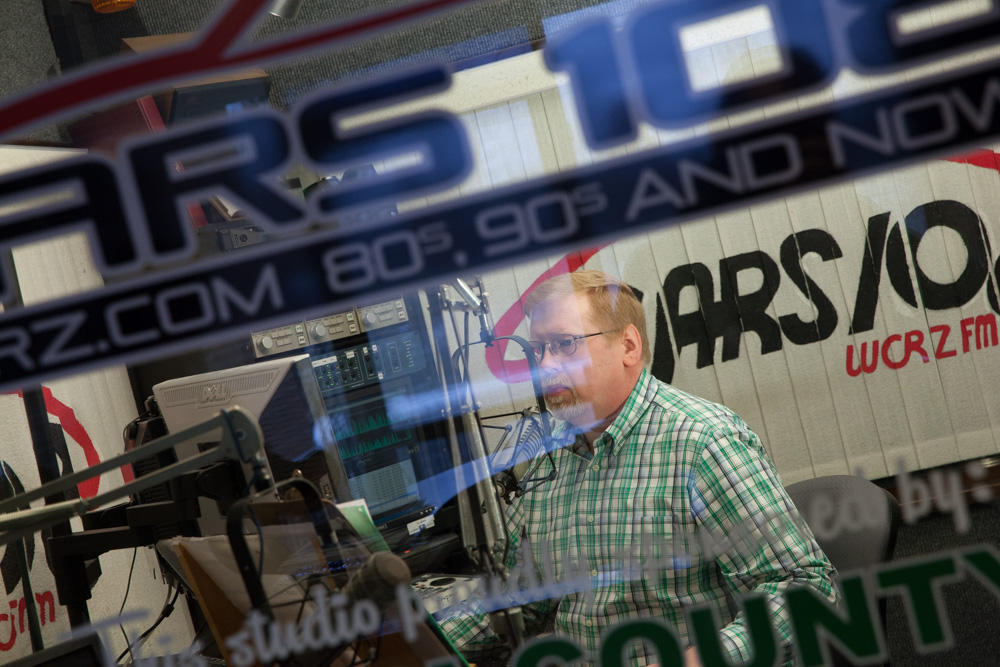 A self-described audio nerd, George pursued his interest by studying broadcasting at Central Michigan University and was offered a job with a radio station in Saginaw. He then became a deejay at CARS 108 and has been there for 24 years. “I started when I was eight,” he jokes. He is married to Denise and they have 18-year-old twin boys who will graduate from high school this year. Denise works at an elementary school and has four grown children.

As for George’s work days, they are hectic and interesting … but he wouldn’t have it any other way. He described to My City Magazine his typical day at the radio station.

George gets to the station at 8:30am and begins the day wearing his IT manager hat. “It’s a crazy day, today,” he says, as there is a pretty significant software update underway and “timing is of the essence” for a successful update. As IT manager, it’s his job to maintain the station’s computer system. Before 1998, the studio operation was completely manual – no computer assistance. George had a real hunger and interest for understanding the inner-workings of the computers, which is why he became the IT manager.

Also during the morning hours, George spends some time online perusing the news and current events to prepare for his afternoon show. “I like to know a little about a lot,” he says. One of the biggest misconceptions is that he only works four hours a day, while he’s on-air. As music director, he meets with the program director to make sure there is a balance between music and subject matter for all of the shows. He also prepares some short clips for the website. He usually gobbles down some lunch while working.

From 1-5pm, George is on the air working out of the control room, broadcasting music of the “80s, 90s and Now.” The control room is small, but all the equipment is within arm’s reach. He uses the main computer for the audio, but explains, “I’m a little old school. I like to run everything myself. My ego tells me I can do it better than the computer can.” He believes he is very fortunate to have a lot of input on the program material. “We can ad lib and put everything in our own words – there is no script, unless it is a special promotion or contest. I’m not much of a comedian, but I’ve been known to be sarcastic on and off the air,” laughs George. “I’m very random.” To get a conversation going, he often talks about a comment that was made on the Cars 108 Facebook page, whether it is on the air, on Facebook, or the station’s website. “I consider myself part of the conversation,” he says “I like talking about what other people are talking about.”

George usually leaves the station a little after 5pm, ready to enjoy spending time with his wife and kids. Both of his sons hold after-school jobs, but they all share dinner together as often as possible. George was recently engrossed in watching the Netflix original documentary, Making a Murderer, and he also loves the ABC series, Scandal. What he and Denise both enjoy the most, however, is spending time with their grandchildren. “We always love to babysit,” he smiles. “Having grandkids gave us the opportunity to fall in love all over again.”

Something people may not know about George is that he and his wife appeared on the television series Wife Swap a few years ago. The couple was chosen because they were known to be very frugal shoppers, taking advantage of sales and clipping coupons; but the couple they “swapped” with was quite the opposite. Though it was stressful, it was a positive experience and they saved the cash payment for their sons’ educations.

What does George like best about his job as a radio personality? “We have the greatest group of radio people ever assembled on the planet,” George boasts. “They are funny and irreverent, yet sincere and genuine. I’ve loved meeting so many people over the years. Our listeners are so receptive.”