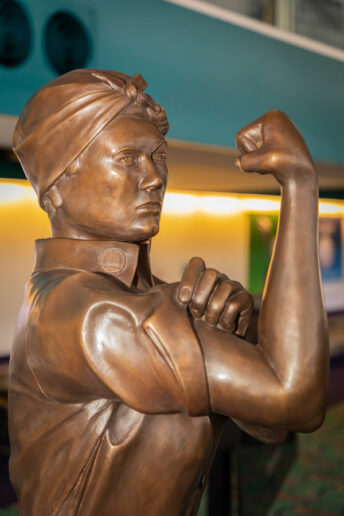 I love this issue’s cover! It’s a nod to Women’s History Month – “Rosie the Riveter” is the most recent installment in the Automobile Heritage bronze statue collection at Bishop Airport. Funded by Back to the Bricks and the Flint Women’s Forum, the statue is a symbol of women’s empowerment and American feminism. Rosie is the first woman depicted in the now ten-piece series of notable figures in Flint’s rich automotive history, sculpted by Flint artist, Joe Rundell.

Also honoring Women’s History Month is a piece on the Women’s Emergency Brigade. It’s a story of a group of determined women who played a key role in the UAW Sit-Down Strike and the fight for worker’s rights. Really fascinating!

When it comes to finding stories of people who step up to make a positive impact on the lives of their fellow citizens, Flint has a never-ending list of subjects. This month, we highlight Community Roots, a group of men deeply rooted in the city who decided to join their varied and valuable talents to foster a new level of meaningful conversations. Read “Engaging for Change” on p.18. Another “My Community” piece features Bishop Airport Chief of Public Safety, Chris Miller, and the distinguished law enforcement career from which he recently retired.

Heading Downtown, the expansion of the UM-Flint Murchie Science Building is nearly complete and truly fantastic! It will offer world-class educational opportunities and is one more thing our city can be proud of.

Sports is always a popular subject with our readers – we have two pieces this month. Be sure to read “Ready for the Next Level” about Flint native and pro golfer, Willie Mack III, and “A Family Tradition” about the 2020 Division 7 State Champion New Lothrop High School football team. Both are inspiring stories of perseverance and commitment.

Along with our great group of contributing writers, Team My City is committed to producing a top-quality magazine every month. Thanks for reading! 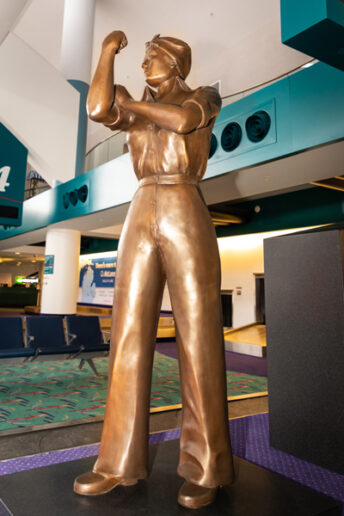 On January 29, with ABC12’s partnership, Back to the Bricks and the Flint Women’s Forum unveiled the tenth bronzed statue in the Automobile Heritage Collection at Flint Bishop International Airport. The collection’s first female subject, “Rosie the Riveter”was sculpted by local artist, Joe Rundell. Fundraising efforts for the piece were spearheaded by Back to the Bricks Executive Director, Amber Taylor, who presented to over 30 groups to procure funding. The Flint Women’s Forum organized a 5k Walk/Run this past June raising over $15,000 for the effort. “Women That Rock: A Rosie Radiothon” was hosted by Shea Automotive Group and 103.9 The Fox, pushing funding past the $40,000 goal.

The original Rosie is believed to be Geraldine Hoff Doyle of Michigan, who worked in a Navy machine shop during WW2, or Rose Will Monroe, a riveter at the Willow Run Bomber plant near Detroit. The image of “Rosie the Riveter” has become an iconic representation of the strength and fortitude of the working woman during WW2 and into today.

The statue will be viewed by the hundreds of thousands of passengers who travel via Bishop Airport every year. 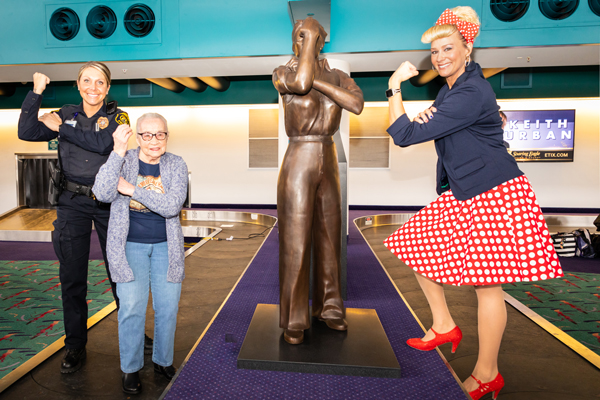