As a riparian, the month of August brings me a sense of urgency to spend every possible moment on the lake. Nights are cooler, the water temperature is dropping and it will soon be time to store the boats and cover the pool. Wow – each summer passes more quickly than the last. That’s not to say that I don’t enjoy fall and the return of football, sweater weather and the smell of burning leaves. But summer is not complete until Flint’s premiere events take place, which is great for those of us in the business of promoting all that’s hot and happening in Vehicle City. We’ll be at the Flint River Flotilla, Back to the Bricks, the HealthPlus Crim Festival of Races, and the Flint Jazz Festival that has a new venue this year. These events bring thousands of spectators and participants to Flint – so great for the city and for area businesses. Stay up-to-date on all the fun this month. 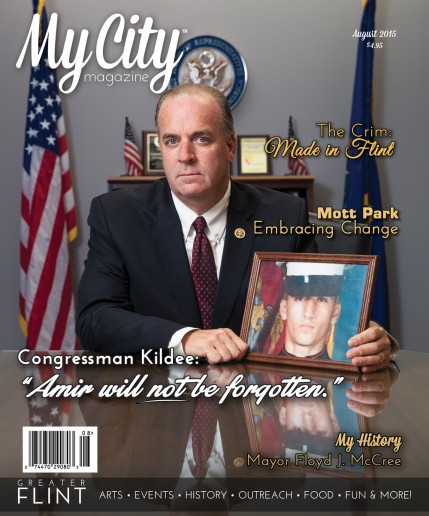 This issue is filled with entertaining content; stories of people who are gifted, giving and dedicated, photos of people enjoying life. But we don’t lose sight of serious issues that need illumination. MCM Staff Writer Cheryl Dennison spoke with Congressman Dan Kildee about his efforts over the past two years on behalf of Flint native, Amir Hekmati, who was arrested on false charges in Tehran and imprisoned nearly four years ago. As I write this letter, details of the nuclear arms deal between the U.S. and Iran have not been made public; however, as a patriotic American, I can’t comprehend an agreement that leaves countrymen languishing in an Iranian prison. My hope is that Congress reviews the terms and then demands release of Amir and two other Americans. I’ve known Congressman Kildee for over 20 years and admire his dedication – this story chronicles his fight to return freedom to one of Flint’s own. Thanks, Dan.

People are doing great things all around us. Be sure to read the article written by Mark Spezia about superstar athlete, Grant Fisher, a remarkable runner from Grand Blanc High School who has joined the ranks of the nation’s greatest and has a bright future. On the other end of the spectrum is Carol Fechik, RN, a woman who does great things every day at work in the ER at Hurley Medical Center. She is profiled in our “My Day” feature.

Our “College Town” series wraps up this month, and our ever-popular history features continue with a profile of former Flint mayor, Floyd J. McCree, who definitely made his mark. We also introduce another new feature – check out “My Flashback.”

Flashing forward to upcoming events, I hope you can share in the excitement! We will cover all the action in Flint’s only monthly magazine … we don’t miss a thing.

Hope you’ve had a fantastic summer so far. I’ll see you in My City!