When Michael, 54, Troy, 43, and Charles, 53, were locked up by the Michigan Department of Corrections (MDOC) prison system, a U.S. postage stamp cost 22-cents, a movie ticket was $2.75, and the internet and cell phones did not exist – but, for three Flint natives who entered a correctional facility in their 20s and served more than 90 years combined, life on the outside of prison walls seemed almost as scary as the first day they arrived in their eight-by-ten-foot cells.

“It’s a whole different world on the inside,” said Michael, who admits he was an angry, rebellious, authority-fighting “foolish punk” when he entered prison. “I went from boyhood to manhood in prison. It was live or die. I’m now in my 50s and going in felt like I was entering a foreign country; but in a way, coming out did, too.”

Sure, Michael, Troy and Charles managed life on the inside of prison, but life on the outside meant no job, no transportation, no income, no housing, no wardrobe, no furniture, no cell phone and often no family or support.

“I lost everything when I went to prison,” says Troy, “My house, car, job, bank account and family. Everything was taken away, but it was all of my own doing and I have only myself to blame. Getting out of prison was frustrating, because it’s slow-going to get your life back. There are so many barriers to knock down, but I’m working on staying the course. Transitional housing, the Re-Connections program, and Dennis Weinand have put me in a good place. I use the word ‘selfless service’ when I think of Dennis. He’s done everything to help me get to this point.”

Fortunately, the trio of recently released prisoners, along with 38 other men who exited prison – have a guide like Weinand, 53, who less than three years ago was the vice president of a successful Flint furniture store and never dreamed he’d be helping ex-convicts re-enter society. 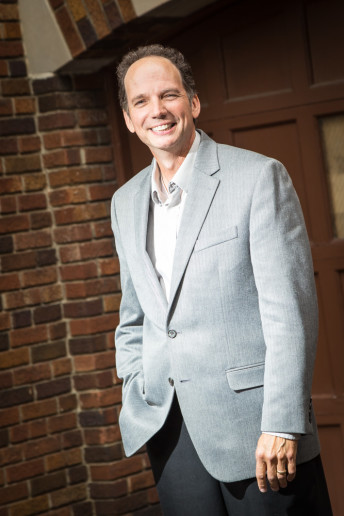 “This is my mission now,” says Weinand. “Helping post-incarcerated men return to society and their lives through a life-coaching, skills-training and job-placement program.”

In November 2015, Weinand launched Re-Connections, a non-profit which helps men released from prison, who are willing – and Weinand stresses the word willing – to follow strict attendance rules to accomplish a six-week course, to become established in society, and employed in the Genesee County community. The course includes a “work phase” where the men learn janitorial maintenance skills and are awarded a certificate upon completion.

“At the first session, we take the men to perform toilet cleaning duties,” says Weinand. “It’s been a great way to sort out those who won’t last. If they come back for the next class, it’s an indication that they have the drive to make it.”

Eventually, the graduates reach the job placement phase, which is exciting, and creates a sense of rejuvenation and success in the former felons.

Hiring ex-felons takes a courageous kind of business owner. DeVon Yelda, owner of Great Giant Supermarket of Flint, is one such employer. He knew about Michael’s incarceration and release.

“In my experience of life, we all make mistakes,” says the Detroit native who believes his own exposure to gangs have toughened him up, and he doesn’t put up with employees who try to take advantage of him. “I’m pretty tough,” he says. “I’ve hired at least four former felons in my business and I don’t regret it. We can’t judge someone on one mistake they’ve made – that one mistake can’t define the rest of their life.” Especially, he says, if they’ve paid their dues to society by serving time in jail or prison. “I find these guys come to me with a high work ethic, and their character is impressive. Michael, a graduate from Re-Connections is one of the most loyal, dedicated workers I’ve got on staff. He’s a great employee and we don’t need to talk about his past, because he’s working on his future, and I’m glad to be giving him an opportunity.”

On graduation day, the men are matched up with a life coach – a trained, male volunteer who agrees to mentor Re-Connections participants for six months. Life-coaches are men from all walks of life and experiences who volunteer to support the Re-Connections graduates, and reduce their likelihood of re-entering prison. Bureau of Justice statistics indicate five in ten offenders return to prison within three years of release. And sadly, seven in ten will be rearrested within five years. Weinand is slowly changing those statistics, though.

And, most Re-Connections grads continue communicating with their life coach after the official six-month commitment expires. “I talk to my life coach a few times a week and also meet him every other week,” says Troy, who is grateful to his life coach and his employer, a molding-manufacturing company in Howell.

Bill Lucio, who lives in Saginaw and once was in and out of jail for a seven-year stretch of his life, serves as a life coach for two Re-Connections graduates. “I’m living proof that you can change,” says Lucio, who was mentored by a chaplain in jail who never criticized him, but kept encouraging him until he found his way back to stability. Her unyielding sense of hopefulness reached Lucio’s empty heart and made a difference in his choices. “It’s all about building relationships with these guys. If you criticize them, then the relationship is at risk. I understand this better than anyone. As a life coach, I encourage the guys, keep them focused, and I’m always here to listen and offer new ideas for them to try. I model my approach after the chaplain who helped me.” 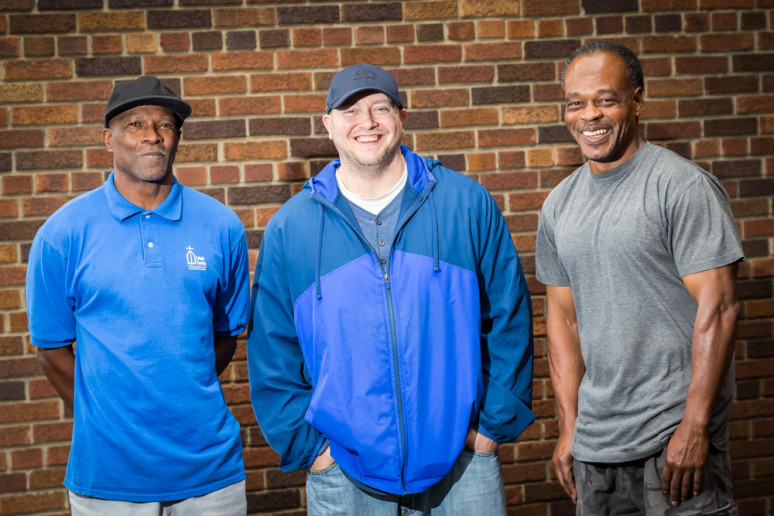 In the Re-Connections classroom in the basement of St. Michael’s Church – next door to Catholic Charities on Fifth Avenue in Flint, where Weinand teaches and gets support from people like Vicky Schultz, director of Catholic Charities – framed photographs of the nine graduating classes of men are displayed on a shelf.

“I was so excited Dennis found his way to my office,” says Schultz. “Catholic Charities and Re-Connections has made a great partnership and together we’re helping so many gentlemen reintegrate back into society. We’re moving them in a positive direction through assisting them with jobs, housing, personal-need items and counseling. The program is in its infancy; after only two years, its outcome and success rate is well over 83 percent. This is evidence for us to continue building this program. We’re excited about continuing our collaboration with Dennis and his Re-Connections program, and ultimately to help more men.”

Weinand and Schultz are in the business of restoring hope to individuals who need it.

“If someone had told me three years ago I’d be teaching post-incarceration men job skills, resume-writing, character-building, how to organize their finances and leadership skills, I would’ve laughed,” says Weinand, who first felt the desire to mentor former inmates years ago, when he agreed to coach one individual. “God has ignited my passion by putting people and opportunities in front of me that have evolved into what Re-Connections is today. I remember sitting in a coffee shop sketching our ideas on a napkin and wondering how we were going to pull it off.”

The model for the program he sketched back then has morphed into something beyond his imagination – but there’s still so much work to do. A recent grant from the Ruth Mott Foundation will help with that work.

“Over 500 men will be released into Genesee County this year alone,” says Weinand. “Sure, we’ve helped 41 of them, but we need to reach out to more men.”

Most class participants come from the MDOC and prior graduates – ex-felons who are now employed and have housing, furniture and clothing – help market Re-Connections better than anyone else. They believe in Dennis Weinand, simply because he was the first to believe in them.

“I was a broken mess,” says Charles, who was part of the very first graduating Re-Connections class, and worked inside the prison system as a legal appeals writer, has recently landed with the maintenance department at Catholic Charities. “I’m thankful for this opportunity. I’m working on being and doing my best at life on the outside. I’ve come a long way, and I’m motivated to help Dennis and the Re-Connections program become more valuable to the new guys coming into it.”

Michael, part of the fifth graduating class and employed in the meat department at the Great Giant Supermarket in Flint, remembers meeting Weinand for the first time. “He was such a genuine guy,” says Michael. “He shook my hand and hugged me. I’ll never forget that. I was in prison so long, I’d forgotten what that was like. Everything was so negative there. Sure, I was skeptical at first, but I immediately liked him and knew he was sincere and genuine. I don’t use those words often.”

Lucio says it’s an honor to see the guys all dressed up, wearing suits and ties on graduation day and getting jobs. “When you put something good in someone’s life and it helps them, well, they just want to continue with it. That’s what Re-connections does for a person.”

“We’re just scratching the surface,” says Weinand. “As long as we get men coming to us who are willing and persistent about changing their lives, then we’re going to do everything we can to help them reach their goals. Change will come, one willing man at a time.”

For more info or to support Re-Connections, visit re-connections.org