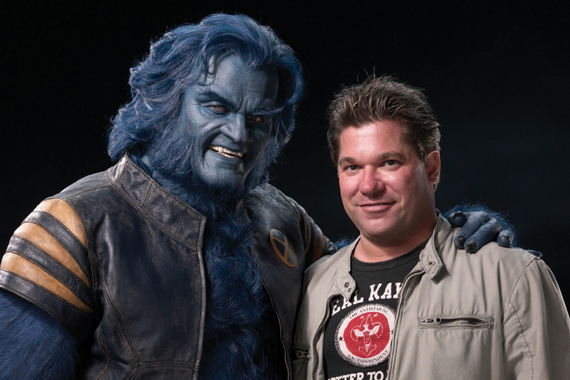 Hollywood Producer David Gorder enjoyed a simple Midwestern childhood in Genesee County. Little did he know, this boy who was captivated by all things film-related, that his name would one day appear on the silver screen.

“I grew up in Davison,” Gorder recalled, “but both my parents were raised in Flint and my mother worked for the city, so we attended many civic functions there.” David remembers going to exhibits at the Sloan Museum, shows at Whiting Auditorium and the Shrine Circus. “I loved the Flint Coney Island restaurants like Angelo’s, and still do, although I haven’t been back to Flint in many years,” David added, but what he most remembers about his youth is his love for movies. “I loved going to the movies at Genesee Valley Theaters. I was always fascinated with movies and the movie-making process when I was a kid, but I didn’t think I would have the opportunity to work in the business; it just didn’t seem practical.”

Practicality prompted Gorder to pursue a career path in creative advertising, although he excelled in the film classes he took at the University of Michigan as an undergraduate student. “When I went to UM, there was no film program per se – only film studies classes within the Communications Dept.,” he remembered, “but Frank Beaver was my advisor and mentor. He kept my love of film burning: I was always transfixed as I sat in his lectures.” After graduation, David moved to Chicago with the intention of pursuing his advertising career. “I was living in Chicago and working in the finance business fresh out of college. I also waited tables on the weekends to supplement my income. Ultimately I never did get a job in advertising,” he laughed. Since David was reluctant to chase Hollywood, Hollywood came to him. “I met a waiter friend who got a job as a production coordinator on a big studio movie shooting in Chicago in the summer of 1996,” David said looking back. “I started hanging around with the movie crew on that film, networking and making friends. I even volunteered to do production assistant work to get experience.” His networking paid off, as Gorder soon after got a job as a production assistant on his very first movie, My Best Friend’s Wedding, which also filmed in Chicago. “It was my big break and it was a stroke of luck,” he said.

After that, David Gorder was hooked. “I moved to L.A. to pursue producing after My Best Friend’s Wedding,” he said. His first credit as producer appeared on X2: X-Men United, and today, the X-Men series, which he produced in conjunction with Bryan Singer, is what he is best known for. On May 23, the latest movie in the series, X-Men: Days of Future Past, will premier in theaters. Based on the 1980 X-Men comic of the same name, the storyline involves a dystopian future where mutants are enslaved, and Wolverine must travel back in time to stop an ominous (David’s hint: robotic) threat, which would destroy all mutants, from being built. “I am confident this will be the best film in the series and a spectacular blockbuster,” said David, who did admit, however, that he will always have a soft spot for X2: X-Men United.

While the role of a producer can involve logistics management – budget, shooting schedules and physical production elements – Gorder says he enjoys the creative elements of producing: overseeing the story, supporting the director’s vision, the casting of actors, etc. For “passion projects,” as David calls indie films, which are independently produced, and not those produced by big film studios, the producer must do double-duty. “On low budget indie movies, these two sides of producer responsibilities tend to merge,” David reported, “and they also often include finding financiers or investors to fund your movie.”

As David’s list of accolades continues to grow, so do his dreams and visions. Projects on his radar include a new horror flick, a possible HBO film, and a comic book hero television series. “Those who are wise in the changing movie industry recognize that great stories and characters are moving to television,” David warned, “and so one of my newest projects is for TV. In fact, for what I want to do, a TV series lends itself better to exploring the comic book character’s rich history.” With so many aspirations and opportunities before him, David says that being a producer can be exhausting. “You have to be a diplomat and a salesman all the time,” he said but he was quick to add that there is nothing more exhilarating. “I can’t imagine doing anything else except movies,” he said, “and although it’s a game with extreme highs and lows, once you have the freedom to be this creative, you don’t want to do anything else.”

Q: Is Hollywood as glamorous as they say? As a Midwesterner, what was your biggest adjustment?

A: Hollywood glamour is illusory, just like the movies. Movie sets are not at all glamorous. They are really like a circus, albeit with really expensive camera equipment and technology. It’s a business like any other. The objective is to create a product that people want to pay money for – to entertain themselves. Most people in Hollywood work long hours in unglamorous jobs. Coming from the Midwest, the biggest adjustment is learning to accept the level of superficiality of Hollywood. Many people in the entertainment business are not genuine. It’s hard to find a core group of friends you can trust and count on through thick and thin.

Q: What actors/actresses have you come to know well throughout your career?

A: I’ve been lucky to have worked on four X-Men movies and in the course of working on these films, I’ve become close with the actors. Halle Berry, for example – beautiful inside and out. She’s a doll. We hit it off right away because she’s from Cleveland, a fellow Midwesterner. Hugh Jackman – another wonderful person – fame has not changed him; he’s very generous and kind. Sir Ian McKellen and Patrick Stewart are both warm and intelligent, and so much fun to spend time with. James Marsden and Shawn Ashmore are my good friends, as well. I am blessed to call these talented people my friends.

Q: Who is your favorite actor/actress?

A: I love Cate Blanchett and I love Michael Fassbender. I’ve worked with both of them and I am in awe of their talent and humility.

Q: What is your favorite movie?

Q: What producer/director do you admire? Why?

A: I really admire Quentin Tarantino. He takes creative risks that no one else in Hollywood will take. He’s an expert at storytelling and character.

Q: Do you like to read? How do you feel about the great book vs. movie debate?

A: I am an avid reader. I love great books. I am currently reading “Missing You” by Harlen Coben. Brett Ratner’s company RatPac has optioned the movie rights to this book. It’s a taut mystery-suspense thriller, and it will make a great movie. As long as a visionary storyteller (director) and screenwriter are hired and embrace the novel and its story, I believe a movie version of a book can be just as good as the book. The Harry Potter series is a good example. All of those movies were brilliantly translated from the page to the screen.