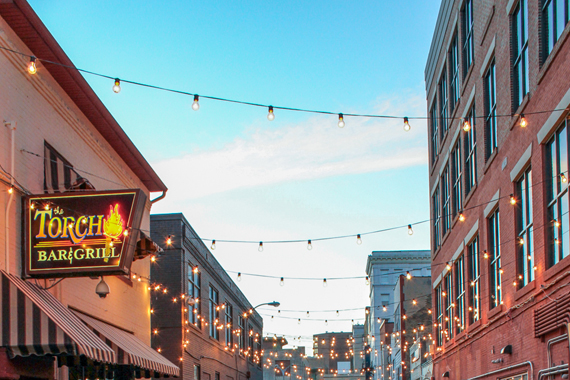 Where can one find live music, chalk art, graffiti art, people dancing with electronic hula-hoopers, welders, vendors and zombies at the same place and at the same time? Why, Buckham Alley Fest, of course!

Now in its third year of awesome, the 2013 Downtown Flint Buckham Alley Fest was a riotous rumpus on the Saturday evening of July 13. The annual Alley affair is quickly becoming one of Downtown’s most celebrated occasions, and it is one of those rare occasions when the application of the old maxim “everything but the kitchen sink” seems appropriate. An impressive concoction of culture and art makes for an exciting time.

Buckham Alley Fest is the brainchild of a handful of notable individuals who are heavily involved in Flint’s revitalization, namely Kathleen Gazall, Chris Everson and Tracey Brewington. They were joined by the likes of Mike Melenbrink, Elisabeth Saab, Chad Hansen, and Marcus Papin to form the Friends of the Alley nonprofit organization. Papin explained that one of the group’s main goals is “to create a pedestrian friendly alley on nights and weekends to help emphasize the great businesses in town and to expand off S. Saginaw Street.” This celebration of arts is modeled after summer music festivals and is free to the public. Funds are raised each year through sponsors, donors and vendor fees. Nick Gardner of Ebony Gemstone Co. was one of the evening’s vendors. He was thankful to have the opportunity to participate in Buckham Alley Fest and sell his art to attendees. “I love events like this,” he said. “I just like to talk to the people since it’s a nice meet-and-greet. You see a lot of people and things that you wouldn’t normally see on a day-to-day basis.”

There were over 60 vendors present, and it is estimated that nearly 3,000 people walked about the Alley over the course of the event, which went from 6pm to midnight. Chris Russell of Flint was a newcomer to Buckham Alley Fest. Speaking on what he liked most, Russell said, “I heard about it before but this year I was able to make it. With all the negative things said about Flint, it’s nice to see that good things do happen in the city. It’s black, it’s white, everybody’s having a good time, and there’s no drama out here.”

The Friends of the Alley look forward to Flint alley festivals expanding in time. Brush Alley, between East Third and East Second Streets along the side of the Capitol Theatre building, is being considered as an additional location. Papin says that the committee is excited to make the alleys of Flint more like those “in one of the big metropolitan cities that serve as a meeting place for people and not just a place to drive your vehicle through.” Considering the growth rate of Buckham Alley Fest, the back roads of Downtown could very well become the future settings of street festivals for years to come.

Are you interested in purchasing photos from this story? Go HERE and select the “Buckham Alley Fest” category.