The crowd surrounded the basket, taking practice puts and warming up for the Disc 4 Arts charity tournament to benefit the Flint Institute of Arts. Competitors were diverse, of all skill levels and ages, and excited to play the temporary urban course created on the grounds of the Cultural Center and Central High School. After taking a number of practice throws, golfers headed to their designated starting holes and with two blasts of an airhorn, the Disc 4 Arts tournament began.

Participants belong to a welcoming group of enthusiasts who share a passion for the sport of disc golf. In recent years, the disc golf community grew by leaps and bounds in Michigan and around the country due to the efforts of numerous grassroots organizations and volunteers. In Genesee County, Paul Grasso and the Flint Town Flyerz (FTF) are at the center of it all. 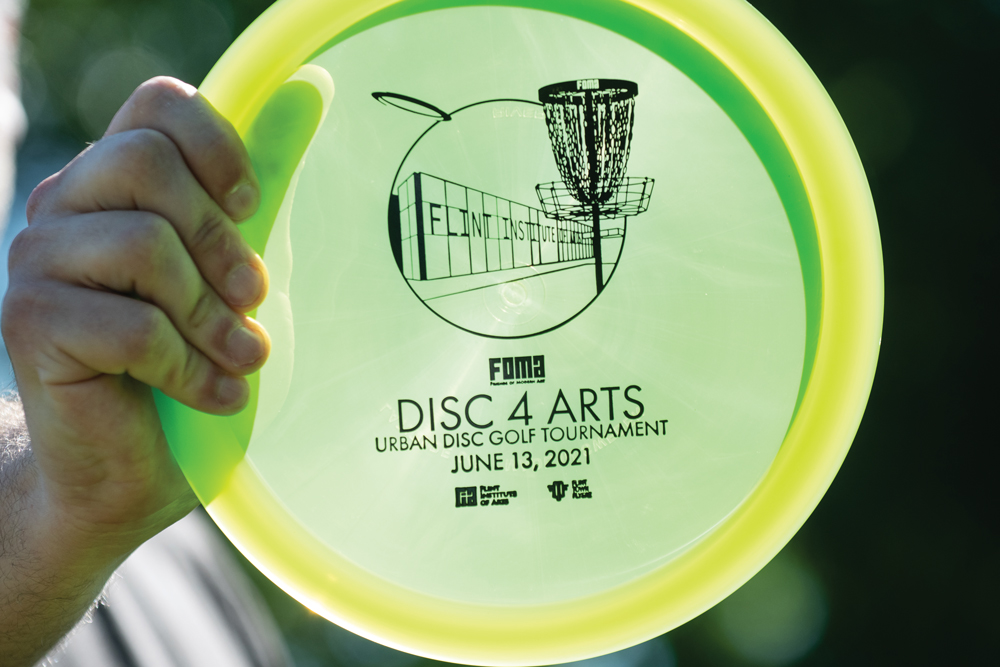 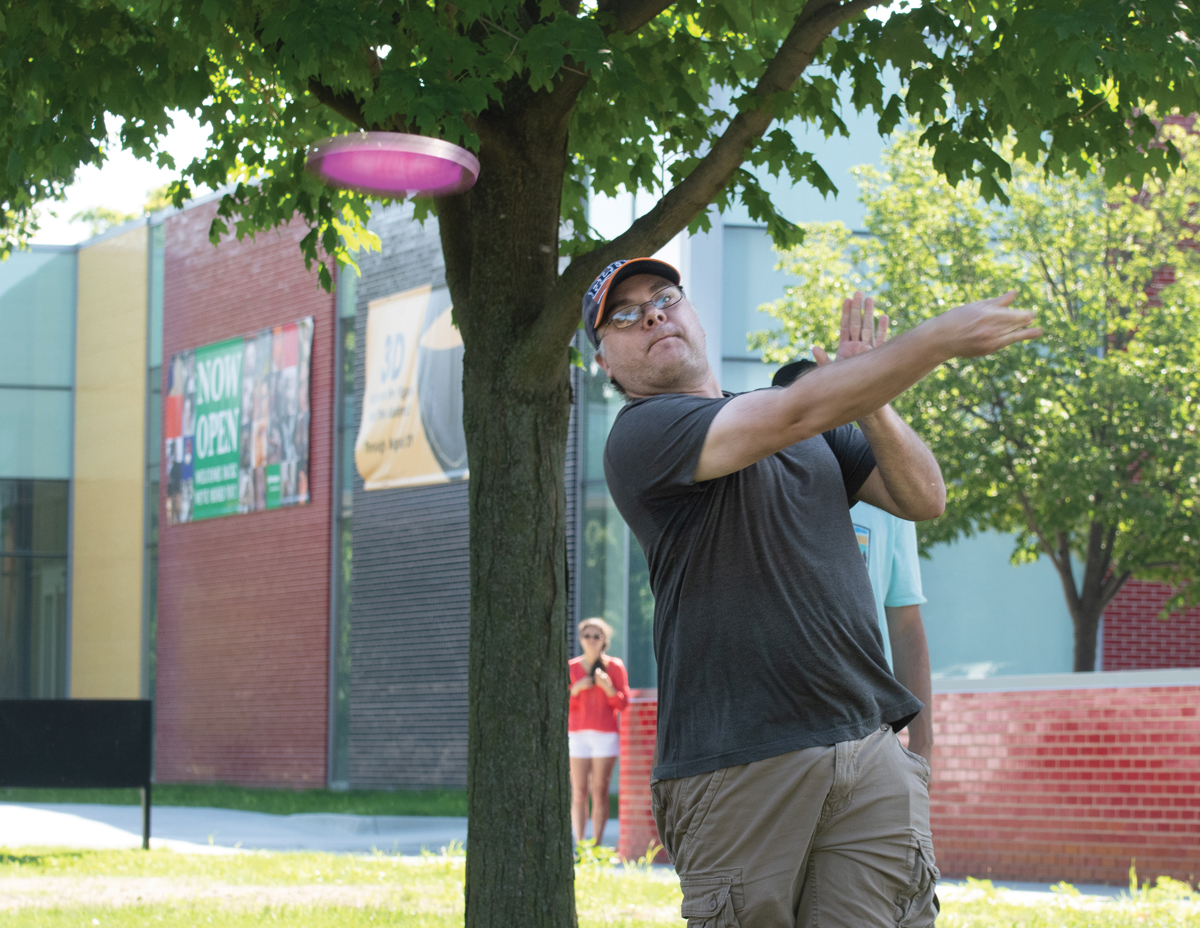 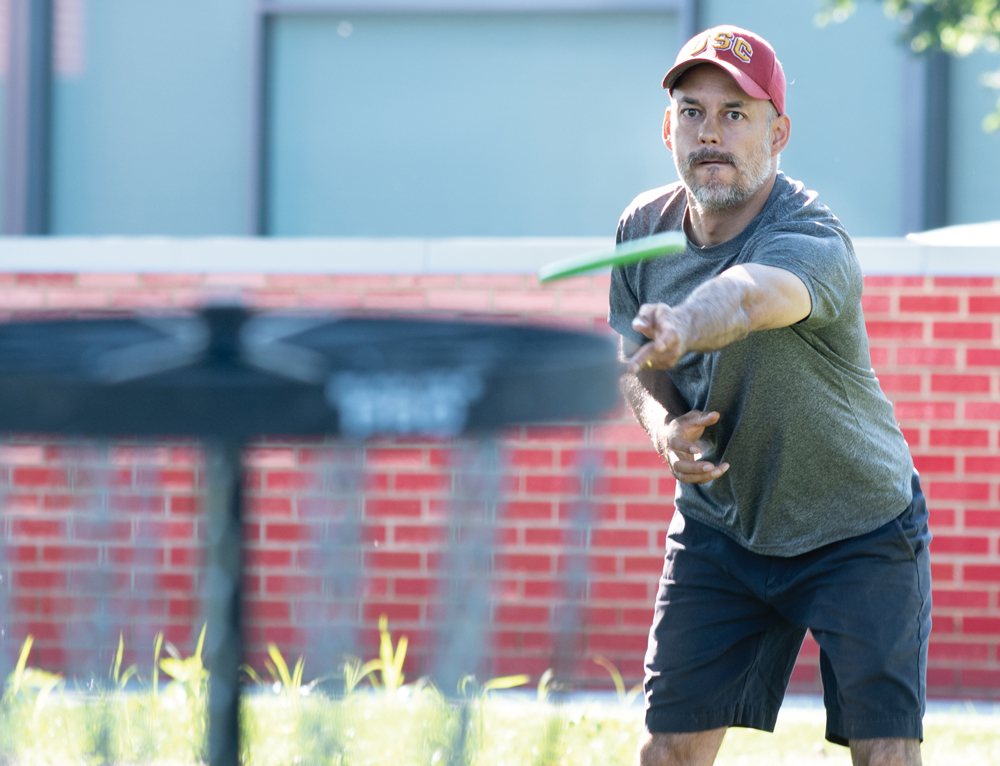 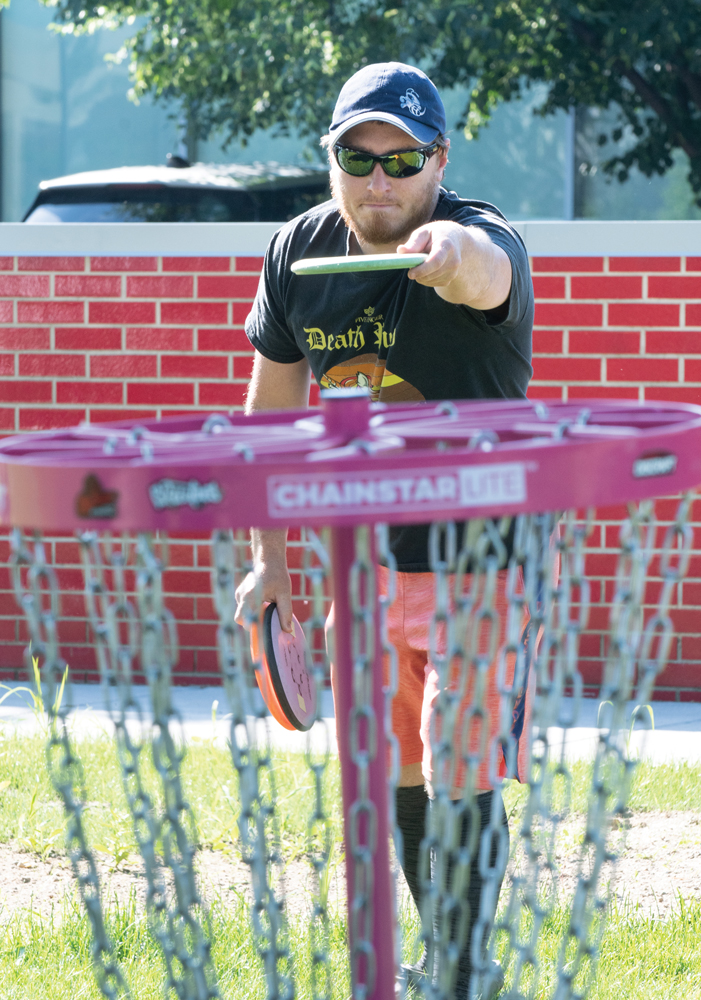 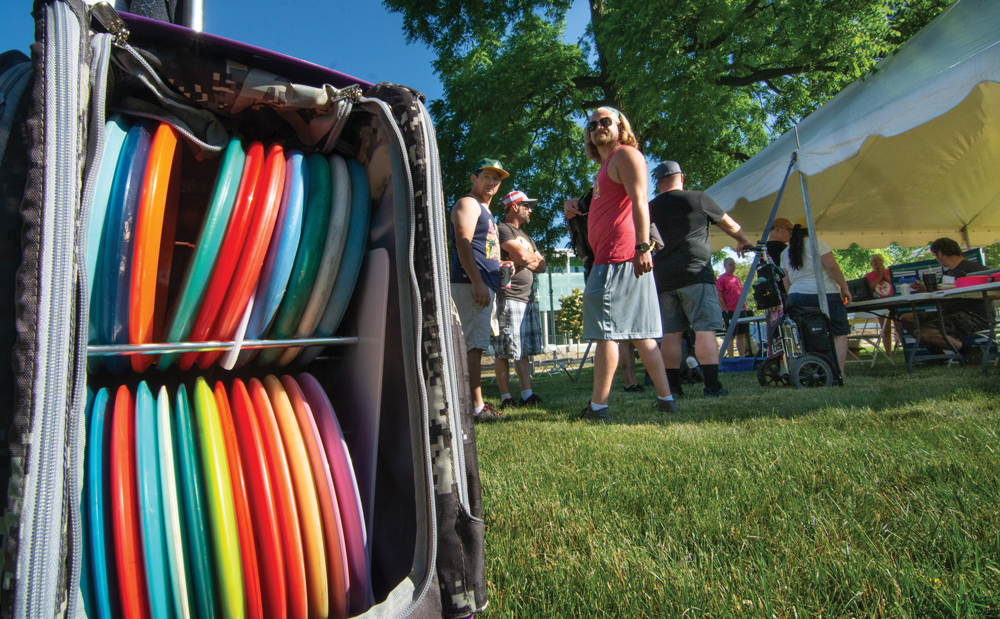 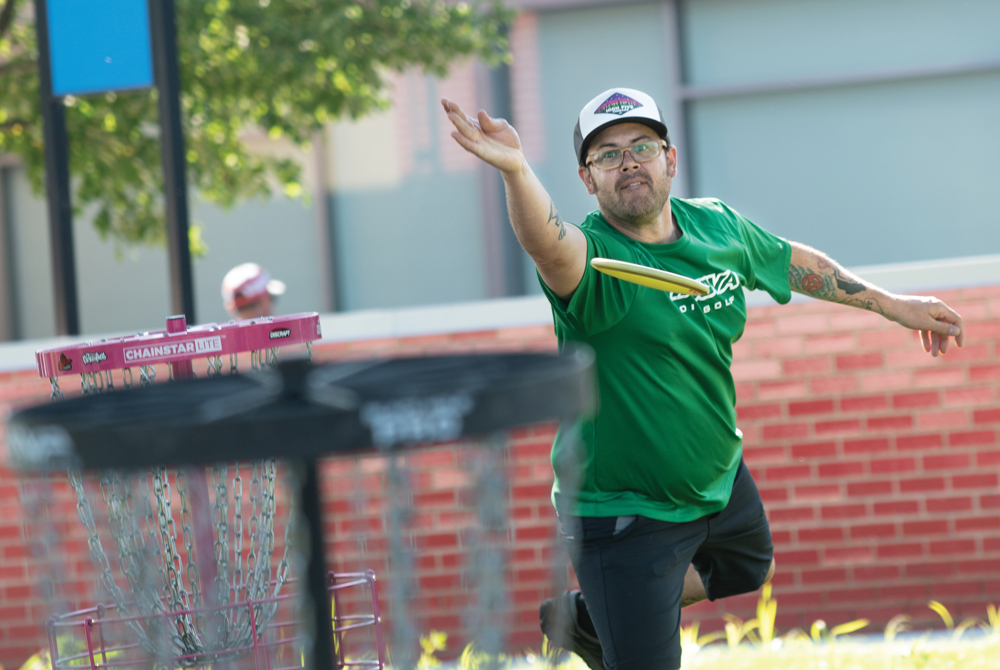 “We formed Flint Town Flyerz in 2007,” says Co-founder and President, Paul Grasso. “We started running leagues at Goldenrod in Davison and the Holly Woods course in Holly. Personally, I fell in love with the sport on a business trip in San Diego around 2001 and when I got back to Genesee County, there was nothing here. I spent a lot of time traveling to a few courses in the state. When Goldenrod Disc Golf Course was built in 2003, that’s when things really took off in the area.” Four years later, Grasso and fellow throwers Mark Stephens, Gary Chalice, Dave Lonteen and Jeff Moellering founded FTF. 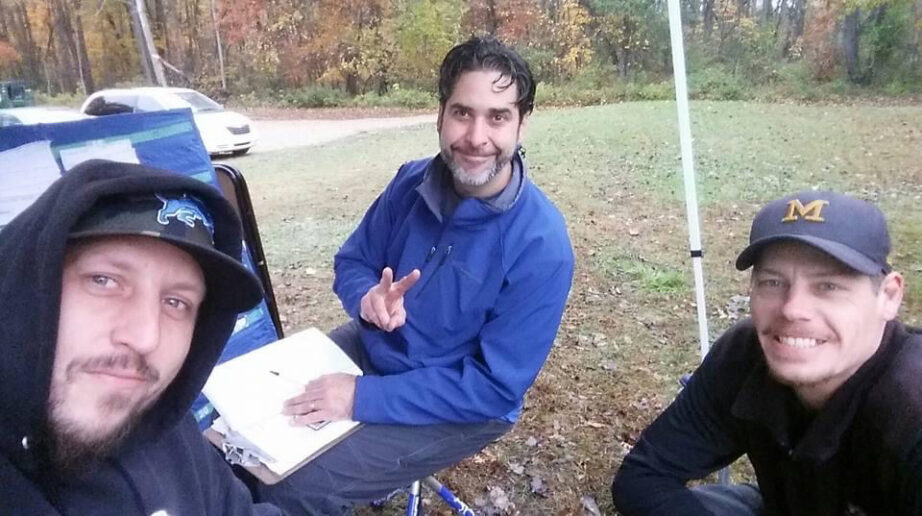 “The disc golf community is fun and welcoming. Since the beginning, our main goal was to grow the sport and it’s really coming around now.”

Recognized by the Professional Disc Golf Association (PDGA), FTF follows the organization’s rules and regulations of the sport. The majority of the FTF are PDGA members of amateur status but a PDGA membership is not mandatory to join. (The PDGA is the national membership organization and governing body for the professional sport.) The FTF runs three leagues in or near Flint (Goldenrod, Mott Park, Holly Woods), hosts four annual PDGA sanctioned events for PDGA Michigan Amateurs and professionals, and participates in and hosts charity events such as the recent Disc 4 Arts event in Downtown Flint. 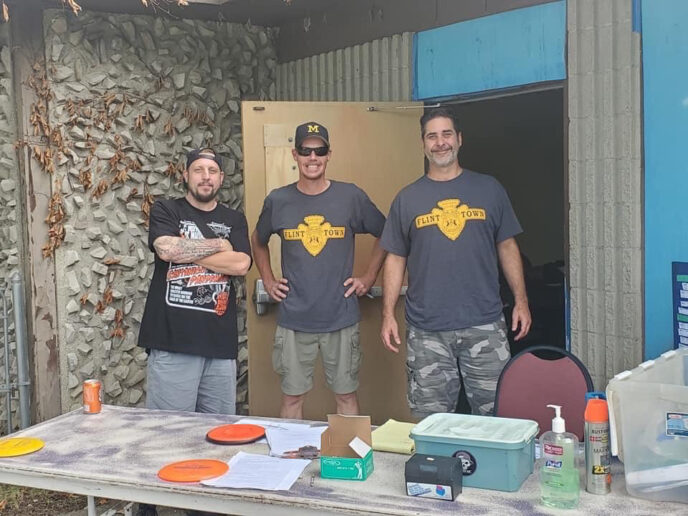 As the sport continued to slowly grow across the country and membership in the FTF continued to increase, Grasso and his colleagues looked to expand course offerings in Flint. “After a while, we began collecting dues to build a development fund for a new course,” remembers Grasso. “We talked to the city and the board at Mott Park and our plan for a course was accepted. We were able to contribute $5,000 to the project and that amount was matched by Kettering University and the Community Foundation of Greater Flint.” Grasso and the Flyerz got to work.

With help from FTF members and Kettering students, and designed by Grasso, Myles Nakamura and Mark Stephens, the Mott Park Disc Golf Course was established in 2017. The FTF began league play at Mott soon thereafter. Volunteers continue to maintain the course and Grasso now sits on the Mott Park Board. The group then expanded their role to include hosting national amateur events and pro-ams.

“Our annual events bring highly skilled players to the area and every year, we get more and more players,” informs Grasso. “We host the Michigan Amateur Open at Holly Woods (June), the Vehicle City Open at Mott Park (July), the Flint Town Flyerz Open at Mott Park (August) and the Goldenrod Championship in October.” The winner of three of the four events often qualifies for the Michigan State Amateur Championship held in September in Ludington. 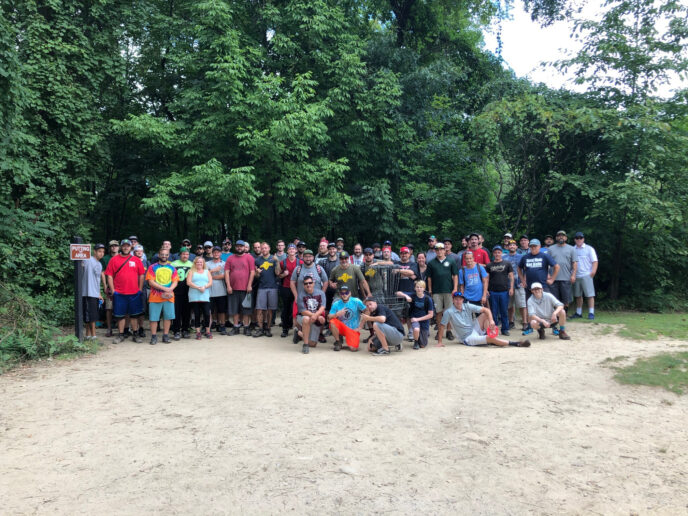 In the last year, disc golf has exploded. Stuck at home during the pandemic, people were looking for more things to do outside and disc golf was the thing. “It’s a socially-distanced hobby and very inexpensive,” says Grasso. “Most courses are free and discs are affordable. For me, disc golf is a sanctuary from everything that is happening outside of my control. It’s great to be out in nature trying your hand at something different. It’s unbelievable how quickly it has grown in such a short time.”

Currently, the FTF are working to install a new course at Sorensen Park in Holly to accommodate the influx of new players. “Holly Woods has just gotten so busy, we thought that Sorensen Park was a great place for a new course. If Holly Woods is full, players can head right down the road. It should be ready next spring,” adds Grasso. Another local organization is building a new course in Swartz Creek off Bristol Rd. The Otterburn Disc Golf Park should open in 2022. FTF also plans to bring back their kids’ day at Mott Park later this summer and host their annual Frozen Flyerz charity event in February. “In the past, Frozen Flyerz has benefitted the Food Bank of Eastern Michigan and Flintkids.org,” says Grasso. “In five years, we have raised over $13,000 for the organizations.” 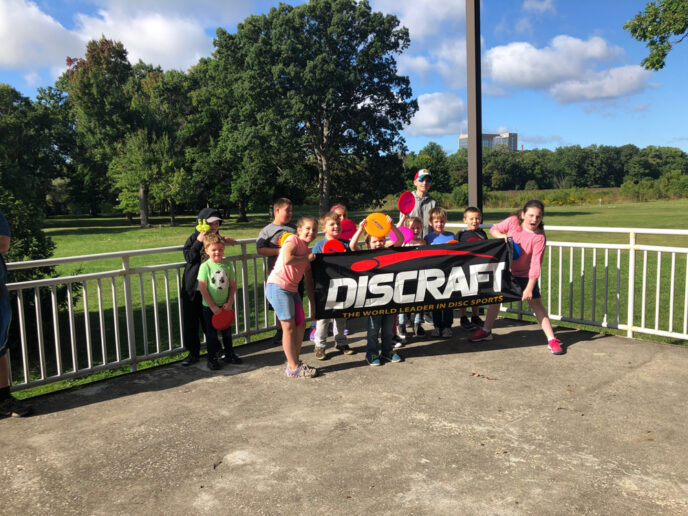 The thing that Grasso loves most about the FTF and disc golf is the community and friendships. “The disc golf community is fun and welcoming. The friendships I have made are priceless,” he says. “We are willing to help out any beginner. Since we started, our main goal was to grow the sport and it’s really coming around now.”

If you would like to join the Flint Town Flyerz, are interested in participating in a league or volunteering in their endeavors, meet the group at a league night held on Mondays at Mott Park, Tuesdays at Holly Woods and Thursdays at Goldenrod.

When Ed Headrick invented the Frisbee in 1957, he had no idea what its future held. Dubbed the Father of Disc Golf, Headrick fell in love with his invention and worked hard to promote its use across the nation. The sport of disc golf was possibly started in 1970 in Rochester, NY by Jim Palmeri and his brother. In 1974. They held the first national tournament dubbed the American Flying Disc Open and awarded the winner a new 1974 Datsun B210. Headrick quickly capitalized on the sport’s newfound fame and invented the Disc Golf Pole Hole in 1975. That same year, he installed the first disc golf course at Oak Grove Park in Pasadena, CA. He founded the PDGA in 1976 and used membership dues to build multiple new courses and hold events.

The biggest turning point for the sport was organized by Headrick in 1979 when the Wham-O $50,000 Disc Golf Tournament was held in Huntington Beach, CA. Made available only to those who qualified by winning smaller events around the country., the tournament was won by player Tom Kennedy.

In 1982, the PDGA sponsored the first Disc Golf World Championships in Los Angeles and in 1998, the amateur and professional rating system was established. Now based in Atlanta, GA, the PDGA boasts a membership of over 70,000.