Perspective in America began to shift in the ‘90s. While the ‘80s represented the self and the actualization of domestic concern, leadership in the ‘90s began to look outside the border and beyond. In 1990, NASA released the Hubble Telescope into orbit to gain an unobstructed view of the universe and its deployment has been integral to our understanding of the universe. On our planet, 1990 began a turbulent time when Iraq, under the leadership of Saddam Hussein, invaded the neighboring country of Kuwait. This led to Operation Desert Storm the next year, which ended quickly after only 100 hours of ground fighting; but it began a period of major U.S. involvement in the Middle East that would stretch far into the future. Immediately following Desert Storm, President George H. W. Bush found himself in a two-front political war at home. The 1992 Presidential election pitted incumbent Bush against Democrat Bill Clinton and upstart, Ross Perot. Clinton emerged victorious. The next year brought tragedy with the bombing of the World Trade Center in New York which killed six, and then the WACO disaster that took 76 more lives. The first half of the decade ended in more foreign policy with the creation of the North Atlantic Free Trade Agreement (NAFTA).

Foreign policy continued in the later half of the decade with the creation of the World Trade Organization (WTO), the extension of the Nuclear Non-proliferation Treaty and the passage of the Iraq Liberation Act. Sadly, the year 1995 shocked the country with possibly the biggest occurrence of domestic terrorism to date, when anarchists bombed the federal building in Oklahoma City killing 168 people. In 1996, Clinton defeated Bob Dole and again, Perot, to hold onto the presidency. Clinton would run into legal issues when the Lewinsky Scandal broke in 1998.

As the U.S. looked to fix issues outside of its borders, the City of Flint looked outside of theirs for a different reason – the city was desperately searching for help. The 80s left Flint with shuttered, broken factories, brownfields, low employment, high crime and an absent tax base. The ‘90s were spent holding onto what Flint once was and looking for an outside benefactor to continue the illusion. City leadership enacted a community-wide plan to pull jobs back in a last-ditch effort to remain “The Vehicle City.” Come back to Flint in the 1990s. 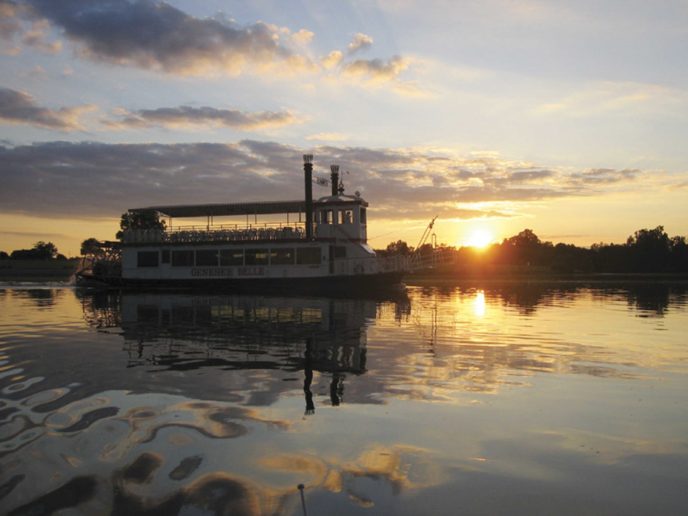 Since 1886, when Billy Durant and J. Dallas Dort put the finishing touches on some of the first carriages to roll down Saginaw, Flint was known as “Vehicle City.” The founding of General Motors in 1908 cemented that distinction throughout the world. Millions flocked to Flint to get into the automobile and vehicle industry, in hopes of living better lives. The city brought innovation, luxury, horsepower, quality and style. Flint helped win World Wars, pushed workers rights and in many ways, created the middle class. GM and Flint were hand-in-hand throughout it all. When the 1990s hit however, the relationship was finally ending. GM had left Flint behind and was moving out. Just as the ghost of Billy Durant, from his original office, sadly watched the shuttering of Factory One in 1987, those remaining in the city hung their heads sadly with their futures unknown, as the factories they called home were shut down forever. At the close of the decade, Flint would be known as “Vehicle City” only in memory. 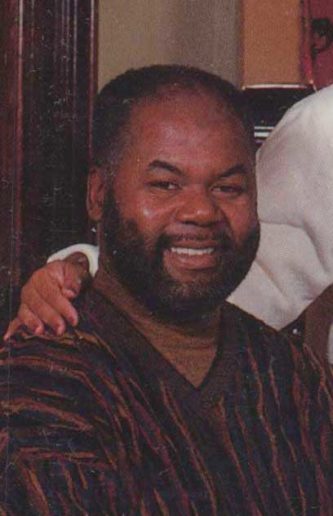 Woodrow Stanley defeated incumbent mayor David Collier in 1991. He went on to have a long but tumultuous term as Flint’s leader.

In 1990, the nation found itself in another recession. GM CEO, Robert Stempel, continued to follow the plan of his predecessor, Roger Smith – one of subtraction and consolidation. GM had just closed Flint’s Factory Two and then two years later, shuttered the Van Slyke Engine Facility. In 1970, GM employed nearly 80,000 in Flint; by year 1992, GM employed 50,000 … and it still wasn’t enough. GM had not rebounded. Stempel was ousted on a vote of no confidence and replaced by Jack Smith (no relation to Roger). Smith began a massive overhaul of GM and its management structure. He tore down that of Alfred P. Sloan and the company’s old guard. General Motors was no longer tied to Flint by facilities, structure or personnel.

As jobs continued to be lost, the population of Flint grew frustrated. Mayor David Collier went into the 1991 mayoral election with a despondent electorate. He had balanced the budget, yet never produced results that would help the populace. Collier lost the election to Woodrow Stanley. At first, voters had high trust in Stanley’s ability to lead the city to prosperity. In 1995, he defeated businessman Don Williamson by a landslide, but soon thereafter, confidence abated. The city continued to falter and the budget situation became worse as jobs disappeared. He won the 1999 election over Scott Kincaid by less than 1,000 votes. His time was growing short.

To be economically feasible, Flint needed to retract and become smaller. Schools were beginning to empty and costs were rising. In order to reduce cost, Lewis Elementary was closed in 1991 and Lincoln Elementary was closed only to become the International Academy of Flint in 1999. In 1992, Atwood Stadium was shut down due to poor field conditions for the first time since its construction in 1929. It would reopen in 1995 after making over $2 million worth of improvements. Many thought the city cursed when in 1993, on its maiden voyage, the paddlewheel riverboat, Genesee Belle, sunk in Mott Lake in eight feet of water. 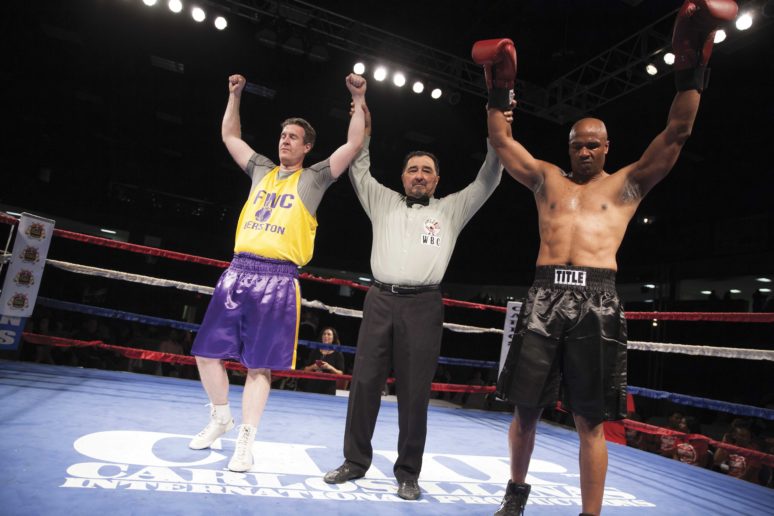 In 2015,Chris Byrd boxed Flint Mayor, Dayne Walling in a “Knock Out Kidney Disease” celebrity boxing event. In 1992, Byrd won the silver medal in the Barcelona Olympics. He went on to be a two-time heavyweight champion, winning titles over Vitali Klitschko and Evander Holyfield beginning a championship boxing tradition in Flint that continues today.

The situation in Flint was getting rough, but people still found a way to succeed. In 1991, rapper MC Breed and Da Flint Crew broke out with “Ain’t No Future in Yo Frontin,” reaching No. 66 on the Billboard Top 100. Soon thereafter, the legendary Dayton Family released hits of their own. In 1992, local boxer Chris Byrd won the silver medal at the Barcelona Olympics. He would became a two-time boxing heavyweight champion, with victories over Vitali Klitschko and Evander Holyfield. Flint’s boxing tradition was back and continues today, with championship boxers Tracy Byrd, Andre Dirrell, Anthony Dirrell and Claressa Shields. The early half of the decade produced State Championships for Flint schools in women’s basketball – Flint Bendle won in 1991, Powers Catholic in ‘91 and ‘94, Northwestern in 1993 and Northern High in ‘94-95. 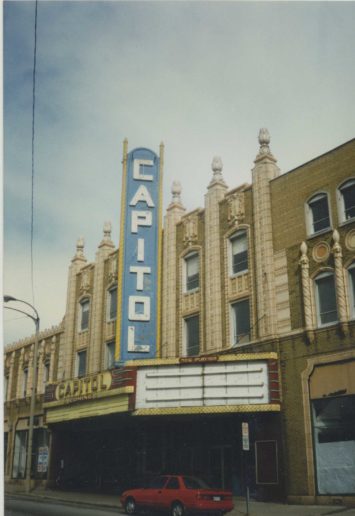 An entertainment mainstay since 1926, The capitol theatre would close its doors for good in 1996.

On July 6, 1995, concertgoers streamed out of the Capitol Theatre. The American metal band, Dokken, had just performed to a modest crowd. It would be the last concert there. Since 1926, the theatre has been a great source of entertainment and music in Flint. The Ramones, Joe Cocker, Nazareth, AC/DC, The Go-Go’s, Slayer, Green Day, Black Sabbath and other acts graced the stage. Age was catching up to The Capitol Theatre with no money for an update, and by 1996, it was closed.

In early 1996, the world was again reminded of Flint’s plight by the release of Sociologist Steven P. Dandaneau’s book, A Town Abandoned: Flint, Michigan Confronts Deindustrialization. The book focuses on the futility of Flint’s attempts to confront their problems and the inability of the city to truly realize their predicament. It speaks of the city’s irrationality in regard to the inability to let go of the past.

This would hold true when, faced with more GM cuts, local leaders combined their efforts in order to “prove” to GM what Flint could do. The Billy Durant Automotive Commission was formed with the promise of the city’s renewed commitment to General Motors. It was a last gasp effort. Commission President, William Donohue, was straightforward with the situation: “The facts are simple. Most of our plants are obsolete. They are 40 years old with 30-year old equipment, processes and systems. We are not competing effectively. The challenge is to persuade our major customer, the GM Corporation, that this community and its workers will partner up with the company to become absolutely best in class in everything we do. We have no other option.” In 1997, the commission presented a “living agreement” to GM. The agreement made many promises, from organizations throughout the city, to do better. 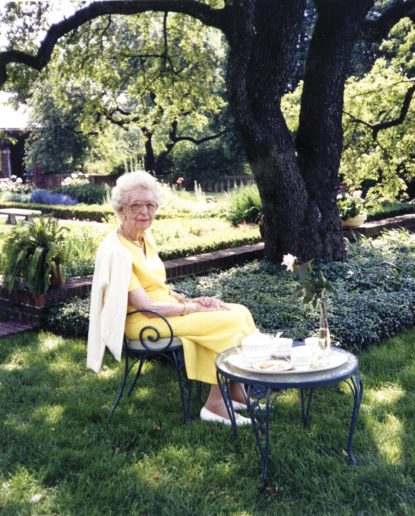 In 1999, Flint lost one of its greatest advocates when Ruth Mott, wife of Charles Stewart Mott, passed away. Upon her death, the Ruth Mott Foundation was established providing help to the community with a focus on the city’s north end.

The agreement allowed GM to negotiate local work rules on a plant-by-plant basis; offered new sewer systems, water system and roads, and continued tax abatements. The Flint Board of Education vowed to create “school-to-work” partnerships. Flint Public Works offered to rebuild roads selected by GM plant managers and the Flint Cultural Center promised to provide GM recruits with free passes to the campus. The Billy Durant Automotive Commission promised the world to GM, but it fell on deaf ears. In 1998, the Coldwater Road Delphi Plant was closed. Perhaps seeing the writing on the wall, the UAW issued a strike. On June 5, workers at the Flint Metal Center walked off the job, soon to be joined by workers from Flint East. The strike lasted for 54 days, during which 200,000 GM workers from around the country were laid off. President Clinton intervened and called for a quick resolution. An agreement was reached on July 29. GM promised to invest $80 million into new equipment and workers agreed to work rule changes. Jobs at Flint Metal Center and Flint East were saved.

Those at Buick City were not so lucky. Despite ranking the highest producing North American plant by J. D. Power in 1989, and despite hitting all benchmarks, Buick City ceased operation and closed in 1999. The last vehicle, a LeSabre, came down the line at 12:37pm on June 29. The writing was on the wall when as early as 1997, GM moved the headquarters of Buick from Flint to Detroit. Throughout its tenure, the Buick City plant was on shaky ground. The GM Corporation and UAW Local 599 were constantly at arms, never reaching an agreement. The closing of Buick City marked the final extraction of GM from the city that built it. GM employment in Flint was listed as 25,000 at the end of the decade. GM was gone.

As the decade passed, the city spent the time waiting. Waiting for an answer. Waiting for GM. Waiting for a future. Waiting for anything, yet nothing substantial came – only the realization that in order to continue, it would have to reimagine itself. Flint is no longer “Vehicle City.” It is now on its own. Flint will always remember its past and heroes. It will continue to provide the same resiliency, work ethic and outlook, just in a different way. The next decade will provide growing pains, sacrifice, strategy, frustration. The rebirth of Flint will be a sputtering start … but a start, nonetheless. 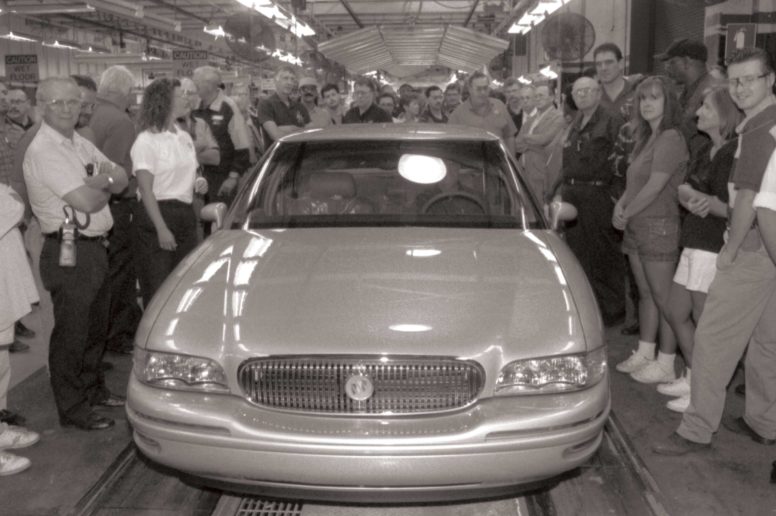 The end of an era. On June 29, at 12:37pm, the last vehicle came down the line at Buick City – a 1999 Buick LeSabre
Photo provided by General Motors