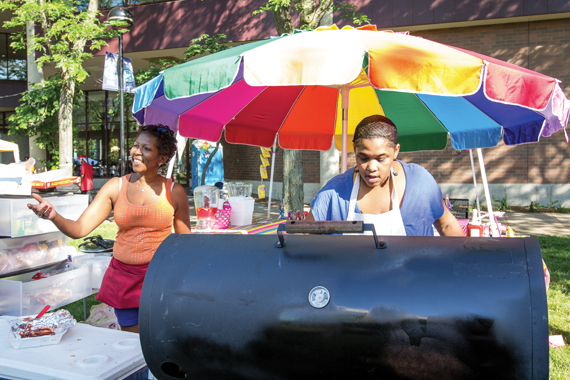 Juneteenth, a portmanteau of the words June and nineteenth, is a holiday that takes place each year on June 19. Observed by the majority of U.S. states, it is acknowledged as African American Independence Day.

In recognition of the holiday, the Juneteenth Committee of Flint presented “Juneteenth Extravaganza” at Riverbank Park in Downtown Flint. From noon to 9pm, the celebration included a parade from Max Brandon Park to Riverbank, food and clothing vendors, and several presentations of art and entertainment for the residents of Flint. The event’s theme was “A Time to Reflect and Rejoice,” with We Are the Children of Those Who Choose to Survive serving as the motto.

Several hundred Flint residents flooded the streets for the parade and later populated Riverbank Park for the many presentations. One such resident was Julio Harris of Flint. Harris is a Flint transplant, raised in Detroit and claiming Flint as his home for the past two years. He found the event to be informative and encouraging.

“I had no idea what this was,” he said, “but I love it when this space is used. I like to see people here.” Harris also stated that the event made him feel “at home,” referring to the inclusive corporate atmosphere of the activities.

Several dozen sponsors made this year’s Juneteenth celebration possible. Paul Herring of Flint serves as the coordinator for the Juneteenth Committee of Flint. He told My City Magazine that the Flint Juneteenth celebration has been running for 23 years, and when asked what he felt attendees should take away from the event, he simply repeated the motto, “We are the children of those who choose to survive.”

Are you interested in purchasing photos from this story? Go HERE and select the “Juneteenth” category.