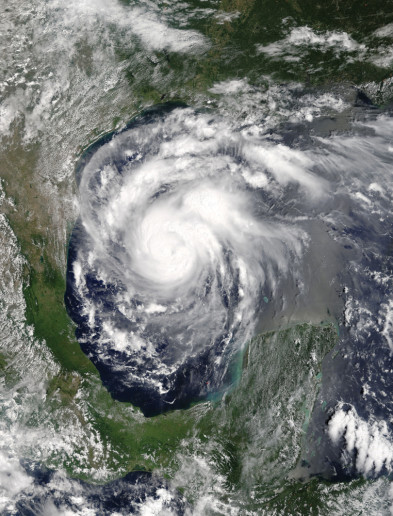 Franklin. Gert. Harvey. Irma. Jose. Katia. Lee. Maria. Nate. Ophelia. 2017 is the first year in more than a century in which ten consecutive Atlantic storms reached hurricane strength. According to The New York Times, the last time this happened was in 1893. Several of these storms wreaked havoc on the United States and Puerto Rico. Hurricane Harvey came first – causing floods and ravaging cities in the state of Texas. Right on its heels came Irma, leaving devastation in her path throughout Florida. Then, Maria hit Puerto Rico causing catastrophic destruction.

These back-to-back, life-changing events left many people in dire straits; but, as always, the human spirit shone through. The people of Flint reached out to generously to help those in need. Checks were written and supplies were donated. Local businesses organized food and diaper drives, trucks filled with supplies, and volunteers hit the road to help in any way they could.

As always, the American Red Cross was there. Some local Red Cross volunteers saw the damage first hand after being deployed following Hurricane Harvey and Hurricane Irma. 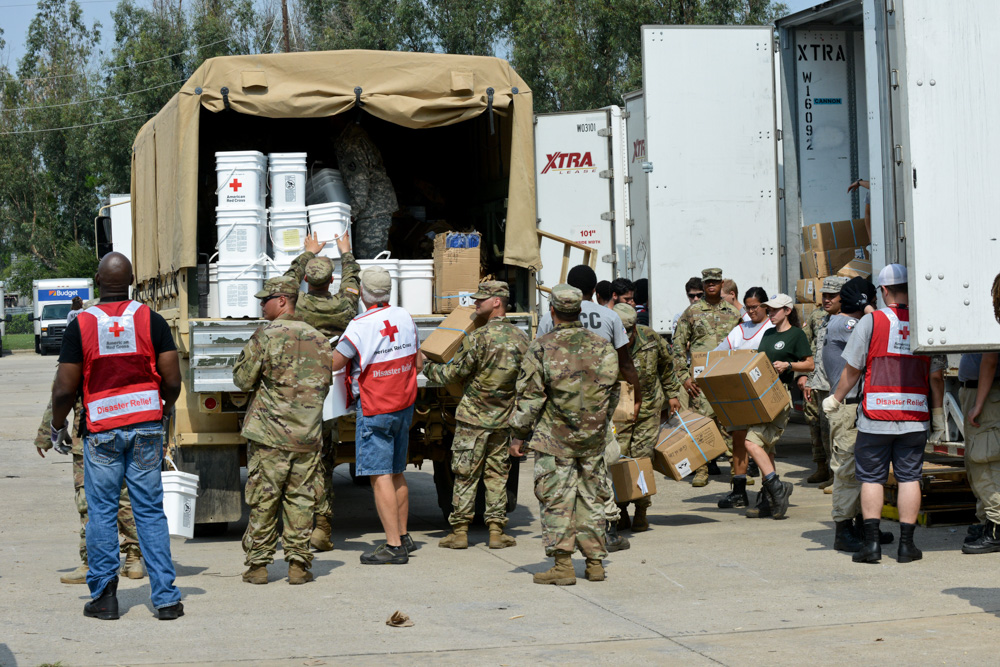 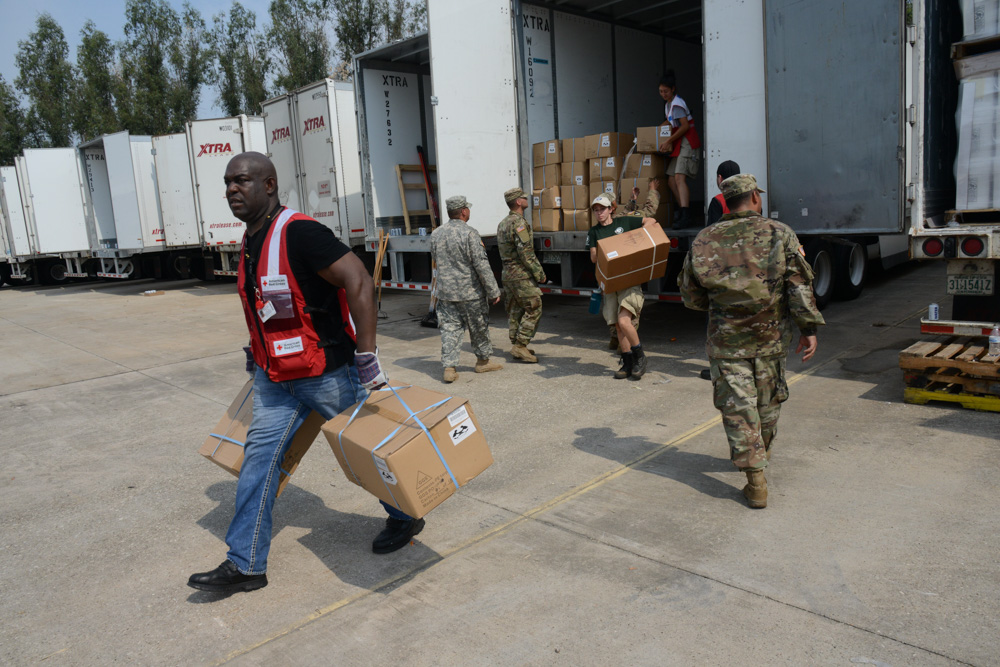 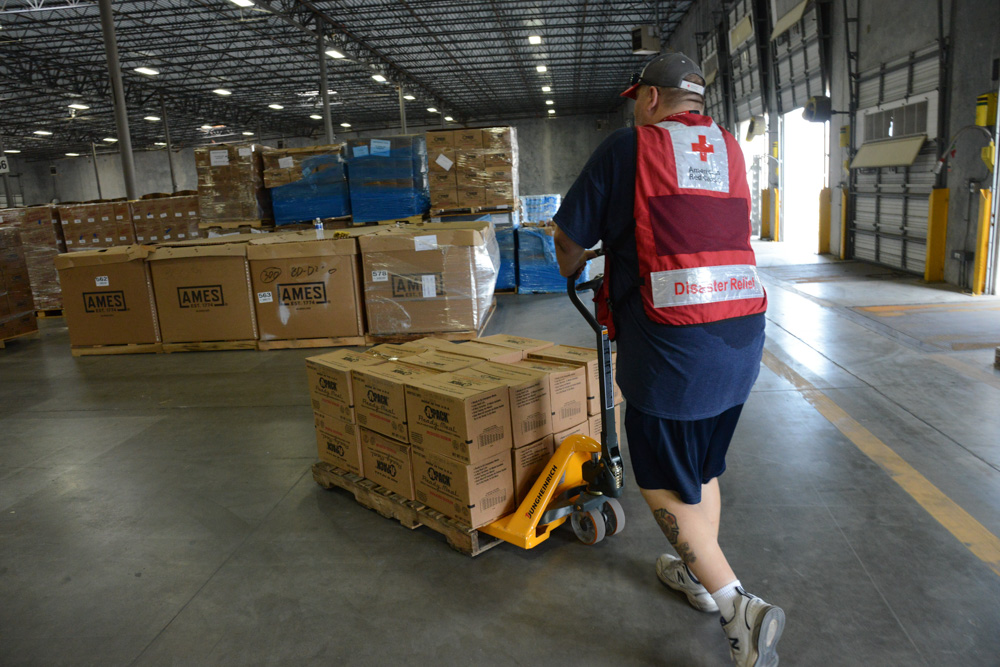 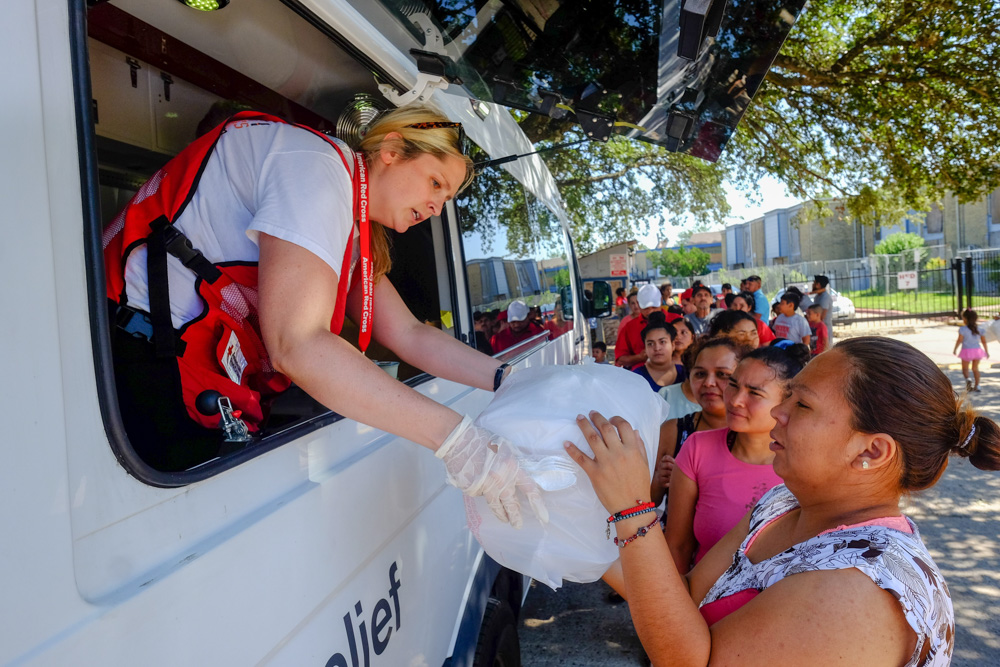 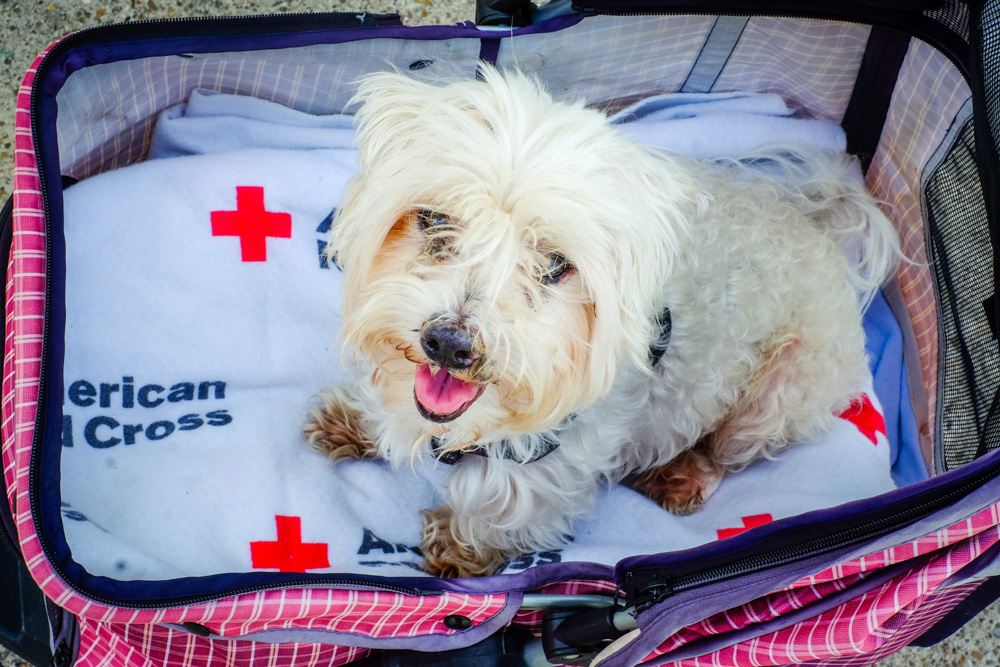 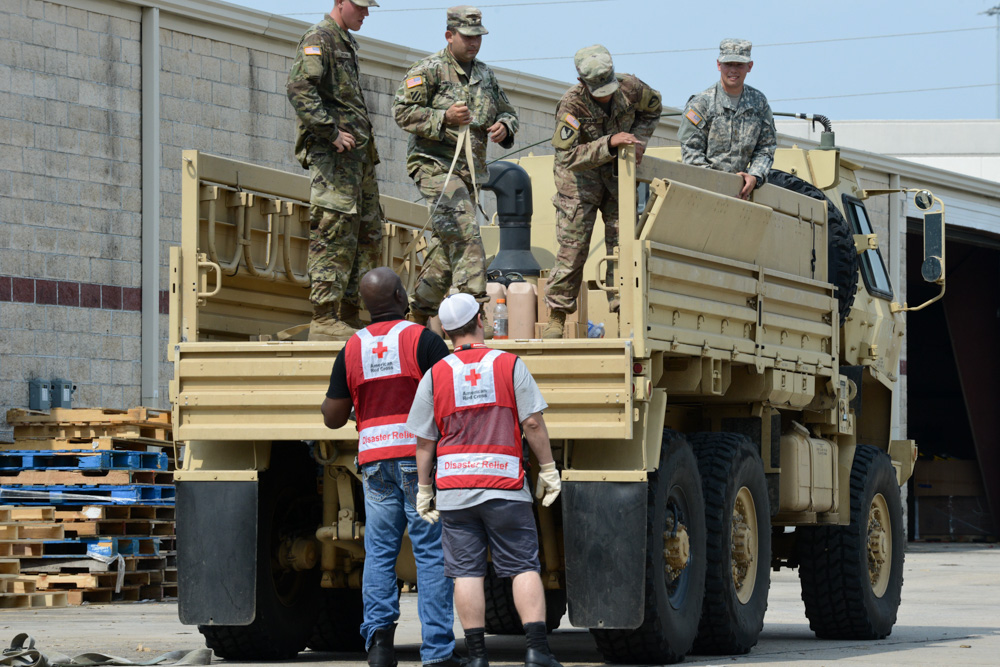 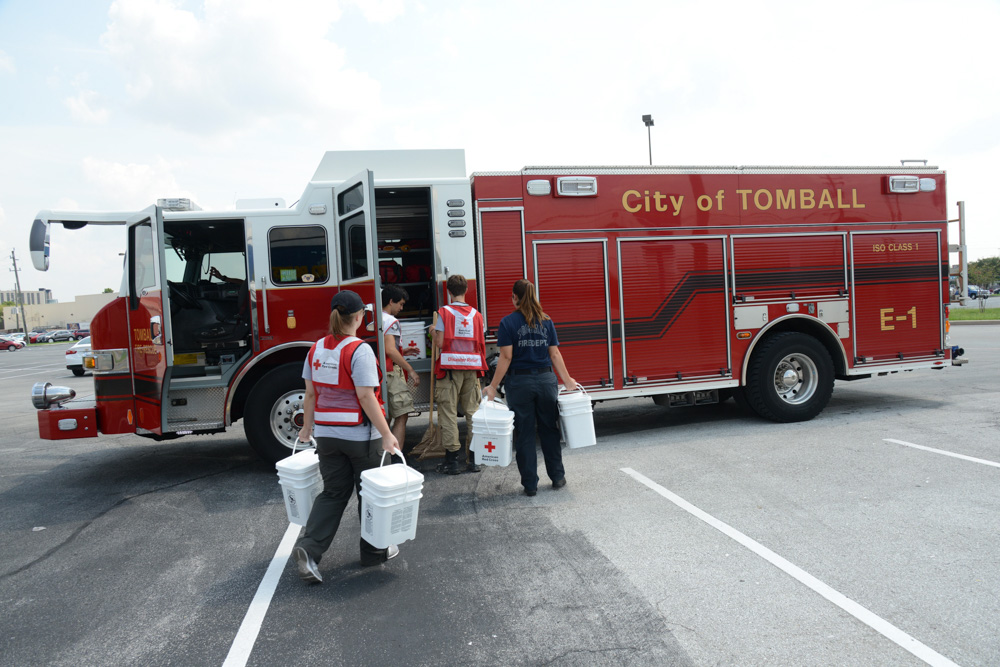 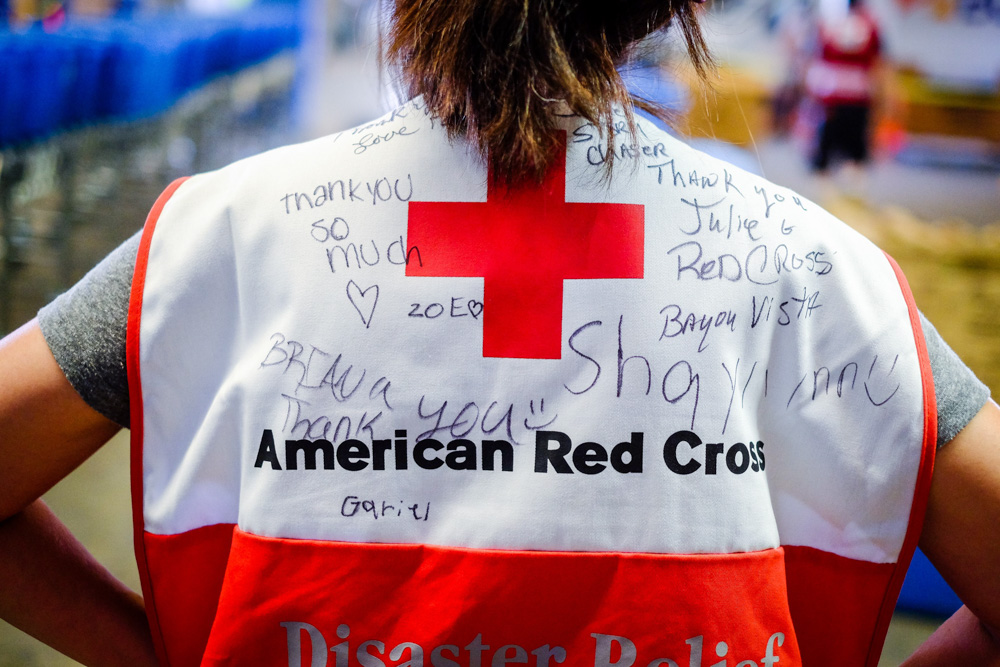 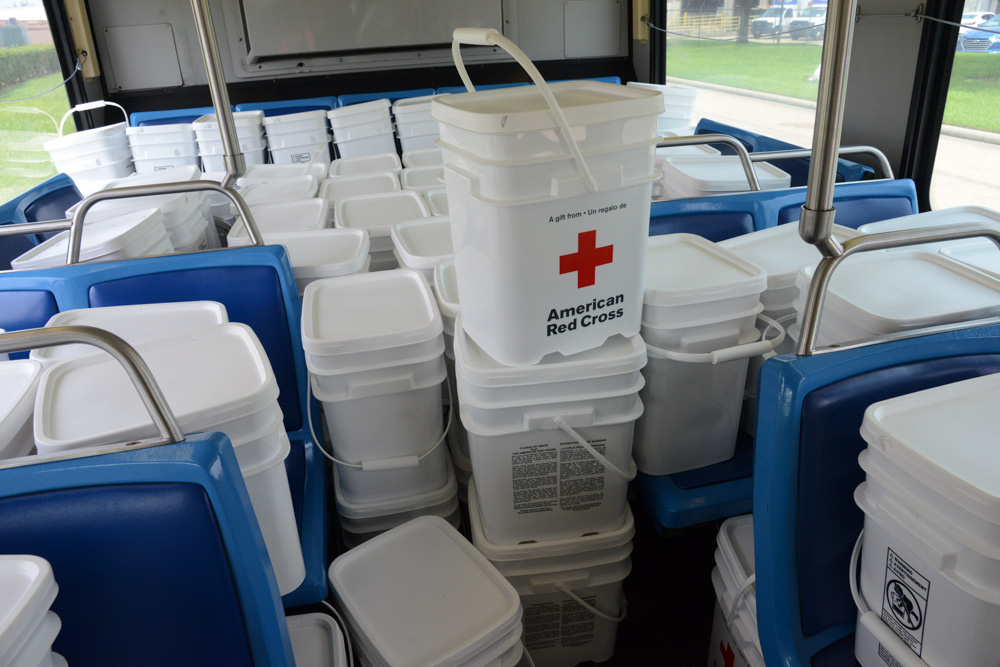 Executive Director of the East Central Bay Chapter of the American Red Cross, Anthony (Tony) Lasher, recently returned after a two-week deployment to Florida. Local Disaster Relief Red Cross volunteers Dr. Sharon A. Simeon and Marsha Schweikert are two of those who were also deployed to disaster areas. Here are their stories.

My City Magazine interviewed Lasher just prior to his deployment to Texas. “I’m definitely looking forward to helping out,” he said. “Look at the number of people who came from Texas to help Flint. I’m more than happy to return the favor.” And back-to-back, high-level disasters is something he has never seen before. “No one has ever seen anything like it,” Lasher adds. The Red Cross was mostly involved with sheltering people and working with partners to make sure people were fed. According to Lasher, 30 volunteers responded to Hurricane Harvey and Hurricane Irma from the East Central Bay Chapter. They also sent three Emergency Response Vehicles which provide mobile distribution of food and home clean-up kits, including bleach, mops and brooms. The volunteers also identify people who have significant needs and help them get Red Cross financial assistance. They also help connect people with federal agencies and other organizations. “We find out what is needed,” he said, “and then do all we can to help them get it.”

“This has been an extraordinary hurricane season,” says the executive director. “Mother Nature needs to give us a break. There is a lot of heartbreak for a lot of people.”

Simeon has volunteered with the East Central Bay Chapter of the American Red Cross for three years. “I was always impressed by the work they do,” she says. Simeon was deployed to Florida in anticipation of Hurricane Irma, from September 5-19. “They flew me to Orlando,” she reports. Her first job was to help stage an evacuation shelter in Miami where her team, a supervisor and two volunteers, was formed. “We set up cots with sheets and blankets,” she adds.

The shelter was located in Terra Environmental High School, where more than 1,000 evacuees sought relief. Since she had been deployed in advance of Hurricane Irma, Simeon experienced the full wrath of the storm. The high school, however, was built to withstand the hurricane’s force, and she said she felt safe. “I knew the Red Cross wouldn’t put us in a building that was unsafe,” she shares. “The high school was like a bunker. We could hardly hear the hurricane. It felt like we were going through a bad thunderstorm – we were that protected. We didn’t realize the devastation until we went outside.”

The school’s cafeteria staff provided hot meals for breakfast, lunch and dinner. “Everyone was so grateful,” Simeon remembers. “We waited on them hand and foot.” The busy volunteers worked 16-20-hour days. “We were very tired,” she admits. “There was so much to do, we didn’t have time to sleep or eat.”

Simeon stayed at the high school shelter for about four days and was then moved to a larger shelter at the Miami Fairground, where she stayed for ten days. After the hurricane passed, people returned to their homes and found that they were uninhabitable, without power or had been destroyed. The shelter remained open to the displaced Floridians. For the first four or five days, they only had emergency meals – pouches of dried foods. But by the time she left, meals were being catered by businesses and different restaurants that were getting back on their feet.” This really boosted the morale,” Simeon states.

Simeon’s team chose to work the late shift, from 7AM-7PM. They were lucky, as they never lost power at the fairground. She helped distribute meals, snacks and blankets. “The people were so grateful for us,” she says. Sometimes, it was just a little emotional support that was needed, so she would just sit and hold an older person’s hand. Many victims were astounded that she had come all the way from Michigan to help them.

During the last few days of her deployment, Simeon got very sick. The air conditioning was kept very cold to stop the spread of germs, and the temperature outside was 95 degrees. She was sick for several days after returning home. “Being in the shelter was so intense, I dreamed about it for days after,” she admits. “It was very rewarding to help the people in this disaster.”

A retired nurse from Flint, Schweikert has volunteered for the Red Cross since 2010. She was deployed to Texas to help the flood victims from August 26 to September 9, after Hurricane Harvey had already hit the area. “It was more of a flooding problem, not catastrophic at that point,” she said. And this was not her first time dealing with a hurricane, as she previously volunteered in North Carolina when Hurricane Matthew made landfall last year.

Schweikert left Flint in the Red Cross Emergency Response Vehicle (ERV) with Bob Hathaway of Gaylord, who drove the vehicle to Austin and to Houston. According to Schweikert, the ERV is equipped to hold food, which they served from the window of the vehicle. “We provided hot meals for lunch and dinner and offered water and snack bags.” Schweikert put in 12-14-hour days while there, working in partnership with a church men’s group who brought in a semi-truck and set up a kitchen in the parking lot. They were trained to cook the food and then load the ERV with meals that were served to those in need in the community.

While they were in Austin, the volunteers were able to stay at the Austin Hilton, thanks to the generosity of The New York Life Insurance Company who had a convention they were unable to attend due to the hurricane. They gave the Red Cross volunteers their rooms. “I was so touched by that,” Schweikert remembers.

Some of the roads the volunteers traveled were blocked due to flooding and that was very frustrating to Schweikert, but she also found the experience rewarding overall. “People helped each other; it was heartwarming to see,” she says. “It brought tears to my eyes to see that humanity still exists. It is part of my faith to be of service, and I was honored to serve.”

Want to help? The American Red Cross is always looking for volunteers and training is free. Call the Flint Chapter at 810.232.1401.