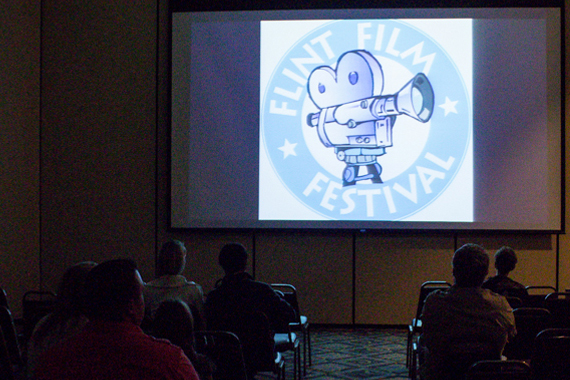 With humble beginnings in 2004, the festival continues today by the collective efforts of volunteers and indie filmmakers of local and greater national origins, and by grace of financial support from the Charles Stewart Mott Foundation and the Greater Flint Arts Council.

Eric Thomas of Flint has been a festival coordinator since its inaugural year. He doesn’t screen any films of his own, but that does not keep him from supporting the festival without hesitation each year. Why he goes to great lengths to see the event return annually is simple: he wants to grant an audience to those who do so much to present their work. “I hope to see this event grow, and to see people of Flint and Genesee County come out and support these artists,” said Thomas. “So many people work very hard to show these films and I want to see people in seats.”

In an effort to promote their work to the hilt, some dress up for the occasion in their Sunday best while others even dress up in costume. One such costume wearer was Flint native and stuntman extraordinaire, Ken Jordan. He has worked with several major studios, including the Walt Disney Company, and even once served as a bodyguard for the late actor Redd Fox. In full creative martial arts garb, Jordan, who was very impressed with the festival, was above all impressed by the work that others have done to make it come about, especially Eric Thomas. “This is fantastic right here. Eric has done a lot to get this event here, and we’re really happy to see what he’s done with the community,” Jordan said.

The plan has long been to hold the Festival in conjunction with the Art Walk held on the second weekend of October. Thomas is hopeful that with each year, the festival might draw in more people from Art Walk, since it technically serves as a part the October Art Walk line up. “Maybe we’ll start it here and have people go to other places after seeing the festival,” he said. With several dozen submissions to screen each year, the Flint Film Festival is definitely a major attraction for Art Walk supporters and the greater Flint artistic community.

Are you interested in purchasing photos from this story? Go HERE and select the “Flint Film Festival” category.