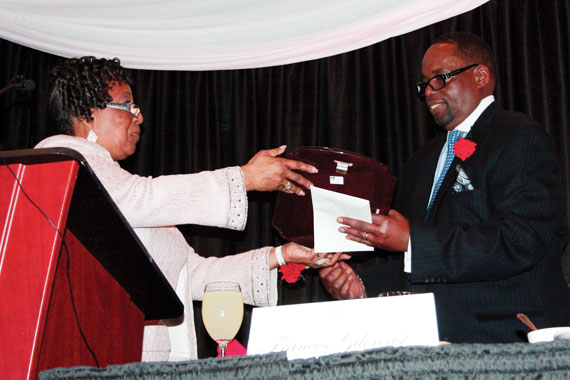 The Flint branch of the NAACP celebrated its 32nd Annual Freedom Fund Gala on March 16. Held at the Riverfront Banquet Center, the black-tie event was themed “The Fruits of Our Labor”, and highlighted the Sit-Down Strike of 1937 and other major events in the history of workers’ rights. The keynote address was delivered by Norwood Jewell, director of UAW, Region 1C.

The annual Freedom Fund Gala is the primary fundraiser for the Flint NAACP branch, helping to support its initiatives throughout the year. One of the branch’s most notable undertakings is its scholarship fund. Each year, thousands of dollars are awarded to local high school graduates for college support. Three $1,000 scholarships were awarded this year. Ryan Cooper received the Merit Award, Frederick Fife II received the Financial Award, and Victoria Pleasant received the Community Service Award. Those awarded were selected by the branch’s education committee, which personally interviews several dozen student applicants annually.

Frances Gilcreast is President of the NAACP’s Flint branch. She was pleased with the event’s success and stated, “We wanted to make the community aware of how integral labor has been in economic development, and make the youth aware of how their parents’ hard work has brought them out of poverty and into the middle class.”

Plans are already underway for next year’s event.