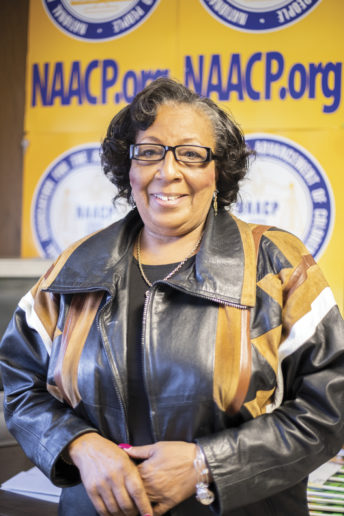 The Flint Branch of the National Association for the Advancement of Colored People (NAACP) was chartered in 1918 by the National NAACP Board of Directors and since then, has been a positive force for the advancement of civil rights in our county. Past presidents of the organization include: Dr. Jesse Leonidas Leach (who went on to head the State Branch), Henry Gipson (publisher of “The Bronze Reporter”), Harold Hayden, Edgar Holt and John Harvey. A pioneer in the advancement of Civil Rights, C. Frederick Robinson, was one of its many esteemed members. The branch positively affected race relations in Flint and beyond since its inception and continues to do so today. It has sent representatives to march in Selma, AL, organized protests to secure open housing and Civil Rights for minorities in Flint, and has sent representatives throughout the U.S. in the push to vote after the Civil Rights act of 1957.

Current President, Francis Gilcreast, remembers hearing of the positive activity of the Flint Branch when she was a young activist growing up in Milwaukee. “I remember the adults talking about Flint,” she says. “They were all jealous of how important and influential the branch was.” No doubt, a young Gilcreast would never believe that she would one day head the Flint Branch.

Gilcreast has been president of the Flint Branch for the last 12 years and continues to see positive advancement of equal rights in our community. “I have seen a lot of evolution in Flint,” she says. “It’s what we want to see. We are a Civil Rights organization. Our mission is to eradicate discrimination and racial hatred across the spectrum of every public institution in our country. We focus on eliminating discrimination in economic development, health, education, armed forces, religious affairs – anywhere it can come up.” The NAACP fights against discrimination in general and advocates against discrimination based upon age, handicap, gender, sexual orientation, race and religion. “Our job is to analyze a complaint, to judge if it is a true case of discrimination,” states Gilcreast. “If so, we work as a mediator between the parties involved to try to make the situation more equitable. Only if no solution is found do we go to the national office. They file lawsuits, we do not.” To help the Branch in this endeavor, the Michigan Department of Civil Rights sends residents, once a month to rule on complaints. “It’s been a wonderful partnership,” says Gilcreast. “We are a small branch and there are a lot of things that we cannot handle by ourselves.” 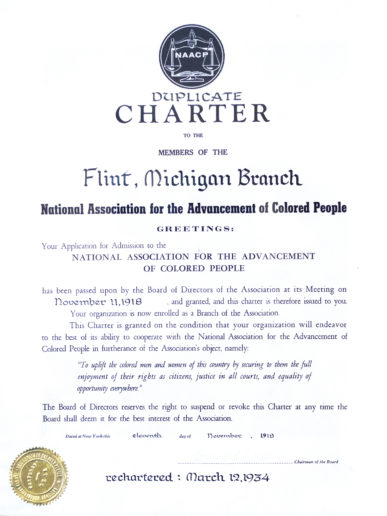 The main focus of the organization is to diminish discrimination, but the Flint Branch impacts the area in other positive ways. “The first dollar we get from fundraising goes directly to scholarships for young people in Genesee County,” explains Gilcreast. “We award four scholarships in four categories: merit, community service, need and non-traditional student. A non-traditional student is one who may be home-schooled, received a GED, or is older and looking to finish college.” The Flint NAACP also partners with Hurley Medical Center to offer two other scholarships for students pursuing healthcare. This year’s scholarship recipients are: Arianna Smith (Carman-Ainsworth H.S.), Timothy L. Johnson II (Genesee Early College), Keishaun Ali Wade (Southwestern Classical Academy) and Kayla Gager.

Every year, the Flint Branch takes part in the NAACP Afro-Academic, Cultural, Technological and Scientific Olympics (ACT-SO) – a year-long achievement program designed to recruit, stimulate and encourage high academic and cultural achievement among African-American high school students. They compete nationally in over 31 different subjects throughout the year. “You have to be African-American and in grades 9-12,” explains Gilcreast. “Students compete locally under the watch of a nationally certified judge. If you receive a gold medal locally, you are eligible for the national competition. This year, we took two students with us to the Nationals in San Antonio. Both received medals! A young gentleman won the bronze medal in ballet and a young lady won the silver medal in the poetry performance category. We are so proud of both of them.” This year will be the first time the Flint Branch will be allowed to compete in the culinary skills competition and any student of any race is eligible. “We are excited to offer our students the chance to win an award for culinary skills. To qualify, you only need to have at least two years instruction,” informs Gilcreast. “We were able to offer this competition with help from C.S. Mott Foundation and Mott Community College.”

This year, the Flint NAACP Branch plans to work on increasing voter empowerment by hosting workshops on new voter laws for Genesee County residents to make sure that every vote is counted. They will also co-host a job fair with Mott Community College. In order to prep young people for the fair, the Branch is looking to hold certified skills-training sessions in the summer.

“I’ve been so proud of this branch and it’s because I know how many we help each day.”
Francis Gilcreast

With all the advancement in Civil Rights the NAACP has made, Gilcreast knows there is still a lot further to go. “Discrimination is still out there. It wears a different form or uniform but it’s still here. The new issue now seems to be about rich vs. poor – it’s about your value as a person,” she says. “I used to fear that our young people didn’t truly understand the situation. I’ve seen them become internally focused, only thinking of themselves. They have a powerful tool in social media that we did not have and I didn’t think they would use it, but they are. It’s encouraging.”

The NAACP recently integrated a new wing for young people called the Leadership Council and it is making a difference. “They have gotten young people to understand why it’s important to learn about the past in order to look toward the future,” Gilcreast says. “We have to let them know that it is not about them, individually. It’s about the whole country because when we do better, everybody does better. When things are equitable for you, they are equitable for everyone.”

Francis Gilcreast believes that things are slowly continuing to improve, both nationally and locally. “I’ve been so proud of this Branch and it’s because I know how many we help each day. We all try to be a benefit. You don’t want to leave this world having spent the whole time doing things only for yourself,” states Gilcreast with tears in her eyes. “We volunteer here every day because of our beliefs, our passion and our love for Flint. We stand for justice, freedom and equity and will always fight to make sure that people receive every benefit written into our Constitution.” 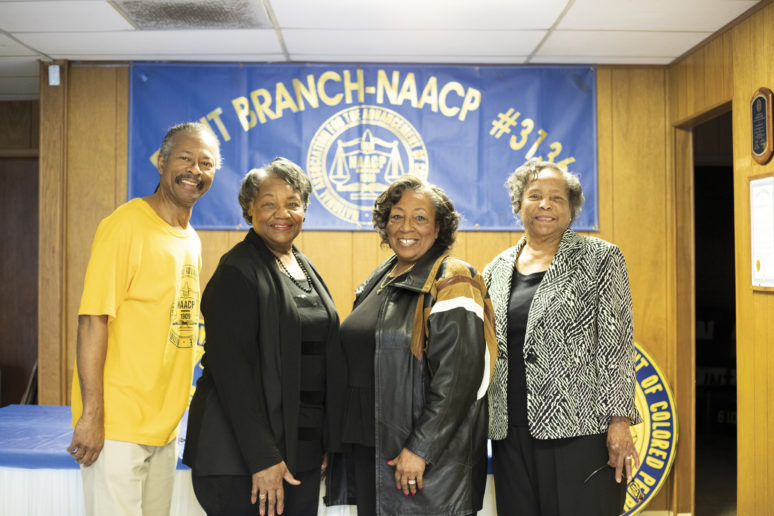