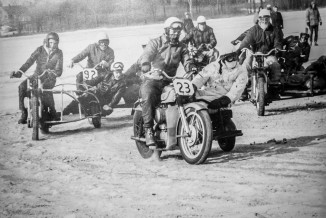 Clubs typically form when a group of people discover their shared interests; so when a club’s common interests are motorcycles and doing good for the community, the unlikely pairing becomes something to recognize.

The Flint Motorcycle Club, established in 1946, is a dedicated non-profit organization that raises funds for people – especially children – who live in the community. With its longest-running affiliation with Big Brothers Big Sisters of Greater Flint, which they have been dedicated to since 1959, the FMC continues to help out these “Littles” in many ways. Big Brothers Big Sisters is the Club’s primary charity, top-priority, and longest-running cause.

Big Brothers Big Sisters of Greater Flint (BBBS) is grateful to the FMC and its membership for their commitment and the longest partnership with the agency mission. In 2008, the Club was recognized with a Joe Ryder Lifetime Service Award. Nominated by Big Brothers Big Sisters, the FMC was recognized for their leadership and honored at the Priority Children Annual Breakfast in 2011. “We’re really proud of it,” says club president, Scott Purdy. “It was a really big deal to us. It’s really nice doing things for your community, and then being recognized for it. We have a lot of pride in what we do.”

This year will be the 57th year that they host the Ice Race at the Dort Federal Event Center, which is typically held in December. Five-year-olds to professionals make their way out to participate; it is their biggest event of the year. “It’s an all-day event for us. It’s a lot of hard work,” says Scott. “We’re a family-oriented and community-oriented club.” 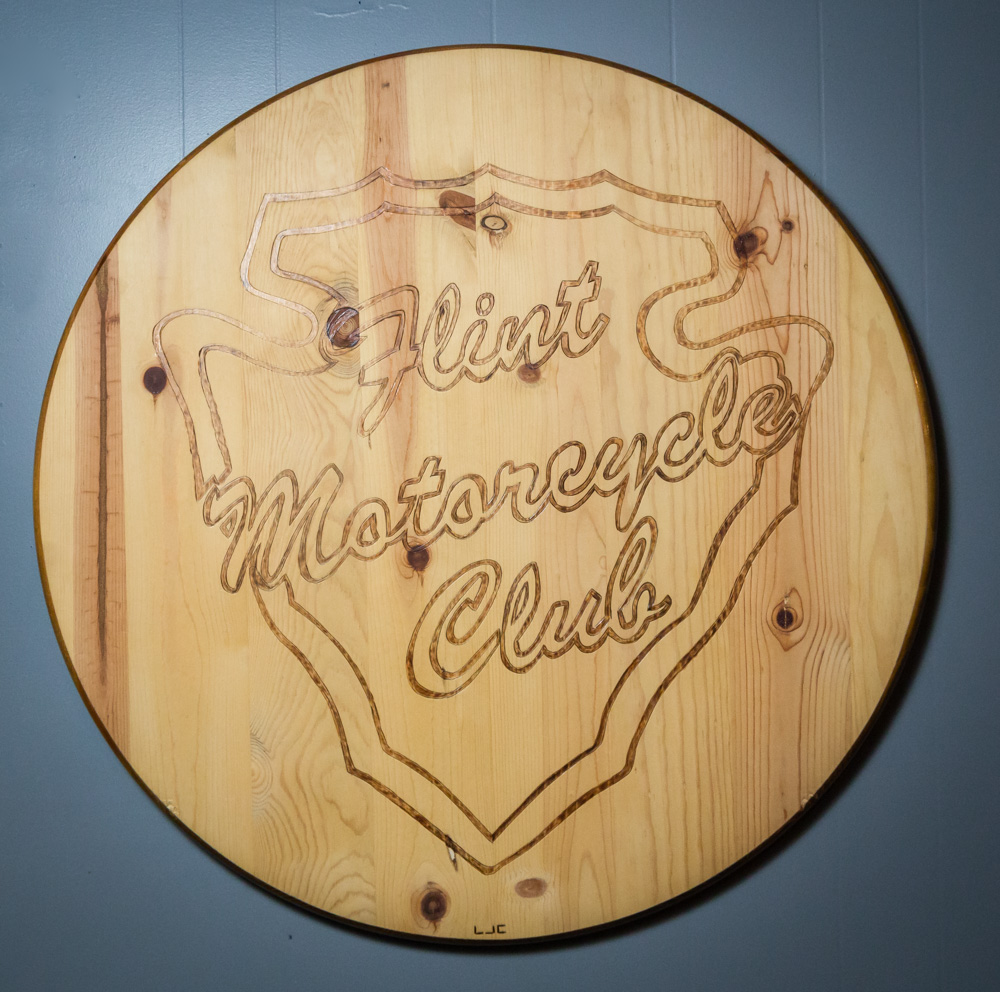 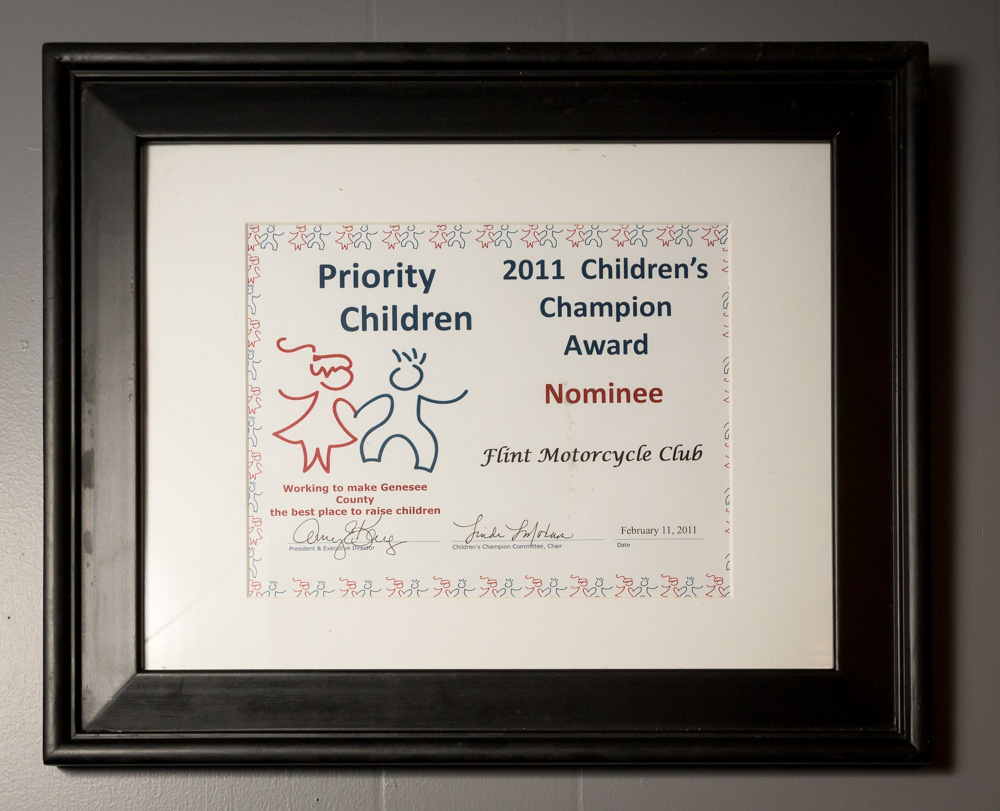 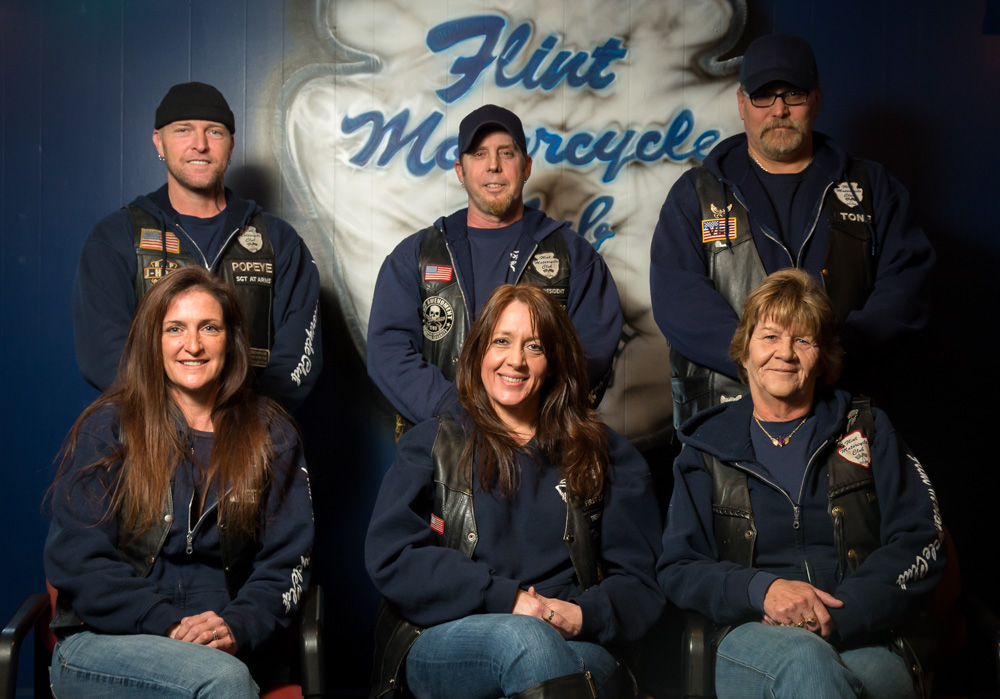 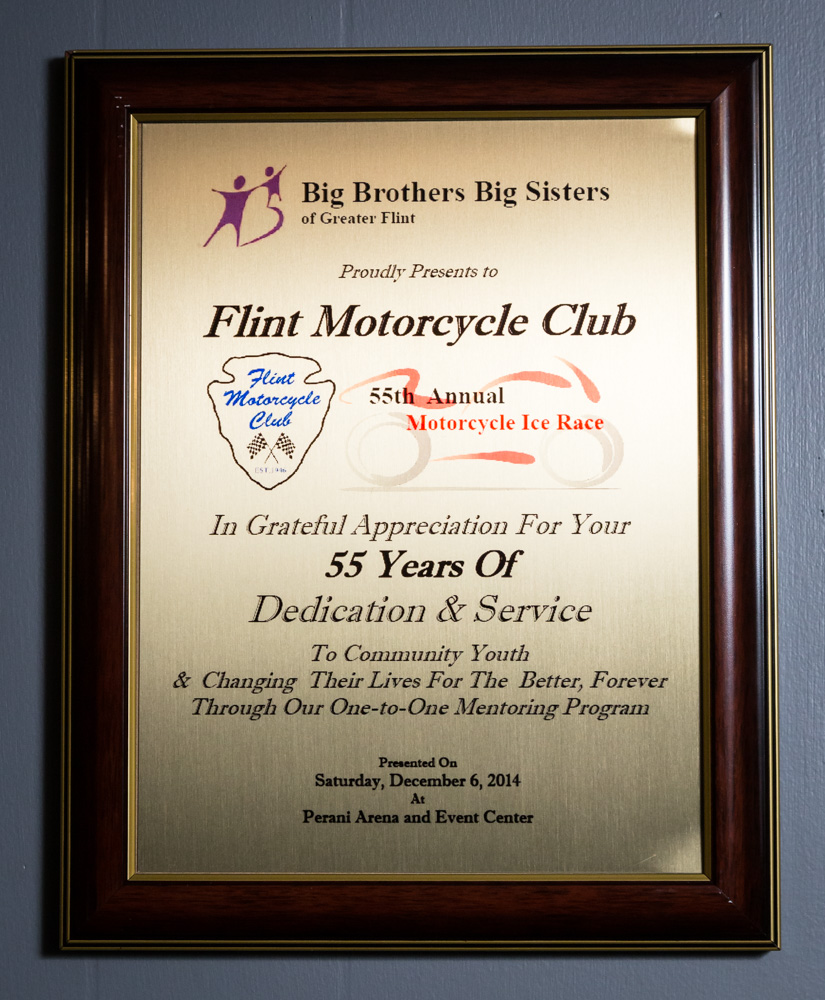 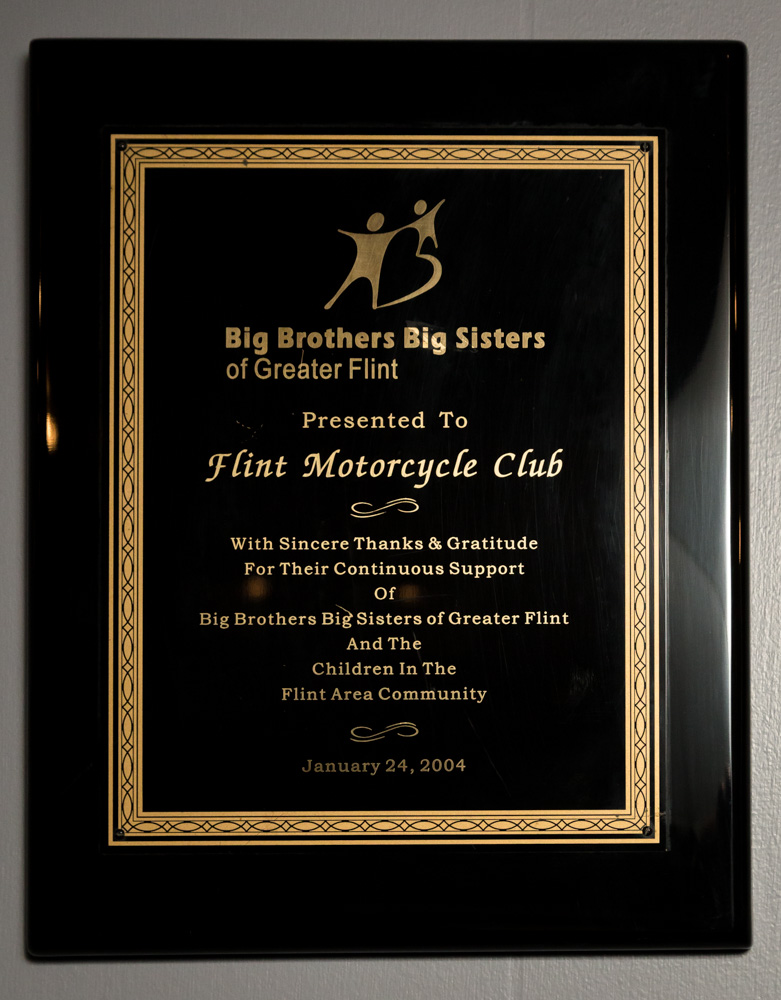 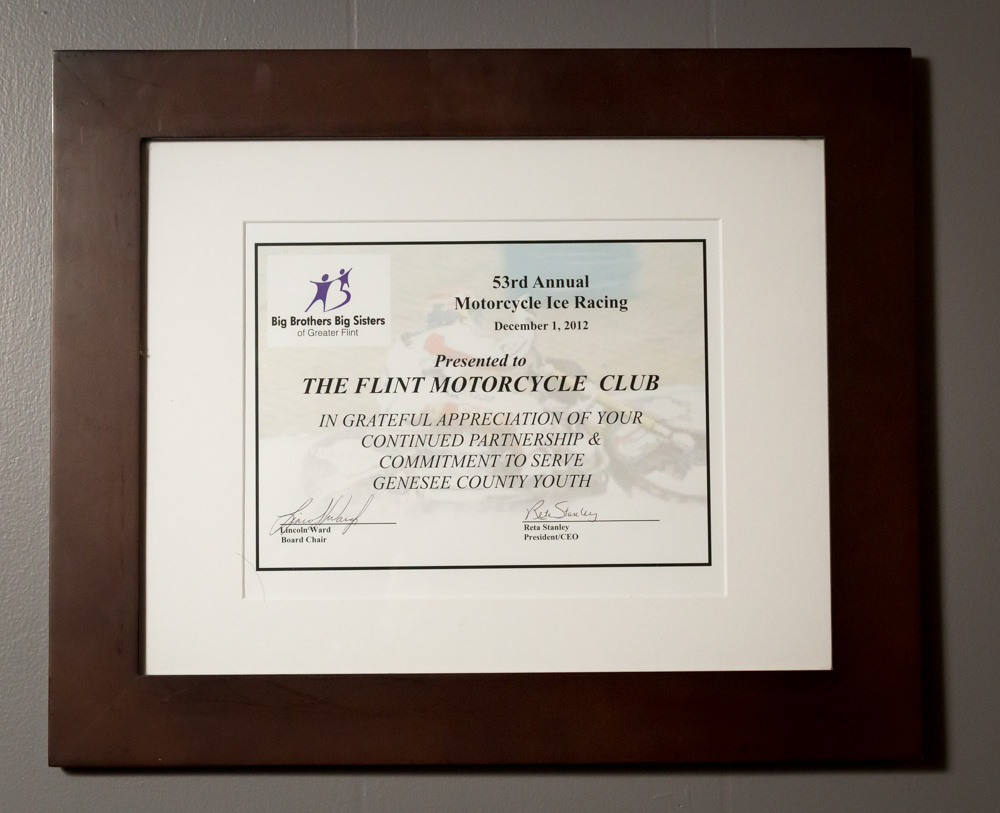 The Club has strong partnership with Scooters Bar & Grill on Torrey Road, and hosted an auction for past 15 years. The fundraiser supports recruitment of “Bigs” for the agency, because there is a substantial need for mentors. The agency serves nearly 700 youth in One-to-One matches. More than 400 youth are on a waiting list.

A few years back, the Club started a toy drive for the “Littles” in the program, and now it has evolved into something bigger. Although many of their causes come out of necessity or tragedy, the Club enjoys working with BBBS because of the positive mentorship. “We also do it because it makes us feel good,” says Jerome “Popeye” Lowell, FMC member.

In their seventh year of hosting these outings for BBBS, they have become the highlight of the Club’s summer season. The kids enjoy bounce-houses, games, basketball, fishing, food, face-painting – all of which the Club supplies with personal donations.

Last summer, approximately 200 people, including the kids from BBBS, came out to the picnic. They started these picnics so they could interact with Little Brothers and Little Sisters.

“We wanted to do something one-on-one,” adds Kelley Purdy, Scott’s wife and FMC member.  “It’s amazing when the kids come out here, because sometimes, they’ve never seen a frog, or a certain bird, or a fish.”

“It’s amazing to me, watching their eyes when they catch a fish for the first time,” says Tony “Tone” Purdy, Scott’s brother and FMC member. “That’s the most fun I have when they’re here.”

In August, the Club puts together book bags for the Littles, filled with school and even dental supplies (donated by a local dentist’s office). Many local businesses donate things here and there for the picnic. “Otisville is very good to this club, and we want to be good to Otisville,” says Kelley. This year the Flint Motorcycle Club Picnic will take place on August 28. 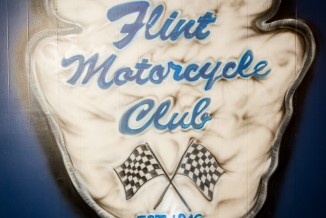 In addition to helping out BBBS, the FMC also helps other people or organizations in Genesee County through events like spaghetti dinners or auctions for cancer causes, helping with medical bills or insurance bills, those who have suffered house fires or car accidents, among others. Many times, they are approached and the Club decides whether they can help. Everything is discussed by the FMC members. “Everyone’s heart is in it,” says Scott. “If we choose to do it, we’ll do it. 
We kind of run at it head first.” Even if they aren’t hosting the charitable events themselves, they usually still find a way to contribute.

Though the Club is a 501(c)3 non-profit, they describe themselves as “charity-poor;” meaning that the money they do have is always being donated somewhere else. They do host events at their clubhouse in Otisville to help them maintain the building and the grounds. Everything on their property is maintained by FMC members and volunteers.

With their weekend get-togethers, especially during the summer, they invite people of all ages to enjoy the fun during their Music Fest, which is held in July, and their BBBS picnics. On their 40 acres of land, there is a concert pavilion, a playground, a small fishing lake, and space for kids to run and explore. Over the weekend, members and volunteers camp out in RVs and trailers, with cookouts and bonfires.

All the good things that the FMC does have also changed expectations of people in the community. “People are a little apprehensive, driving out here to a motorcycle club; but when they leave here, they all say, ‘It’s not what I expected,’” Scott shares. “We’re not a motorcycle gang; we’re a club!” Catherine “Cath” Anderson adds. “We take pride in surprising people.”

In addition to changing their perspectives, they like to think they’re changing the kids’ minds, too. “It changes their expectations,” says Jerome. “We treat them like young adults.”

When they do bring the kids out to the clubhouse, some don’t want to leave. This tends to be the case for the FMC members, as well; it’s their “happy place.” They consider each other family, as their own kids grew up at the Clubhouse, too.

They do admit that sometimes, it’s a second full-time job, but that never deters them. “Nothing scares anybody!” Scott says. “Everyone just rolls up their sleeves. It’s work, but it’s still fun.” Kelley adds, “At the end of the day, we’re always glad we did it.” Ranging in ages from 22 to 72, they all feel a huge sense of pride so see their “families” grow. “We all click,” says Tony. And, there’s also diversity among the members. “We count on each other,” adds FMC member, Crista “Turbo” Lowell.

Part of their motivation is their shared belief that there are people outside of Flint who care about the kids of Flint. “We bring opportunities to the kids,” says Scott. “Some kids in Flint just don’t have the opportunity they need. If you want to change a community, you start at the kids’ level. What they grow up to be is what the future is.”