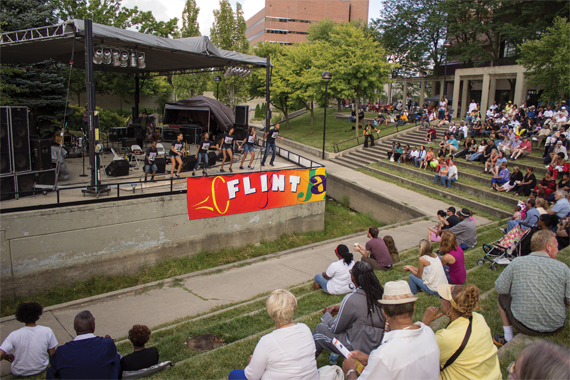 The melodic sounds of a dozen jazz musicians filled Downtown’s Riverbank Park for the Greater Flint Arts Council’s 32nd annual Flint Jazz Festival on the weekend of August 4. The Flint Jazz Festival was founded by the late Joe Freyre after he started the People’s Jazz Band in Flint in 1980. An estimated 2,000 people attended the three-day festival, a 15 percent increase from last year. A small $2 fee for each night gave listeners a chance to enjoy both local and national acts. The combination of excellent music, mild weather conditions, and the wares of local vendors made for a welcoming weekend event. Vendor sales were up this year, and proceeds from drinks sold by GFAC served to raise funds for next year’s festival.

The President and CEO of Flint Jazz Festival, Greg Fiedler, stated that “from a producer’s point of view, this was the smoothest running year since GFAC inherited the festival. Other than a couple of late starts, everything fell into place.” On a personal level, Greg says, “I got to sit down and listen to all but one of the acts this year, which was phenomenal.” One major component to a successful festival is the sourced talent, so the lineup of the artists who play the Flint Jazz Festival involves a careful selection process. Fiedler explained, “We use a formula to hire an ethnically diverse group of jazz performers representing Latin-American, Afro-American and Euro-American jazz.” Among these multicultural acts were the headliners Jason Marsalis, a member of the renowned Marsalis family of Afro-American jazz musicians, The Hot Club of Detroit, which featured Euro-American jazz music, and Poncho Sanchez, who represented Latin-American jazz sounds.

Eric Majied of Flint and his group Medium R.A.R.E. performed on Sunday afternoon. The group was founded by local music colleagues with the purpose of “bringing a vibrant style of expression to the listening audience and awakening the world’s community to new music possibilities,” as Majied explains it. Medium R.A.R.E. has played for the Flint Jazz Festival on two prior occasions. Majied told My City Magazine about his favorite things at the Flint Jazz Festival, saying, “What I love about this event is that local artists share the stage with well-known artists, in hopes of reenergizing the local community and furthering our personal performance careers.”

The increase in attendance and sales was reassuring to Fielder. He explained that after GFAC moved the festival to the beginning of the month in order to leave room for Back to the Bricks, the festival had “struggled to recover in numbers.” Acknowledging that the move “was a great move for the Flint community, but a setback for the Jazz Festival,” Fiedler believes that the growth seen this year is a trend that will continue in the future, and at 32 years and counting, the chance to see Riverbank teeming with both jazz musicians and their fans seems more likely each year.

Are you interested in purchasing photos from this story? Go HERE and select the “Jazz Fest” category.