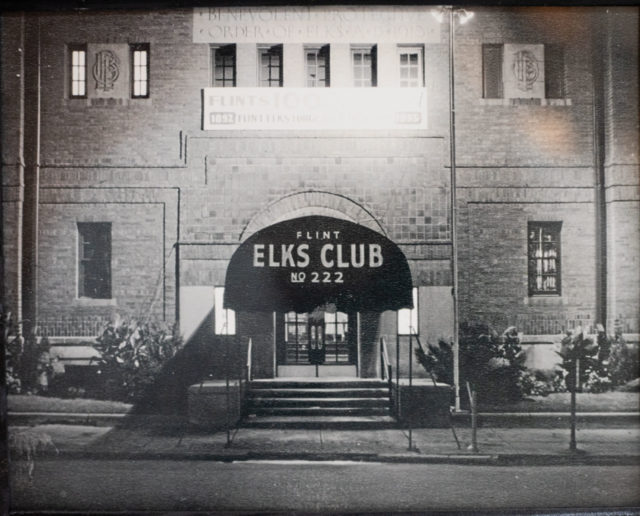 The Benevolent Order of Elks is a fraternal order that has existed for more than 150 years. My City Magazine spent a sunny, spring evening with several members of the Flint Elks Lodge 222 to talk about the organization’s 150 years of service, what it means to be a member and what they do for the community. Elks is a generous charitable foundation that gives millions in scholarships, is an inspiration to youth, a friend to veterans and much more, according to Russ Holove, Secretary of the Flint Elks Lodge 222. “We are a national fraternity,” explains past Exalted Ruler, Bill Henderson. “Our mission is to help other people and provide community service.”

The Flint Elks Lodge 222 was organized in 1891 and operated in Downtown Flint for many years at various locations including the Dryden Building and a building on the corner of Beach and Second Streets. Early members included William Durant, Dallas Dort, Walter Chrysler, Buick President Harry Basset, William Ballenger, Sr. and Charles Stewart Mott. “Billy Durant was our first official member,” says Holove. “His was the first official card issued.” 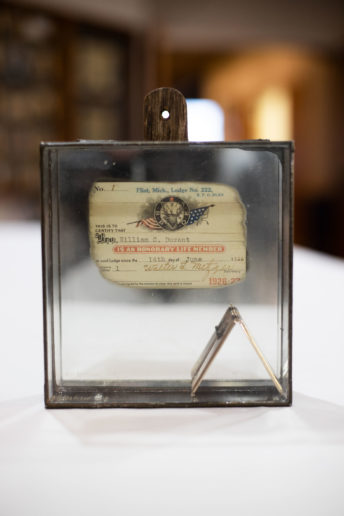 Over the years, the club experienced a slow decline in membership and in the ‘70s, members voted to sell the Downtown lodge building and move to the current location in Grand Blanc on East Maple Road. “The club bought Willow Brook, a small golf club,” Henderson shares. “We have had this beautiful facility for 50 years.” The members enjoy a private golf club and a competition-size pool where they hold swim meets.

The top program Flint Elks Lodge 222 donates to is the Elks National Foundation (ENF), according to Henderson. “None of what we do would be possible without them,” he says. ENF was formed in 1928, when Grand Exalted Ruler, John Kelly, donated $100,000 of his own wealth to start the foundation with the initial intention of helping widows and children of departed members. Since then, it has initiated other programs including a scholarship program, drug awareness program, veterans’ program, and programs for children with special needs, reports Jim Daris, also a past exalted ruler. The ENF is currently worth $675,000 million. Henderson explains that Elks members all around the country make donations, which are collected at the state level and then given to the national foundation. “Each year, the donations are tallied and every state gets a share. “For every dollar we donate to the ENF, we get three dollars in return.” The money they receive from ENF is used to support their local programs.

Flint Elks Lodge 222 also is host to many annual fundraisers, such as Texas Hold ’em tournaments, mystery dinners, a golf outing and rib cook-off. Daris spoke of an occasion when the Elks helped a child with special needs get a three-wheel bike. “He was so happy; he just took off on it in the parking lot!” he remembers. Then, someone stole his bike, and he was so upset. “So, we got him a new bike.” 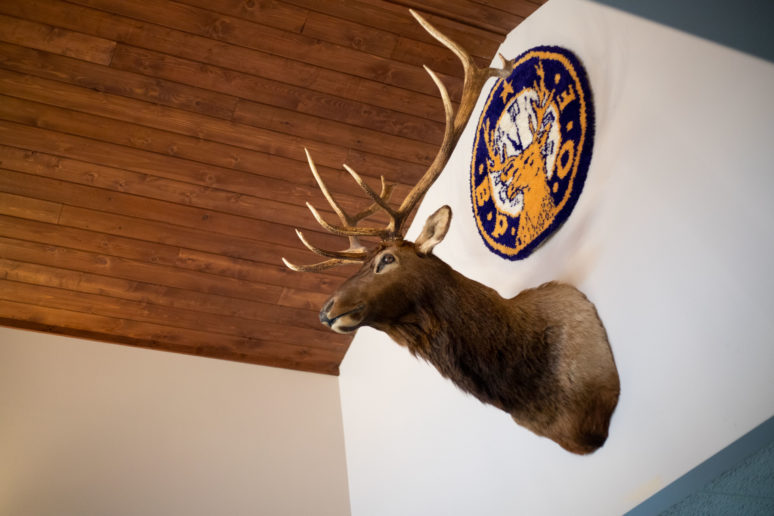 The Elks are also known for their support of veterans, especially those who are in need. The Flint Elks go to the Veterans Hospital in Saginaw and play bingo with the veterans there. The women’s group makes Christmas stockings filled with personal care items for veterans. The group also helps veterans staying at My Brother’s Keeper, a men’s homeless shelter in Flint.

Every Christmas Eve, the Elks Lodge 222 also hosts a Giving Feast when members prepare a delicious meal for needy families. “In the last five years, we have delivered 2,500 meals all around Genesee County,” Henderson reports. Other organizations such as Catholic Charities, Salvation Army and other groups provide the Elks with a list of needy families. “Last year, we delivered 650 meals and had 60 volunteers. The chef from Redwood Steakhouse, Luis Fernandez, helps us a lot.” 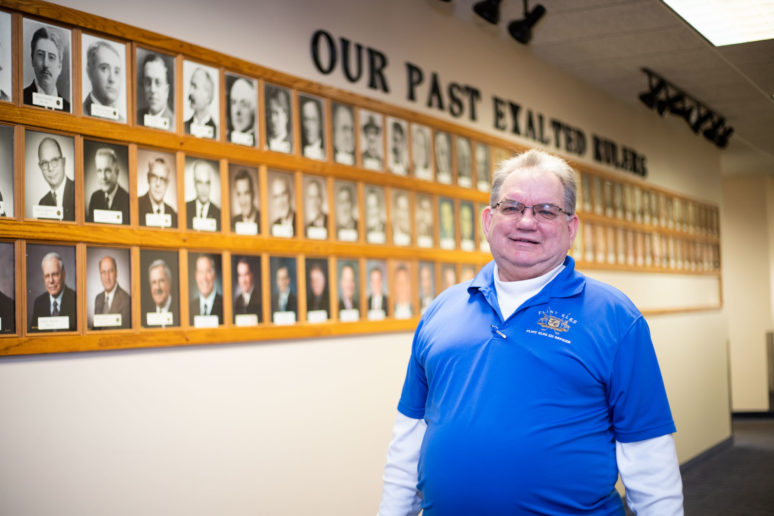 Elks Lodge 222 currently has 844 members. There is an initiation process for new members, which they are always seeking. “I became a member because I wanted access to the golf course and a couple of my friends were members,” Henderson admits. “But then, I retired and became more involved. I’m now an Inner Guard and have held various other positions over the last 15 years.” Daris adds, “The more I did to help other people, the more I wanted to do it. I wouldn’t trade it for anything. The club has basically become my home.”

Elks membership is not exclusive to men – there have been two female exalted rulers and there is also a Ladies Auxiliary Group opened under the Elks Charter. “They contribute a lot,” says Daris. “They have many fundraisers throughout the year.” Led by Darlene McKone, a past exalted ruler, they also operate several children’s programs.

The Elks motto is “Elks Care. Elks Share.” At a convention this past year, the organization celebrated 150 years of giving. “We help people,” says Thibo. “That’s what we do, and we have continued to help people since day one.” Henderson adds, “We try to make our community a better place, and as long as there are veterans, the Elks will never forget them. We are not only a charitable organization; we are a patriotic organization.”

The Elks’ Point of View

“We seek to bring into our family only those who delight in wholesome associations with congenial companions, who possess a deep sense of patriotism, fair play and dedication to noble causes – persons who find the fulfillment of their existence in service to humanity, feeding the hungry, sheltering the homeless, aiding those in distress and proving themselves to be true friends to all in need.” 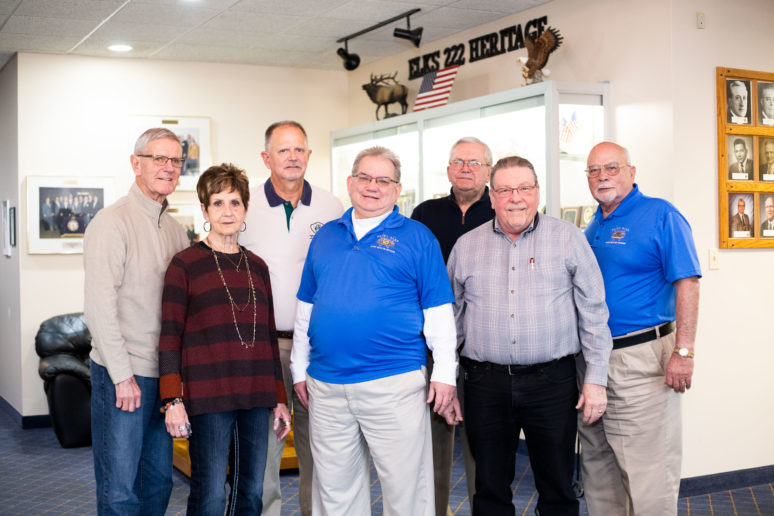