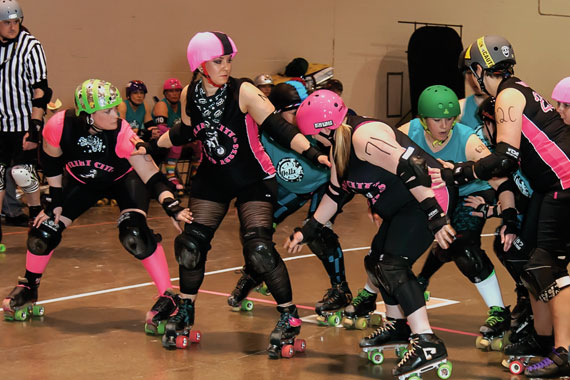 What do a film school student, a medical assistant, a college English professor and an environmental quality analyst have in common? In this case: rollerskates! The Flint City Derby Girls come from all walks of life, range in age from 19 to 44, and they give a whole new meaning to the phrase, “Pretty in Pink.” Don’t be fooled by their girly uniforms … they’re tough and they’re fast; but above all else, they are a team.

To find out just what it means to be a derby girl and to discover what role they play in the community, My City Magazine met with some of the team members at one of their grueling, bi-weekly practice sessions held at Grand Blanc’s Roll Haven.

Founded in March 2007, the Flint City Derby Girls was the fourth such team to form in the state of Michigan. The group is a big supporter of the Flint community, says Jennet Malone, better known at the rink as “Alotta Legz.” They help their city by promoting awareness and hosting fundraisers for worthy causes. This year, the FCDG have chosen to focus their efforts on the YWCA Women’s Safe House of Flint. “We give back every chance we get,” said Jennet.

Being a roller derby girl can be life-changing, according to Nicholas Cotton, an FCDG bench coach. He loves roller derby and loves what the sport does for the girls personally. “They find their voices,” he said. “It changes their everyday lives.” This team, he also says, is one of the best he’s ever seen, because of the way they work together: “This is an awesome group of girls. They compete as a team, not for themselves.”

Kelly Butler – a.k.a. “Moxy Moron” – is celebrating her sixth year with the FCDG. A film school student and mother of a nine-year-old son, she was a jammer with the original group. “I like the athleticism and enjoy being part of a team,” she said. Community service is important to her, as well. Kelly said the original group’s main goals were to get involved with the community and do something positive for the city of Flint. Recently, the girls filled Easter baskets for the North End Soup Kitchen. Kelly is a team captain, along with Jackie Knoll, whose derby name is “Lexi Pro.”

A member of the team since 2009, Khadijah Elamin is known as “Lez Roll!” Laid off from her job in 2008, she says that skating with the girls helped her fend off the doldrums. “I love this team,” she said. “Roller Derby has helped me to become friends with people I would never have otherwise met.” At the age of 43, she is one of the team’s oldest members.

Flat track roller derby is a contact sport played by two five-member teams. Skating in the same direction around a track, they play bouts consisting of two 30-minute periods, and game play consists of a series of short match-ups or “jams.” Both teams designate a scoring player, called the “jammer,” who scores points by lapping members of the opposing team. With four girls skating as “blockers,” the teams attempt to assist their own jammer while hindering the opposing team’s jammer. Blockers use body contact, position changes, and other tactics to assist their jammer in scoring points. Certain types of blocks and other play are considered rule violations; referees call penalties and require violators to serve time in a penalty box. The sport has become so popular in recent years that it is under consideration for the 2020 Olympics.

New skaters are referred to as “fresh meat.” Jacqueline Benson, a.k.a. “Jackie Moon” is a new skater and while she practices with the team, she’s unable to compete until she takes a skill test. Just 19 years old, she said she is probably one of the youngest skaters on the team. A medical assistant and recent graduate of Ross Medical School graduate, she says roller derby keeps her active.

“H 2 Whoa,” or Susan Doty, is the “new kid on the block” – an environmental quality analyst by day and derby girl by night. “I’m the newest one,” she said, but being the newest didn’t stop her from being voted Most Valuable Player (MVP) at her first bout. When she joined FCDG, Susan said she was looking to get involved with a team sport. “None of the soccer teams were calling me back,” she joked. As it turns out, roller derby provides everything Susan’s looking for in a sport: the camaraderie of a team and aggressive competition. “It is a contact sport,” she said, with a gleam in her eye. “A good solid hit is satisfying, but I’m not out to hurt people. It’s not about that.” What makes the sport even more appealing to Susan is that her family is now involved, as well. When she joined the team in January, her husband, Joel, became a referee. “It’s getting easier to make calls,” he said. “I’m getting more familiar with the rules.” He also said that a lot of people have misconceptions about roller derby. “It’s not about violence. It’s a strategic sport,” he advocated.

Kate Kirkpatrick has been a FCDG bench coach since 2009 and as such, she makes sure the line-up of players is set for the next jam, and that line constantly changes. “This is a good pick-me-up for Flint,” she said of the team. It is important to the girls, and has changed many of their lives. “It’s a confidence booster, it builds self-esteem and camaraderie, and gives a really good sense of belonging,” said Kate. A former Flint skater feels so strongly about the positive impact of this sport that she has recently begun a junior derby team for girls between the ages of seven and 17.

The derby girls practice twice a week for two hours, and while safety is the utmost priority, injuries can happen. Bruises and sore muscles are a common occurrence, along with the occasional black eye. “I’ve been lucky in that way,” said Kelly “Moxie Moron.” “Since I’ve seen accidents, it is really important that we set up the safest scenario we can.”

The team has a good fan following, and in the last year has become stronger than ever, proving over and over that they’re unstoppable. “They are really good,” said their coach. “This year’s team is the best yet.”