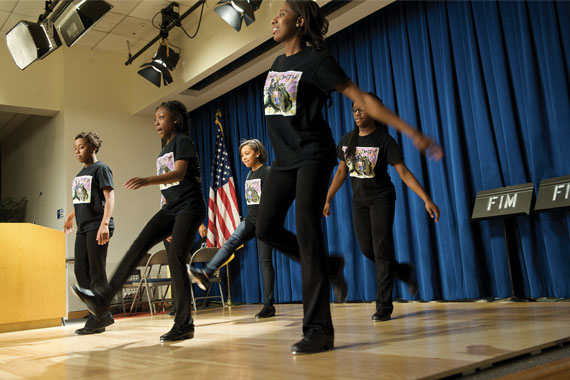 What began as an invitation for the Flint Institute of Arts to display student artwork at the U.S. Department of Education’s Student Art Exhibit Program became a cross-disciplinary collaboration between FIA, the Flint Institute of Music’s School of Performing Arts, the Flint Youth Theatre and dance group, Tapology. This concerted effort by the creative departments of the Flint Cultural Center was named Flint Arts on the Road, and featured an exhibition of student art and a day of performances held in Washington D.C.

The art exhibition remained on display at the Department of Education from April 15 to May 31, showcasing the work of 26 students of the FIA Pre-College Portfolio Development Program. The day of performances was held on April 22 and included several pieces of classical and modern, an FYT student-written and directed production, and two tap routines. Over 160 people were in attendance, and the Flint students impressed the city with their artistry and level of talent.

Of course, a trip to D.C. would be lackluster without site-seeing, so the students enjoyed the National Mall and other monuments and sites that make visiting the nation’s capital worthwhile, including the National Gallery, Hirshhorn Museum, the African American Civil War Museum, Howard University, and the Kennedy Center.

Jeff Garret, Director of FIA’s art school, undertook major coordination duties for the trip. He was completely satisfied with how things turned out, saying, “I don’t think it could have gone any better.” Commenting on the performances, Jeff exclaimed, “The students were fantastic! They were on it.”

The trip, which was free for the students, was made possible by generous donations from several private donors and organizations. Garret told My City Magazine that he would like to see future students enjoy a similar opportunity; he also reflected on the reception to the students in D.C.: “We’d definitely do it again in the future. They were very appreciative of us in Washington.”