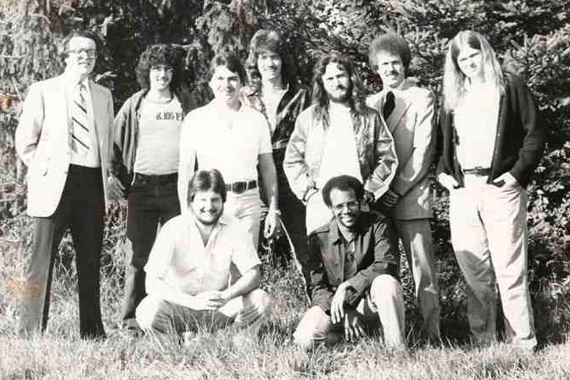 Following the impact of WWCK-FM’s successful 1977 ratings, WTAC pulled-out all the stops.WWCK couldn’t touch our promotions. We gave away ten days on the road with Alice Cooper. We flew a couple to London, England with Bob Seger for his European debut at the Palladium. We gave away 300 seats in a special “WTAC Section” at Pontiac Silverdome for the Led Zeppelin show. There were cash prizes galore, exciting contesting, innovative prizes and excellent listener involvement.

We got killed. The morning of the spring ’78 Arbitron release marked the worst day in my entire professional career. WTAC had dropped to a 5.4 percent market share. I was in agony.

We were pounding our heads against a “Pure Rock & Roll” FM wall. But youth culture was shifting.

A Scottish group called “Average White Band” was selling millions of copies of soul-based music around the world. Saturday Night Fever had sent “Disco” through the roof. We shifted everything musically, emotionally and psychographically.

Our first surprise came with publication of the Detroit spring ’79 ratings. Major markets were always released first. In the Motor City, WTAC in Flint was No. 5 with adults (13-34) and No. 3 with teens. We had never shown up in Detroit. We couldn’t believe it!!

The Flint report was issued one week later. We had climbed to a much healthier 9.2 percent total audience share, beating WWCK in teens, young adults and in total listeners from 7pm ’til Midnight. WTAC had increased adult count by nearly 50 percent.

A headline article in the Detroit Free Press cited WTAC’s penetration into the Detroit market, precipitating major local newspaper and TV coverage. Radio trade magazines ran articles on WTAC being the country’s only AM facility to successfully reverse previously FM-held dominance in teens or night-listening. They mentioned our “unique contemporary fusion format” as an “entirely innovative approach in modern broadcasting.”

We were red-hot for the moment and took full advantage of our renewed strength with advertisers. Station revenue rose proportionately. I also got a raise and was corporately upgraded to president and general manager.

Fuqua Communications had decided to sell WTAC. Part of my job responsibilities now involved helping to peddle the station and potentially put myself on the unemployment line.

Corporate headquarters called on a Tuesday afternoon. They had set up a meeting for me with someone looking for a more powerful AM facility in the Flint area. I was to meet the following afternoon with Frazier Reams, Jr. – the owner of WWCK.

We met at The Canopy restaurant in Brighton. I was relieved; Frazier was not at all what I expected. He was a refined, gracious, uncommon man in his mid-50s with white hair and noble bearing. He was unsure whether WTAC might make an interesting acquisition, but he was certain about me.

I concluded nearly 14 years at WTAC as I joined Reams Broadcasting on April 18, 1980. My first programming meeting with the “105 FM” announcing staff was unexpectedly exhilarating. Their average age was almost a full generation younger than counterparts at WTAC. I was reminded of my earliest days in radio.

I stated that I would treat them fairly, expected their professional and personal best and guaranteed that their efforts would be handsomely rewarded. I also promised that WWCK would become the highest rated Rock ‘n’ Roll Station in America. They trusted me and believed in themselves. In less than two years, everything came true.

Before the year ended, WTAC went “Country.” So did WWCK, but only at brief intervals and by most bizarre means.

Jeff Lamb was the son of famous Flint radio announcer, Bill Lamb. Bill was then working directly for Buick Motor Division, hosting a morning and afternoon show called the “Factory Whistle” on country station, WKMF. As only the son of a radio veteran could, Jeff understood “theater of the mind.” He blended innate brilliance with experience far beyond his years, an unbeatable combination. Thus was born to WWCK “Buffalo Dick’s Radio Ranch.”

An opening instrumental track of “Who’s Afraid of the Big Bad Wolf” would emanate across our airwaves as Jeff started each broadcast with the same disclaimer: “It’s time for Mom and Dad to leave the room, ’cause your old pal Buffalo Dick is on the air!”

The Federal Communications Commission suggested that a certain quantity of weekly programming be devoted to discussion of community issues and other non-entertainment features. Sunday mornings were normally the trash-heap of the broadcast week.

We had to make things more interesting.

During my time at WTAC, Michael Moore of Davison and I had experimented with a program called “Radio Free Flint.” When I moved to WWCK, “Radio Free Flint” came along – broadcasted live with open phone lines. It quickly became the hottest radio talk show in town. It might have been 8am on a Sunday when Michael hit the air, but our 12-line switchboard would light up like a Christmas tree.

The year 1980 ended with the murder of John Lennon in December. We presented 24 hours of tribute on WWCK. Michael Moore, Jeff Lamb and our entire staff combined forces to hold a memorial gathering at the Capitol Theater, followed by a silent, candle-lit march through Downtown Flint. The theater was filled to capacity.

WWCK visibility was universal. We had station banners hanging in every bar and our air personalities were hosting movie premieres, important community events and every major rock concert in Flint and Saginaw.

At the close of the 1981 United Way campaign, we dangled our “105 Super Van” from a gigantic construction crane over a WWCK billboard on I-69, and staged a 12-hour remote broadcast without any advance notice or warning. Traffic was backed-up for miles! Pictures of the suspended van ran on the front page of the Flint Journal. Video was featured on all local TV newscasts and even carried in Detroit. Karen Owens from Channel 12 in Flint met and interviewed our morning DJ, Sean McNeill. They fell in love and got married.We presented the “First Annual WWCK Rock-Off” at Flint’s Capitol Theater. “Finalists” were selected after a month of on-air contesting. We ran it like a spelling bee. The production requirements were awesome. It came off flawlessly in live broadcast… the team was getting really good. It was becoming a challenge to make each new major promotion bigger and better, so we decided to give away the world.

“The WWCK Great Escape” offered the opportunity to win a trip for two anywhere in the world. We arranged to have the final drawing conducted on live TV at Channel 12 in the middle of the “General Hospital” broadcast, when Luke and Laura were churning up viewership by the ton. But how could we follow “The Great Escape?”

Then, we discovered there was an island called Flint in the middle of the South Pacific. Research revealed that the island was a three and a half by half-mile coral reef, existing totally uninhabited, approximately 400 miles north of Tahiti. The promotion took two months to arrange. WWCK would give away a “Trip to Flint!”

Media coverage was continuous during the entire duration of the promotion. The eventual 14.3 percent total audience share during the “Trip to Flint” period was not only the best in the station’s history, but the highest measurement by market share of any Rock station in the entire country. WWCK-FM had become Flint and America’s Best. Billboard Magazine named WWCK “Rock Station of the Year.”

The “Trip to Flint” campaign won not only a Gold Award from the Flint Area Advertising Federation, but was determined by the judges to be “Best in Show,” beating national Buick Motor Division entries from global monolith, McCann-Erickson.

I had become president of the Flint Ad Club and was chosen “Businessman of the Year” by Flint Sales and Marketing Executives, a unique distinction for me and for radio. In April of 1983, Frazier Reams asked me to move to Toledo and accept appointment as Executive Vice-President and Chief Operating Officer of Reams Broadcasting.

Still Ahead: “Epilogue – From Toledo to Today”