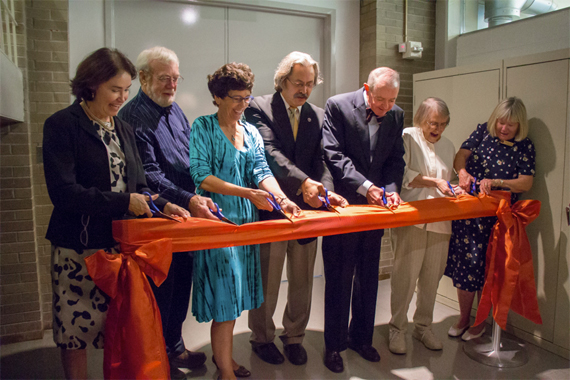 Ceramic art is a technique that dates back several millennia, the word itself originating from the Greek keramikos, which means “pottery.” Ceramics have provided both ancient and contemporary civilizations with vessels for practical, everyday use as well as for artistic display. The Flint Institute of Arts has instructed countless students in ceramics over several decades, and as expected of an institution at the fore of art instruction, FIA has recently expanded the art school to facilitate greater possibilities in the ceramics program.

The new 2,400 square-foot expansion makes possible a new kiln — the furnace used for firing ceramic art — more space for students and instructors, and more efficient and safer procedures for creating ceramics. The project has been underway since April 2013 and is made possible by a bequest from the estate of Beth Howarth, who was a longtime student of ceramics at FIA, as well as a Capital Improvement grant from the Michigan Council for Arts & Cultural Affairs, and support from numerous local sponsors. The limitations and inefficiencies of the former nearly 50-year-old kiln and the restricted space allotted for ceramics will no longer be an issue for a large portion of the FIA Art School’s student body, since one third of the Art School’s enrollment is dedicated to ceramic art alone.

The FIA Art School is among the nation’s top art schools. It has even landed on a couple of top ten lists. Many locals might not be surprised to hear as much, since a visit to the FIA’s museum portion not only reveals an impressive permanent collection, but also a number of temporary displays that feature pieces of art from some of the most renown artists throughout history. What is lost on many locals concerning FIA is that the organization is named an institution and not simply an art museum because it remains true to its original function, namely art instruction. This sets FIA apart from the limited function of a museum, which is simply to display art. The distinction is an essential one because it sheds light on the reason this art school expansion is something of great importance.

The new kiln, increased space, and designated areas for crafting different styles of art not only better serve the growing number of ceramics students, but they also allow the FIA to retain the distinct honor of being one of the best art institutions in the nation. The art school has functioned for around 80 years, and at one time faced removal from integration with FIA, but thanks to the efforts of people like current FIA Director John Henry and Assistant Director of the Art School Jeff Garrett, along with the continued support of several community organizations, the FIA Art School not only survives, but is thriving. Garrett says that the art school has a “strong support base from returning students.”

Are you interested in purchasing photos from this story? Go HERE and select the “FIA Ribbon Cutting” category.