Located in a far corner of the Flint Farmers’ Market is a small shop full of wonderful things, some of rare and unusual beauty. Art at the Market is where artists, mainly from Genesee County, display and sell their works. One such artist is James Draper of Burton. “I call it Vitrea Art Glass©,” says Draper of his newest pieces. “It’s a complete reversal from what I did when I first started.”

James has always been an artist. In the 7th grade, he began doing charcoal portraiture of his classmates, transitioning later into oils and pastels. After receiving his Bachelor of Industrial Engineering degree from GMI (now Kettering) in 1969, he worked as an engineer for General Motors. “Every engineer is a designer,” states Draper. “Every engineer you meet will grab a pad of paper, or maybe a napkin and they will start sketching their ideas. However, for me, not everything is a blueprint anymore. Now, I get to add color. It’s very refreshing.” Draper wanted to get away from the straight lines and right angles of schematics and develop his own abstract style. 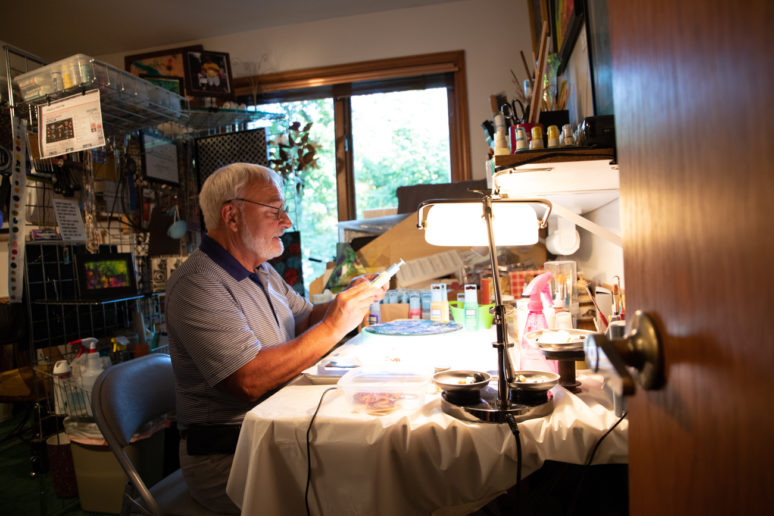 In 2006, he began attending a painting workshop headed by Grand Blanc artist, Beverly Danks, where he learned and adopted a technique called “creative watercolor.” “It is a water-based abstract process in which primarily inks, watercolors, or acrylics are placed onto a suitable substrate such as canvas or Yupo paper,” explains Draper. Then, found objects – such as beads, paper clips, chains – are placed onto the wetted surface and ink or watercolors are added. When dry, the found objects are removed, leaving a distinctive imprint. Draper uses a myriad of items in his art found throughout his travels. In his studio, he has drawers filled with items of every shape and size. From netting to plastic caps and metal tubing, he uses anything and everything that strikes his fancy. “I see something lying around, in a parking lot for example, and think, ‘I like the shape of this. I think I can do something with this,’” he says with a smile.

His art has been displayed in numerous exhibitions and shows. In 2010, he was awarded first place at the Ferndale Speed Painting Competition in Ferndale, MI; Best of show in the Greater Flint Arts Council Member All Media Exhibition; and he received the first-place award at the 2011 Art in the Sun exhibition in Northville, MI. His art has been exhibited at the Vertigo Theater, the Flint Institute of Music, the Greater Flint Arts Council and adorns the walls of numerous art aficionados and collectors. You can see six of his paintings, currently on loan, displayed at Downtown Flint’s Ferris Wheel Building. 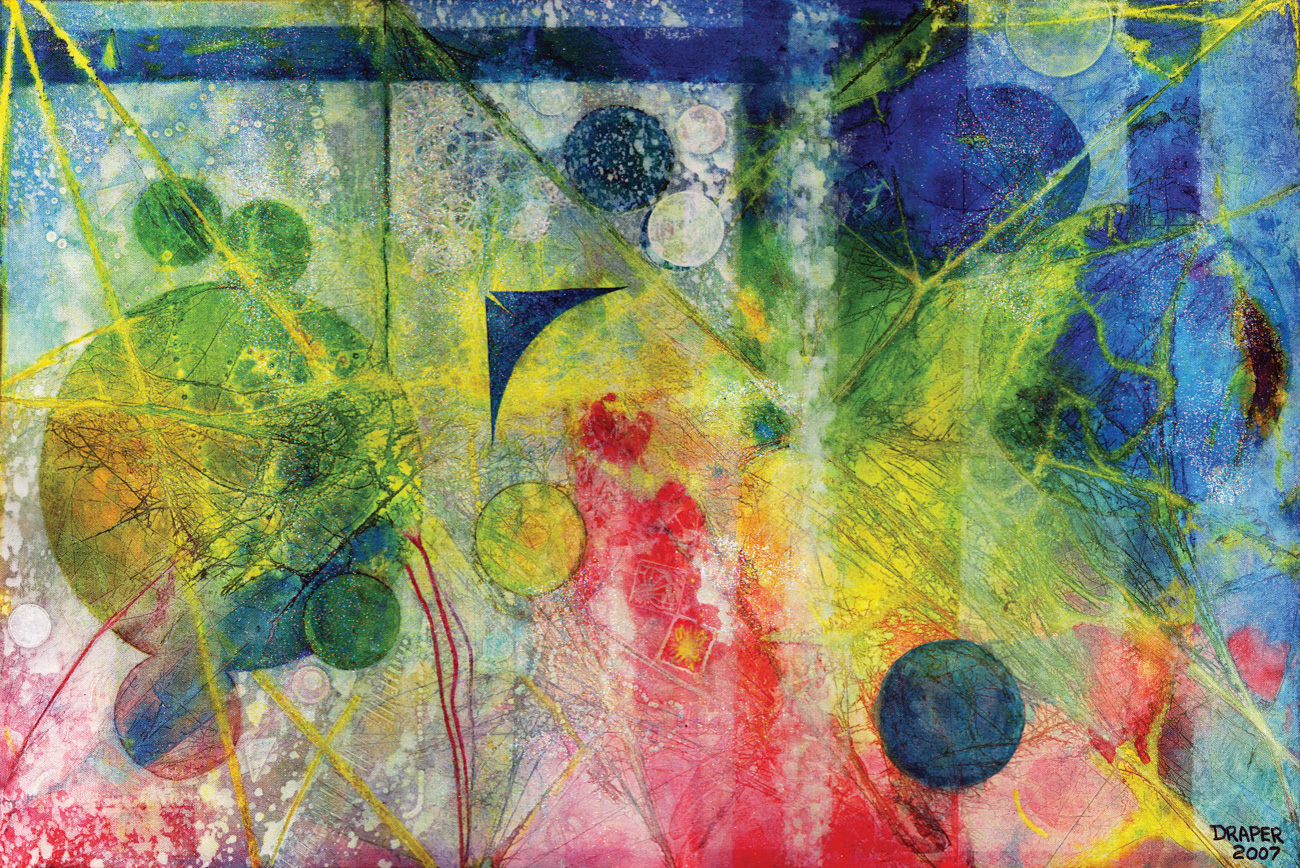 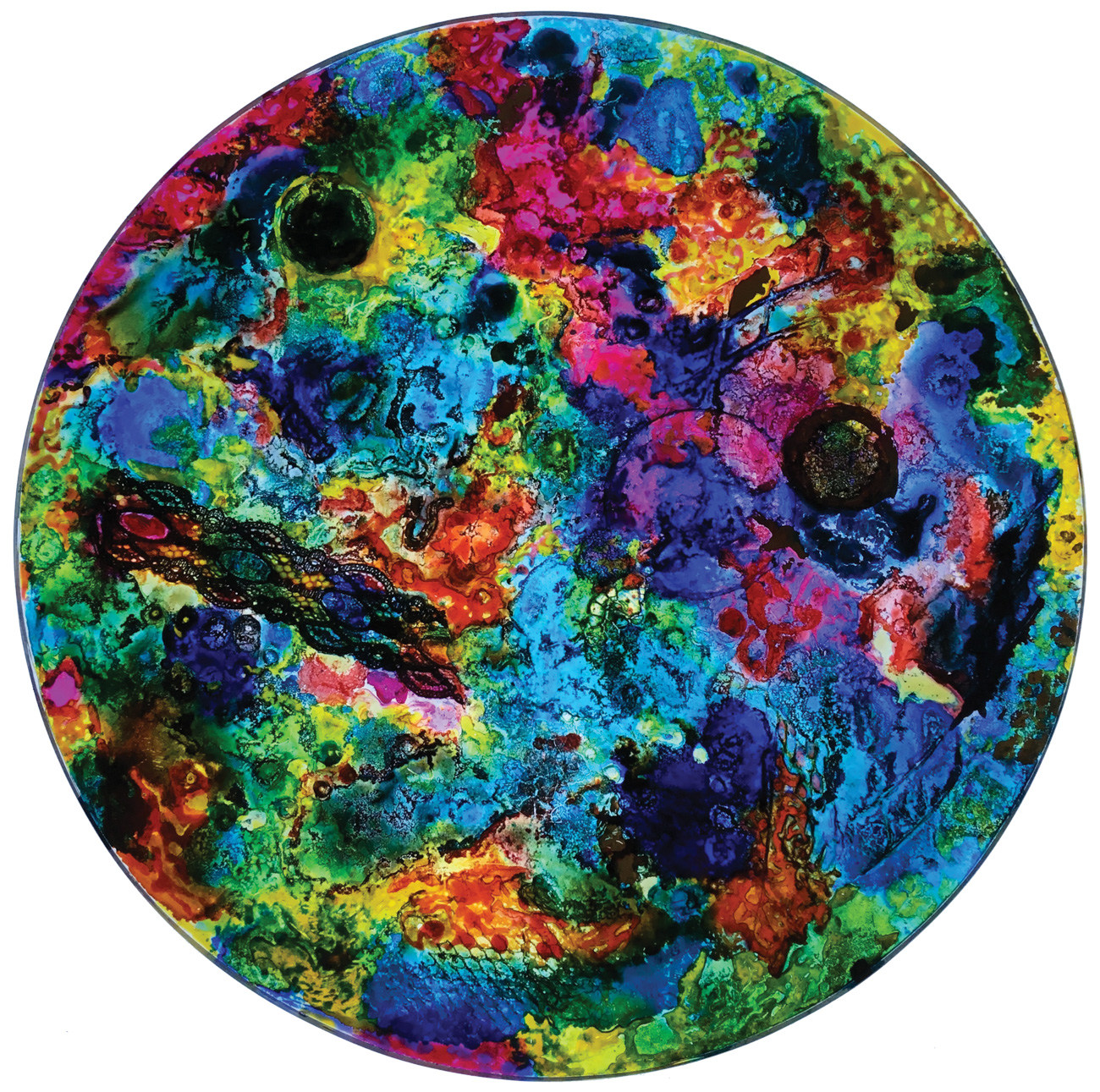 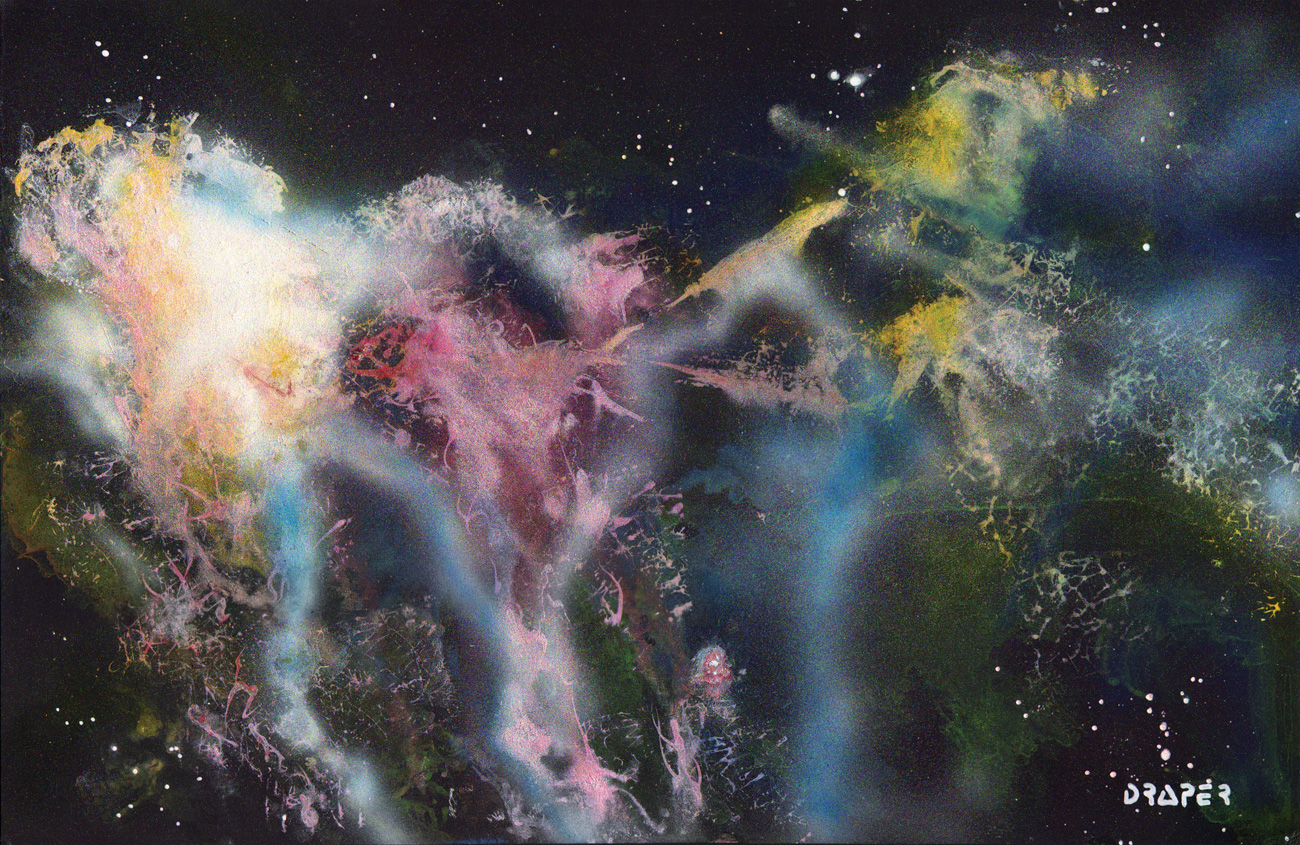 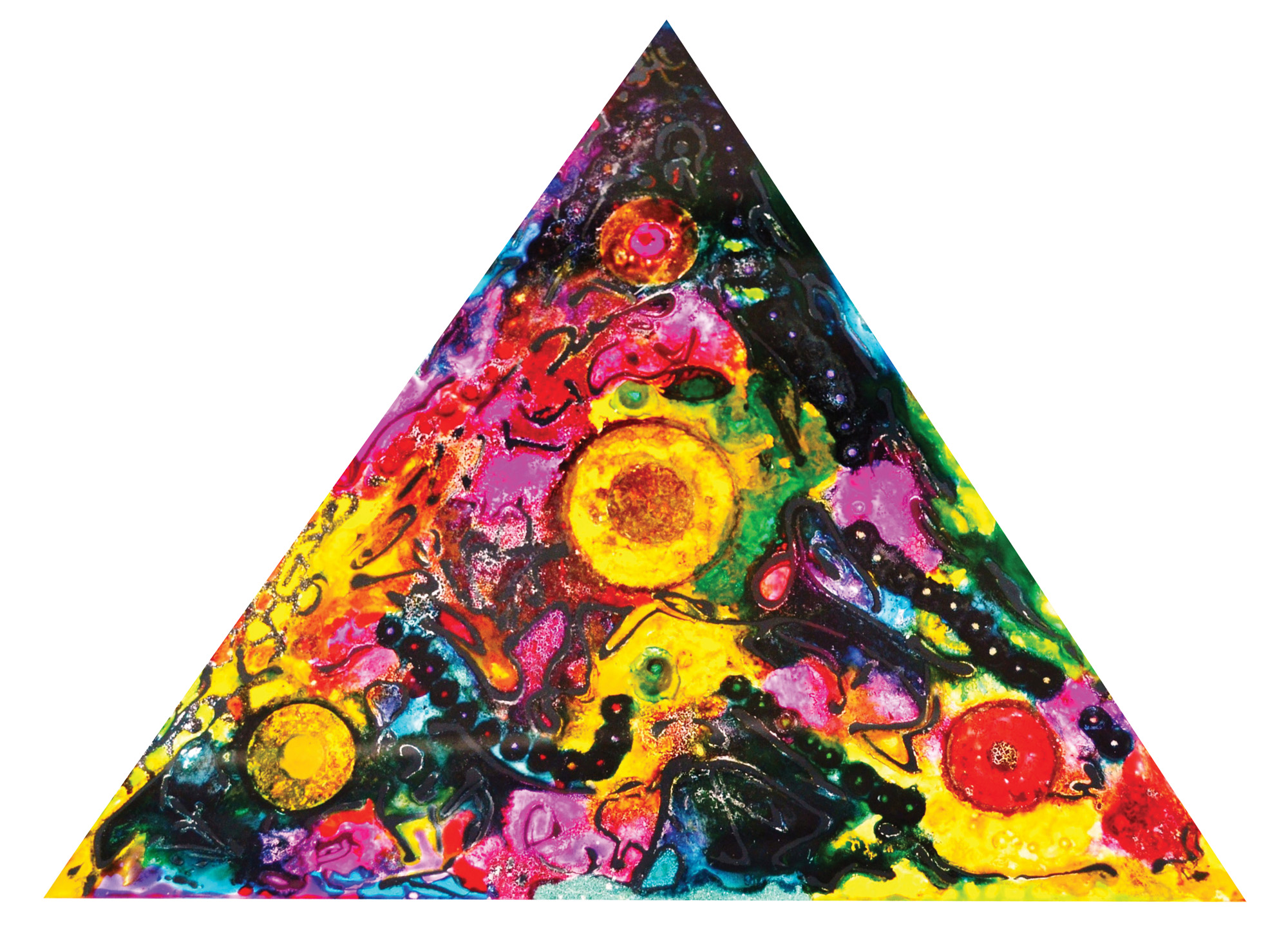 “One of my favorite earlier pieces is called Runes of Autumn. It’s one of my frozen pieces,” Draper continues. “I put it outside in February when was very cold, let it just about freeze and when it was set, I brought it indoors. While it was outside, I went out once in a while and threw some snow on it for fun. I used planes of glass to give it a sort of rune effect, with leaves and branches for impressions. It turned out to be a very beautiful piece.” Runes of Autumn has long since been purchased by a private collector, but at an exhibition at Kettering University in 2015, Draper and his painting were reunited and he was delighted to see it in good shape. A short video of this 46-piece exhibition, titled “FAR OUT,” may be viewed online at vimeo.com/146798333. “Paintings are sort of like my children. I do the best I can with them; but then, it’s time for them to go out into the big wide world and be on their own. Some pieces get purchased, some are donated and some I just have,” he says. “Rapture Aura is another of my favorite pieces and it’s currently hanging in my studio. It’s just gorgeous.”

Draper’s earlier work is unique and wonderfully done, but five years ago in Puerto Vallarta, Mexico, he found new inspiration. While visiting an art gallery, he discovered the work of an artist named Anna Romo. She was doing a lot of painting on ceramics and he was blown away by its beauty. When he returned home, he started working on two pieces of round plate glass, remnants of a relative’s long-forgotten macramé project. “It took me three months to get something I was happy with. I took the first completed piece with me to St. Paul’s Episcopal Church during First Friday ArtWalk and sold it immediately. My wife then told me that I need to do more of it,” he laughed. 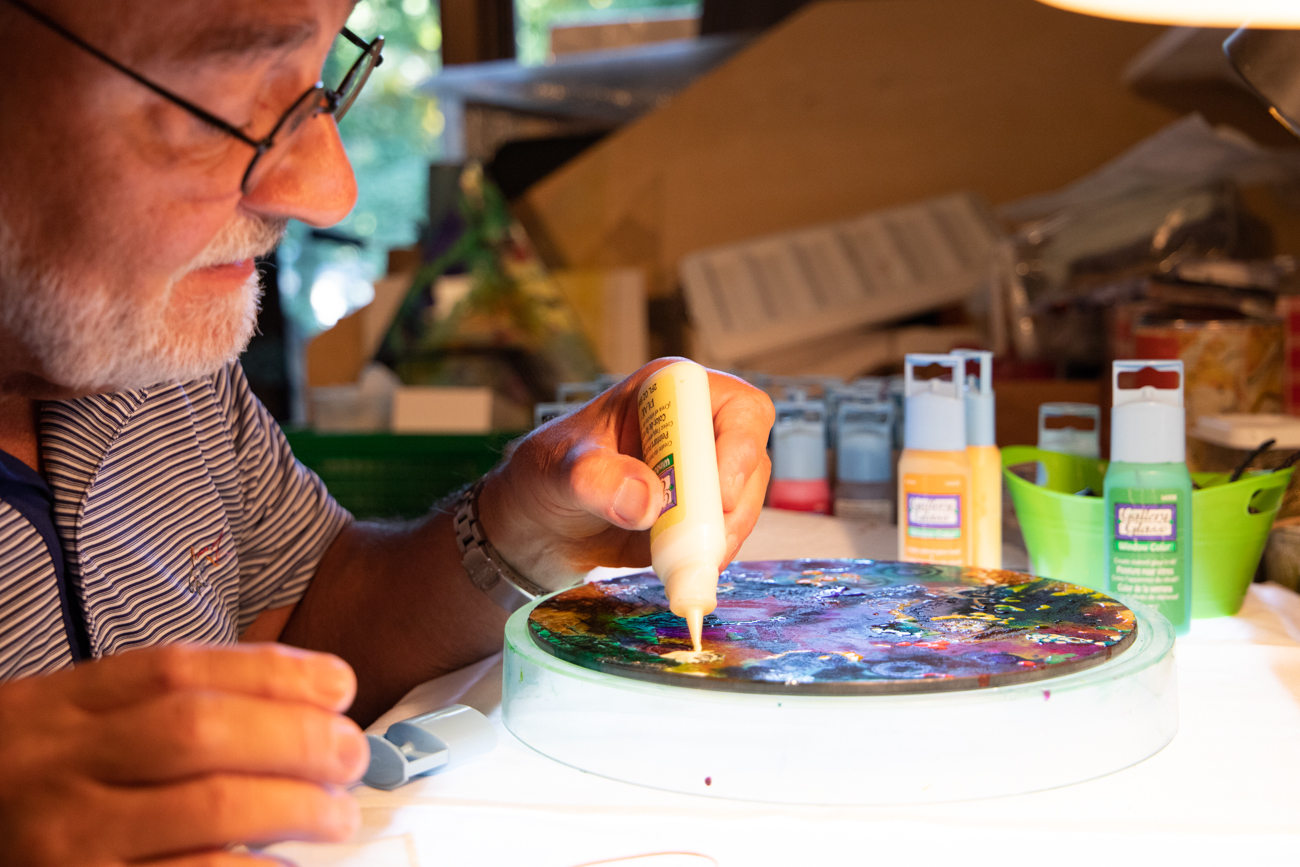 “I do what seems to be right at the
time and usually it works out well.”

Draper creates his Vitrea Art Glass pieces using found objects and the same principles that he used earlier on Yupo paper and canvas, but in reverse – meaning that on glass, his first layer will be the focal point and not the last. Another difference is that none of the paints he was using before could be used on the glass, with the exception of alcohol inks. “I put a coating for non-porous surfaces on the glass, and then add my inks. After I remove my found objects from the glass, I really start working on it. I add my gels, glues or solder and work with it to the point where I am happy or disgusted with it,” he explains. “It’s different than what I was doing in my earlier art.”

The process may be different, but the end result is just as unique. He has made, at current count, 49 pieces of Vitrea Glass and each has been a wonderful surprise for the artist. “I’m usually pleased with the result. I might have a concept to start – I have a good idea about what the found objects would do for the piece – but as far as the colors to use, I have no idea,” Draper says. “I do what seems to be right at the time and usually, it works out well.” 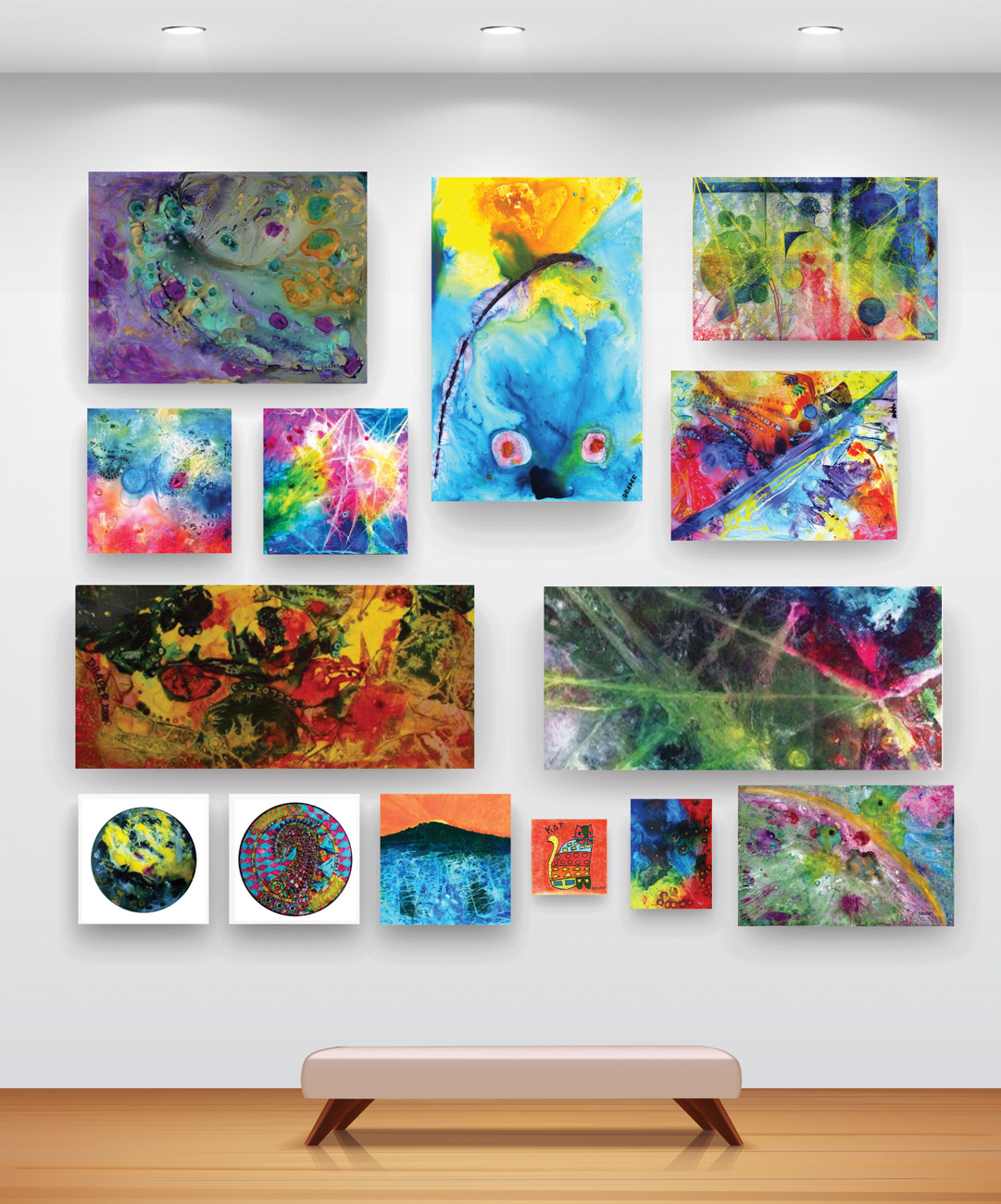 His work is not only remarkable; it can be a treasure hunt of sorts. In Draper’s glass piece, Taliesin, it’s possible to find the impressions left by a rubber band, a keychain, paperclip, piece of ribbon, Mardi Gras beads and more. His piece Time Weave contains the imprints of so many items, one would be hard-pressed to find them all. Draper loves the fun of it. “Sometimes, I call this ‘finger-painting for adults’. It’s always fun. With every piece, I push the boundaries a little further as far as what I can do and what doesn’t work. It’s gratifying to create something new.”

Draper has been a large part of Flint’s art culture, as well. He has held positions on the Friends of Modern Art Board of Directors, the Flint Institute of Arts Board of Trustees, the Swartz Creek Area Art Guild and the Greater Flint Arts Council Board. He is currently serving a second term as the FIA Founders Society President. “Flint’s art scene is very vibrant. There are a lot of people doing a lot of cool and neat things,” he says. “A lot of good things go on here that don’t make the headlines.”

Anyone interested in the art of James Draper can find his work for sale at Art at the Market and online. He will also teach you his methods for a fee at his studio using his materials. He may be contacted at ParadymeArtStudio@comcast.net.

Draper continues to push the limits with his art and is always looking for something new to include. He has developed and evolved a style that reflects the inherent beauty that exists in every little thing – be it a bead, buckle or bone. And someday, should you happen to lose a little piece of whimsy or a wee whatnot, perhaps James Draper will find it and use it to create a work of unusual beauty. 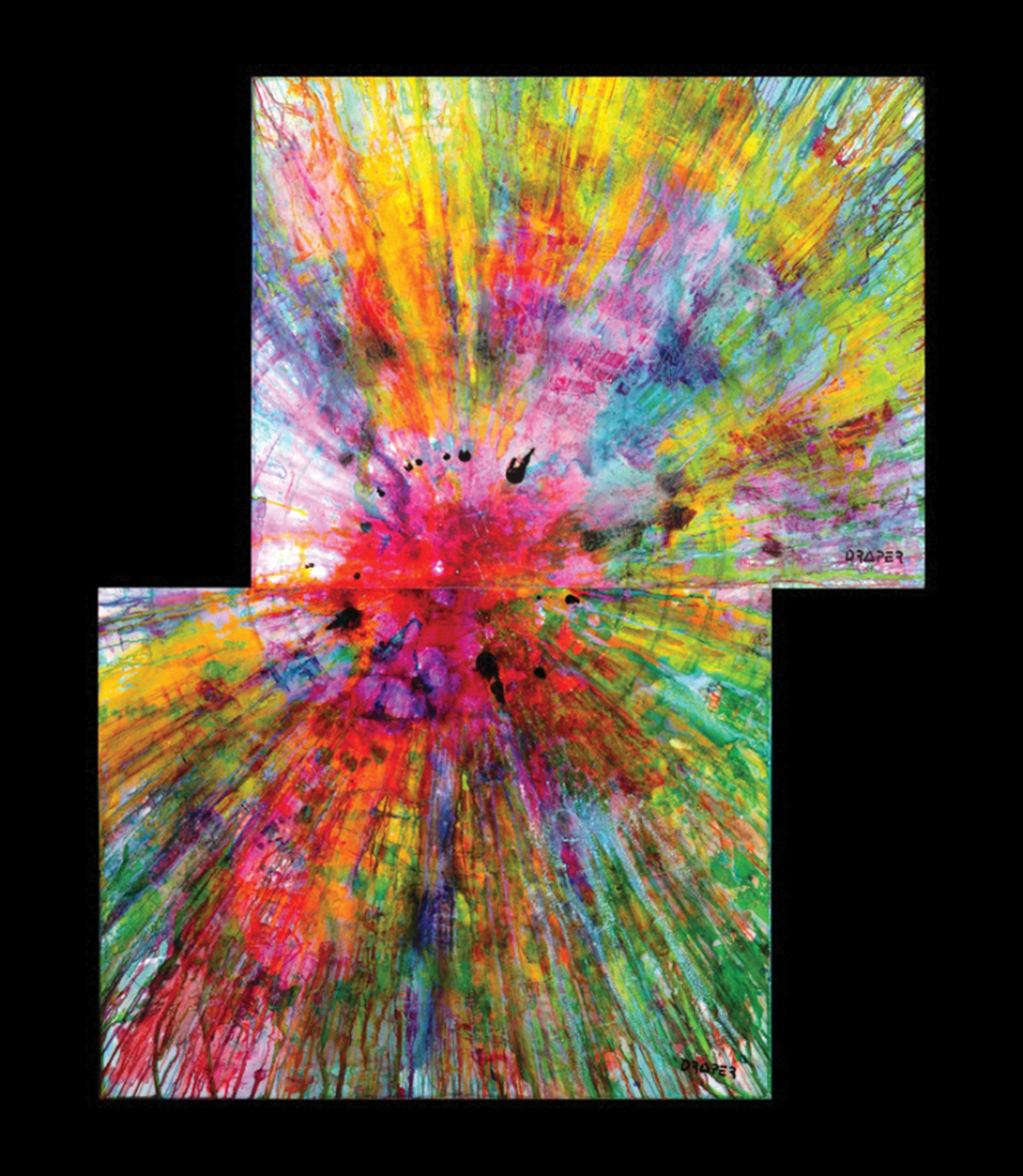 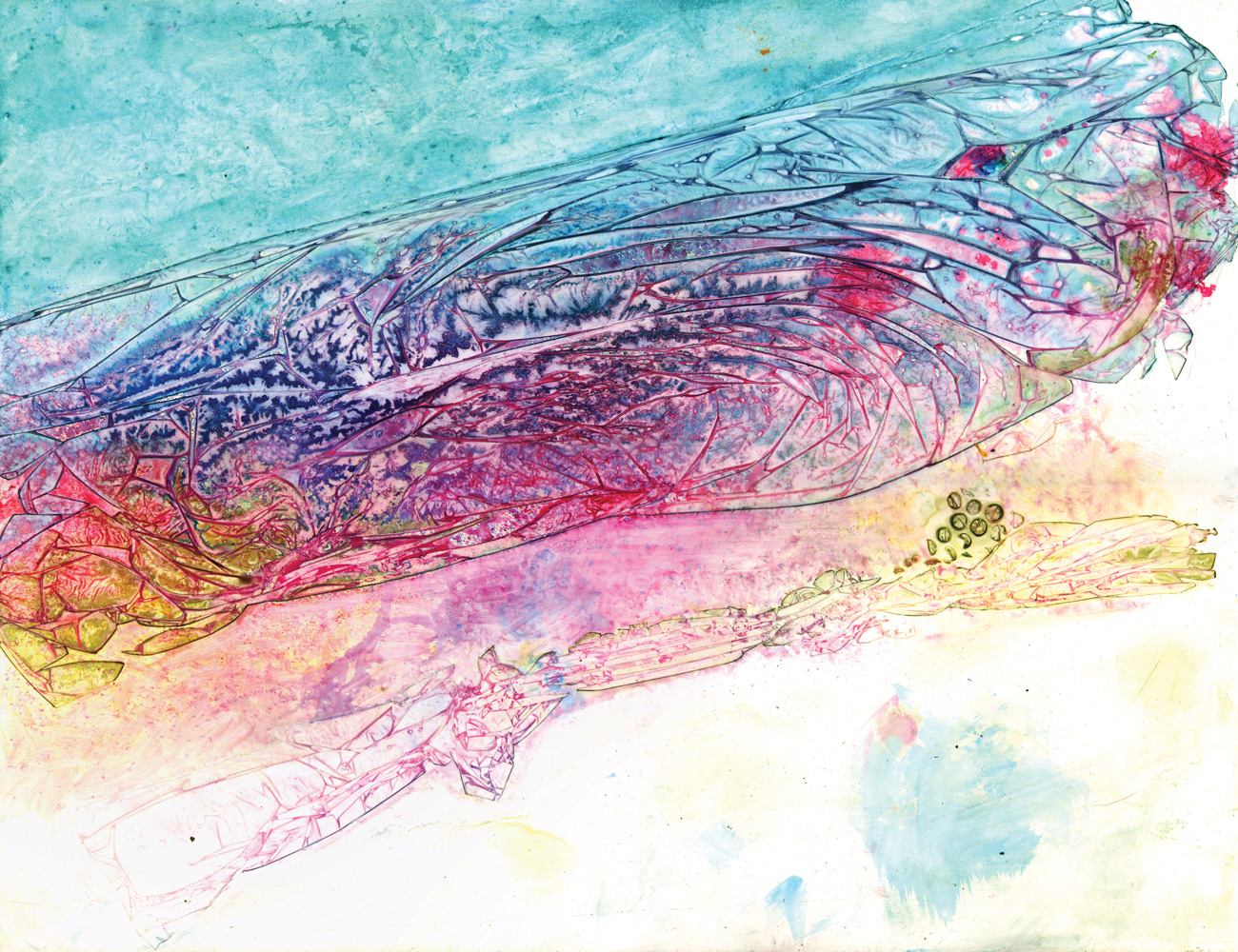 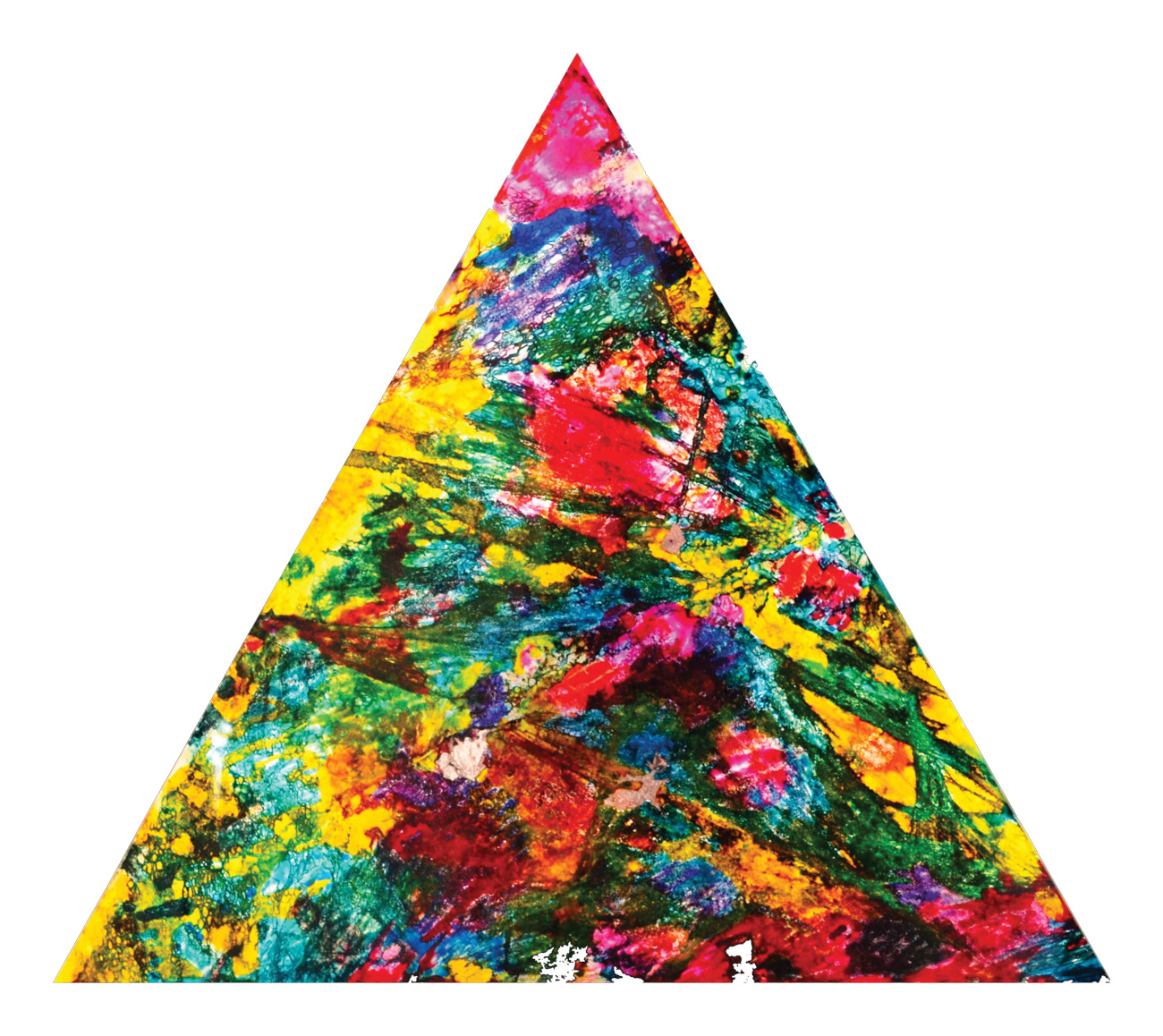 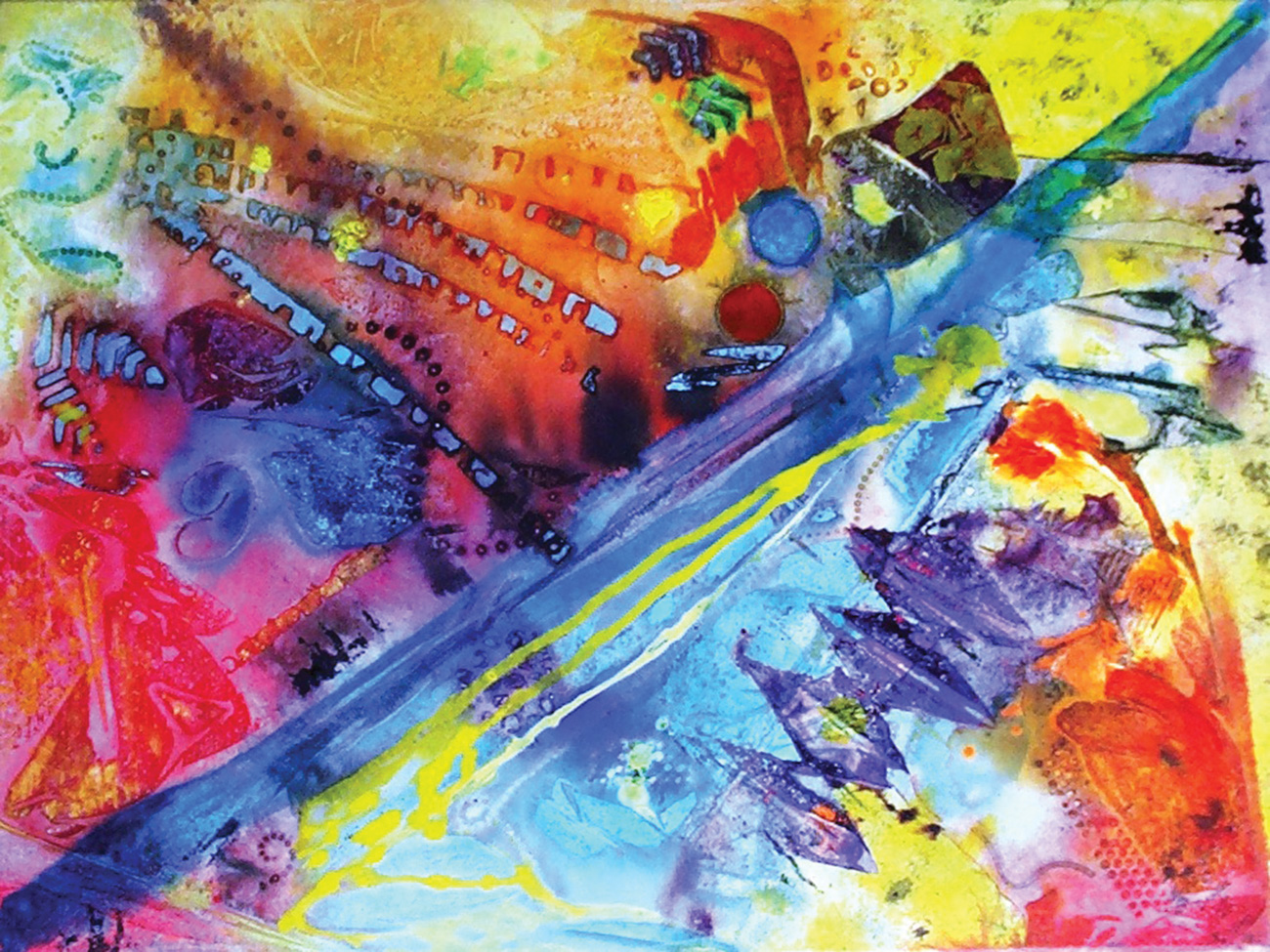 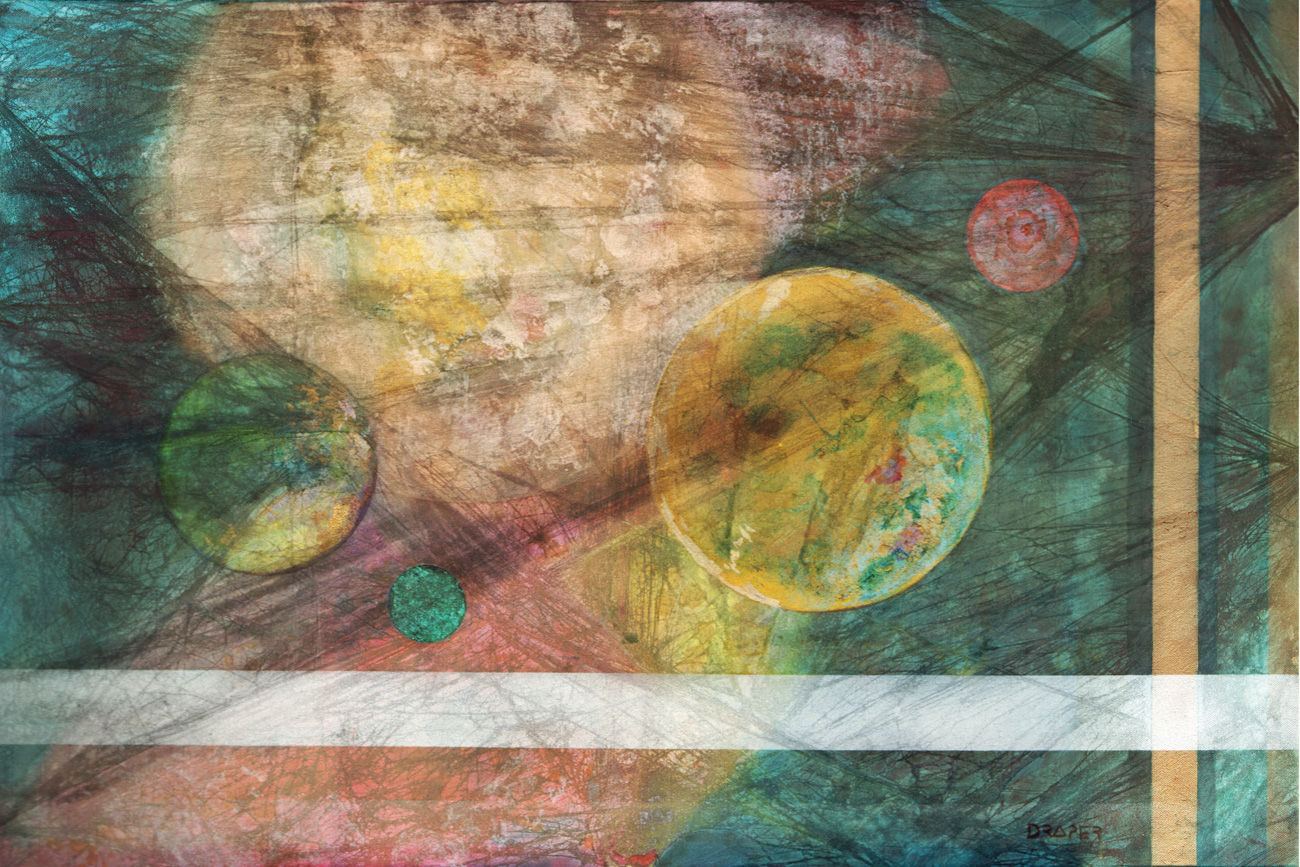