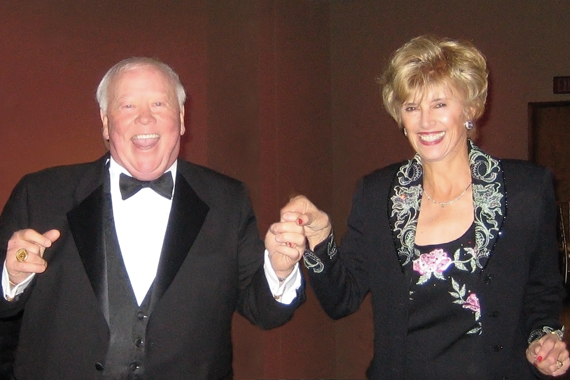 Powers Catholic High School has been on the My City radar since our inception in June. We told the story of their renovation with conviction, as we felt that the school’s remodel and subsequent move to the old Michigan School for the Deaf building was a symbol of Flint’s rebirth – a subject we take very seriously. One story remains to be told however, in the chronicle of Powers Catholic. File it under ‘G’ for Goggins.

In Latin, alma mater means “nourishing mother,” and has come to refer in English to an academic institution that shaped the persons who graduated from it. John “Jack” and Sally Goggins are graduates of St. Michael’s High School. “Dad was one of seven kids,” said Terri, Jack’s daughter. “They all grew up in Flint and attended St. Mike’s.” Jack and Sally met at St. Michael’s, and Terri tells how in 1956, her dad asked her mom to marry him in front of the altar gates inside St. Michael Catholic Church. So sentimental was the moment, that he later purchased the gates as a keepsake and installed them in the staircase of their home. Jack was a star St. Mike’s athlete and later a teacher and coach there. In 2011, he was posthumously awarded a Greater Flint Area Sports Hall of Fame Service Award.

Both Jack and Sally had a deep faith, and determined that their children should receive the same faith-based education they had obtained. Jack was involved with the organization and building of Luke M. Powers Catholic High School in 1970, and when St. Michael’s closed, the couple poured themselves into Powers. In Powers, they recognized an institution that would enrich their children’s education with a strong moral foundation the way St. Mike’s had shaped them; as the years passed, all six of Jack and Sally’s children and eight of their grandchildren graduated from Powers, and there are three yet to graduate. The couple were avid fans and regular attendees of all Powers sporting events, as their son Andy remembers: “Mom and dad spent most of their time in the Powers Catholic High School gym,” he said, “They had so much love for the school. Dad made it to every game, even when he was in a wheelchair.”

The Goggins children reminisced about some of their fondest memories of their parents. They described their father as a very open and caring person who shared all of himself with everyone; proud, although not saccharine. One memory shared by the family that demonstrates his straightforward, no-frills parenting style is the “one-hand clap.” Andy explained that whenever anyone garnered special recognition or accomplishment in their respective activities, it was recognized by Jack with a single clap. He would say, “Let us give one clap for…” and in unison, all would respond with one clap. And that was the end of the acknowledgement.

“Be Ready!” These are the words on the grave marker of Jack Goggins, and they have significant meaning for the family, says Andy. When Jack attended a sporting event, he would always yell from the stands, Be ready! “He wanted the athletes to always be ready – for any situation,” Andy explained. Jack said this statement applied to more than just sports; it was a life philosophy. “Always be ready for whatever situation life presents. You’ll never be caught off guard and always prepared to do your best.” So, in honor of his father, when Andy was attending a football game the first year after Jack passed, he yelled, “Be ready!” throughout the entire game. One Powers parent, Sharon Cramer, asked Andy, “What kind of cheer is that?” Andy then explained the meaning behind it, and Sharon was moved to make “Be Ready” signs that she and other spectators carried to sporting events in Jack’s honor.

The family’s love for the dear old school prompted them to cultivate its growth and success, and today, their dedication lives on through the Goggins Family Foundation, established in 1998 as a way to formalize their charitable gifting. After 54 years of marriage, Jack and Sally passed away in 2010, exactly one week apart. At that time three years ago, in their memory, the foundation and all six of the Goggins children gifted Powers with the single largest donation the school has ever received.

This month, the Field House – containing the school’s gymnasium, auxiliary gymnasium, weight room and locker rooms – will be dedicated in honor of Jack and Sally’s unwavering devotion to Powers. The dedication will take place between the boys’ and girls’ basketball games at approximately 6:30pm in the gymnasium, according to Bill Haley, Director of Genesee County Catholic Schools. “I can’t think of a family that has been more loyal to Powers,” Bill says, adding that a video capturing the Goggins’ love and energy will be shown at the dedication.

A special plaque will be installed bearing this inscription: This building is dedicated to Jack and Sally for their lifelong support of Catholic education, their love for all things Powers, and their cheerful enthusiasm at sporting events. No matter the sport, no matter the weather, they were always in the stands as loyal, loud-and-proud Chargers. Most of all, they were a blessing to our Powers Catholic community for 40 years. Bill says this tribute is both true and fitting. “Jack and Sally’s lives were centered on the Catholic school,” he says, “They have been the number one supporters of the school for 40 years. They were a constant presence at all the games and truly deserve this honor.” One would be hard pressed to find a family more supportive of Powers than the Goggins, and their dedication is rooted in deep, unswerving love.