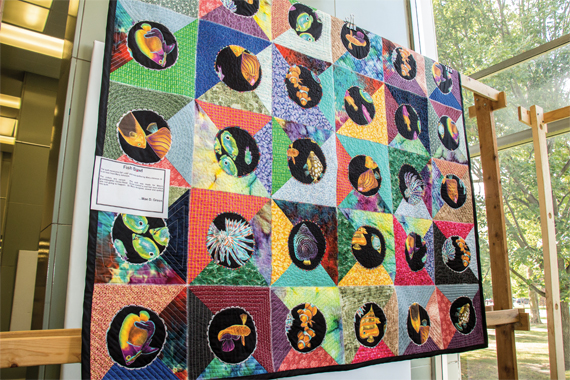 The Flint Festival of Quilts was perfectly timed this year, as the weather began to turn chilly on the second weekend of September, just as the event was taking place. Quilters displayed their works of art throughout Flint from September 12-15. The exhibition at the Flint Public Library featured quilts created by members of the Flint African American Quilters Guild. Ranging in design from traditional to wacky, every quilt was a one-of-a-kind masterpiece, designed and made with love and care. One quilt made by the FAAQG, called “Rosy Stars,” was raffled off. The lucky winner was Sonja Garth, whose sister put her name on the ticket and is now sending it all the way to Evansville, Indiana. The weekend also included a talk by Roy Mitchell, Jr., founder of the Kings of Quilts group from Woodbridge, VA. Mitchell is an accomplished quilter who focuses on recoding the icon of the watermelon, a symbol that used to be negatively associated with African Americans.

Dianna Young, Vice President of the African American Quilters Guild and teacher of quilting basics, says that the art of quilting encourages creativity while connecting one with history. “Often, you take a traditional pattern, such as a nine-patch or a log cabin, and you change it to the way your heart desires to create something utterly unique,” she says. “Quilting allows you to express your feelings through it,” she added, “and it’s very relaxing. When you focus on what you’re doing with your hands, you don’t have to think about anything else, and the tension you carry in other parts of your life dissipates.”

The time it takes to create a quilt varies from person to person, but Dianna says the end result is an achievement worth the effort. “It becomes part of you, and sometimes, a pattern just comes to you, even in the middle of the night!” As a teacher, Dianna encourages people to take her class at the Sylvester Broome Center beginning in January. “A lot of people come to us not even knowing how to use a sewing machine, but we set them on their way to making their own quilt,” she smiled.

To those interested in a new hobby, it may be time to try the age-old tradition of quilting! Contact Dianna Young at dianna4501@att.net for more information about quilting classes and Quilters Guild meetings.

Are you interested in purchasing photos from this story? Go HERE and select the “Festival of Quilts” category.