“I started drumming at the age of five – my father bought me a drumset for Christmas, and the rest is history. I’ve been playing ever since.” Watching Eugene McBride play, it’s abundantly clear that drumming is his passion. Today, he lives the life of a professional drummer, traveling the world and playing with a long-list of other professional musicians.

McBride’s musical beginnings are rooted in gospel music, playing at churches here in Flint. “I feel like a lot of musicians start out playing in church. It helps for sure,” he says. Observing him playing, however, one would find that his style looks completely different from what you’d call typically “religious.” Sometimes, it’s an all-out fury of fiery passion; other times, an immensely complicated, chilled jazzy groove. The energy is bursting, the drum-fills are mesmerizing, and the technicality is mind-blowing. Each hit is accurate on an anatomic level, exactly on point with a myriad of other drums and cymbals crashing around him. If you weren’t watching it happen right in front of you, you’d think multiple musicians were playing the drums. While it’s not exactly what one would call church-style, McBride found a way to incorporate it. “Playing in church, they pretty much let me cut loose. It’s kind of like a fusion,” he says.

One significant turning point in McBride’s career was the 2009 Guitar Center Drum-Off, a competition that took place in over 50 cities before a final round in Los Angeles. McBride’s entry – which has nearly 150,000 views online – landed him second place, beating out over 4,000 other drummers. “That video is so old now,” he says with a laugh. “Looking back, I bet I could have done better.” Even so, the Drum-Off propelled McBride’s career forward. He landed sponsorships with Pearl drums and Sabian cymbals, and the door was opened to playing gigs as a professional musician. 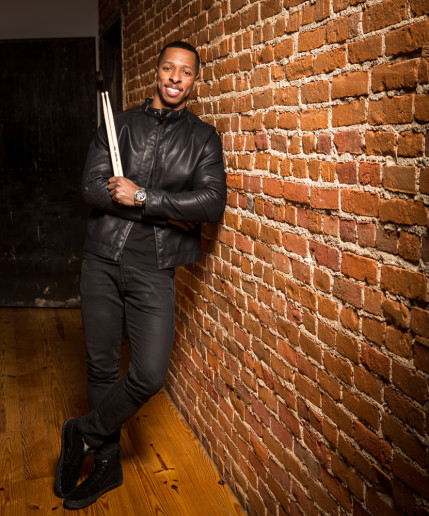 In 2011, McBride was playing at a music festival in Ohio featuring the professional jazz flutist, Alexander Zonjic. Zonjic saw McBride play with the Mott College Steel Drum Band, and loved his performance. After the show, Zonjic got in touch with McBride, landing him his first professional gig as Zonjic’s drummer. With the door to a drumming career open, his success snowballed. Gigs and sponsorships continued coming in, and he continued honing his skills. He has now shared the stage with a long list of professional musicians, including Keiko Matsui, Peter White, and even Kenny G. “I started playing with Kenny G about three years ago,” he says. “Whenever he’s in Michigan, he asks me to play some shows with him.”

The life of a professional drummer means constant travel – this past year brought McBride to a number of places he’s especially fond of. Here in America, some of those spots included San Diego and Los Angeles. He also had a number of international gigs in Europe and the Caribbean. “I like Europe, because it’s a whole other style,” he says. One of his favorite spots to play is Cancun, where’s he’s played festivals with legendary soul/R&B artist, Barry Ivan White.

McBride keeps a very busy schedule, and things don’t seem to be slowing down anytime soon. The next big project on the list is his own album. “People ask me when I’m going to put out my own music. I’m always on tour and playing with other musicians; but it’s time,” he says. McBride plans to feature a number of musicians on the album, including vocalists. He is currently writing and producing the album, playing both drums and keyboard. “I’m trying to get better on the keys,” he says with a laugh. The album will be a mix of R&B, soul and jazz influences, complete with McBride’s signature drum skills.

Aside from the album coming out, McBride has a number of other projects lined up, as well. Mama Sol, the hip-hop/neo-soul band from Flint, has recently picked up McBride as their drummer. He is also playing in the Flint jazz group, High Definition. On top of these new gigs, as well as the normal touring life and playing at church, McBride will soon offer drum lessons for those looking to hone their craft.

It’s a busy schedule, but McBride says he looks forward to it. “It’s always music – I almost never get a break. I’m thankful for that, though. It’s a blessing,” he says. With his career just beginning, it’s clear his passion and skills will take him to new levels.
To keep up with McBride, follow him at:
facebook.com/Genedrums/
instagram.com/genedrums/
youtube.com/user/2010gene1/