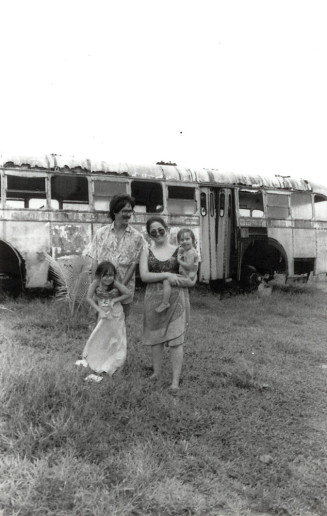 In 1997, Mara Jevera Fulmer was living in Fiji. Six years into her position as art director, senior graphic artist and acting senior photographer at the University of the South Pacific, she was ready for a change. When a position opened up at Mott Community College, she boarded a plane to Flint. It wasn’t for just any position that she moved from her tropical island home – it was for the singular opportunity to develop and found the graphic design program at Mott Community College (MCC).

Originally from New York, Fulmer was never one to shy from a challenge or sit still too long. Holding a Bachelor of Arts in Fine Arts and Journalism, Master of Arts in Advertising Design, Master of Fine Arts in Studio/Graphic Design and a Doctorate in Community College Leadership, Fulmer’s full list of additional projects, exhibitions and accomplishments is impressive and worth discovering, although far too numerous to mention here. But, how did her art career bring her to Flint?

Inspired in the 70s by the journalists of the Watergate era, Fulmer began working at a local newspaper, the Troy Times Record, through a career prep program in her senior year of high school. “I was struck by the idea that journalists can have power to make positive change,” she explains. “The problem was that you couldn’t major in journalism at the university where I planned to study,” she continues. But, the “problem” of having to choose another major in college only served to enhance an interest that would develop over the years – combining her love of the written word with visual art.

At the University at Albany/State University of New York, Fulmer declared art as her major and studied photography. In her first month at the university, she applied for a job as a “copykid” at the Albany Times Union. As a college senior in a moment of panic over job prospects, and impressed by what she saw at her job, Fulmer took on another area of study, commercial art. “I saw people at the newspaper making layouts with beautiful typography and asked them where they learned to do it,” she remembers. “They said I could learn it at an area junior college. So, I cross-registered through the university and took their entire program, transferring the credits back to my school. I graduated with that along with photography and journalism … and still didn’t know what I was going to do.”

Yet, knowing what you are going to do is not an indicator of success. Fulmer went on to follow her curiosity through several experiences, including production manager for trade magazines, and as a freelance designer for publications, until she hired in as art director for the University of Albany/SUNY, where she had completed her B.A. in ’82. She and her husband Keith, also an artist, built a home together and started a family.

Always one to embrace a challenge, when a recession hit and her family realized they were going to have to sell their home and move, she says, “we figured we might as well see how far we could go.” They sold the house, and with their daughters Sarah and Anastassia, they moved to Fiji. 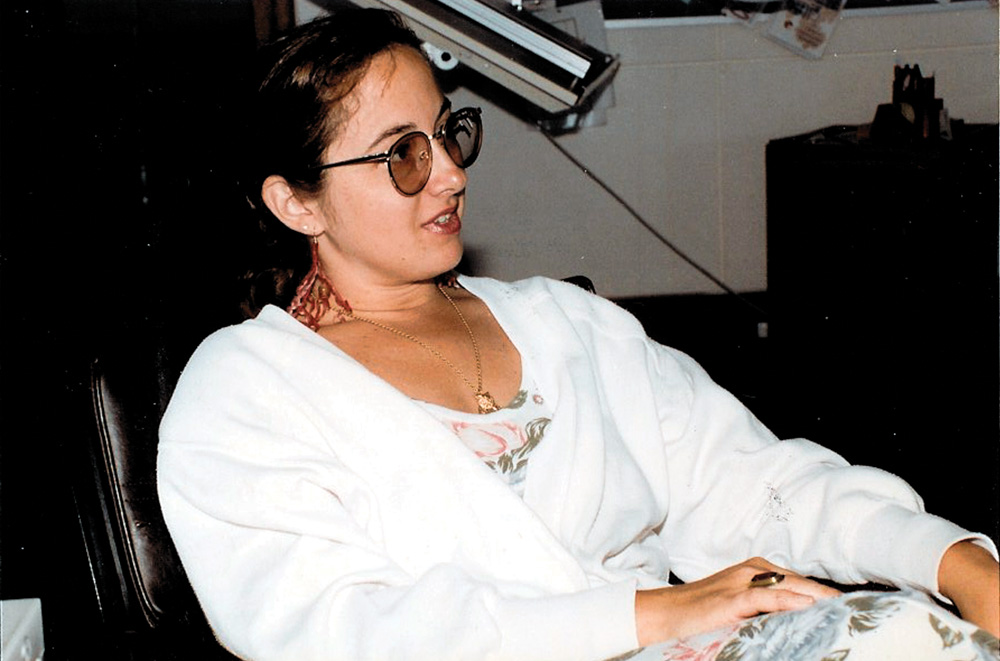 Photo by Litiana Wagalew, Fulmer in her USP office, 1992 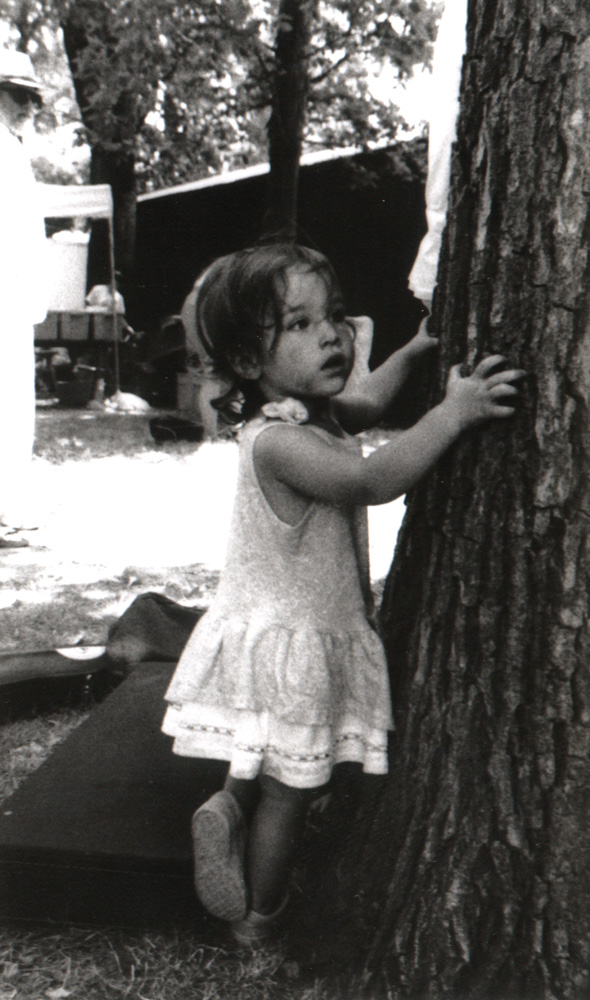 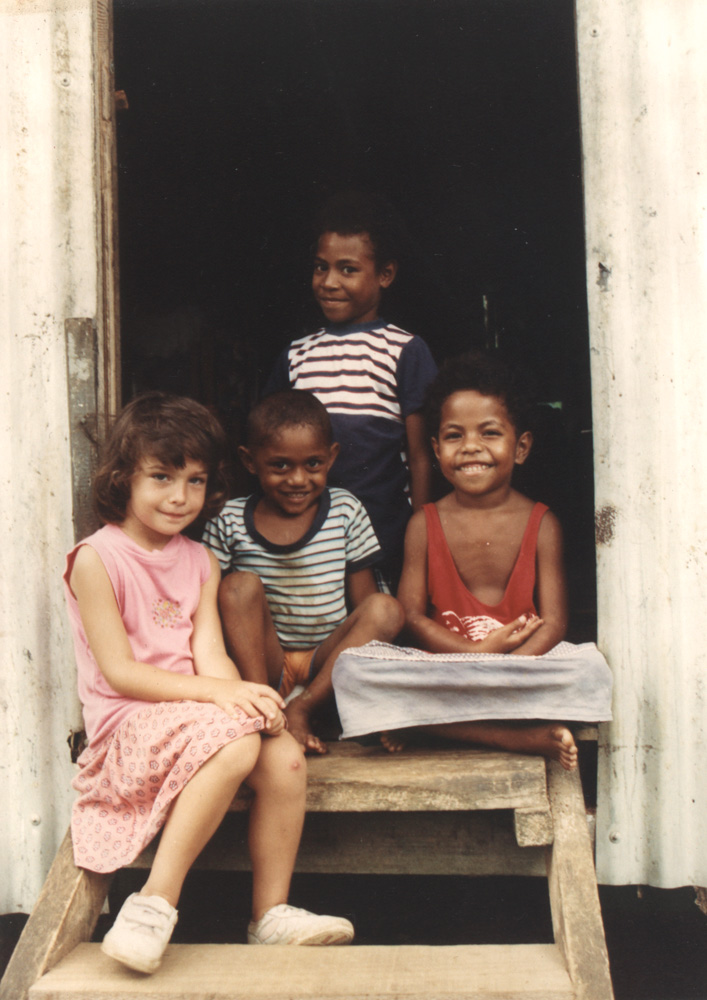 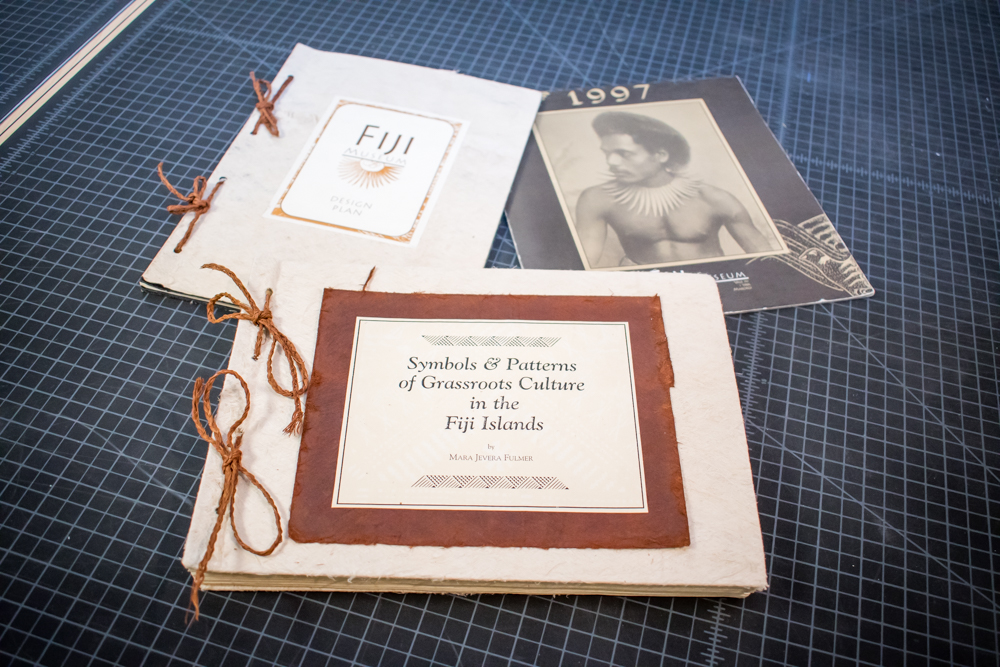 Fulmer was hired as art director for the University of the South Pacific (USP), a multinational university owned by 12 nations, that serves the Pacific Basin. “We eventually built a house there and my family loved it,” she smiles. Settling down in a tropical paradise sounds perfect and luxuriously relaxing, but Fulmer felt a “pressure to keep moving,” and enrolled in university again, eventually completing her Masters in Advertising Design through Syracuse University (SU). That program allowed her to travel every three or four months, and workshop with professionals in cities including London, Toronto and San Francisco. Her steady traveling, teaching and learning eventually led her back to live and study in the States.

One reason why she took the position at MCC was that, “it felt like this was a place where I could really make something happen, really grow, and that was far more exciting.” She was also able to relate to the resilience of the people here, saying, “they had an incredible hope in spite of all that was thrown at them – and still do. That resiliency is very admirable and something that I witnessed in Fiji. So, Flint felt like the right place for me.”

Known as a challenging professor, Fulmer’s own experience through Syracuse University stressed the importance of flexibility and thinking outside the box, which influenced her teaching in Flint. “When students here tell me, ‘oh, it’s too difficult,’ or ‘I don’t have a computer’ – many of the SU workshops were done without computers and we had to keep going, using only what we had,” she explains. Thus, the challenge was an opportunity to be innovative and overcome. “We would learn ways to get past that creative block and create the structure that would tie it all together, so that even if you spiraled around a problem, you could create really innovative solutions.” 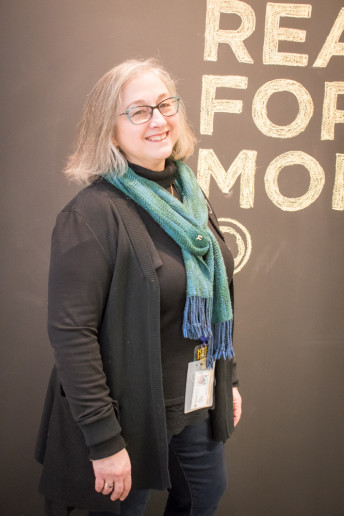 While in Fiji, Fulmer did significant work for the Fiji National Museum. “I developed an entire corporate identity for the museum, including the different galleries within it, and eventually some advertising campaign designs that they still use today some 23 years later,” she explains.

One lasting design concept Fulmer worked to protect as art director was the USP logo, which incorporates a palm tree and a sailboat and was often not taken seriously. Her job, she explains, “was to protect that logo and make sure that nobody tried to erase it. Faculty and staff were made up of some 165 nationalities, many from Europe, Australia and New Zealand, and they all came with a mostly Western perspective. They would ask me to replace the logo with something more ‘academic’ looking and I would say, ‘sorry, this is the logo for the University and let me tell you why it is important.’” She would then explain that Pacific Islanders considered elements of the logo to be culturally significant. “The symbolism for the seeking of knowledge and the expansion of knowledge and sustenance is perfect! Why does Mott use a tree in its logo? It provides all of those same things,” she says. “Put in those terms, people would appreciate it. So, that became sort of a mission and I eventually created a visual dictionary as a way to explain to people what many of Fiji’s symbols and patterns mean.” Using materials from the islands, a copy of Fulmer’s hand-made visual dictionary is still kept in the USP and University of Hawaii libraries. Published versions have been sold in Fiji, the United Kingdom, and New Zealand.

Fulmer’s focus on cross-cultural design continues, which she explains, “is sort of a blend of graphic design and anthropology.” She teaches others to recognize that how we communicate can impact people from different cultures and backgrounds. This realization began when she moved to Fiji, “The first month I was there, I discovered that I couldn’t speak the visual language – everything that was sort of my ‘go-to’ in NY no longer felt relevant. Not only did I need to learn the vocal language, but also the visual language of the people,” she explains.

While Fulmer has stayed at MCC for over 20 years, she has not stayed still. Earning her MFA in Studio Art, continuing her focus on cross-cultural communication, she began arranging study tours for MCC students to experience Fiji. She has taken several groups back to introduce them to traditional art forms and cross-cultural experiences. They arranged art shows in Fiji and upon their return, an exhibit in Flint. They often focused on intersecting the differences and similarities between life in Fiji and life in Flint, and importantly, on how the cross-cultural experiences changed the students who participated. “Our students identities changed a lot,” Fulmer says. “I still keep in touch with many of them, and they are doing so well – it warms my heart. They are the ones who proved to me that you can make a difference.” 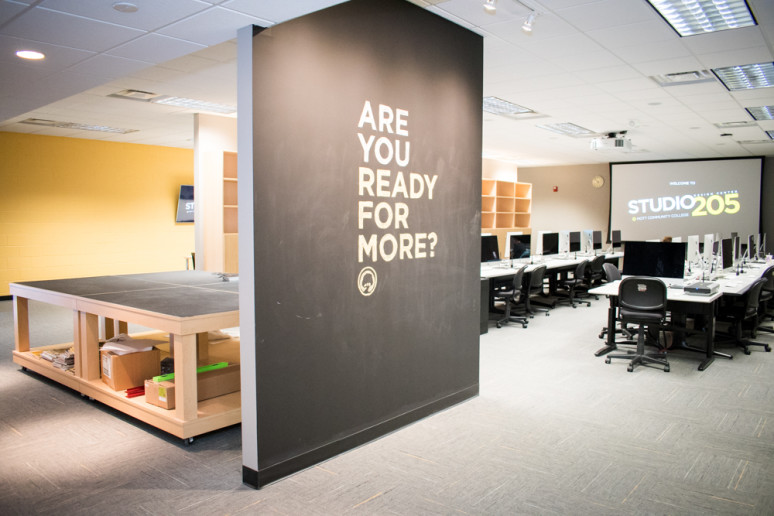 “It felt like this was a place where I could really
make something happen, really grow …”
Mara Fulmer

In 2011, Fulmer began a doctoral program and accomplished a life-long dream as the recipient of a Fulbright Scholarship to study in Russia. Sadly, she cut the trip to Russia short when her husband was diagnosed with cancer. “I came back less than a month into my trip and he died three months later. He was only 54.” Keith made his wife promise that she would finish the doctorate and not sell the property where they were going to build a home. “It would have been so easy to walk away from both. I was only 51 and a widow,” she shares. “I thought, ‘I can’t deal with this, I don’t have the skills to do this.’” In December 2014, shortly after finishing her doctorate, she married artist Steven James and immediately began designing a house. “Steven and I had shared interests and shared the dream,” she says. “Work goes on, and sometimes the universe sends you what you need.”

Since completing her doctorate, her job at Mott has shifted a bit, and she now serves as the faculty director for the Center for Teaching and Learning, creating professional development opportunities for faculty and staff. In addition, she still teaches several classes each semester including one on cross-cultural design.

Over the last decade, Fulmer has focused on the conceptual artist book. “The book as an artform is wonderful for me because it combines everything I love – writing, photography and creative work,” she smiles.

For all of her accomplishments, Fulmer hasn’t worried about finding time to get the work done. “To me, a lot of this isn’t work – it’s play. I get itchy if I sit still too long. If I have nothing to do, then I’ll go and cut paper, make some covers, and watch some movies while I sew a book. I can rest, I can do meditation and yoga, I can focus. But, I have to have something to do,” she smiles.

For more info about Mara Fulmer or to see some of her artwork, visit:

Dr. Fulmer has exhibited her work in both the U.S. and countries like Australia and Fiji and has had her work published in books about the art form. 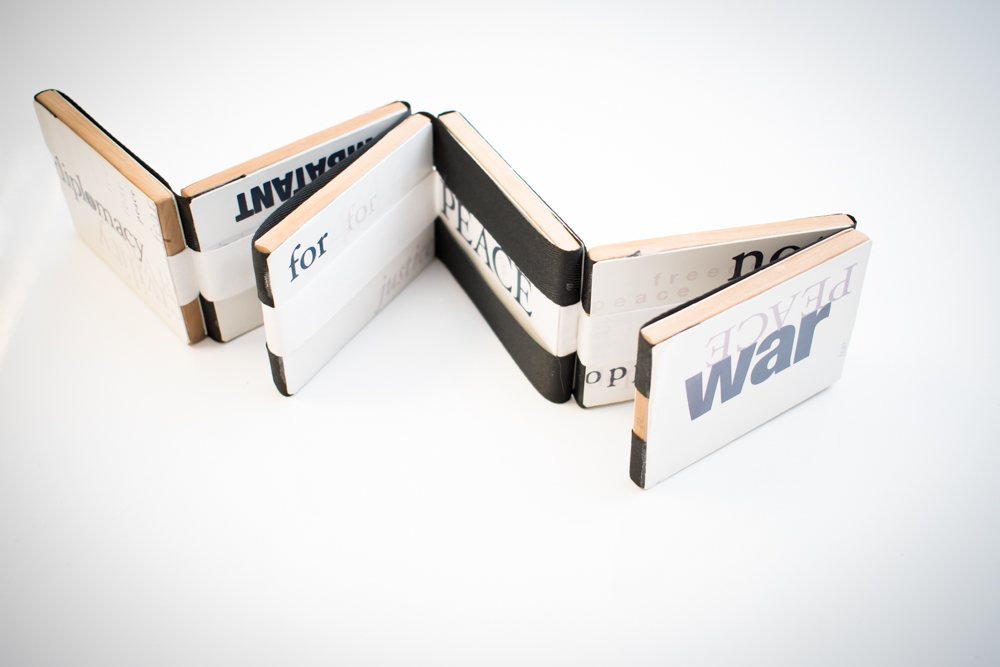 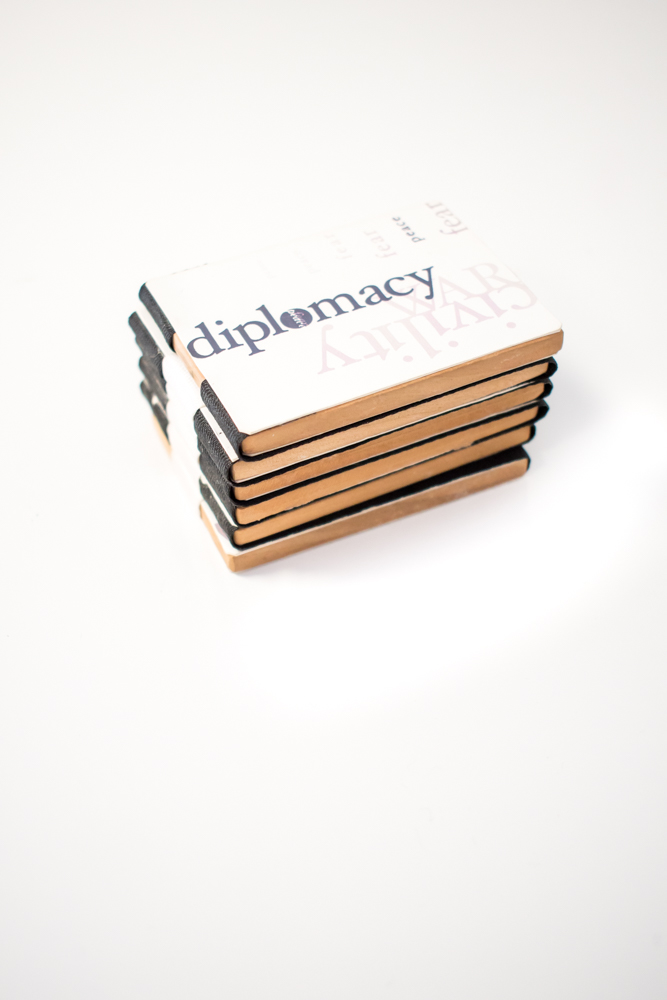 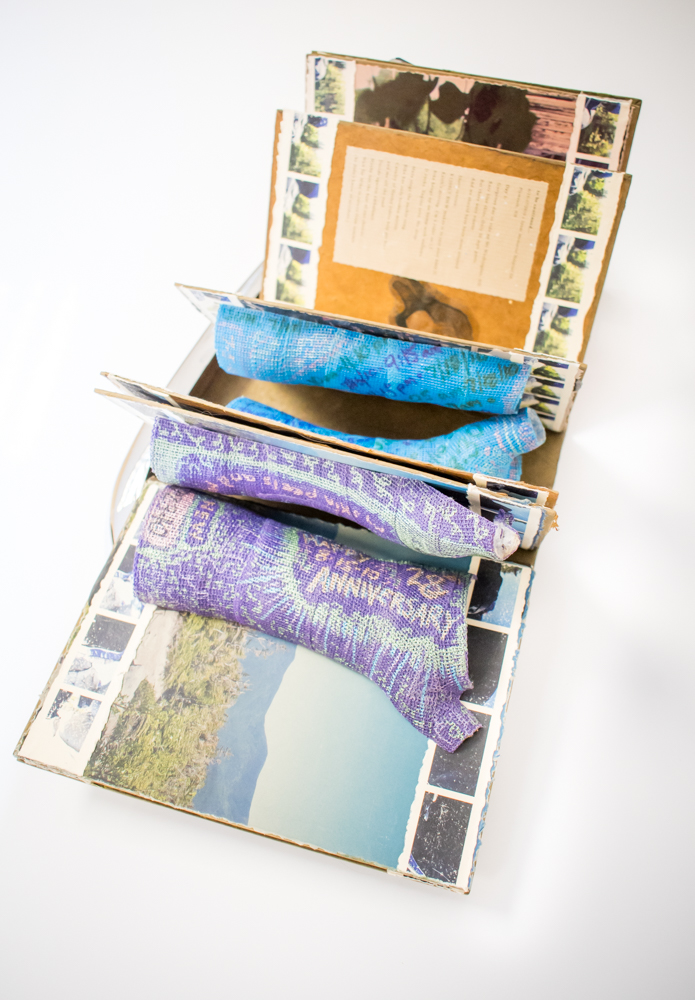 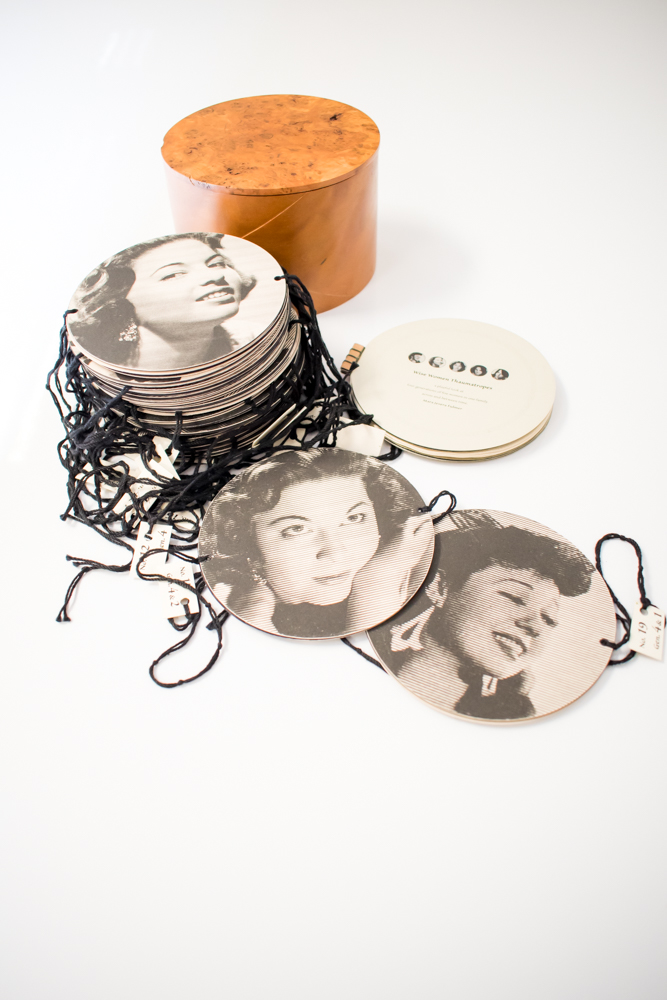 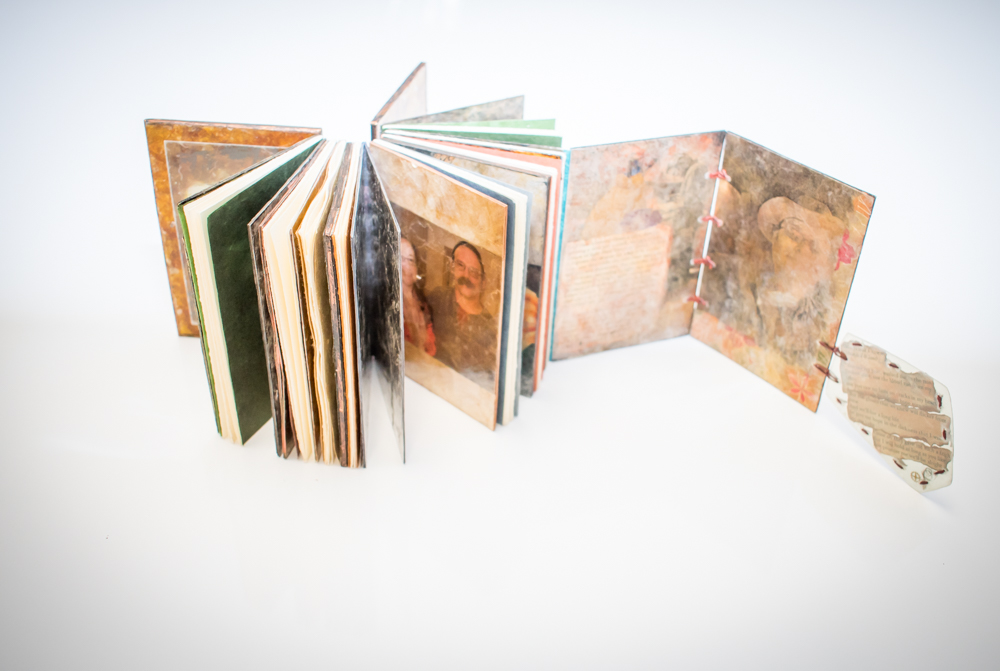 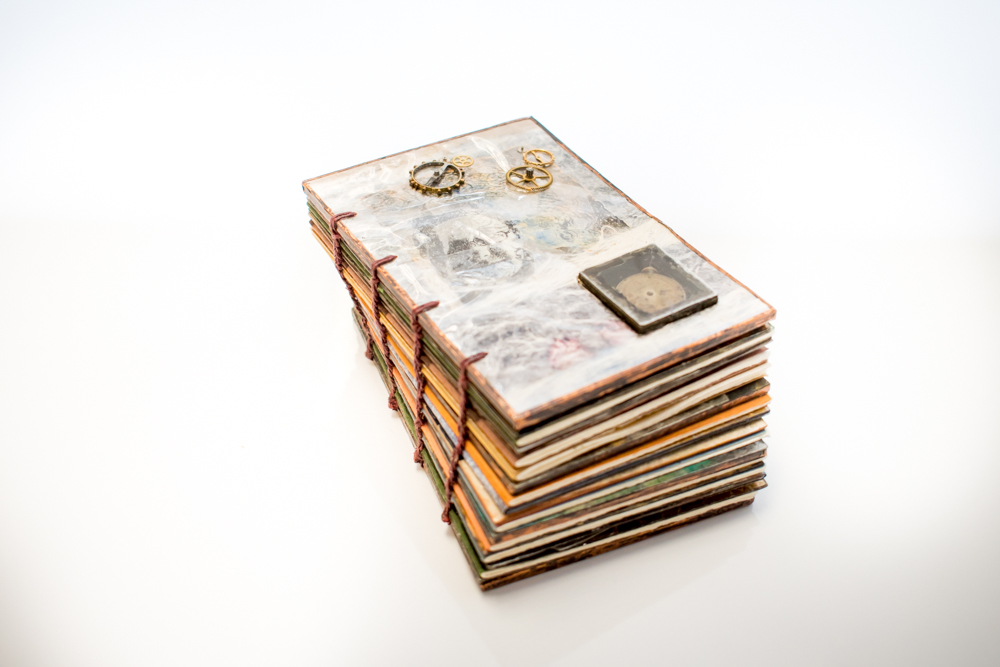 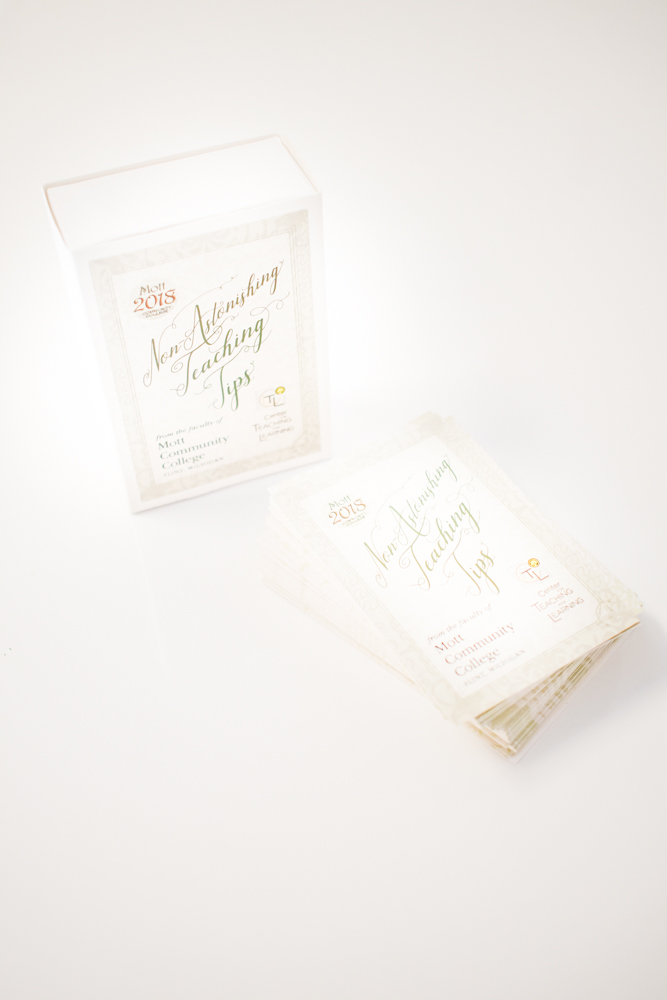