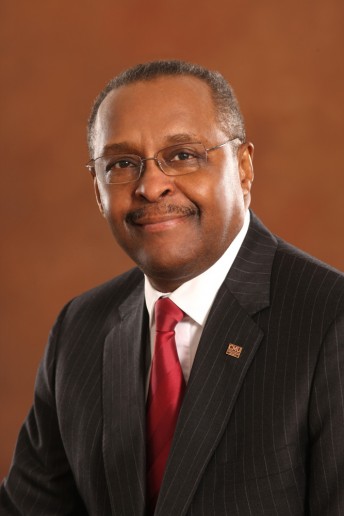 Now CMU’s 14th president, Dr. George Ross has enjoyed a long and successful career in education. He took a few moments from his busy schedule to answer questions about his Flint roots, his life, and his hopes for the city’s future.

What part of Flint are you from originally? Do you still visit Flint?

I moved to the northwest side of Flint from Washington, D.C. when I was 13. We lived about three blocks from the original Flint Northern High School, which was built in 1928 and torn down in the 1980s. I do visit Flint – not often enough, but I still visit. I have family members still in the area.

What high school did you attend and in what activities were you involved?

I graduated from Flint Northern High School. My dad was a smart man; his common sense was years ahead of his time. He said that if I played football, I would hurt myself – namely, my head. So, I didn’t play football; but I did play center field for Flint Northern’s baseball team.

Where did you go to college and what degrees did you earn?

For my bachelor’s and master’s degrees, I attended Michigan State University. I received my doctorate from the University of Alabama. During my time at Alabama, most of my courses took place in the building next to Foster Auditorium. Three nights a week, I would walk past the spot where Alabama Governor George C. Wallace had stood in the schoolhouse door to prevent two black students, Vivian Malone and James Hood, from enrolling at the University.

What aspects of education are the most important to you?

Student learning is of utmost importance. Educators need to engage students in a variety of ways to help them learn. Learning occurs in the classrooms, the laboratories and a lot of learning occurs in co-curricular activities.

For five years, I was the vice president for finance and administrative services at CMU. During my tenure, I had to navigate the single largest budget cut in University history. In 2008, I left CMU and became president of Alcorn State University in Mississippi. Shortly thereafter, CMU was in search of a new president. I still do not know how many nominations I received for the role, but it was a substantial number. The campus community knew my work history, my character, and me as a person, and they wanted me to return and to lead. On March 1, 2010, I became CMU’s 14th president. Being welcomed back to CMU in that way was my proudest achievement. On a personal level, my greatest source of pride is my daughter, who works at a university in Chicago. 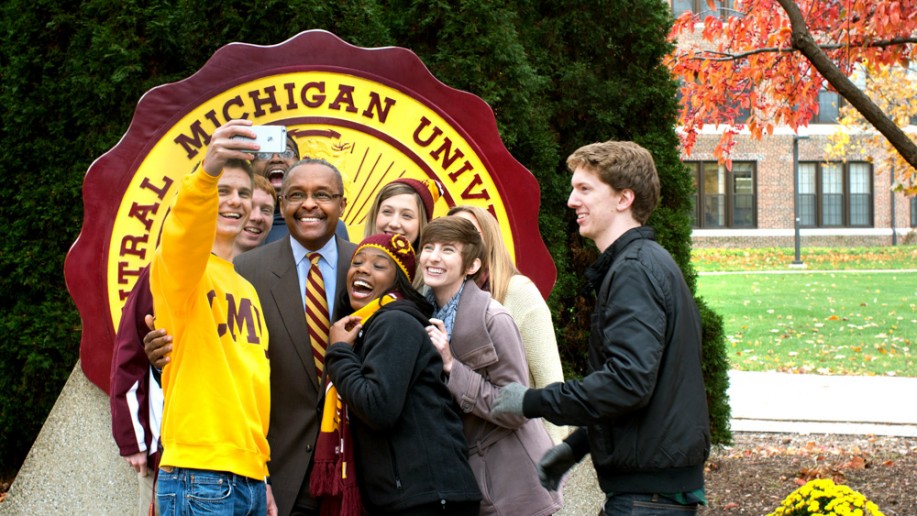 “If you look back at old records and rankings, the education I received in Flint public school was one of the best in the country. I would love to see that happen again.”

What do you most hope to accomplish during your time at CMU?

I want to make a positive difference to students. Since I became president, CMU has seen more than 31,000 students graduate. We’ve increased scholarship funding 67 percent in five years. I care about these students as if they are my own children. I call them my kids. And I want each of them to have a wonderful experience at CMU.

How did growing up in Flint shape who you are today?

When I was younger, my family was on public assistance, and each holiday season we received our clothes from the Old Newsboys organization. We didn’t have much, but we thought that was how everyone lived. My parents loved their kids and worked hard to take care of us. They taught us by example to work hard, no matter the circumstances.

Is there a special person who influenced you?

Without my high school math teacher, Miriam Schaefer, I wouldn’t be where I am today. None of my older siblings finished high school. I was prepared to drop out, too; however, Mrs. Schaefer wouldn’t let me. She convinced me to apply to Michigan State University. When I went to Flint Northern High School, it was about 50 percent black students and 50 percent white students. I ended up in college preparatory math and was one of the few black students in the course. Mrs. Schaefer cared about my education and made sure I graduated. She saved my life.

About two years ago, I was telling this story and decided to try and find Mrs. Schaefer to thank her. We began by trying to find her son, Mark – we graduated from high school together. After an exhaustive search, he was nowhere to be found; however, my staff persisted. A few days later, my schedule coordinator found Mrs. Schaefer and informed me that she was 95 years old and still lived in Flint. Over the coming days, I wrote to her, and then my wife and I went to visit her. We brought her maroon and gold flowers and spent most of the day with her.

What do you hope for Flint’s future?

I hope to see the city rebound. It has been a long time coming. Ideally, the city’s children will be surrounded by a good school system in the future. If you look back at old records and rankings, the education I received in Flint public school was one of the best in the country. I would love to see that happen again.

What do you like to do in your spare time?

I don’t have a lot of spare time; but when I do, I like to read novels by Dean Koontz and Stephen King. Additionally, if you sit me in front of an old black-and-white movie, I am incredibly satisfied. When it comes to movies, I am still stuck in the ’40s, ’50s and ’60s. Back then, there was always strong dialogue and a compelling story.

I have many great memories of Flint. My daddy drove a city bus, and there were days when I would just sit with him and ride around his route for a couple of hours. It gave me an opportunity to appreciate the city and the people who inhabit it.