So much is going on Downtown, we decided to offer you updates on three significant projects that will provide members of the Greater Flint community with enhanced access to the arts, as well as resources for pursuit of entrepreneurial endeavors.

Factory Two: After the Patronicity Campaign

Last May’s Preview Night got the community’s attention, and also marked the beginning of their Patronicity Campaign to raise funds to complete the vision of a fully functioning metal and woodshop. According to Director, Jon Hardman, “we collected funds to the tune of $62,000 which was matched by the MEDC (Michigan Economic Development Corporation). We immediately took $10k of that and bought our dust collection system so that we could actually use the equipment with good regularity. Then, we used $25k to update the electrical, so that we could power everything – because we found out that, although this building had a three-phase power service at one point, it was no longer functional. But, we used Weinstein (Electric & Communications) and got that done. So, now we have a functional metal and woodshop.” 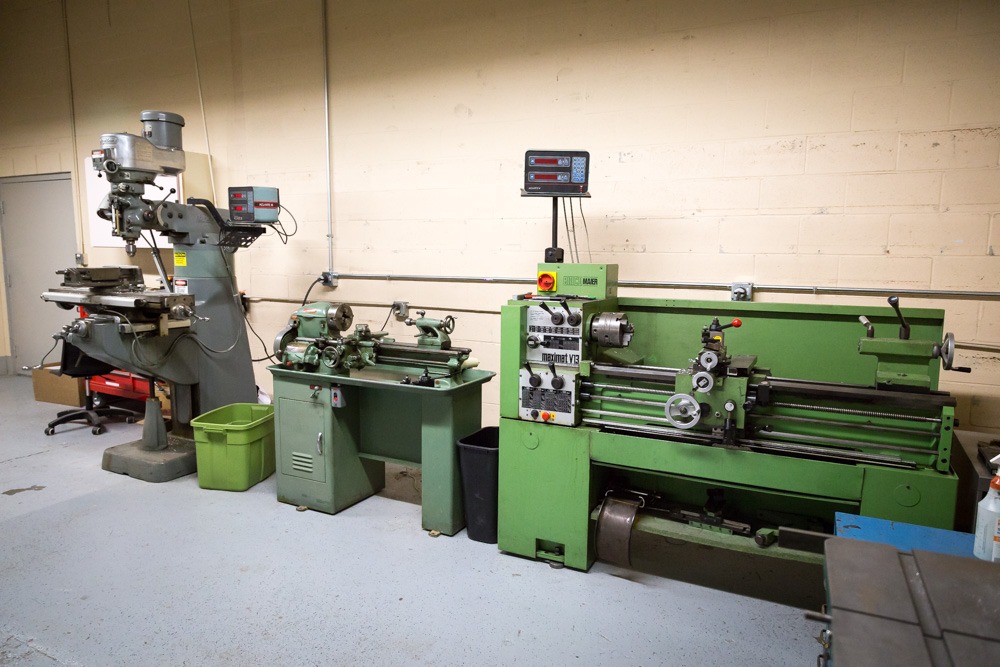 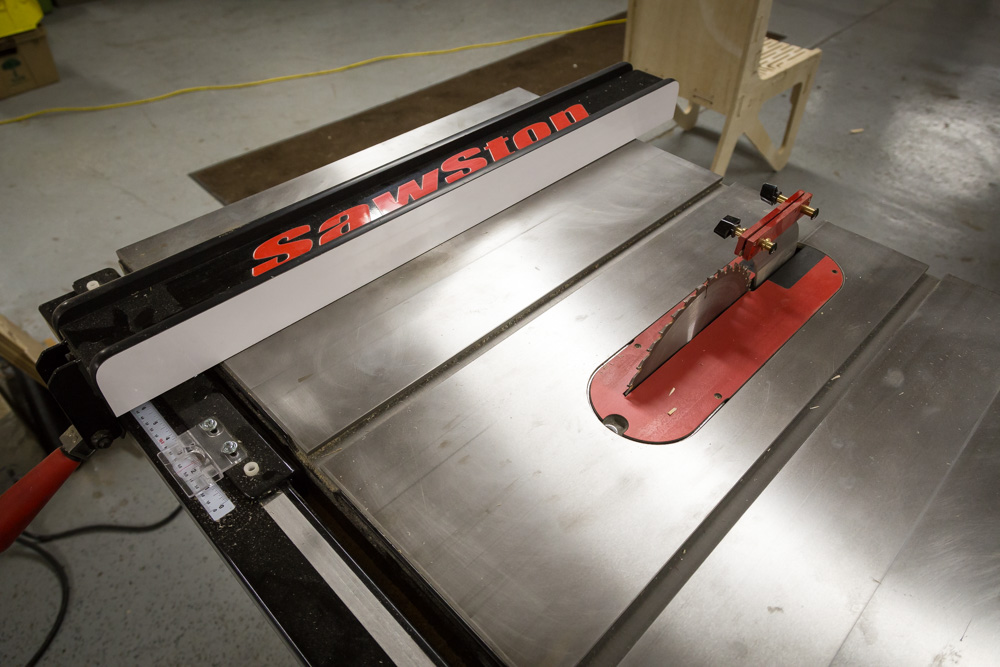 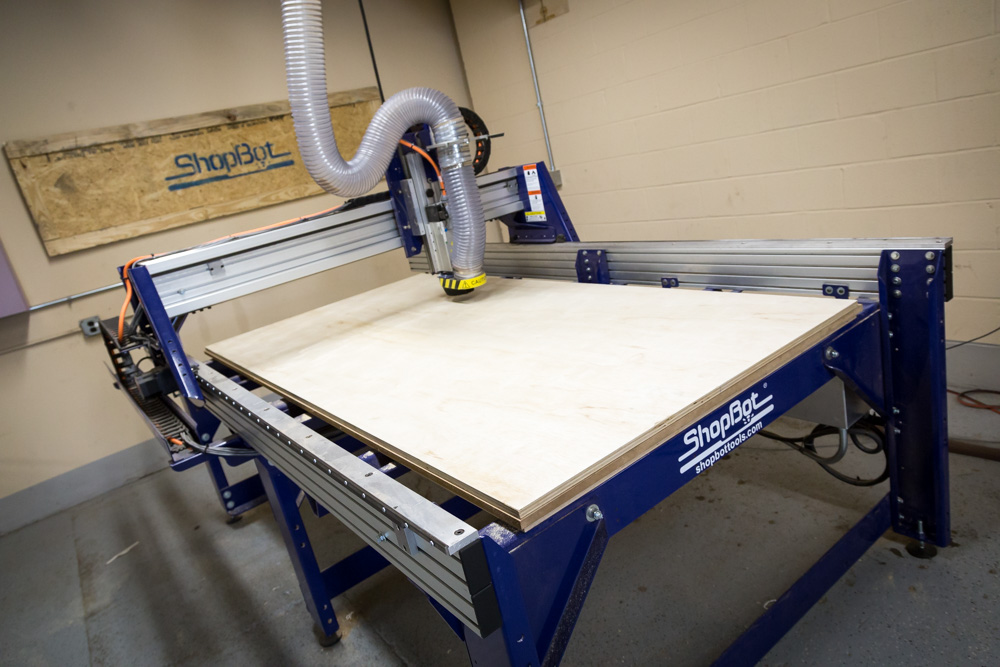 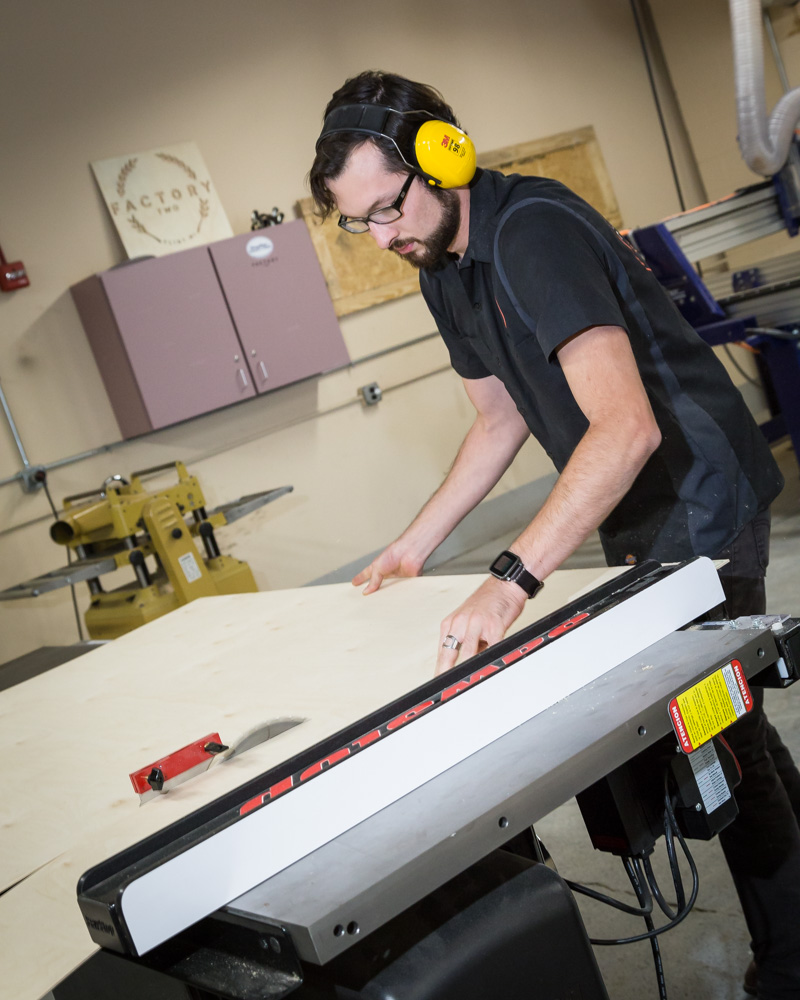 Highlight of recently added machinery available for use:

This table saw has a 54-inch fence, and a large enough capacity to cut a full 5’x5’ sheet of wood, which is critical to getting expansive projects prepped. It also has an important safety feature. Hardman explains, “a normal table saw is dangerous; people have lost fingers on traditional table saws. But this one has an aluminum brake, so that if you make contact with the blade, through conductivity, it knows that you touched it and will stop within a two-teeth rotation. It pretty much prevents you from going to the hospital – you need a band-aid, instead of a new finger.”
Shop Bot CNC – PRS Alpha 96-48

The Shop Bot is an 8’x4’ CNC router, with a 3HP head. It takes a graphic design and puts it through a CAM (Computer aided Machinery) design. Hardman informs, “the Shop Bot will then generate a tool path detailing how it needs to be cut, how deep it needs to be cut, how fast to spin etc., in order to create whatever you have designed. It allows the maker to create precision projects with high repeatability, rather than having to do it by hand each time and the failure rate that increases with that.” The ShopBot’s capabilities span from entire pool tables and furniture, to small gaming figures. Hardman explains, “with a $10 day pass, you could come in, get trained on this machine, and then have that access. The level of design capable with this machine used to only be available to people who had been doing this for 30 years and knew how to carve everything by hand. Now, ‘basement kids’ like me can sit and learn for a couple of hours, and keep plugging away until you get exactly what you want. The potential for a fairly good source of additional income is there, as well.”

Part of the Patronicity Campaign was also to develop a blacksmithing shop. Hartman says they are currently working with Thomas Henthorn, one of the Carriage Town Rehabilitation founders, to teach full fire/forge classes. They are working on the chimney in the Factory Two garage, to add a ventilation system and a smoke-stack.
Community Maker Space

Factory Two has become a place that motivates the community to gather and work together, with over 100 people registered as members, around 200-300 reservations for using the equipment, and additional community members are becoming trained in things like laser-cutting and textile screen-printing.

Factory Two has a number of additional projects with partners such as Kettering and the University Avenue Corridor Coalition. They have partnered with US Ignite, a nonprofit that brings gigabit internet to communities to open up the possibilities of that technology. Hardman informs, “Factory Two is also in working with Consumers Energy, the City, Police, and a number of other non-profits to put together the Smart City application in order to get that kicked off here in Flint because we are a decade behind other cities.” They also host many meetings for Flint businesses and community group.

Keep an eye out for the new 8’x8’ road sign they unmounted, repaired, crafted, designed and remounted. Hardman says, “we took on the sign project as a challenge to ourselves, and we are finally here.”

Flint Local 432 first reopened in 2012, “with the generous support of the C.S. Mott Foundation, individual investment and a ton of volunteer labor,” according to Founder, Joel Rash. There wasn’t a huge remodel when it reopened, it was a matter of doing what had to be done, and then making updates through fundraising whenever possible. For instance, they were part of an online fundraising campaign “which the band The Swellers really helped us win,” Rash says. “That time, we got $5,000 and we built a stage and put in a new sound deck. The next year, we got a matching grant from the Community Foundation and did more upgrades with sound and lights.” 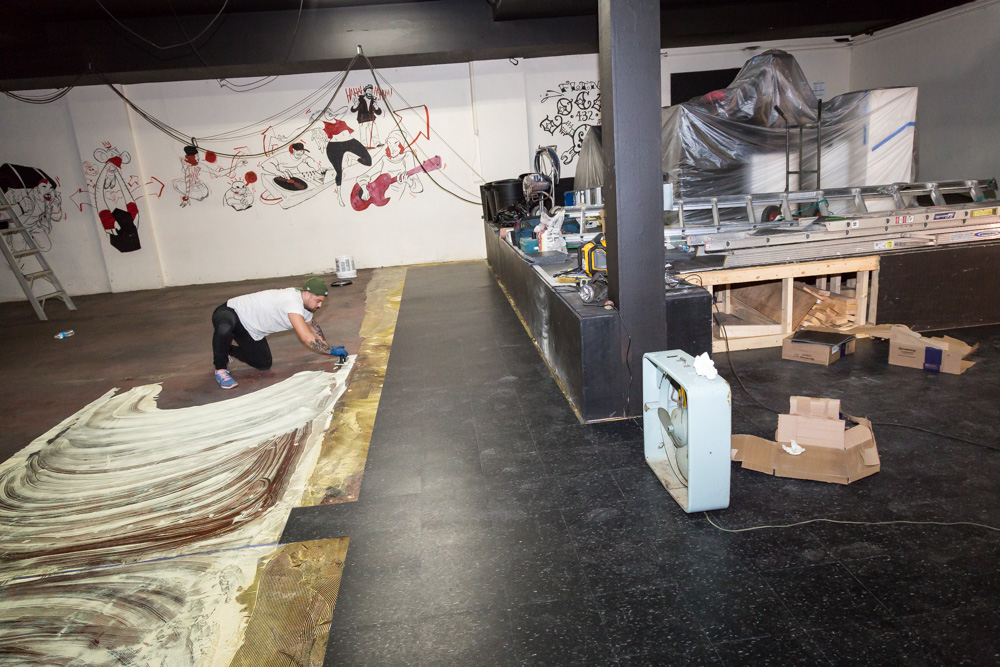 The Local was closed for a few weeks in August, which Rash says was good timing. “A lot of young people are on vacation, there are a lot of other things going on in Flint, and we want to promote people taking advantage of the outdoors, so you don’t schedule concerts every day in August if you want people to go to For-Mar or the Flint River, or go hiking. So, we took a break, and it was great timing for the latest renovations.”

The most recent upgrades are the result of a Michigan Council for Arts and Cultural Affairs (MCACA) Capital Improvement Program grant. Rash explains, “this was a matching grant, so they put up $7,000 and we matched it, with a focus on making art spaces more sustainable, energy-efficient, basically better able to represent the arts and stick around.”

They worked on aesthetics with new paint and stage curtains, moving lights, new flooring throughout and exterior paint, as well. They also plan to get better signage out front. This latest renovation project was to address trip hazards and a deteriorating concrete floor. Rash informs, “not only is a concrete floor not ideal for dancers, but as it deteriorates, it’s really dusty and that dust gets into the sound system.” The new flooring is durable, dark, and easy to maintain.

The goal is that the space at Flint Local 432 will look great for concerts, but more than that, to further embrace all of the arts. Rash explains, “when we put on a concert in here, the little stuff doesn’t make a difference – but for a spoken word event or a dance event, you need a certain kind of environment.”

Additional renovation projects will include updating the front counter and the store. “The front store is the old Bearded Lady Records space – so now, we will set up an appropriate counter and an office for the club manager,” Rash says. Three of the walls in the Local are currently painted with works of local artists Smack (Sean Mack), Charlie Boike and Pauly Everett. After the renovation, there are two more walls available to showcase others.

“It’s the kindness of others that keeps this place open,” Rash smiles. “And we’re really psyched about everything coming together.”

FIA Expansion Project  in the Works

During the summer, the Flint Institute of Arts was closed for six weeks in order to make way for renovations to existing spaces, as well as new construction. When the building reopened on September 16, the expanded Palette Café and Museum Shop, along with the recently relocated Art School Gallery were available to the public. Executive Director, John Henry, gave My City a tour through the construction project, as well as a sneak peek at glass pieces for the new exhibit. And although we couldn’t photograph the new pieces yet, they are amazing. We cannot wait for the new wing to open! 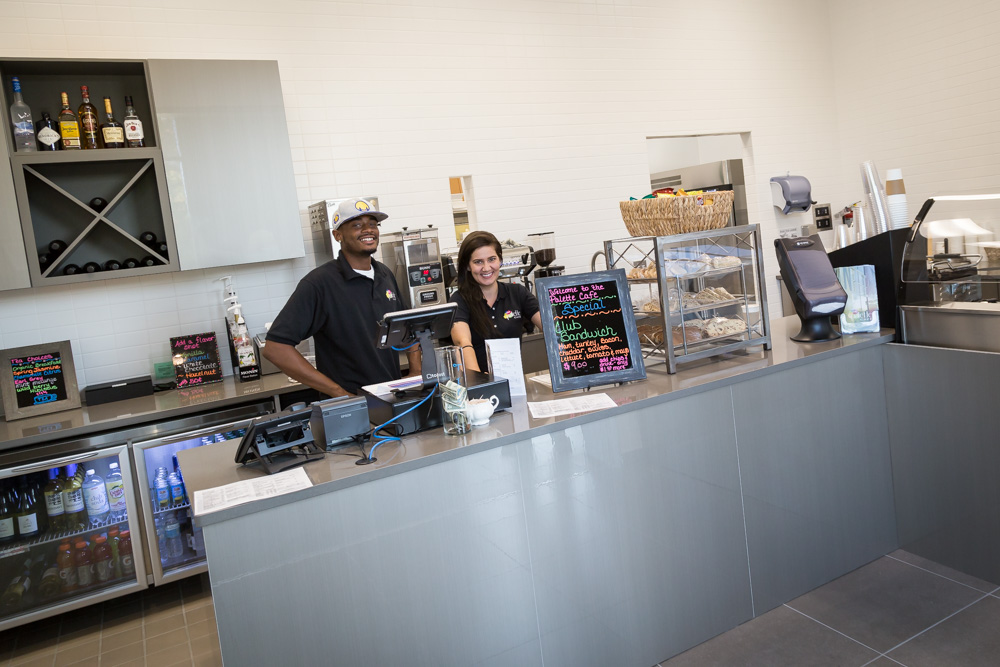 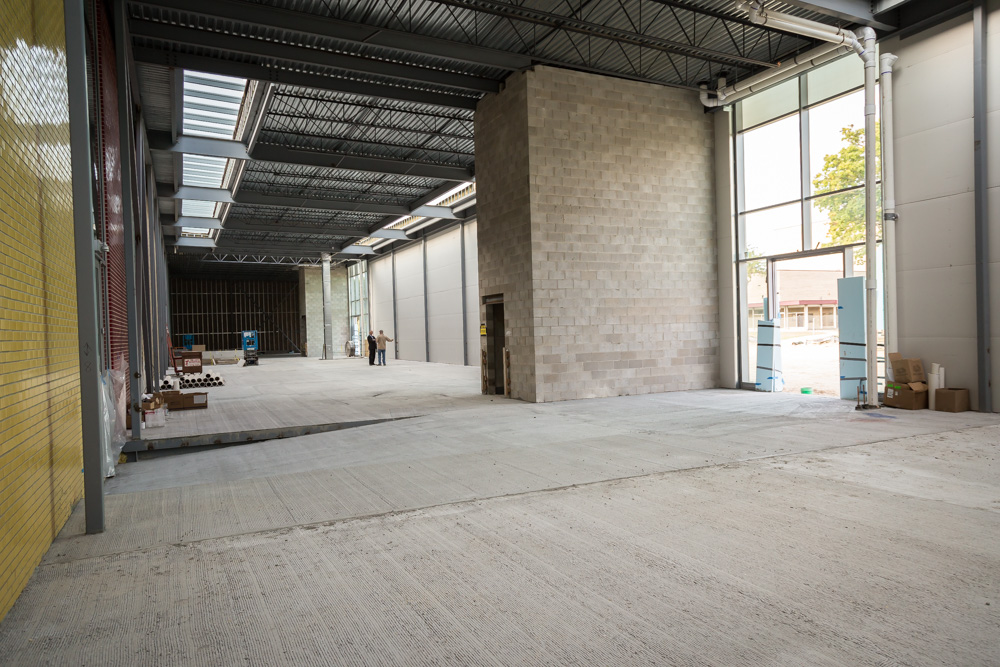 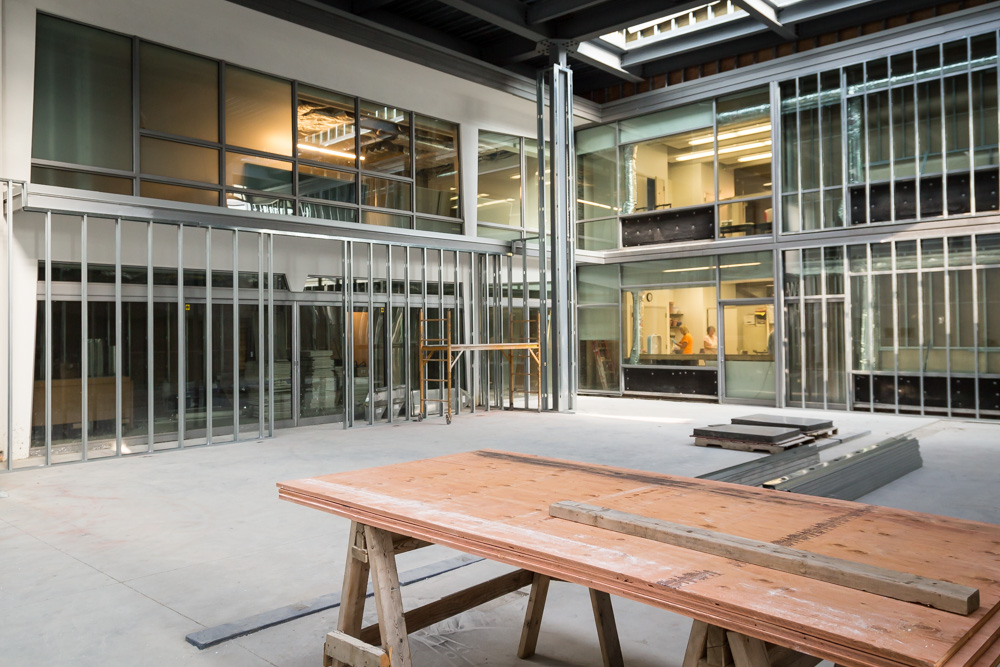 According to Henry, the new wing is set to open in April 2018, and is an estimated 10,000 feet of space with a basement storage area of around 7,000 feet. It will house a new ceramics collection with about 400 works by some of the world’s best-known contemporary artists, a stunning contemporary glass exhibit featuring around 150 works by 98 artists and representing every technique in contemporary glassmaking. The new wing will also feature a changing exhibit for emerging artists working in craft such as silver, wood or fiber.

Henry anticipates that the glass exhibit will become a highly viewed collection. He explains, “before we acquired it, this was probably the best collection of contemporary glass in private hands. In many cases, it represents the best, or biggest works the artist has ever made.” Some of the pieces are so big, in fact, they made special accommodations for them within the structure of the wing. “When we designed this room, we had to put a center support beam down from the basement area in order to place one particular piece,” Henry says. That glass piece is 8’X 11’and very thick, and although Henry explains that the piece alone wouldn’t crack the floor, the only way to move it is with a 4,000lb forklift, adding around 7-8,000lbs to a relatively small area “that would crack a floor!” Henry exclaims.

While the FIA was closed, an entire existing wing of exhibits had to be closed just to get the new pieces into the building. “It took three and a half tractor trailer trucks to deliver it, because some pieces had to be assembled. A single work of art could have been packed in up to ten wooden crates,” Henry says. Once the crates were all in, they began another project that kept the wing closed: turning the space into a temporary photography studio. Henry explains, “part of the deal with getting this collection was to publish a book, so we brought in a professional photographer who did phenomenal work for us.” Since some pieces were quite large, the photographer had to pull far back to capture them, so it was easier to paint the walls black, rather than deal with a backdrop. Then, each piece was assembled, properly lit, photographed and then dismantled in order to set up the next one.

Henry emphasizes that with glass work, lighting is everything. Not only have the pieces come out of the fire, but, appropriate lighting of the finished works makes all the difference. With that in mind, the FIA is designing cases with lighting specifically for the pieces, which will be imbedded in the walls. In order to fully appreciate the accomplishments of these artists, it helps to understand the various processes involved in their work, Henry explains, “we have covered what was a courtyard on the west side of the building and we are turning it into a Makerspace and demonstration space with seating for around 100 people to watch the artists in action.”

The Makerspace will offer demonstrations every Saturday with artists explaining their techniques as they work. Included in this new Art School space will be a hot glass studio with a “cold room” where the pieces go for additional effects and techniques such as sandblasting and polishing that can happen only after the glass has cooled. Additionally, there will be a mobile foundry, a flameworking studio for making beads as well as small glass sculptures, and a jewelry studio. The FIA Art School will also offer classes for all skill levels in all of the mediums demonstrated in the new Makerspace.

These changes are exciting for the FIA and great for Downtown Flint. Keep an eye out for our next update on the FIA Expansion project and visit flintarts.org for more info on current exhibits and upcoming events.
Photography by Eric Dutro