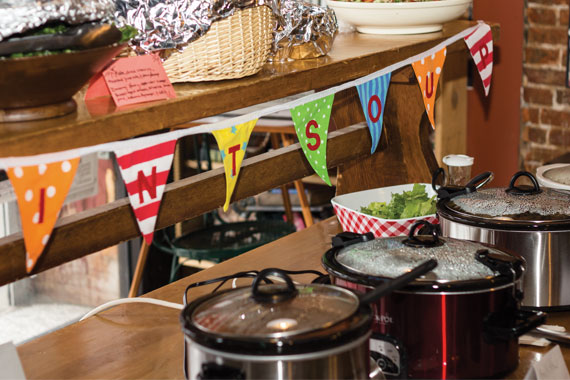 Adrian Montague of Davison has had an affinity for Flint for over 20 years. As a child, she dreamt of living and working in the city, so she attended the University of Michigan-Flint after high school, and has remained here, working tirelessly toward a revival of the city she loves.

Upon first meeting her, one might confuse the humility of the soft spoken 27-year-old with weakness or even apathy, but he would be wrong for doing so. Montague is an ardent supporter and an outspoken defender of Flint, both locally and abroad. She’s taken part in several organizations on college campuses, and her counsel has been sought by local government agencies.

Ever on the look-out for ways to help the common man in Flint, Montague attended a Detroit Soup event last year and was inspired to bring the model of soup dinner-funding to Flint. She pursued a mini-grant from the Greater Flint Arts Council along with 73 other applicants, and became one of 11 recipients. Flint Soup was birthed from this GFAC grant, and its first meeting was held in October of last year.

Flint Soup is a bi-monthly soup, salad and bread dinner that raises money for creative new projects in Flint. Each event requires proposals from people within the community who wish to start a new project or further support an existing venture. Past submissions have included house renovations, independently-funded art programs for local school children, and sports-oriented afterschool programs for Flint youth. Those who attend the dinner pay five dollars to enjoy a meal and listen to the proposals. Once the presenters have finished, a democratic process is employed as the attendees then vote on the proposal they like most. The project chosen by the majority is announced at the end of the dinner, and all the money generated from the five dollar admission fee goes to the chosen project. The last four Flint Soup events have generated over $1,200 in donations.

When asked what it was about Detroit Soup that inspired her to replicate the concept in Flint, Montague simply stated that she was touched by seeing the effects of grassroots funding. “It was Detroiters giving back to Detroiters, and I wanted to see that in Flint,” she said.

The fourth Flint Soup was held on Sunday, April 28 at the Lunch Studio in downtown Flint. The evening’s applicants included Russ Bedford of The Flint Seed Democracy, a local produce seed bank; DeQuan Allen, for a proposed Berston Basketball Tournament; Anthony Jones of Build-A-Bedroom, who specializes in making custom headboards and shelves for children with poor furniture; and Kenyetta Dotson of The Family Support Fund, which provides temporary housing and basic toiletries to local families in need. The Flint Seed Democracy was chosen by those in attendance to receive $250 for their project.

In her usual humble manner, Montague would only quote the lyrics of one of her favorite worship songs when asked about her vision for the future of Flint Soup. “I want to live to feed the hungry and stand beside the broken,” she said. “I want to see people moved into action; people who live to serve and not be served.” The people of Flint are blessed to have such a selfless person as Adrian Montague in their midst.