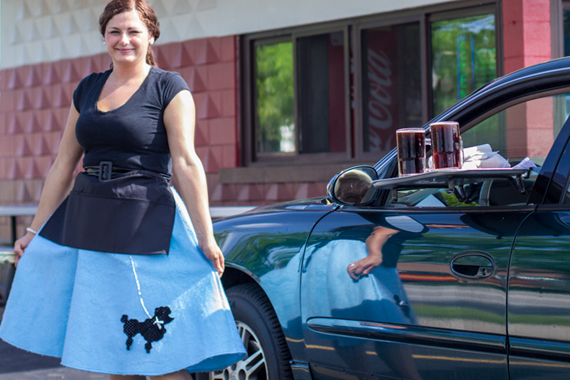 It was a hot, hazy and humid Tuesday afternoon – perfect weather for Coney Day at The Hot Dog Stand in Grand Blanc. Cars lined the parking lot and patrons stood eagerly in line at the window to order ice-cold, frosted mugs of thirst-quenching root beer and perfectly cooked hot dogs on freshly steamed buns. You won’t find anything fancy at this family-owned drive-in, but it will make you nostalgic for the days of poodle skirts and rock n’ roll music. What you will find is the best hot dog you ever tasted, served with a special red sauce made from a 70-year-old secret family recipe.

When Grand Blanc native Amber Zelley drove up to The Hot Dog Stand on this Coney Day, she and her three friends were greeted by a server who took their orders and served it on a tray right at the car door. Amber has come to The Hot Dog Stand since she was a little girl, although she refused to disclose just how often she indulges in the delicious dogs, which cost a mere $1.39 on Tuesdays. “Coney Day is such a good deal! Lunch is a steal at The Hot Dog Stand!” she exclaimed. “I love Koegel hot dogs and I love the red sauce. It’s like ketchup – but so much better!”

On this special Coney Day, My City Magazine was excited to meet three generations of the Moore family, who have kept the Grand Blanc landmark going for many years. Rhonda Moore is the third-generation owner. “I wanted to keep the legacy alive,” she said about her decision to take over the venture. Her father, James Moore, who is retired from the business, was in town to see his family, which includes Rhonda’s 8-year-old son, Chase, who has worked by his mother’s side since he was a toddler, using a stool to help him reach the cash register.

The Moore family legacy began in Grand Rapids back in 1932 when Rhonda’s grandfather, Ellsworth Moore, opened an A&W root beer stand with his brother-in-law, Vilas Martelle. Root beer was the only thing they sold. Back then, 100 pounds of sugar cost $4.39 and 1,000 pounds of ice cost $4.50. A haircut was a mere 35 cents and 20 cents would buy you a gallon of gas. Ellsworth and his wife, Aileen, moved to Flint in 1935 and opened Flint’s first A&W Hot Dog Stand in Downtown Flint on Beach Street across from the county jail. Ellsworth ran the business until 1963 when his son, James, took over. That year, Ellsworth and James built the hot dog stand in Grand Blanc, which opened as an A&W in 1964 and was run by Art Beckwith for many years. In 1980, A&W transitioned to a full menu, and since the hot dog stand was too small to offer the items required by the franchise, the business was accordingly renamed Hot Dog Heaven. “We couldn’t put it all in this tiny building,” James explained. After Art retired, the name changed again to its current title, The Hot Dog Stand, and Rhonda assumed the helm in 1998.

Okay, let’s talk about the original red sauce that many regular patrons claim to be the secret to the delicious hot dogs. “Dad didn’t like ketchup,” smiled James. So his mother, Aileen, created a special ketchup that complimented the Koegel hot dog, which is made of a meat blend perfect for steaming – just what Ellsworth wanted! According to James, the red sauce has less vinegar and no sugar, unlike regular ketchup. The sauce is served warm, and was so popular that customers would come to the stand to buy it by the cupful. In 2008, Rhonda started bottling the sauce, labeled “Original Red Sauce.” It can be purchased at The Hot Dog Stand and online, and is sold at Treasure Baskets in Grand Blanc and Main Street Treasures in Flushing.

Lynn Craighead is a Grand Blanc resident and longtime customer of The Hot Dog Stand. “We count the days until it opens,” she laughed. “We’re usually here on opening day and we’re very sad when they close in December.” Her daughter, Lily, 11, totally agrees. “I love the popcorn!” she smiled, but her mom is a big fan of the tangy Original Red Sauce.

Whatever their reason, hundreds of fans make The Hot Dog Stand a regular stop. Hey, it’s the dog days of summer! Take a drive out to Grand Blanc on Saginaw Street, order a hot dog with the original red sauce and a frosty mug of root beer. I guarantee it – you’ll be hooked!

Are you interested in purchasing photos from this story? Go HERE and select the “Hot Dog Stand” category.