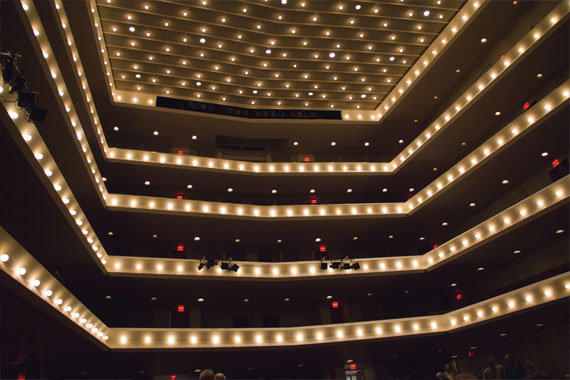 The Whiting’s upcoming season has something for everyone – music from the ‘60s, songs by legendary rock band Queen and a little bit of jazz in the Broadway hit, Chicago. Plan a girls’ night out to see the hilarious musical parody Menopause The Musical®. See Shakespeare at its finest in a production of Hamlet. Plan to laugh (and I mean a lot) with Jim Belushi & the Chicago Board of Comedy and when former “SNL” Stars John Lovitz, Tim Meadows and Jeff Richards take the stage. Be mesmerized during the performance of Westside Story and get ready to experience the explosive, sophisticated and provocative energy of the international percussion sensation, STOMP. These are just a few of the exciting acts on The Whiting’s 2013-14 season schedule.

Considered by many to be one of the jewels of Flint, The Whiting is a 2,043-seat auditorium located in the Flint Cultural Center. It was originally named the James H. Whiting Auditorium when it opened in 1967 and was renamed The Whiting in 2005. It provides facilities, programs and services to promote and support the presentation of the best regional, national and international performing artists. Throughout its season, The Whiting presents Broadway productions, music, comedy, theatre, dance and much more.

On May 6, the lights were dim in the auditorium as Richard Suhr, a frequent attendee of Whiting shows for more than 40 years, sat quietly with 350 other invited guests, anticipating a preview of the upcoming season. Richard comes to the annual preview to decide which performances he will attend in the upcoming year. “I look forward to it,” he said, “because I grew up in Flint. All old-time Flint residents grew up enjoying it.” Richard even brought his first date to The Whiting back in the day. “It’s top notch entertainment: a little something for everybody,” he said. One of his favorite performances of all time was The Wizard of Oz, which was performed at The Whiting a few years ago. “The special effects were awesome!” he recalls.

Whiting Marketing and Media Relations Manager Wendi Fournier, Executive Director Jarret Haynes, Education and Outreach Coordinator Christi Lackey and Jay Patrick, WCRZ CARS 108 radio personality, were speakers at the premiere. “Theater offers us an escape from our daily lives,” Wendi said. “It helps us discover ourselves. It makes us laugh and it makes us cry.” Jarrett expressed excitement about sharing the upcoming season. “We constantly search for the right mix,” he said. “We invite you to explore the world of the arts and join us for this season’s performances as often as you can.”

The premiere, presented by ABC 12 News anchors Angie Hendershott and Matt Franklin, was followed by a Season Premiere Party. The room was transformed by a 60s theme, including beaded entranceways and lava lamps. Participants stood eagerly in line to buy tickets for their favorite shows. “This award-winning season is now on sale,” said Wendi.