Chrysa Curran-Cronley has been making dresses since she was nine years old. At first, they were hand-stitched ensembles for her Barbie doll, then her own clothing. For the past four years, she has made one-of-a-kind creations out of her Downtown Flint studio. Now, she is a My City Magazine City’s Choice Award-winner for Favorite Dressmaker – an honor she was both surprised and grateful to receive.

She remembers the first outfit she sewed by herself on her mother’s machine; a vest and skirt made of blue, denim-washed fabric, using one of her sister’s Simplicity patterns. “It was awesome,” she smiles. “I didn’t realize until much later that everything was crooked – I just loved it.” Her mother encouraged her to follow the pictures on the patterns and learn how to use the sewing machine on her own. “Nothing stopped me,” she says. “Even when I would get mad, my mom would say, ‘just take a break and it will be better’ and I did that forever. I remember wanting to throw the machine out the window,” but Chrysa’s life motto has always been, “where there’s a will, there’s a way.” 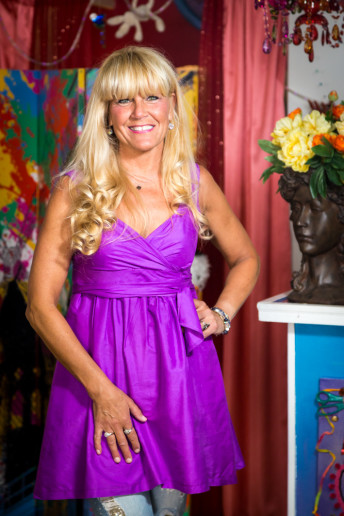 Born and raised in Flint, Chrysa grew up on the East Side. Her father worked for the City of Flint and she had ten brothers and sisters, all in Catholic school. This led to a lot of hand-me-downs sewn by her mother, “and boring school uniforms,” she remembers. But that changed when Chrysa realized that she could create whatever clothing she imagined. An artist at a young age, she sketched bright, colorful outfits. She took art classes at the FIA through her youth and biked there on Saturdays, just to wander and look at all the art, “I was in heaven,” she smiles. When, at 16, she went to her first concert – The Romantics – at the Capitol Theatre Downtown, she made an outfit from her mother’s sheets because she couldn’t afford to buy fabric. She recalls, “it was a cool top and blousy pants that I tie-dyed and added crystals to” – crystals that she pulled off her sister’s old dance costumes.

At 18, she began the Fine Arts Associates program at the FIA through Mott Community College. Through her training, she created artwork that combined her love of fine arts and fashion by incorporating fabric into all her pieces. Around the same time, she had an experience that would change the focus of her art: a friend asked her to make a party dress. It was the first dress she made for someone else. “When she put the dress on and twirled around in front of the mirror, she said, ‘it’s better than I ever expected!’” Chrysa recounts. “I thought, ‘oh, I want to do this forever.’” From that point on, Chrysa not only made all her own clothing, but also began steadily making custom pieces for others.

Dressmaking remained a part-time job while she had her own three children. But, since her divorce about three years ago, Chrysa found it necessary to focus on her career creating artistic formalwear. “Projects always came to me steadily,” she shares. “If people needed me, they would call me.” With the divorce came the pressure of having to make a living at it. Through this time of uncertainty, Chrysa found support from friends and the community, especially those she calls her “angels.” 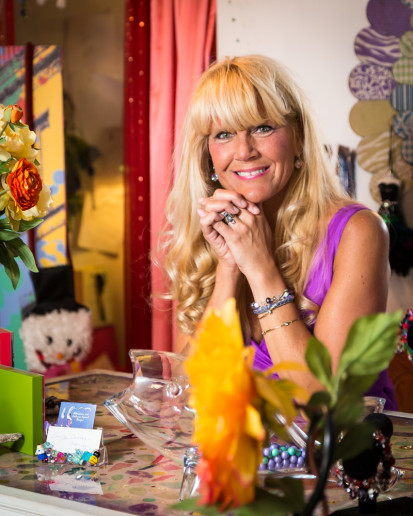 The first of those angels were Drs. Bobby Mukkamala and Nita Kulkarni. The couple’s children attend the same school as Chrysa’s kids, and the women became friends. Chrysa participated in the First Frost Arts & Fine Crafts Fair at the FIA, offering silk scarves, hats, coats and anything else she calls, “winter-licious.” This was the first Downtown event where she exhibited her work, and it paid off. “I sold everything! I did phenomenal and I was so happy,” she exclaims. That day only got better when Dr. Mukkamala approached her as she packed up after the fair, and offered to help her set up a studio Downtown. Chrysa answered, “Am I dreaming right now?” and started crying. “It was the answer to my prayers,” she recalls. “I tried to come Downtown so many times, but the rent was so high, I just couldn’t do it.”

Being Downtown has doubled her business. “The best thing about it is the hustle and bustle,” she says, “especially through the summer with events like Back to the Bricks. It feels so much better than working in my basement, hidden away.”

Another angel who has encouraged Chrysa in her move Downtown is Andrew Watchorn, the landlord at her studio. “I think of him as another C.S. Mott, because he so wants to see Flint come back to be an even better city, and he supports the arts,” she shares. “When business was slow or I was feeling really stressed and discouraged, Andy said to me, ‘Flint needs you,’ and those three words helped turn me around.”

Chrysa makes everything from wedding gowns to men’s shirts and formalwear, does alterations, creates costumes and party dresses. Her designs have been worn to major Downtown events including The pARTy: An ARTrageous Affair at the FIA, and the opening of the Titanic Exhibit at Sloan Museum. Her work is influenced by that of her favorite designer – Valentino – feminine, edgy pieces, and 80s fashions with a modern take. She is also influenced heavily by music and eras. She explains, “jazz makes me think of silky, sexy pieces, while classical music makes me think of a fitted, brocade jacket.” 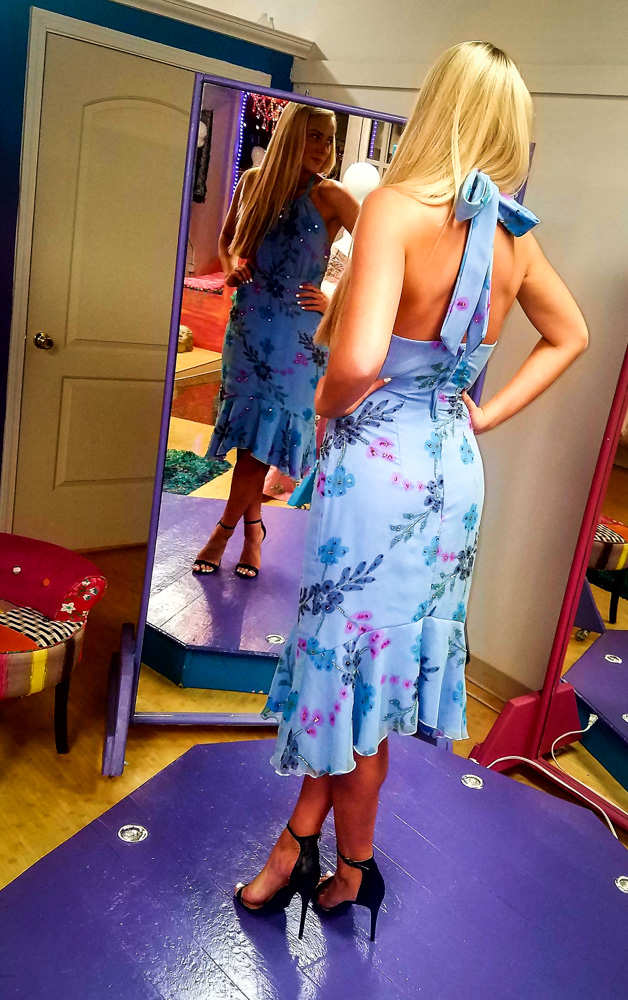 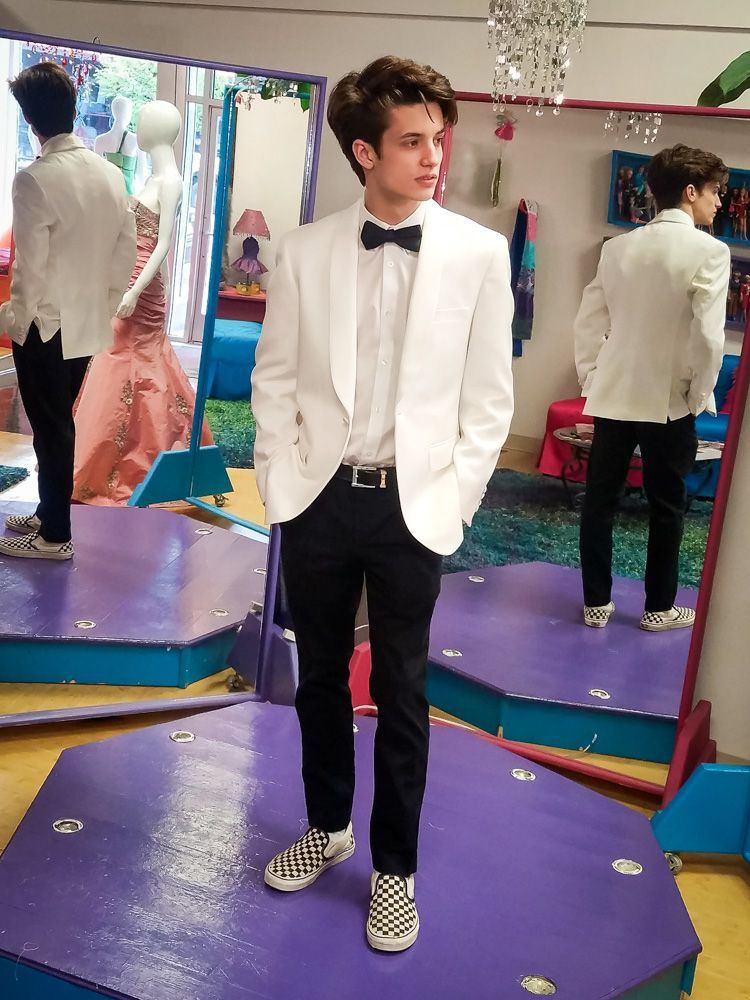 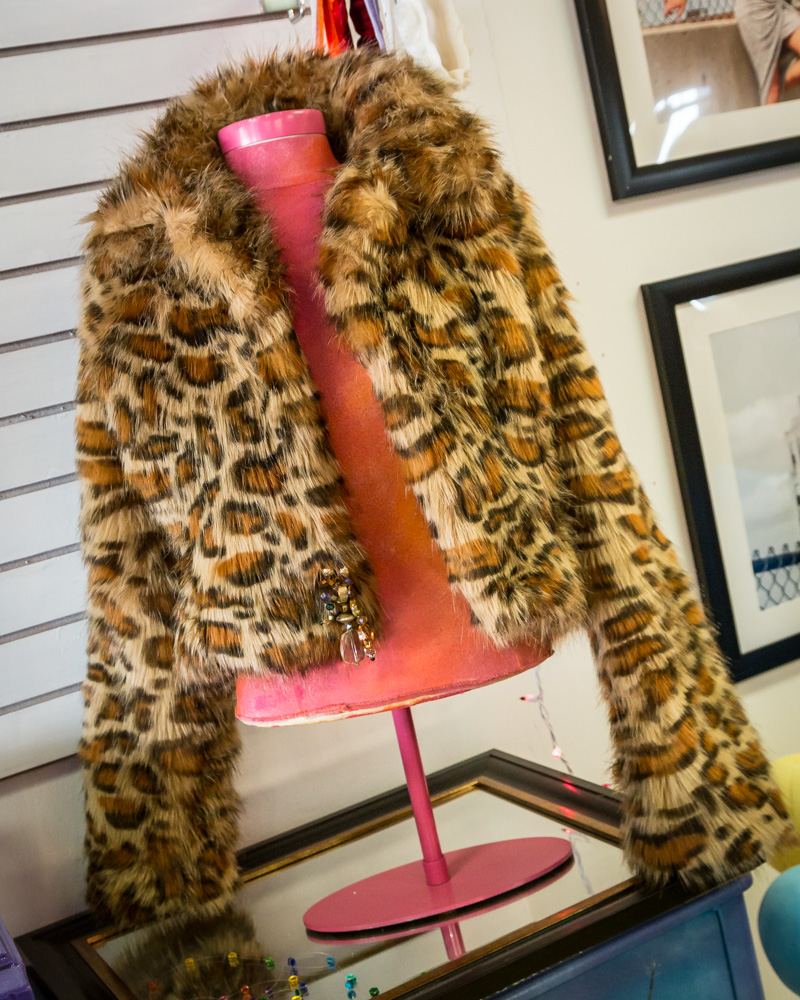 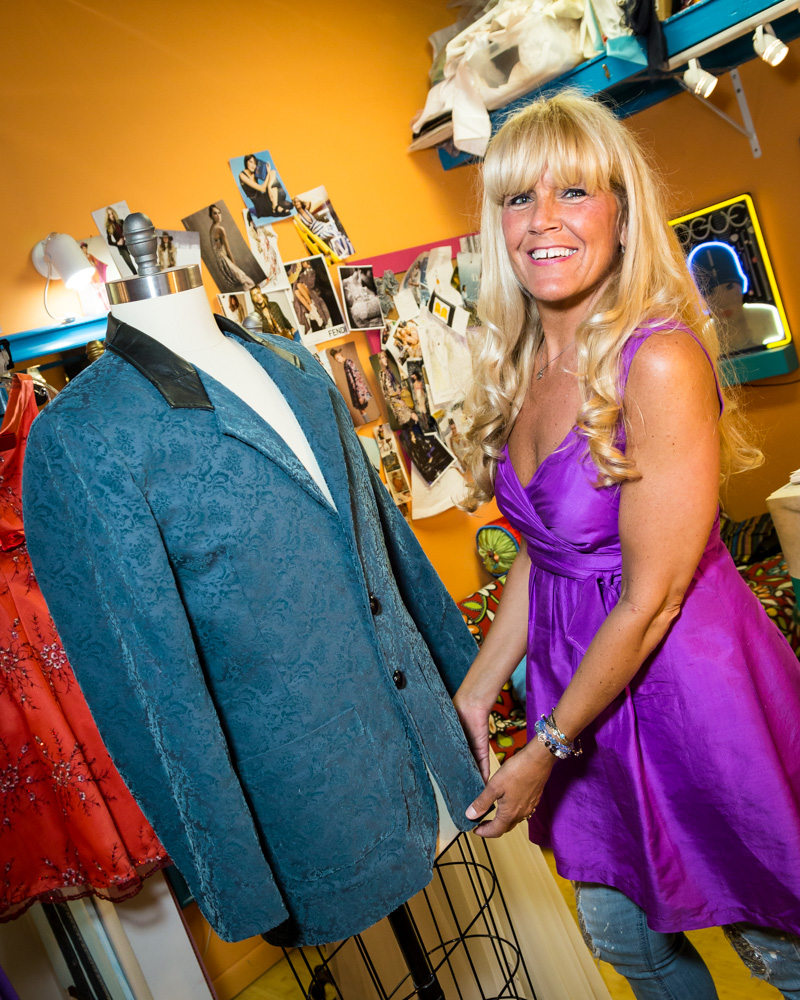 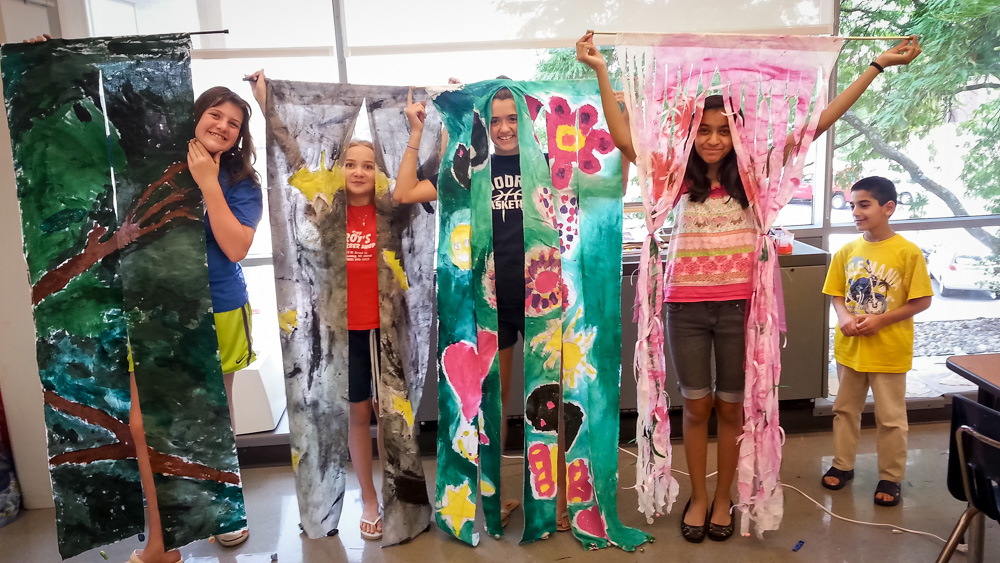 Wedding gowns are her favorite garments to make, “especially when a bride lets me have free reign,” she says. “When I measure her and we talk during the initial consultation, I take the time to learn what she likes in order to create a design that will fit her personality.” Beginning with a sketch, each gown can take 24-50 hours of work, depending on the amount of detail and hand-stitching involved. 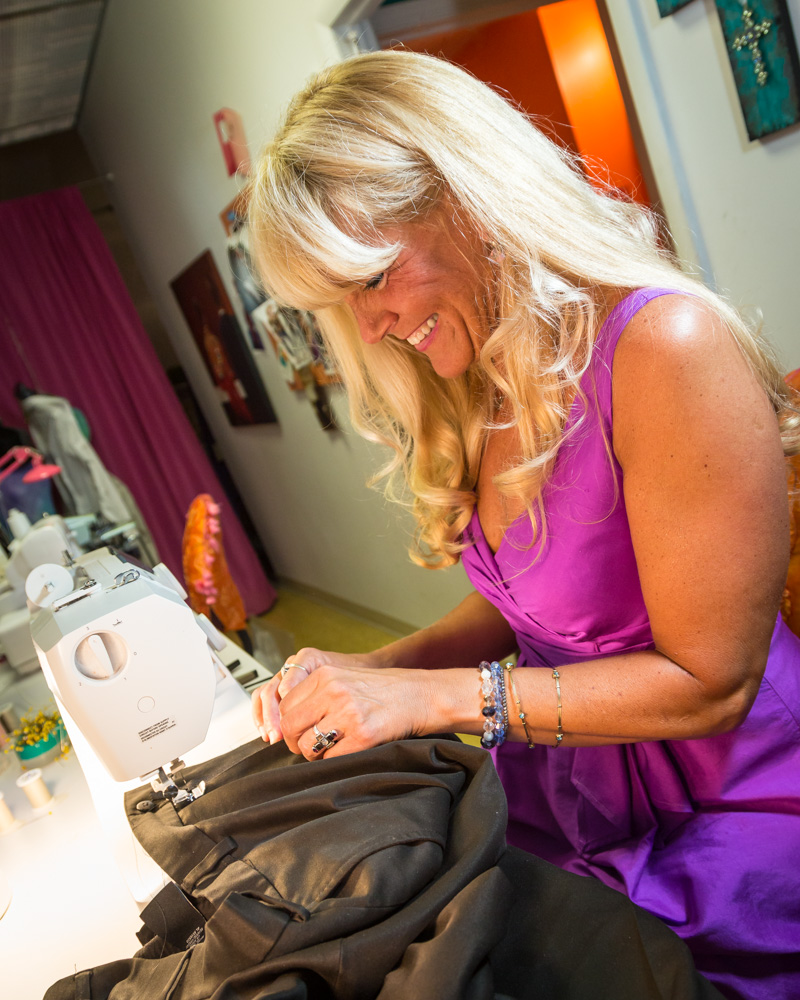 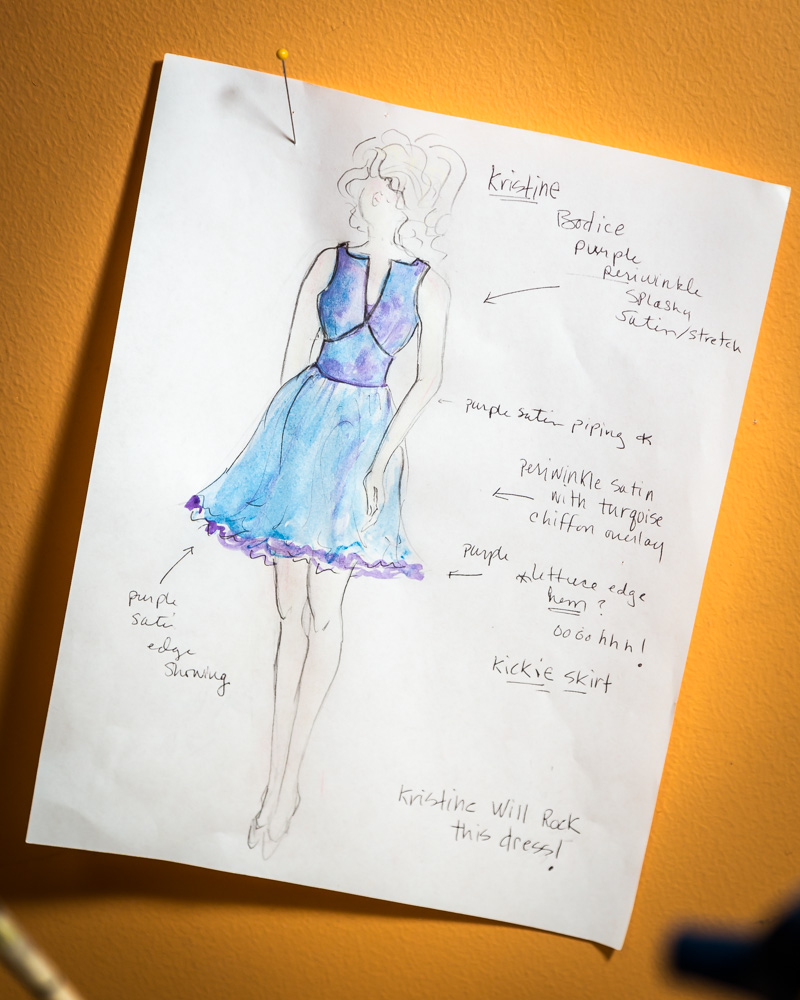 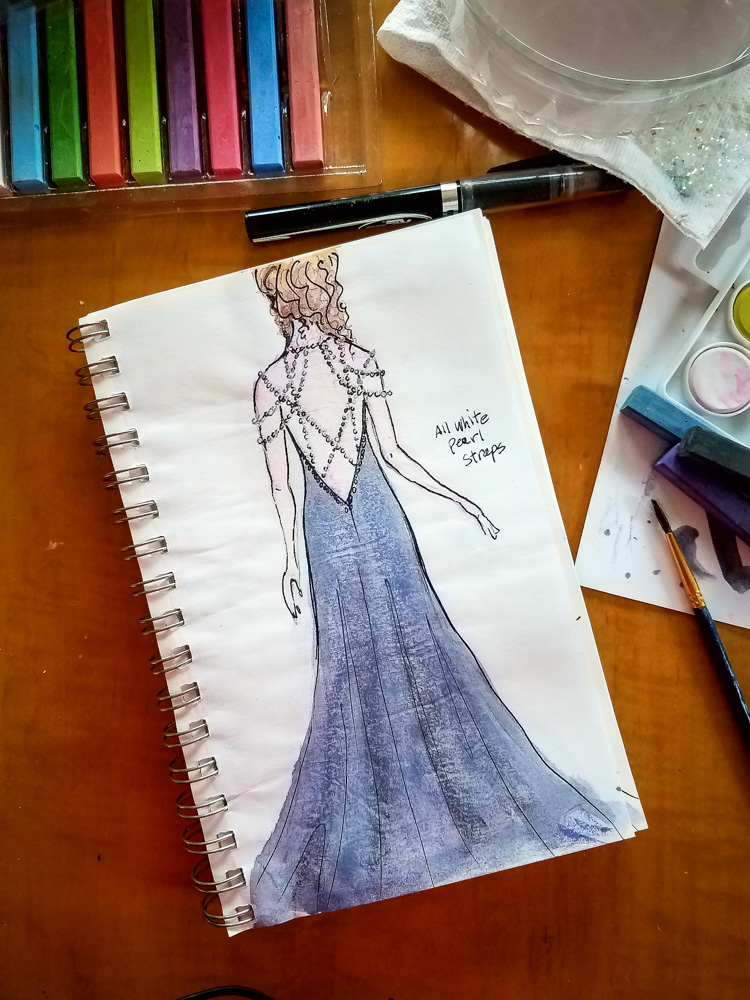 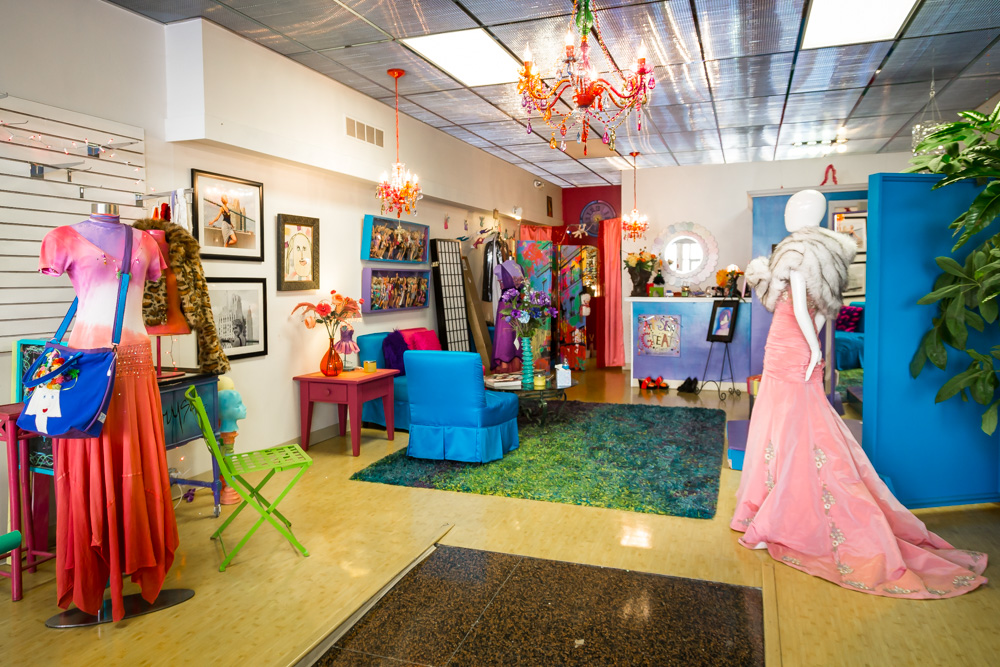 Besides making custom clothing, Chrysa has also been teaching sewing and art to Flint youth. She taught sewing classes at St. John Vianney Catholic School when her children were younger. She also began the “Art Sew Great” program at the FIA, then moved it into her studio. The program is for all ages, boys and girls. She helps them create art projects that teach both art techniques and sewing skills. “Every project involves sewing,” she explains. Another “angel” who was involved in the Art Sew Great program is Kimberly Landaal, of Landaal Packaging, who provided six sewing machines.

Chrysa plans to extend sewing education to adults, as well. Last year, she piloted a program called “Sip & Sew.” This program is intended to be a fun way to socialize and complete a sewing project while enjoying a glass of wine. The pilot was a success and she plans to have more classes in the future.

A vision Chrysa cannot stop imagining involves the future re-opening of Downtown’s Capitol Theatre. “I would love it if they had a huge event to celebrate, with men and women getting out of classic cars wearing my designs – like a classic Hollywood scene,” she smiles. She points out, “The Capitol has an old-fashioned look and an event like that would be a work of art, showcasing classic cars and a fashion show in the lobby.”

Chrysa is available by appointment only. Call or text 810.516.5299 or email chrysasappareldesigns@gmail.com.