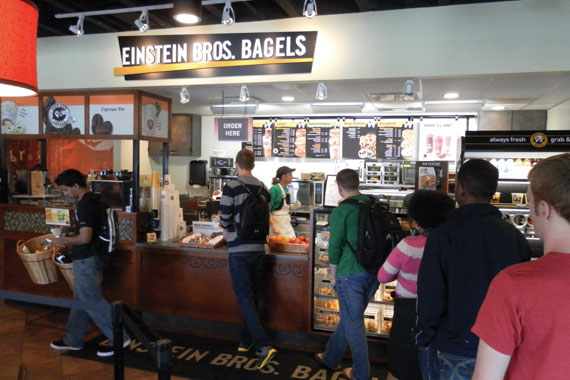 Be sure to stop by Flint’s new Einstein Bros. Bagels on University Ave. to enjoy signature bagels from the nation’s largest retail bagel company!

The Einstein Bros. Bagels company originated in Colorado, and now has over 700 locations nationwide, several dozen of which are in the Metro Detroit area alone. On March 1, the first Flint store opened on Kettering University’s campus, bringing the beloved bagels to Kettering students and the general public. Since the store is on Kettering’s campus, it serves students during the same hours in which other food options are available, from 6:00 am-4p.m. It also accepts student meal plans and Kettering Cash as valid payment methods, in addition to cash and credit.

Next door to Einstein Bros. Bagels is a new Flint Police Service Center, which provides an additional location for patrolling police, offering added public safety service to the community.

Another great food option and enhanced public safety—who could ask for anything more?