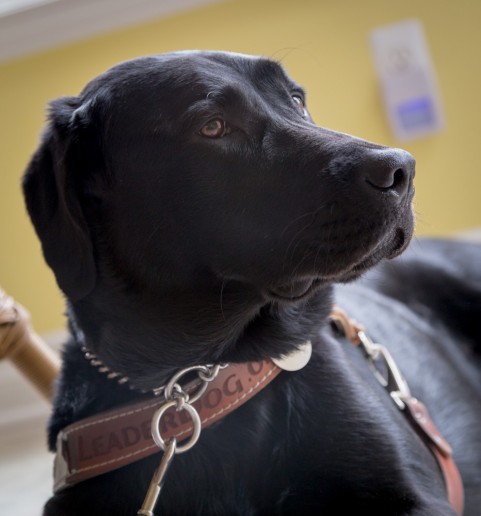 September is National Service Dog Month, dedicated to raising awareness and showing appreciation for the extraordinary work that service animals do.

Of any type of service dog, leader dogs for the blind require the most training. Just ask Melanie and Warren Hein of Fenton. They are Puppy Raisers for the Leader Dog School for the Blind in Rochester Hills. Living with a Puppy Raiser is just the first step in the process of training a leader dog. The goal of a Puppy Raiser is to raise a future leader dog that will have the ability to show self-control in a wide variety of settings. “Our job is to teach socialization skills and basic obedience,” Melanie explains.

Both Melanie and Warren are members of the Fenton Lions Club, which spurred their interest in leader dog training. Founded in 1917, the missions of Lions Club International include preventing blindness, restoring eyesight and improving eye health and eye care. After an application process, the Heins were approved by the Leader Dog School as Puppy Raisers. That is when Maggie, a rambunctious, nine-month-old Labrador Retriever, came to live with them at eight weeks old and weighing just 12 pounds. 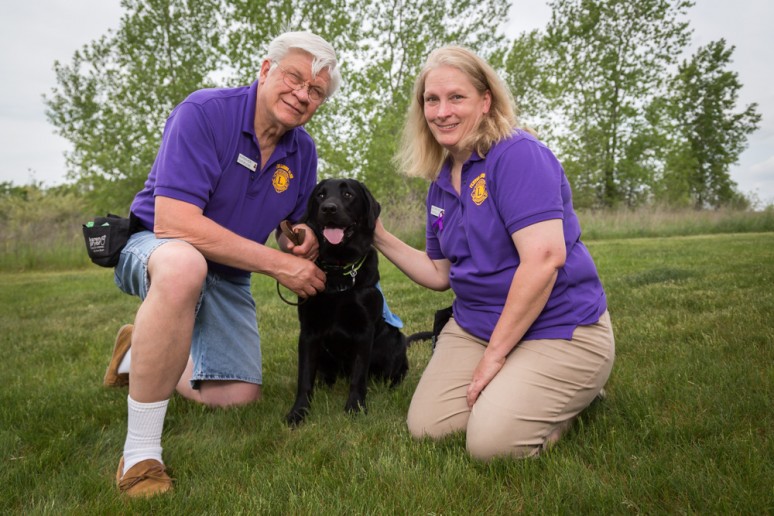 The Heins spend a lot of time taking Maggie to restaurants, doctors’ offices, stores – even up and down escalators to help hone the pup’s socialization skills. “She’s even been to a hockey game,” Warren adds with a laugh. Maggie wears a bright red vest that reads, “Future Leader Dog.” She has been to several church services with the couple and has been on a train at Crossroads Village to help her adapt to different surroundings. She eats a special diet of two cups of Purina® Pro Plan® each day. And, Maggie gets lots of treats, which are used for training purposes. “She’s very food-motivated,” Melanie shares.

Maggie’s training has included learning to walk on the left side of the body, to not be distracted, to “stay,” and not take off, which at times can be very difficult. “She’s a typical puppy. She’s excited about life and not afraid of anything!” Melanie exclaims. Maggie is, however, cautious of new things. When she is ten months old, her progress will be evaluated by the Leader Dog School. At 12 months, Maggie will return to the school for a program called, “In For Training,” where she will learn the Guide Dog Commands. According to Warren, there is a 50 percent chance that a future leader dog won’t meet the qualifications. It they fail, the first option is a “career change” to be a therapy or comfort dog. If that doesn’t work out, the Puppy Raisers are given an option to re-adopt the dog.

“It’s a full-time job, but it’s worth it to know we are helping to change someone else’s life.”
WARREN HEIN, PUPPY RAISER

As one would expect, the biggest drawback to puppy-raising is becoming attached to the four-legged companion, and Maggie has become very attached to the Heins. But the couple would not trade the experience for anything. They are happy with the way Maggie picks up on everything so quickly. “It’s been a challenge, but it’s been fun,” Melanie admits. “We knew she was something special when we got her.” Warren agrees: “She’s been a joy and definitely made a significant difference in our lives. You have to think about the dog, first, and you have to be very committed. It’s a full-time job, but it’s worth it to know we’re helping change someone else’s life.”

Having a leader dog has greatly impacted the life of Kim Verhelle, who has been legally blind since birth. She is also Fenton Lions Club member and enjoys helping other visually impaired people. According to Kim, many leader dogs are raised in prisons through the Inmate Puppy Program. “It’s an amazing program,” she says. “It turned out to be a great thing for the inmates. It gives them a goal.” 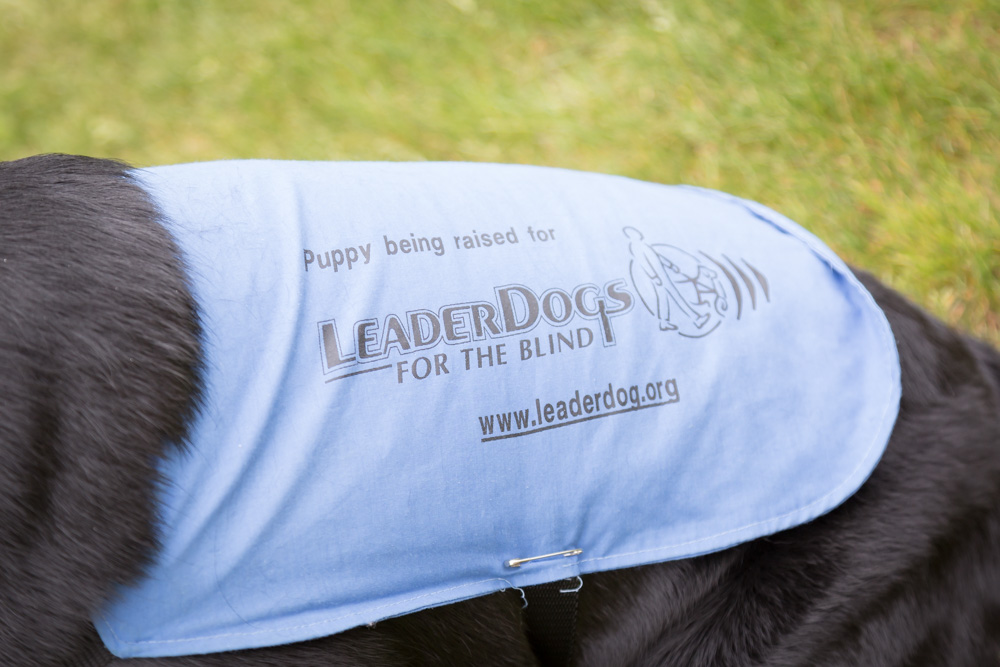 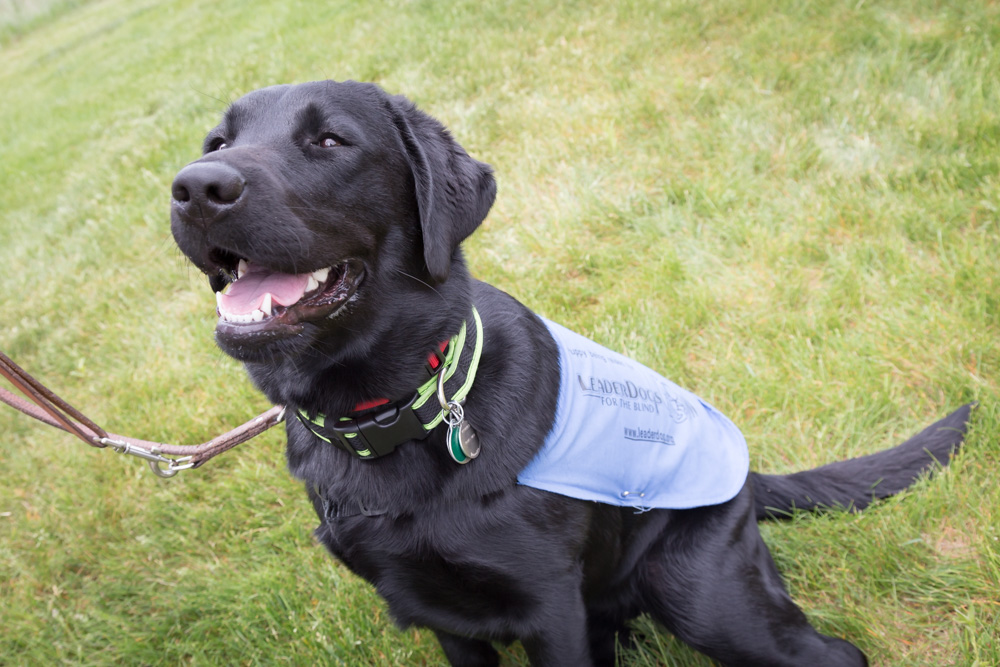 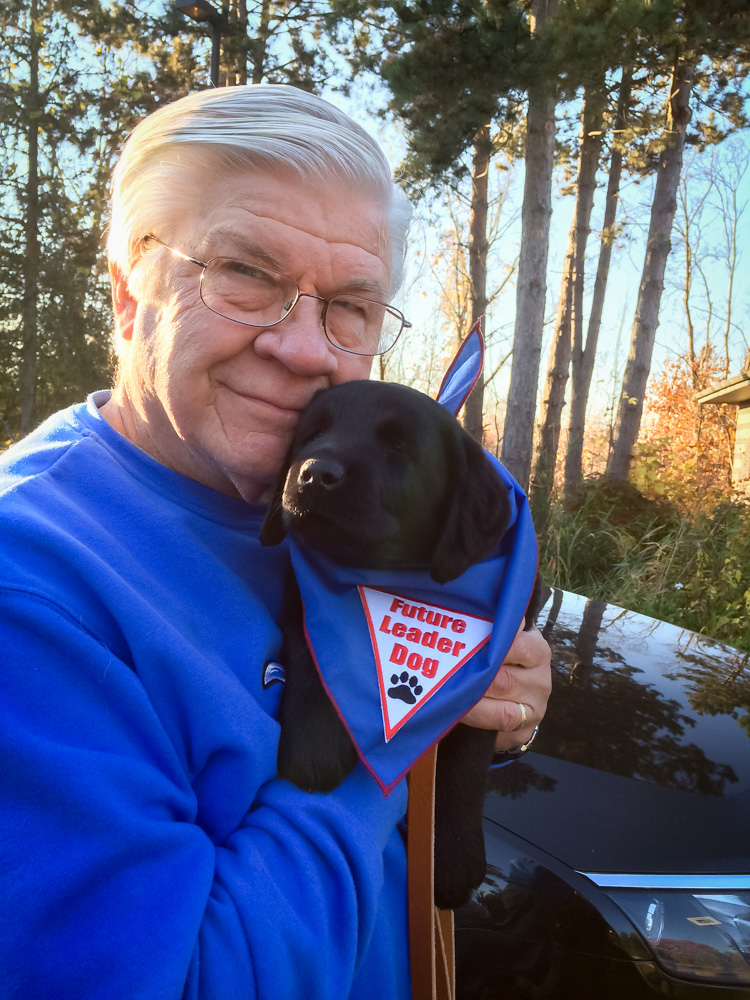 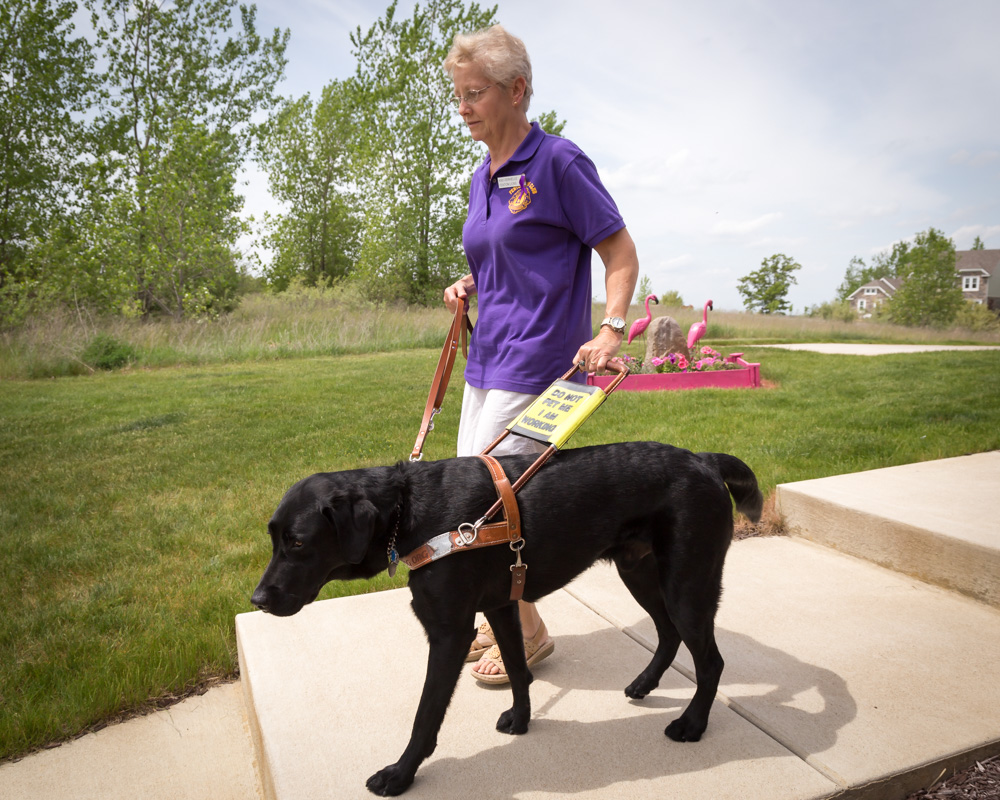 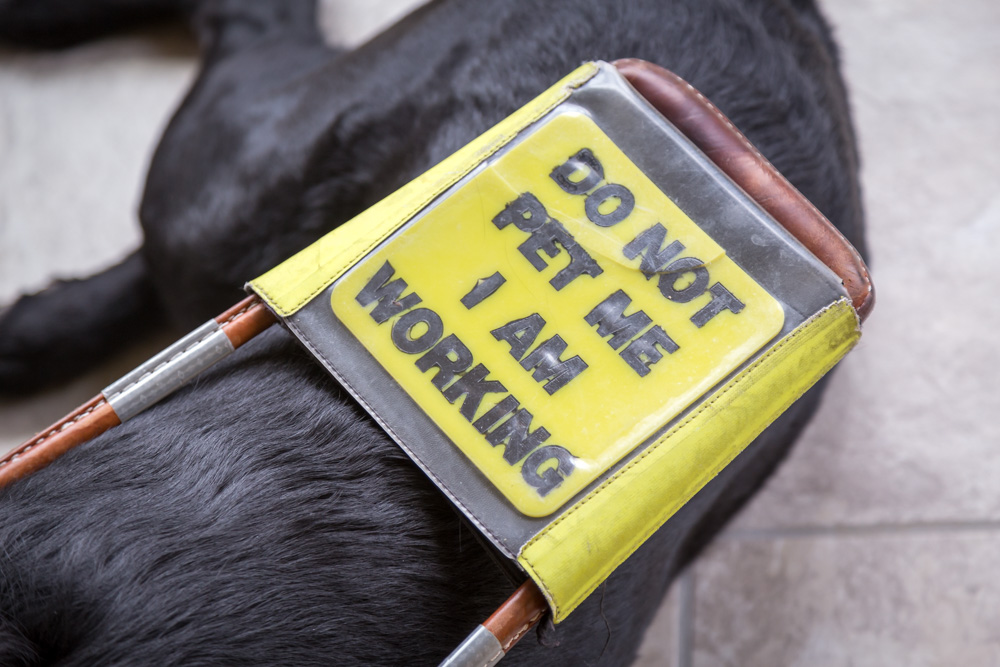 Kim grew up in Flint and learned to read Braille at Durant-Tuuri-Mott Elementary School. “Fenway” is her second leader dog and has been with her for three years. She had to undergo a rigorous application process in order to qualify for a dog. “You need to be able to navigate without a dog before you can have one,” Kim explains. “And you have to have good mobility and orientation skills.” Prior to having Fenway, Kim used a white cane to help guide her.

After gaining approval for a leader dog, Kim had to attend a 26-day training program at the Leader Dog School for the Blind in order to train with Fenway. The school matches a dog with an individual and then, they are introduced. “Some warm up quickly and some don’t,” Kim says. “Fenway didn’t want anything to do with me at first, but we finally connected.” After learning the guide dog commands and practicing them with Fenway, Kim was able to bring him home. “I can travel so much faster with a dog than with a cane!” she exclaims.

Having a guide dog also helps a visually impaired individual with navigation. On the street, Fenway helps Kim find curbs, sidewalks and doors, and also helps her cross the street. He helps her find the nearest chair at a doctor’s office, the counter at a retail store, stairs and elevators. Fenway is taught something called “intelligent disobedience,” which means he can make a decision for her if the command she gives him would put her in danger. “I feel more confident and independent with Fenway,” says Kim, “He is my companion.”

Service dogs can be trained to help perform many tasks – guiding the blind, alerting individuals who are deaf, pulling wheelchairs, and even protecting a person who is having a seizure. Dogs can be trained to help people with diabetes by using their naturally superior sense of smell to identify and react to changes in a person’s blood chemistry that occurs during rapid changes in blood sugar levels.

A Diabetic Response Dog can detect drops and increases in insulin levels in real time. Some dogs have more than 200 million sensors that can detect individual scents. When a diabetic experiences high or low insulin levels, the body releases chemicals that change the scent of secretions and liquids produced, which the dog can smell through the person’s breath and skin.

To sign up for the free support group meeting, call the Genesys Diabetes and Nutrition Learning Center at 810.606.7720. The group meets every other month and is open to diabetes patients and their family members. The meeting will take place at Genesys Athletic Club in Studio 3. The club is located on the campus of Genesys Regional Medical Center in Grand Blanc Township.