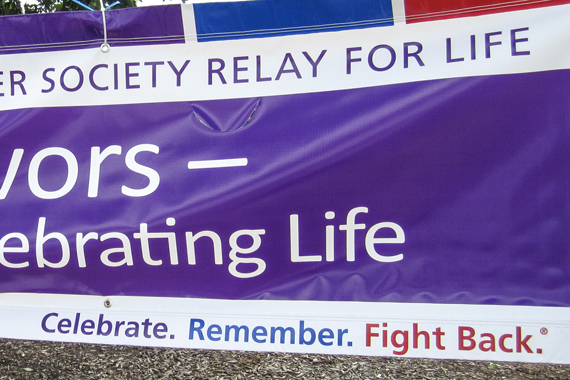 With a very heavy heart, I attended the Fenton Relay For Life at Fenton High School on Saturday, June 8. My good friend Darlene Barnett, a longtime Fenton resident, had recently lost a long and courageous battle with cancer. I had attended her memorial just a few days earlier and the pain of losing my friend, who was like a sister, was still raw and the tears fresh. Yet, there was no better way to honor her memory than with those who participate in Relay, because each of their lives has been touched by cancer in some way.

The Relay for Life motto is “Celebrate. Remember. Fight Back.” Each year through the movement, more than four million people in over 20 countries raise much-needed funds to support cancer patients and fund research. Communities unite to honor survivors, remember loved ones lost, and support those who are fighting a disease that has already taken too much from too many. Team members, friends and relatives of those affected walk during the events, which take place over a 24-hour period – because “cancer never sleeps.”

This was a poignant year for Judy Green, my friend and chairperson of Fenton Relay For Life. She is Darlene’s cousin and she, like me, was grieving her passing. “It’s a personal thing for me,” said Judy as to why she so freely gives her time to support Relay For Life. Judy has lost other family members to cancer, including her nephew Matthew Green, of Linden, who lost his battle with Ewing’s Sarcoma when he was just 12 years old. Darlene had been a supporter of Fenton Relay For Life, having started the family’s first Relay team six years ago with Judy and other relatives, called Cousins for a Cure. In following years, the cousins changed the name of their team to “No S’more Cancer,” raising money by selling S’mores at the event.

This year’s Fenton Relay for Life was truly a celebration of hope and remembrance, and Judy said many people contributed to its success. “The people who came had a good time,” she smiled. “The whole committee worked so hard and should be proud.” Twenty-eight team events have raised approximately $50,000 to date, and fundraising efforts continue through the end of August.

Grand Blanc held its fourteenth annual Relay For Life in June, as well. According to the American Cancer Society website, $112,000 has been raised to date through the 30 participating teams. On June 1, Davison also painted the town purple—Relay’s signature color—raising $84,000.

All Relay events include a Survivor Dinner and a Luminaria Ceremony. After lining the walking track with Luminaria, the walkers continue in silence and darkness, guided only by the light of the candles, honoring someone in their lives who has been touched by cancer. Many are moved to tears as a large video screen lists the names of those who survived the disease and memorializes those who didn’t. Another touching ceremony is the balloon release, also honoring survivors. “They are our heroes,” said Judy. “They give us a reason to continue the fight.”