The singers in the Carolyn Mawby Chorale have the voices of angels! The chorale music group is currently busy preparing and practicing for its much-anticipated performance, the Carolyn Mawby Christmas Concert, which will be held at 4pm on December 4 at First Presbyterian Church in Downtown Flint. The group shared its passion for chorale music and its special harmony of voices for many years under the direction of Carolyn Mawby, who left this earth in April 2014 after a long battle with cancer.

Carolyn left behind a legacy of excellence in music that has inspired many, many people. Her memory lives on through the group, now directed by Mary Nieuwenhuis, Artistic Director and Conductor; and Dr. Matthew Thompson, Accompanist and Associate Conductor. In her wisdom, Carolyn, who had worked well with Mary and Matthew, chose them to carry on in her absence; and it was very fitting, according to Roberta Goergen, President of the Chorale. “They were like the Three Musketeers,” she says, adding that they collaborated well together and shared the same desire for excellence. 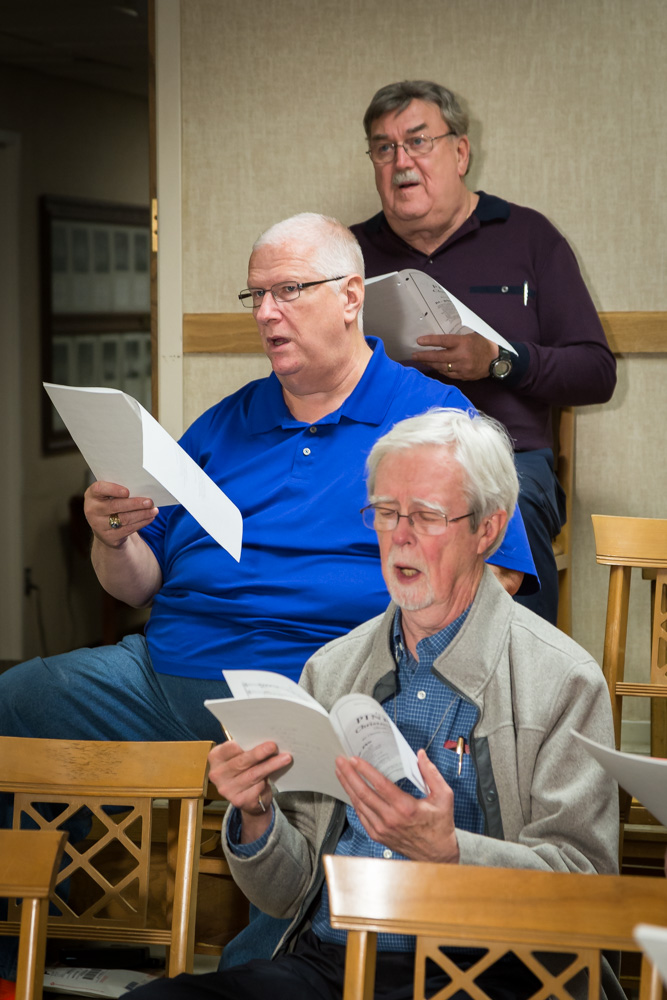 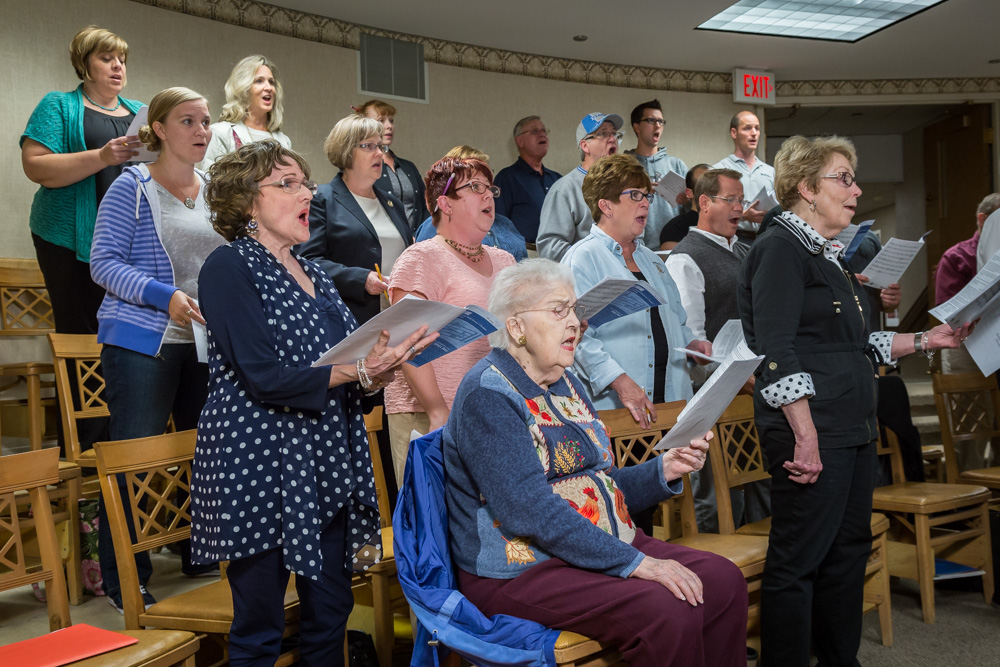 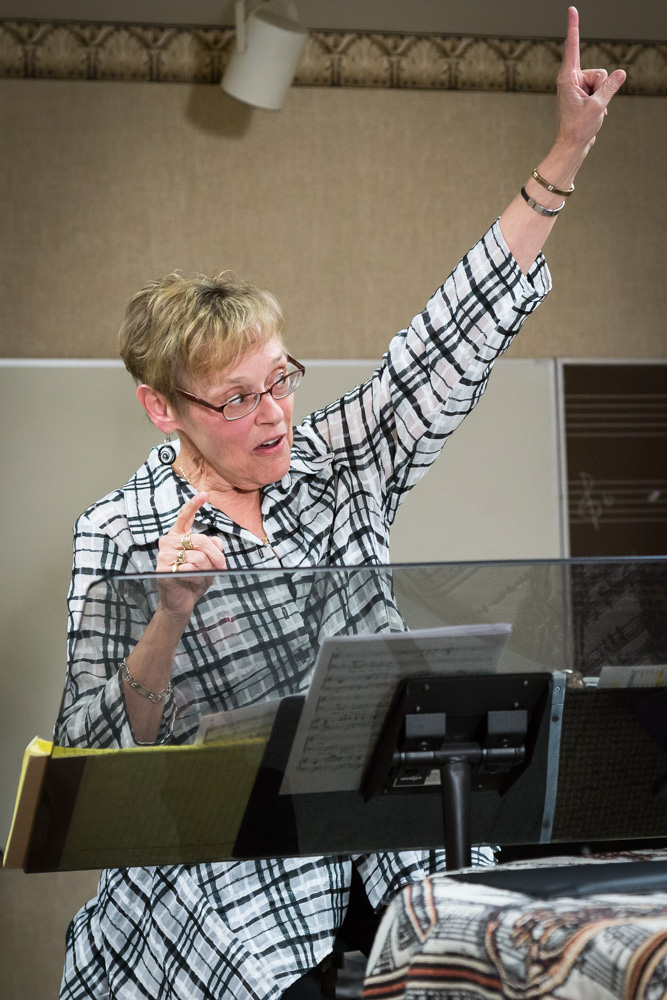 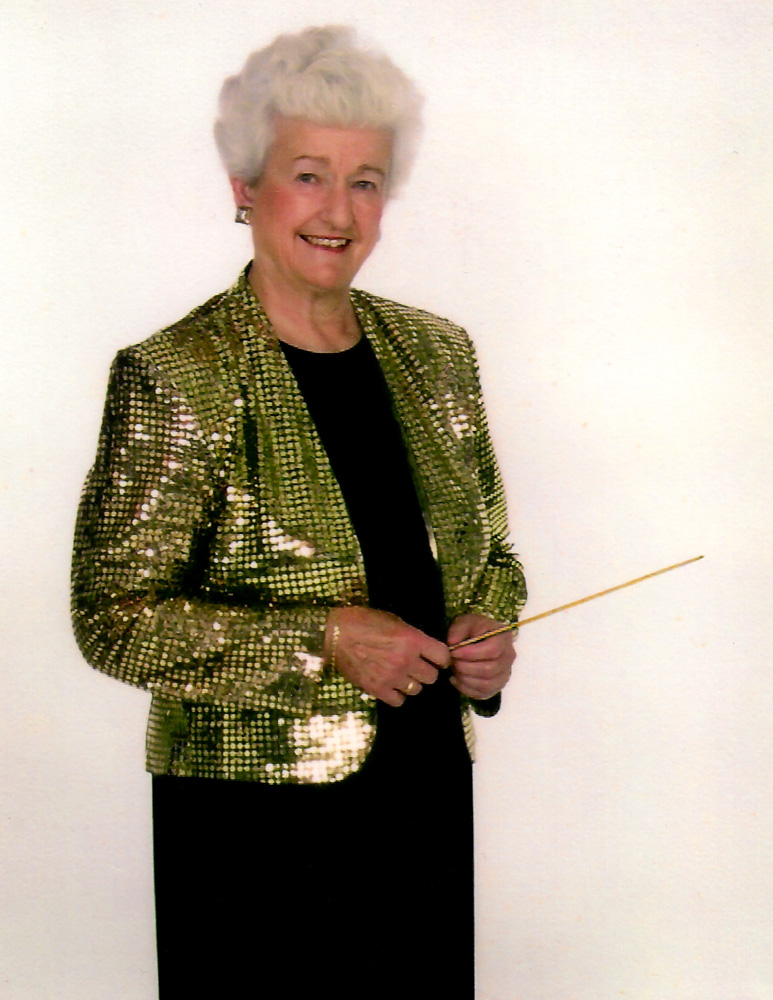 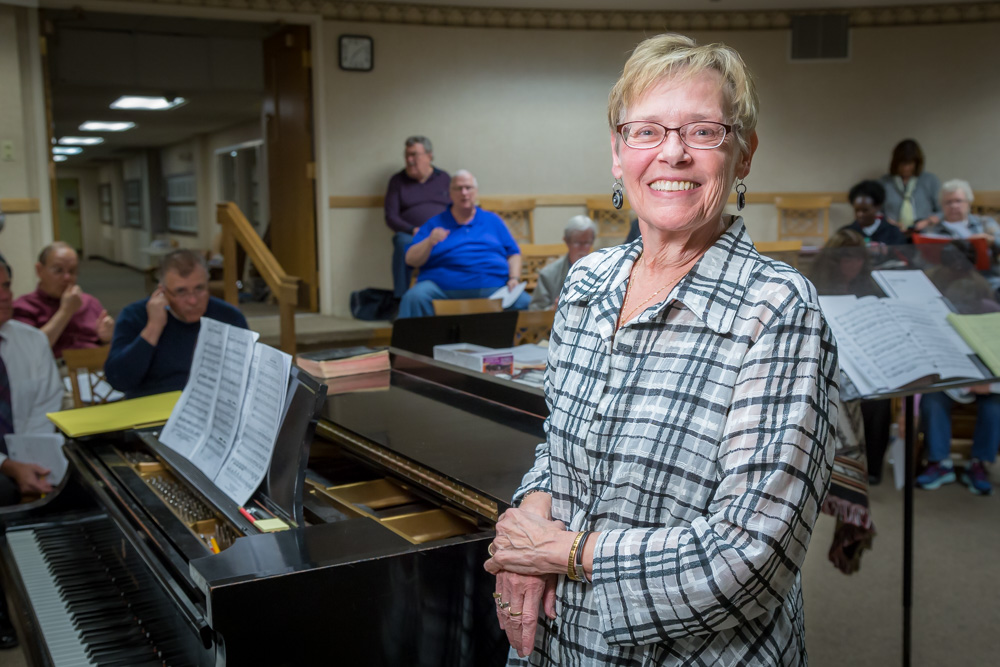 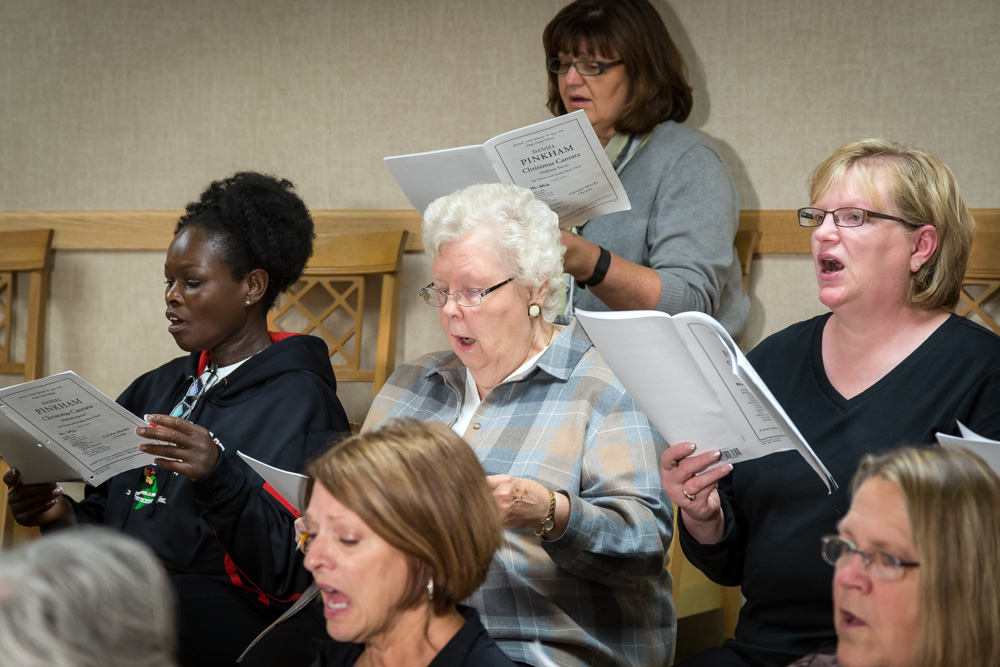 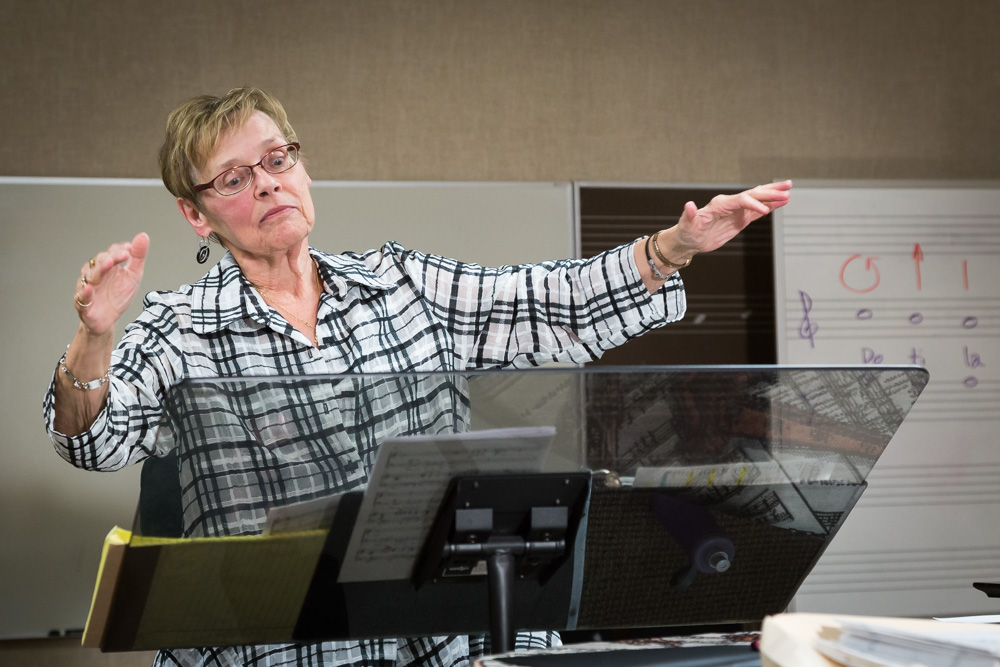 The music sung by the Chorale ranges from Renaissance through 21st Century pop. The group consists of many professional musicians, some of whom have sung with the Chorale since it began. All were in one way or another inspired to sing by their beloved leader. “Carolyn was the essence of what a good chorale director should be,” says singer and her good friend, Judy Noye. “She demanded excellence, but always in a positive way.”

Carolyn always loved music and began playing the trumpet at an early age, becoming an accomplished trumpet player while in high school. After graduating from Michigan State University, she went on to earn a master’s degree in music history at Boston University. When a job opened up at Grand Blanc High School, Carolyn moved to the area and became the choir director. After ten years, she was invited by Dr. Ray Roth to help establish a music program at the University of Michigan-Flint. “She was the reason I went to UM-Flint,” says Paul Ballard, who, along with Kathy Howe, is an original group member who sang under Carolyn’s direction during high school.

After many of Carolyn’s students graduated from UM-Flint, they wanted to continue singing with her. “We’re not done singing with you, yet!” they told her. In 1987, Kari Shaw and many other students began discussing the formation of an alumni choir, and from that, the University of Michigan-Flint Alumni Choir was born, which Carolyn directed. “She was like a magnet,” Mary says with a smile. “She had a reputation for having great expectations, and the ability to get people together to sing chorale works. She reached out to thousands of singers.”

The Michigan Flint Alumni Choir was re-named the Carolyn Mawby Chorale after Carolyn retired from UM-Flint. In 1994, the chorale opened its membership to non-alumni and now, there are over 50 singers. Members must audition to sing with the group. 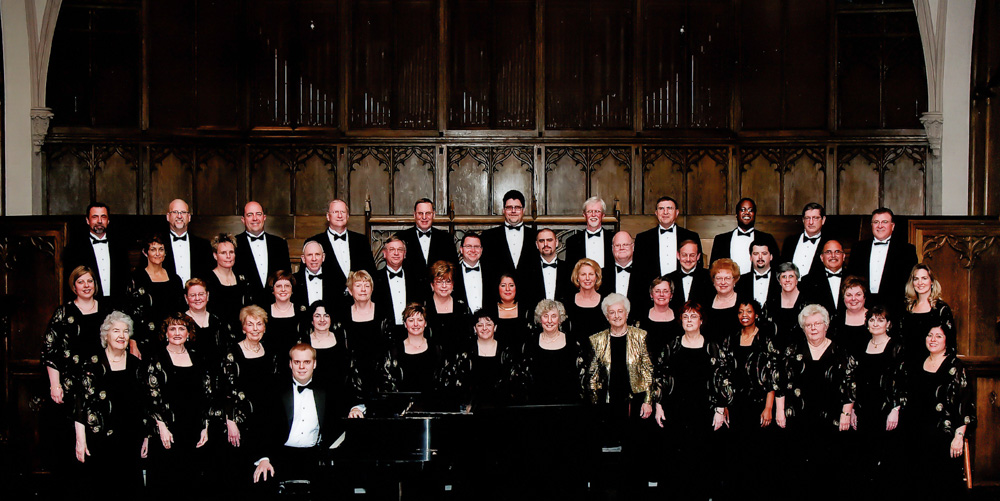 The excellence that was demanded by the former conductor is remembered by many. “Carolyn was such a special person,” Matthew shares. “She had an uncanny ability to make you want to do and be your best.” According to the assistant conductor, one of the incredible things that Carolyn helped create was the Flint Festival of Choirs – a weekend-long event that combines the Mawby Chorale and UM-Flint choirs into a mass choir of around 150 singers. The event also features a concert, as well as workshops with a master clinician. The festival, which is usually held in March, embodies Carolyn’s spirit. “It focuses on spreading the love and joy of music making,” says Matthew. “It simultaneously exposes area singers with new chorale techniques and a master clinician to the ‘amazingness’ we have happening with chorale music in Flint!”

Every rehearsal with Carolyn was like taking a master class in not only music, but in life, recalls Sue McKenzie, who sings soprano and was considered by Carolyn to be the “daughter she never had.” “Her musical insights extended beyond the page,” she says. “Her life mirrored the beautiful sounds she brought out of the people she touched.”

The Carolyn Mawby Christmas Concert is a magical way to start the holiday season. This year, the group will perform many favorites such as “Silent Night,” “O, Holy Night” and “Mary, Did You Know?” The entire chorale will perform “A Musicological Journey Through the Twelve Days of Christmas.” “We have a pretty good group of followers,” says Roberta. “And we always appreciate our audiences.”

And while Mary and Matthew had big shoes to fill, it is evident that this passionate group is delighted that the same high standard of performance has continued. Carolyn’s legacy lives on – in many hearts and in the performances of the Carolyn Mawby Chorale.

Photography by Eric Dutro & Courtesy of the Carolyn Mawby Chorale