Youth who are detained in Genesee Valley Regional Center (GVRC) can become very quiet voices in a society that finds it easier not to think about them, let alone give them a platform from which to speak. But, The GVRC Share Art Program, a partnership with Buckham Gallery, gives these kids a space where they can cultivate and develop their voices. It’s a place to find positive relationships and a way to express themselves, to learn from the voices of historical figures and role models, and also think critically about themselves and their environment.

The GVRC admits kids ages 10-18 who were ordered into a juvenile detention facility (JDF). According to youth.gov, the risk factors for youth ending up in a JDF include the individual, their family, peers and neighborhood. For example, a child who grows up in poverty, without positive peer relationships, or family and friends who support positive behaviors over undesirable ones, are at high risk for making bad choices that lead to negative consequences. With all of this potential for negativity, the main purpose of the art programs at GVRC is to involve these young people in positive relationships and positive ways to express themselves. 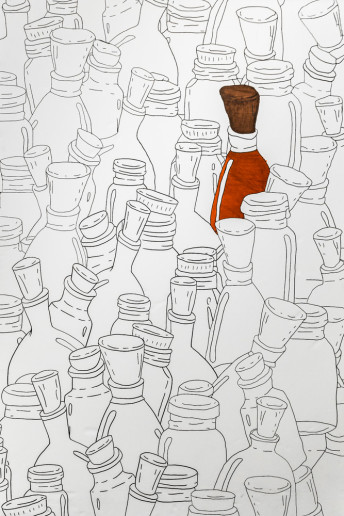 The program began in 2011, with a 12-week pilot project, and has expanded to workshops held three nights a week in visual arts, spoken word poetry, theatre, and dance/movement and most recently, the Arts on Probation project. The art created in the program is then shared with the community during Buckham Gallery’s annual “Arts in Detention” exhibit and through an annual collection of poetry written by girls in spoken word poetry workshops. Herstory: Unlocked, which addresses the unmet needs of young female residents, in both spoken word poetry and dance workshops, was developed by writer and UM-Flint Collegiate Lecturer, Traci Currie, Ph.D. and Emma Davis. The Boys Visual Arts workshops, facilitated by local artist, Todd Onweller, focuses on completing tasks and making something new – positive rewards that maintain an atmosphere of growth. 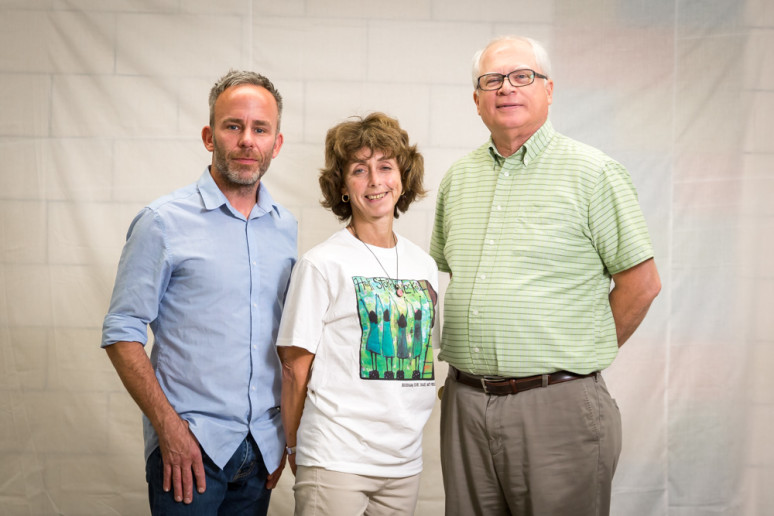 “The arts are a way to help address individual and social conflicts.”
SHELLEY SPIVACK

Flint attorney, Shelley R. Spivack, Founder of the GVRC Share Art Project, says the program began when she responded to the Ruth Mott Foundation’s Share Art program call for grant applications. Spivack’s experience as a member at Buckham Gallery and a juvenile court referee motivated her to apply. “GVRC used to have an art program, and I knew that because it was really meaningful to some of the kids I represented,” Spivack said. “When I would meet with some of them, asking what art they created was immediately a way to connect with them. It gave them something to do and look forward to; a means to express themselves while they were being detained. After we applied for the grant to bring arts back to the GVRC, it has been steady progress since.” 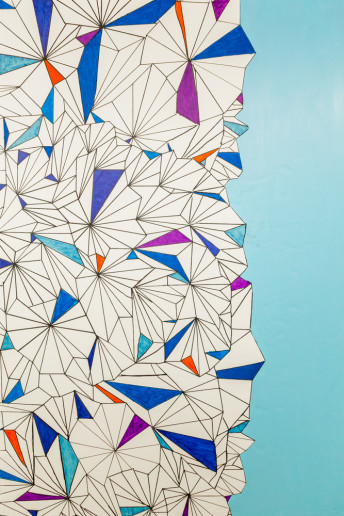 Spivack explains, “The program instructors are either members of Buckham, part of another creative group in Flint, or teaching at one of the colleges.” Currie, a faculty member in the Communications Studies Department at UM-Flint developed the spoken word workshops that began in September of 2011. “A bit of my energy revolves around supporting youth and cultivating their creative spirits while applying this cultivation to their everyday lives,” she says. “The arts are a way to help address individual and social conflicts. My job is to show them ways to use the arts for this purpose. Namely, when we use our voice (i.e. spoken word), we are verbally naming and voicing the issue that sometimes sits silently in our bodies. Silence can lead to frustration, anger and sickness, if we’re not careful.” Currie continues, “I use the arts as a way to redirect anger, in addition to expressing the here and now. The goal is for youth to recognize the importance of living and focusing on the present moment by acknowledging their powerful presence as human beings.” Currie explains that they practice this through discussion, through poetic writing exercises and by verbally sharing their stories, poems and writings.

Todd Onweller is a Buckham member and one of the original instructors, leading the boys’ visual arts workshop since 2011. “Our class is very organic and I have all the freedom in the world to develop it,” he shares. Ultimately, the goal is to make them successful and not have them frustrated at the end.” Onweller develops the workshop to be a positive challenge, and follows their interests with a focus on completing tasks and connecting the artistic activity to life experience. “We employ pretty much anything they are interested in learning, and we work on it as a group. That creates a bond, because they see that we’re struggling on something together.” Onweller adds, “this year, I chose to make it about skill sets – I wanted to teach them skills they could apply to a job. Although we are producing things, the art is secondary to getting a basic understanding of skills they could use to help support themselves and be a part of the community.” 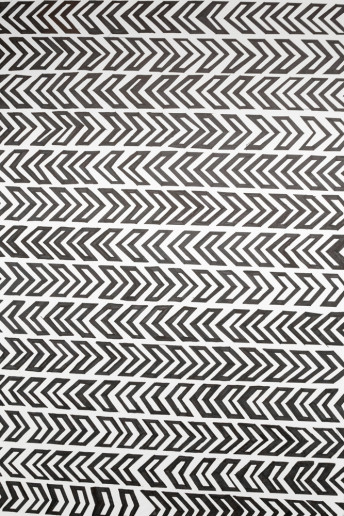 Onweller says the biggest thing over the years connecting with the kids is, “given the proper amount of love and care, they could all be something positive for the community. I haven’t worked with one person who was a lost cause.” He has seen, time and again, kids rising to the challenge of difficult tasks. “We spend a lot of time trying to figure out what ‘went wrong’ with these young people, but the focus of the art program is only on the positive,” he says. “We’ve seen 4-5,000 kids and despite the bad moods, the ADD, the bad manners, they all come out shaking your hand and being polite. They’ve come out of negative situations and they need positive connections.”

According to GVRC Program Manager, Steve Kleiner, “the staff at GVRC sees that the kids are benefiting from these programs and it relaxes them – they see nothing but positive from it and that is why we continue to support it.” Kleiner continues, “the art program is something the youth look forward to because it is something they can do. They get a sense of accomplishment they haven’t had before. No matter where they end up when they leave here, if they have it within them that they can do something well, it gives them a sense that they can do better. A lot of influences go against them, and they need to have something positive inside them.”

The newest addition to the Buckham/GVRC Art Program was motivated by outgoing students of the GVRC Share Art workshops. In the focus groups and surveys, kids continually stated that they wanted to continue the art program, Spivack says, “they told us that they want to be able to do this, not only for the weeks they are here, but on the outside, as well.”

Starting September 25, they partnered with Genesee County Family Court for a new, 12-week pilot project taking place at the Juvenile Probation Office in the McCree Building each Monday from 3:30-5pm. The “Arts on Probation” project is an exciting continuation of the Share Art program for the youth on probation to participate in. 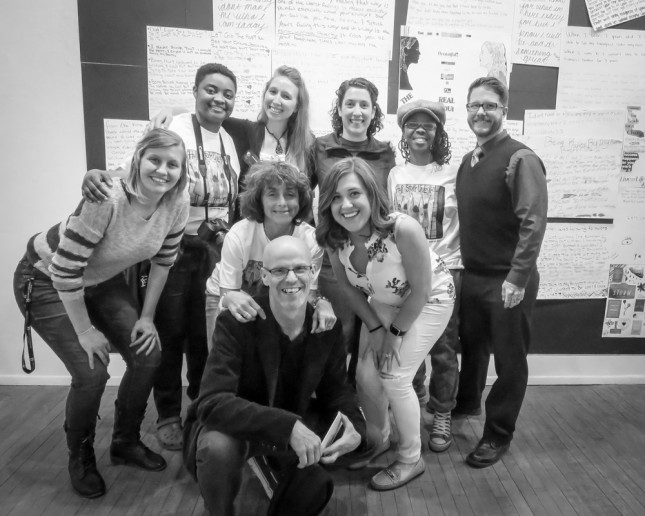 Sharing art with kids in detention and then sharing their art with the community is good for everyone involved. According to Spivack, “when we have the community exhibits each year, I see all the people from ArtWalk reading the pieces the girls have written and seeing the projects the boys have made, and they are realizing that these kids are human beings, they have potential, and they are part of our society. To me, that makes a difference. We’re not only helping kids here, but we are opening the eyes of other people to see that just because somebody is locked up, doesn’t mean they are gone.”

Plans are in place for the creation of “Friends of the GVRC Share Art Project,” which will invite community involvement.
For more information on the program and upcoming exhibits, visit  buckham-gvrc-share-art-project.org.

Photography by Eric Dutro and provided by Traci Currie