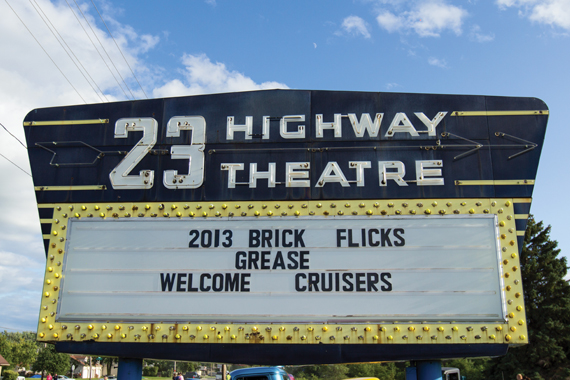 Event Coordinator Denny Keyworth says that he got involved with the B2B gang in 2008 because of his love for classic cars. “I’ve been a car guy all my life,” he smiled. Keyworth strolled the grounds with his grandson Derek, who no doubt holds to his grandfather’s affinity. Al Hatch first conceived the drive-in idea in 2011. It started at Whiting Auditorium, but after 400 cars showed up the first year, he knew that they needed a bigger venue. Johnny Thomas of US-23 offered to donate his space the following year. Over 1,500 people came in 2012, and 2,000 guests were estimated to have attended this year.

Several attendees decided to dress the part and arrived in ’50s garb. Tom and Tiffany Glesenkamp were on the drive-in grounds and spoke with My City Magazine. The grandfather/granddaughter duo brought a beautifully restored, 1977 black Chevrolet Corvette for what was Tom’s sixth year at B2B and Tiffany’s first. Tom said, “I like the camaraderie of everyone at Back to the Bricks, and seeing the talent involved in building these cars.”

Also among the sea of cars and people was the Antique Automobile Club of America’s Flint region. Carol Tremble serves as the Flint AACA president. She enjoys taking “little tours driving around on country roads” when coming out for events the likes of B2B.

Check out our coverage of Back to the Bricks in this revved up issue of My City Magazine.

Are you interested in purchasing photos from this story? Go HERE and select the “Bricks Flicks” category.