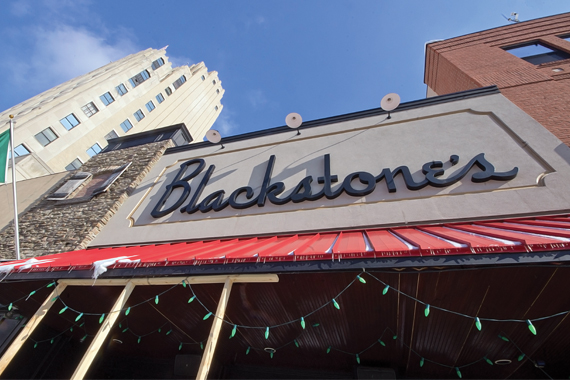 A famous Irish proverb says, “Laughter is brightest where food is best.” And that is what you’ll find at Blackstone’s Authentic Irish/American Gastro Pub located in Downtown Flint – plenty of laughter and some really, really good food.

With St. Patrick’s Day just around the corner, Blackstone’s owners Dave and Heather Lurvey plan to honor the festive occasion by offering their patrons traditional Irish fare. Corned Beef & Cabbage will of course be served all day, according to longtime chef and Lurvey family friend, Jim Hackney. “Traditional Irish dishes are always well received,” he says of delicacies like Shepherd’s Pie – made with ground lamb and vegetables in gravy, topped with creamy mashed potatoes and baked crispy – and Fish & Chips, which will be on the special menu. Another tasty treat prepared especially for St. Patty’s Day is Scotch Eggs, which consists of hard-boiled eggs swaddled in sausage meat, then breaded and fried. This gastropub staple is so popular that supply does not keep up with demand!

My City Magazine met up with the Lurveys to talk about the restaurant that helped spur the city’s revitalization. As Downtown Flint’s first new eatery in years, Blackstone’s has not only become a regular lunch stop for Downtown business owners, workers and college students, it’s a popular destination for patrons to enjoy a meal on a busy weekend, before enjoying a cultural event, or after one of Flint’s many celebrations. Blackstone’s also does a robust catering business in the area.

At Blackstone’s, day-to-day operations are primarily overseen by Heather, as Dave is busy running his construction company. She is also a busy mom to the couple’s two children, Emma, aged nine and Andrew, six. “They’ve grown up with our restaurant,” laughs Heather. The kids can often be seen helping the staff roll silverware with napkins during the summer months when school is out.

Next month, the popular pub will celebrate its fifth anniversary, and the Lurveys say that the first five years have not been without challenges. But Heather believes that Blackstone’s now has the best chef, the right staff mix and the menu to give customers what they want. She is proud to have her mother, Patti Bergstrom, as general manager, who keeps the place running as smooth as silk. The best thing to come out of the last five years, however, is the loyal group of Downtown Flint patrons who stand behind Blackstone’s and continually support them. “We can’t thank them enough!” exclaimed Heather. To celebrate their fifth anniversary, the Blackstone’s menu will feature several special dishes from Thursday to Saturday during the week of April 17. “We’ve come a long way!” Heather exclaimed. “Join the party and celebrate with us!”

Chef Jim has a long, solid background in the food business, having been the chef years ago at the Farm Restaurant on Clio Road, and at two resorts in Western Michigan. He was also head chef at General Motor’s SPO Headquarters until he retired in 2009. Before he could take a breath, Heather lassoed him into overseeing food preparation at Blackstone’s. And the food definitely makes a visit to the restaurant worthwhile, offering a mix of traditional Irish and modern American fare. According to the chef, the most popular dishes are the pub burgers and Fish & Chips – cod dipped in a flavorful Harp Lager batter. Chef Jim is excited about the upcoming move of the Flint Farmers’ Market to Downtown, which will allow Blackstone’s easy access to the area’s finest and freshest produce. “We like to use local products whenever possible,” said Heather.

Chef Jim has a simple philosophy: “If you treat a customer like you’re making a meal for your mother, that customer will return.” And that’s exactly how it’s done at Blackstone’s. All of the soups are homemade and served piping hot, says Jim. Their famous Irish Onion Soup is a rich Guinness beer broth simmered with caramelized onions, then topped with croutons and a house cheese blend. During our visit, My City Magazine sampled the Soup of the Day: Hungarian Green Bean, a rich and creamy broth with green beans and sausage, which was scrumptious! “We also make our own potato chips,” boasts Heather. Another popular Irish dish is Boxty – Blackstone’s own creation – a potato pancake sautéed golden brown and topped with bacon, scallions, Dubliner cheddar cheese and sour cream: comfort food at its finest. If you’re visiting on St. Patrick’s Day, you can’t eat at Blackstone’s without sampling Jim’s homemade Corned Beef Hash, a St. Patty’s special. “I learned to make it as a young chef,” he smiled when asked how he made it so special. 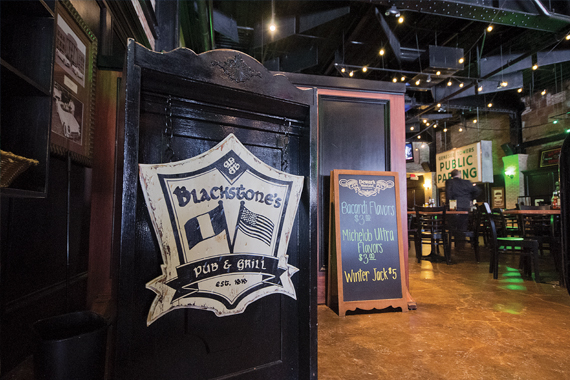 Blackstone’s extensive menu also includes unique and delectable homemade desserts. Heather says the hot and comforting bread pudding served with Irish whiskey sauce is a favorite. At the bar, patrons can Pick-a-Pint of their favorite beer from an assortment of 15 on tap, including several Michigan microbrews. Many Downtowners unwind after a long day at the office with a vodka martini, Bloody Mary or a pint of Guinness. Of course, a hot Irish coffee warmed up many Blackstone’s customers during this year’s particularly harsh winter. Some patrons come in just to hang out with head bartender, Spencer Ruegsegger. “Everybody knows Spencer,” laughs Heather.

Tina Simpson has been a server at Blackstone’s since it opened. “I really like the environment here,” Tina says. “Downtown has come so far in the last ten years. It’s coming alive.” Heather says she enjoys interacting with the many “regulars” who come to Blackstone’s for Happy Hour. And Blackstone’s patrons enjoy coming to a place where everyone knows their names. One group of attorneys has become just like family, laughs Heather. She said they’ll even step behind the bar to help out when things get busy. “They have a vested interest in this place,” she smiled.

As a Downtown business, the Lurveys always look forward to the excitement of warm-weather festivals and events, including Back to the Bricks and the Crim Festival of Races. And very near and dear to her heart is the annual Pink Night fundraiser, hosted by Blackstone’s for Making Strides Against Breast Cancer, a party that fills the house for a worthy cause.

Heather says all of the Downtown restaurant owners work together and support each other. “We are all in this together,” she says. “We’re helping to revitalize Flint.” Blackstone’s is certainly a welcome sight on S. Saginaw Street for Flint residents looking for signs of growth!

See more photos HERE, or purchase photos from this story by going HERE and selecting the “Blackstone’s” category.