For nearly 50 years, Bill Harris has been a familiar face in the field of broadcast news and has been a news producer/reporter/anchor in Flint since September, 1977. Now anchoring the 10pm news with WSMH FOX66, he has not only gained the respect and admiration of his co-workers over the years, but also a large following of TV viewers who respect his trustworthy reporting. Bill sat down with My City Magazine to chat about his many years in the news business.

Born and raised in the small town of Holyoke, Massachusetts, Bill got his first broadcasting job with a radio station in Holyoke at the age of 16. “I was a radio guy first,” he remembers. “I had always wanted to be a broadcaster.” He also worked for another radio station in Springfield, Massachusetts. “I had two gigs – one in classical music and the other in rock and roll.” 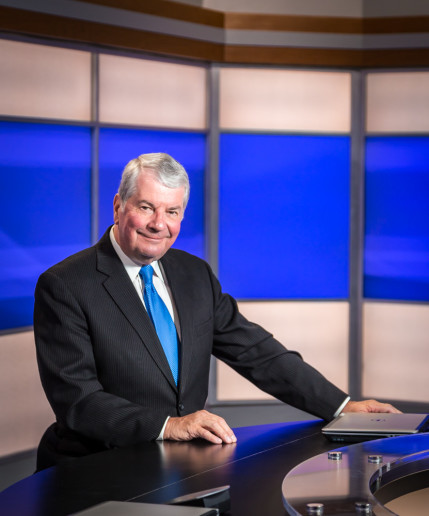 After high school, Bill attended Boston University and received a Bachelor of Science degree in Broadcasting, Film and Social Psychology, and then went to work at a television station. “I always thought radio would be my career; but frankly, I got bored with it and took a stab at TV at an NBC affiliate in Springfield.” He worked behind the scenes in the production department. “I loved production and being in the control room,” he says. Then, he got bit by the news bug. In 1972, he took a job with Channel 22 Western Massachusetts, directing three times a week and anchoring at the news desk twice weekly and on weekends. “The first news director I worked for was a Kennedy, Edward Kennedy,” Bill remembers. He stayed at the station for five years and was “happy as a lark.”

Moving to the Vehicle City

With his feet firmly planted in the news industry, Bill decided it was time to “test the waters,” so he applied for a position at a news station – location unknown. “I almost laughed when they told me it was Flint,” he admits. “But they saw my audition tape and flew me out. I thought to myself, what the heck? Free flight, free dinner.” He said he’ll never forget being driven from Bishop Airport in a big Chevy Suburban for the interview with ABC 12. While driving back to the airport, he was offered the job of producer/anchor. “I had a huge decision to make,” he remembers. “It was the longest Labor Day weekend for me.” 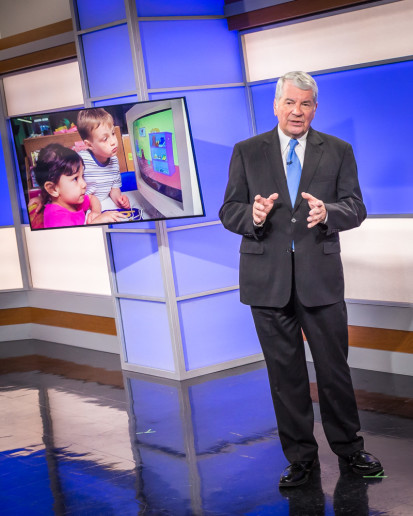 Bill took the job and started on September 26, 1977, just seven days after the interview. “Now, I’ve been doing news here in Flint for 40 years,” he smiles.

After moving to Flint, Bill met his wife, Jane. They have two adult children – their son, Christopher, has followed in his father’s footsteps and is chief engineer at NBC25/FOX66. Jane has worked with the Michigan State Police for many years. Their daughter, Nicole, also studied broadcast journalism and is a special project coordinator at Holy Family Parish. The family has all established firm roots here and all live in Grand Blanc.

Bill’s career at ABC 12 was very long and successful. In his 30 years as an anchor, reporter and producer, he received nine Emmy Awards and numerous Emmy nominations. “It was wonderful working there,” he shares.
“Your services are no longer needed.” 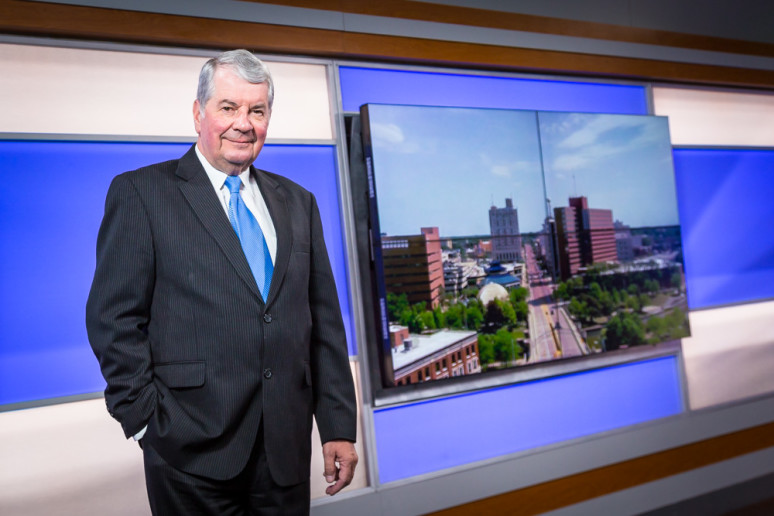 In 2007, ownership of the station changed hands. Before the ink on the deal was even dry, Bill heard that his boss had been shown the door. “I thought to myself ‘this is not looking good,” he says. On that same day, Bill had received news that a State Trooper he knew had been killed in a high-speed chase in Bridgeport, so, his heart was heavy. Then, he heard that his good friend Joel Feick, a weekend anchor, was told his services were no longer needed. After hearing that news, Bill saw the flashing red button on his desk phone – a waiting voicemail. “I knew right away,” he remembers. He went upstairs to hear the same devastating words: your services are no longer needed.

“I didn’t have any hard feelings,” he recalls. “It’s part of the business.” But he took the back way out of the station to give himself a little time for the news to sink in. His son was waiting for him at the bottom of the stairs. “We shared a private moment and then I went home.” Bill was immediately surrounded by his loving family and held what he described as an “Irish wake.” Then, the phone rang – a call from the Michigan State Police (MSP) asking Bill to assist in the planning of the funeral for his Trooper friend who had been killed. “I’d be honored to,” was his reply.

The news of Bill’s farewell at Channel 12 caused quite a media frenzy and the phone rang off the hook – radio and news stations wanting to talk to him. Bill felt luckier than most of those who lost their jobs because, with his 30-plus years of service at the station, he was able to retire. “I have a flood of memories of my years with Channel 12,” Bill admits, “and they’ll never be forgotten.”

One month later, he accepted a position with the
MSP Training Division. “When one door closes, another always opens,” he says with a smile. He stayed with the MSP for one year. 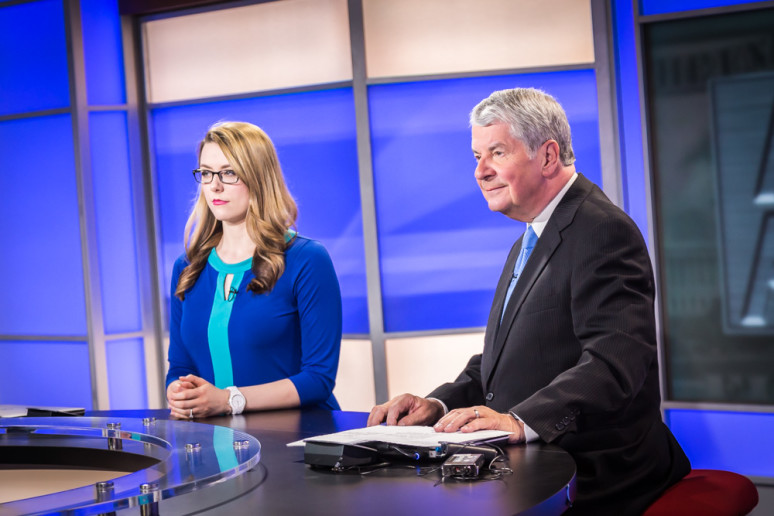 Bill got bit by the news bug again and feelers were out for a position with NBC 25. Although he enjoyed his work with the MSP, he missed the news desk. “I missed it terribly,” he admits. After receiving an offer that appealed to him, he joined the NBC 25 news team as the 6pm anchor on January 30, 2012. And, a lot of great things have happened at the station since he’s been there. Operations of NBC 25 and Fox 66 news stations were consolidated and a state-of-the art news station was built a year ago, equipped with the latest technology, and the size of the news room was tripled. “This is not your grandfather’s TV station,” he laughs.

In his many years working in broadcast journalism, Bill has met many people and had “experiences of a lifetime.” He has flown with the U.S.A.F. Thunderbirds, interviewed Walter Cronkite as a cub reporter, and interviewed Peter Jennings. “I was mesmerized with his September 11 reporting,” Bill shares.

The story that stands out, though, is the one that followed Bill’s own personal battle with prostate cancer. He made the decision to share his story to benefit the community by raising awareness of the disease.”Never in my wildest dreams could I have predicted the impact it had,” he states. 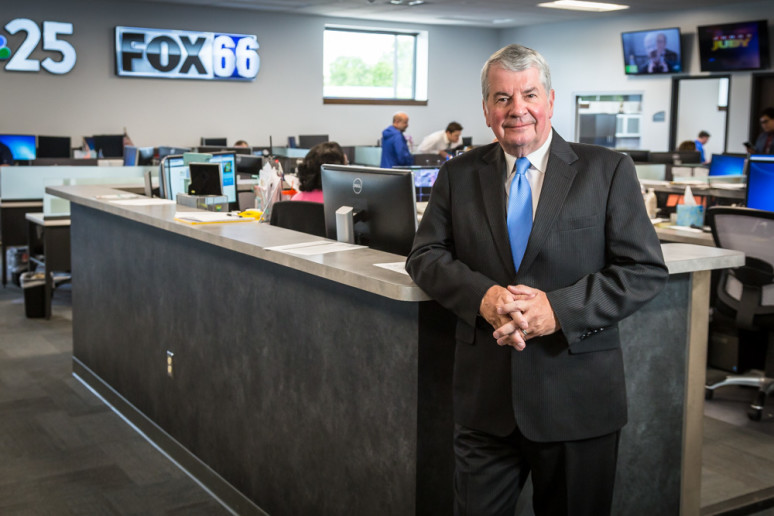 Bill’s contract with NBC25 ran out recently, but he was asked to stay on and anchor the 10pm news. “It’s the smartest thing I ever did!” he exclaimed. “It’s fast-paced and exciting and I work with a lot of great people.”

This year, Bill was again nominated for an Emmy Award for Best Michigan News Anchor – his 15th nomination. “Being nominated is an incredible honor,” he says. “There were only three nominated in the entire state and two are from Flint.” Out of the nine Emmys he’s received, four have been for Best Anchor.

Bill believes that his continued success in broadcast news is due to the fact that he has maintained the ethics that were instilled in him as a cub reporter. What he appreciates most are the viewers who have placed their trust in him over the years, “It means so much,” he says. “I owe my career to them.”

“I have a flood of memories of my years with Channel 12, and they’ll never be forgotten.”

“Bill and I were let go on the same day at ABC 12. While it was a shock, it rejuvenated us both to find new work. Who knew that NBC25 and FOX66 would grow so much during our time here! We are blessed with management we respect and a newsroom vibe that is enviable. Bill goes way back. (I think he knew Marconi). We all look up to Bill for his years in the trenches. He has seen it all. I’ve been lucky to work next to the guy for over 30 years.”