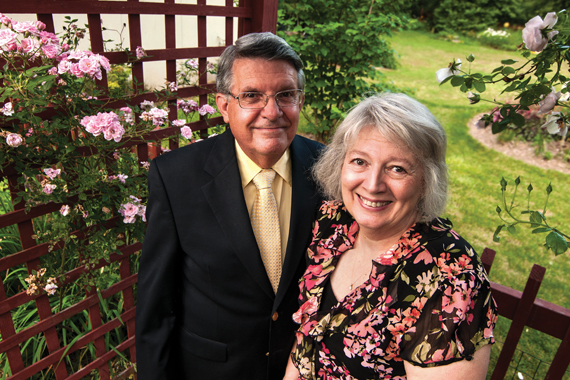 What does it take to be a Red Cross volunteer during a disaster? Mundy Township residents Richard and Carole Beauchamp know what it means to cope with the chaos and emotions at the scene of a catastrophe. Richard said he became a volunteer at the local Red Cross Genesee/Lapeer Chapter at the suggestion of his wife, who is a mental health professional and longtime Red Cross volunteer. “She thought I should try it,” he said. Being in the tax business, Richard initially went with the safe decision and volunteered his services to manage the organization’s accounts receivable.

One day while volunteering, Richard watched his boss trying to help a couple who needed money to address a medical issue. Due to a snag in the system (rules are rules), there just wasn’t any way possible his boss could find the needed funding, and he had to send the couple away empty-handed. After they left, Richard watched as his boss spent hours on the telephone, trying to come up with a way to help this young couple. Finally, his boss emerged from his office shouting with joy. “I found the money, I found the money,” he exclaimed with tears streaming down his face. “From that moment, I knew this was where I wanted to be,” Richard reflected.

Richard knew he wanted to make a bigger impact, so he began the rigorous Disaster Assistance Training program, which consists of three different courses. That was 12 years ago, and today he is one of approximately 75 disaster volunteers at the local Red Cross, helping direct the efforts during a crisis. “I’m the guy who sends everybody (volunteers) out,” he said. When an F-2 tornado struck the city of Fenton a few years back, Richard was the Damage Assessment Officer. He teamed up with other volunteers and had the assessment done in just a few hours. Because of their efficiency, the city asked the Red Cross volunteers to take over a shelter that was set up at the former middle school.

Carole and Richard have volunteered during many national disasters, including the hurricane that hit Puerto Rico in 1997. Carol has been sent out to over 30 disasters around the world, and at the time of the My City interview, she was in Anchorage, Alaska, assisting at the scene of a plane crash. Those who volunteer in the area of disaster assistance are on call and ready to help, 24/7. “There is quite a time element involved,” said Richard, and although he never knows what to expect when heading out to a disaster, Richard says, “It is a very fulfilling experience to help.”

Locally, Richard has assisted during the flood in Swartz Creek this past year and the recent wind storm that cut off power to thousands of Genesee County residents. During any local disaster, the volunteers make sure that victims’ basic needs are met: food, clothing and shelter. Richard has seen many people lose their homes during natural disasters, “but what they’re most upset about” he says, “are the photographs and the memories they lose: the stuff you can’t replace.” His experiences have taught him a valuable lesson: “Volunteering makes us appreciate what we have,” he says, “It can all be gone in an instant.”