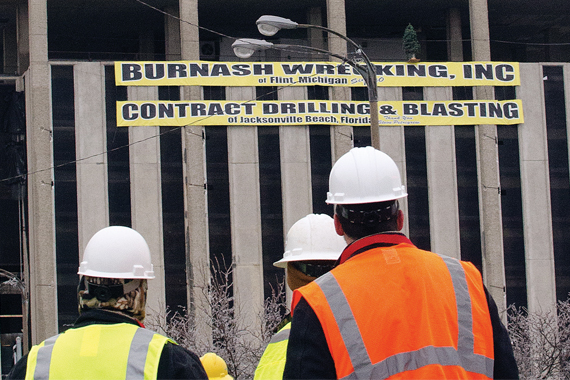 ‘Twas the tail end of 2013 as we watched the Genesee Towers hit the ground. Gasps and cheering were heard on several blocks as the building fell and the dust began to rise, but as the enormous cloud settled, the customary rumor mill-style chatter began to rise.

“Who owned the building?”

“What’s going in its place?”

In time, the dust began to clear. Ridgway White clearly spelled out the plan to create an outdoor scientific exploration park for children. The usual suspects of the Genesee Regional Chamber of Commerce and Charles Stewart Mott Foundation were the names on everyone’s lips, and the outsiders, Steve Pettigrew, et al., gained notoriety. One of the many players involved, who seemed to be just another name in the mix but who had a lot to do with the implosion, virtually the whole process, was Burnash Wrecking.

Burnash Wrecking of Flint has been a quietly “exploding” force in our world for generations. Started in 1940, the business changed hands from father to son in 1981 when the oldest of nine sons took the helm. The intergenerational transition proved shaky as many outstanding debts from the preceding generation looked to close the doors of the family business. But hard work and a loyal client base would pull Burnash through, and today, much of the delegation authority comes from the third-generation Burnash, named Kyle.

After a brief conversation with Kyle, it was clear that the oversight in the narrative of the implosion of the Genesee Towers was Burnash Wrecking. They were “the only local contractor who had a chance to bid” on the job. They were at first passed up by the building owners, but they would later be called back to the bargaining table. After being fully vetted and officially recruited by a company called Siwek – who in turn were hired by Uptown Reinvestment as a general contractor – Burnash would recruit implosion expert Steve Pettigrew at an out-of-state contractors’ convention for his assistance in the project. Hence, everything from the incessant clanging of metal and concrete to make recesses
in the walls for the explosives to the current removal of the remaining wreckage was headed up by Burnash.

The benefits of having Burnash lead the demolition were the additional local contractors employed for other jobs, such as C & M Wire Rope & Supply Co. for electrical needs and Flint Welding Supply Co., providing welding services. It pays to go local.

Past major projects include the demolition of the building that once stood where the Wade Trim building and its neighboring green space now exist. Where local “demo” is needed, Burnash Wrecking is on hand.