Back in the day, anyone with basketball skills – and a ragtag team – would challenge neighborhood opponents to “prove themselves” on a court at Berston Field House, located at 3300 Saginaw Street. Built in 1923, every generation since then proudly meets up at Berston for friendly competition and to earn a favorable reputation – or bragging rights! 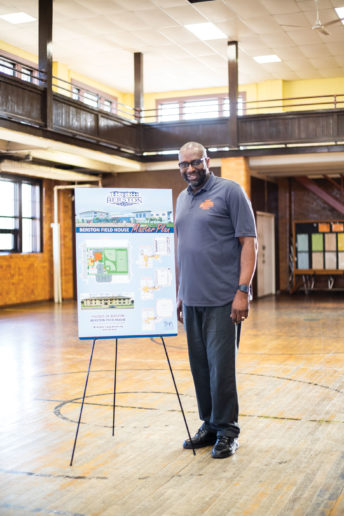 Bryant Nolden, Executive Director of the 95-year old sports and arts recreational facility which currently serves more than 800 area youth, is proving to Flint’s north side exactly how teamwork can add up to a $14 million expansion.

The multi-million-dollar project is going to be impressive, according to Nolden.

“In 2017, we received funds from C.S. Mott Foundation to do an assessment of the physical needs of the building,” says Nolden, known as “BB” around Berston. He single-handedly kept the doors open when the City of Flint couldn’t afford its upkeep during the economic downturn. Nolden, a retired 25-year Flint Community Schools teacher and current County Commissioner, has a soft spot for the recreational center.

In 2009, he bought a snowplow truck to keep the parking lot clear, used his own lawnmower to cut the grass and cleaned the building himself to save money on contractors. Soon, City officials handed him the keys, since he was doing his best to keep the facility open for the youth.

“BB is a really cool guy,” says Devante March, who appreciates the man who runs Berston. “No matter what day it is, he opens the gym and let’s all of us young men come in and compete. He never complains about anything. He’s one hardworking guy.”

Nolden secured grants to keep the lights on and activities going. Without his humble efforts, the current proposed expansion wouldn’t have a shot. 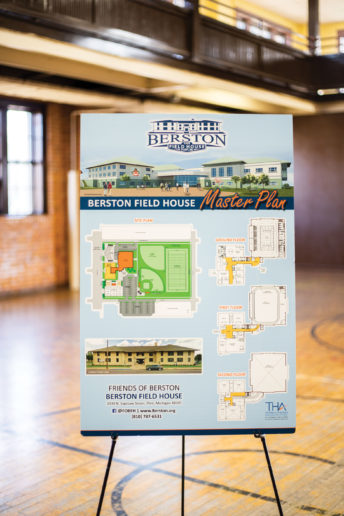 “If all the stars line up, this is what the
building and Berston campus will look like.”
Bryant Nolden, Executive Director

On any given night, Nolden says there’s a buzz of activity and events happening at Berston. The future expansion will allow its broad range of sports and cultural opportunities to increase. Some highlights which take place on-site include the bicycle safety and repair program which gives out bikes at the end of the eight-week session (it starts in May); Berston Boxing Club; Creative Expressions Dance Studio which offers tap, ballet, jazz, hip-hop and tumbling for toddlers to senior citizens and a recital at The Whiting in May; Chosen Few Arts Council teaches drawing, dancing, drumming and arts and crafts, and there are fitness classes for all ages. In addition, there’s a weekend softball league, a computer room and library.

“If all the stars line up, this is what the building and Berston campus will look like,” he says pointing to the full-color conceptual drawing. The comprehensive master plan, designed (at no cost) by THA Architects Engineers, was a gift. “They [THA] were generous to us and provided their services in-kind,” Nolden says.

The new, proposed modern gymnasium will offer community members more versatility. “The current gymnasium is not regulation size,” says Nolden. “The new gym will seat 150 spectators and it’ll be available for Amateur Athletic Union (AAU) teams, and anyone else to play basketball games.”

Devante March spends a lot of his free time at Berston. “It’s like a big family – you can come play basketball with friends and family from all over the city – with no hate or animosity towards each other,” he says. “It’s always open to learn and free your mind with dancing and boxing, too.” 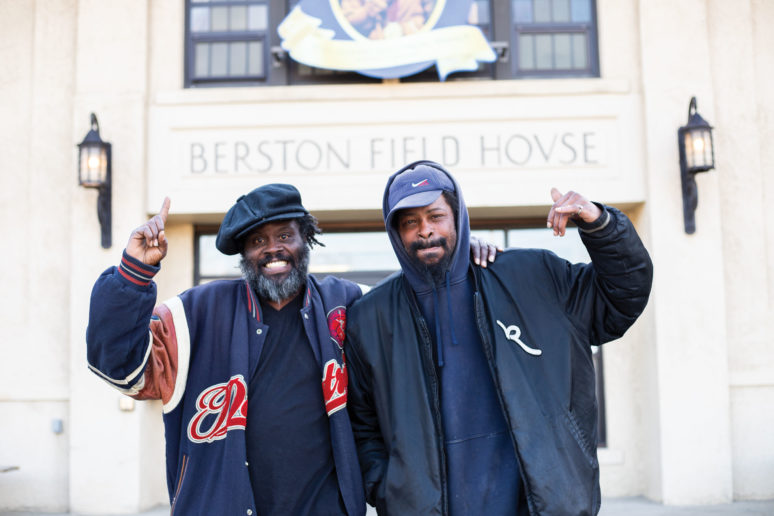 Since Berston is one of the recipients of the recent Arts Education and Cultural Enrichment millage passed by Genesee County voters in November, Nolden says they have funds for programming in place for the next decade. “This freed up our operational expenses and has allowed us to begin the expansion process. We will unveil the full scope of the development at the launch of the capital campaign set for November 9 at Gateway Center in Flint – “‘A Night in Paris’ is the theme,” he says.

Nolden and his board of directors have been working behind the scenes for the past two years to get ready. For example, they’re negotiating with Mt. Hermon Baptist Church to acquire the remaining three acres surrounding the Berston campus – that structure will be razed to create needed parking space. They own most of the land on Dewey and Pasadena Streets. They’re conducting an environmental study and appraisal of the area, and will soon make an offer on the church lot. They are currently conversing with potential funding partners such as the Hagerman Foundation, Ruth Mott Foundation and others.

Besides garnering support from big name foundations, Nolden has a way of including everyone. The guys who hang out in the community around Saginaw Street can’t offer monetary support, but they offer their time and manpower to Berston in their own way. “I like taking care of the grounds and keeping things safe at Berston House,” says Flint native, Michael Westbrook. “Keeping it clean is a priority of ours.”

“I like taking care of the grounds and
keeping things safe at Berston House.”
Michael Westbrook

Fellow Berston supporter, Nigel March agrees. “We’ve got our own spring clean-up program in place,” he laughs. The group of men, who serve as an unofficial security and clean-up crew, trims bushes and picks up bottles and trash around the facility. “We pull out old bushes and try to make it safer. We make sure everything is alright around here,” adds March.

Nolden says everyone shows respect for Berston. “There’s something about it,” he says, “people just take pride in it. The momentum for the new project will transform this whole area. I claim this project in Jesus’ name and I know he’ll pull it off.”

Keeping it all in perspective and taking it step-by-step is Nolden’s style.

“The project is going to have to be done in pieces,” he says. “We certainly don’t have $14 million all at once. Our initial goal is to raise $400,000. We hope to transform the current boy’s and girl’s locker rooms into the boxing club area – and then build the new gymnasium. We can move all of the programs into the new gym while the rest of the campus is under construction.”

Nolden is taking to heart Berston’s status as a “proving ground” for reputations. He’s giving his all to leave Flint with a legacy of growth at the historic site.