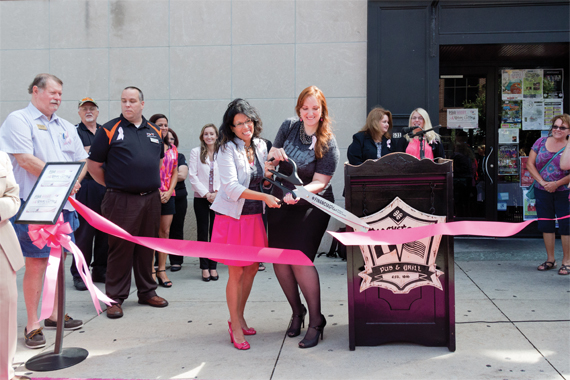 A ribbon-cutting ceremony was held at Blackstone’s Pub & Grill in Downtown Flint on August 1 to kick off Financial Plus Federal Credit Union’s Pink Night 2013 fundraiser. Pink Night is an annual event benefitting Making Strides Against Breast Cancer, and the goal this year is to raise $50,000 for the worthy cause.

Businesspeople and community members, many appropriately dressed in pink, came out to support the cause. “We were elated with the community’s outpouring of support for our Ribbon-Cutting ceremony,” said Olga Long, Vice President-Marketing at Financial Plus. “The public continues to embrace this event and without that level of support, it would be impossible to achieve our $50,000 goal.” One of the event’s highlights was a pink-wrapped bus, dedicated to the memory of those who have lost their lives to breast cancer, intended to help raise awareness about the fight to find a cure. The MTA partnered with HealthPlus of Michigan, CBS Outdoors and the American Cancer Society to make the rolling billboard a reality.

According to Stacey Paulovich of Financial Plus, the inspiration behind Pink Night dates back to 2007 and a few driven staff members at the credit union in Flint. They rallied their friends, family, and the community to gather for one night in October and raise funds for their Making Strides Against Breast Cancer walk team. Pink Night has grown substantially from its initial fundraising total of $1,000 in 2007 to just over $46,000 in last year, 100 percent of which went to Making Strides Against Breast Cancer.

Pink Night 2013 will take place at Blackstone’s Pub & Grill on Thursday, October 3. The event features music, live and silent auctions, and of course, food as only Blackstone’s can make. “We’re humbled by the success of the kick-off and we look forward to hosting this year’s Pink Night,” said Olga. Limited tickets are available and Pink Bling can be purchased at Financial Plus Federal Credit Union’s online store by visiting pinknightflint.com.

Are you interested in purchasing photos from this story? Go HERE and select the “Blackstones Ribbon Cutting” category.