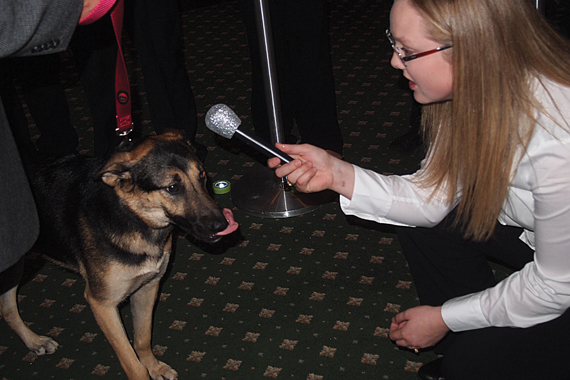 Curtain up! It’s showtime! “Barking up Broadway” was the theme of the Humane Society of Genesee County’s Ties & Tails fundraiser held on November 9, which raised approximately $40,000 for Genesee County’s premiere rescue sanctuary.

“It’s the best we have ever had!” exclaimed Dawn Johnson, Executive Director of the Humane Society. The ninth annual Ties & Tails “Dine with your Canine” event was held at the Flint Golf Club and attended by 160 people. Pooches joined their owners at the formal affair, dressing up for the occasion in bow ties and pompoms. Dogs and their owners enjoyed cocktail hour complete with Puparazzi and flashing camera lights. The guest of honor was Celebrity Ambassador Lucky, Gretchen Sommer’s beloved canine companion. Lucky was the face of “Barking up Broadway” after Gretchen won the Travel Log Dog package at last year’s Ties & Tails. Lucky was also the leader of the “Barking up Broadway” 2013 parade.

After a delicious dinner, The Broadway Show featured a tantalizing array of luxurious packages that were up for auction, including trips to New York, Chicago, Grand Rapids, Traverse City and Las Vegas, and a Flint Cultural Center Experience package, to name a few. This year’s event sponsors were very generous. Dr. Jay Miller donated $10,000 to honor his wife, Virginia. He then donated another $10,000 during the Reverse Auction. The Stella & Frederick Loeb Charitable Trust donated $2,500. West Flint Animal Hospital and Doogie’s Supercenter were acknowledged as the Silver and Premium Partners.

A highlight of the evening was the Reverse Auction, during which a bidder can donate any amount between one dollar and $10,000. According to Dawn, $19,000 was raised through this year’s Reverse Auction. Proceeds will help renovate the Surrender Room, where animals that have been abandoned, neglected, abused, surrendered or lost are brought in. It’s an emotionally charged area, as described in a moving six-minute video shown before the Reverse Auction. While Dawn and her staff were taping the video about the renovations needed for the Surrender Room, a real-life emergency occurred. A woman witnessed a man intentionally shoot his neighbor’s dog. With tears streaming down her face, she shared during the video that it was like watching one of her own children be shot and she just couldn’t leave the dog there to die. In a pool of blood, she put the dog in the backseat of her car and drove him to the Humane Society. Volunteers sprung into action and brought him inside where he was seen by an on-site veterinarian and sent to a clinic for medical care. Thanks to the woman and the actions of the Humane Society staff, the dog survived. Because he had been micro-chipped, they were able to reunite the dog with his owner. Even though it was hard to watch, the video accurately portrayed what the Humane Society does on a daily basis. “Those watching the video were extremely moved,” said Dawn. 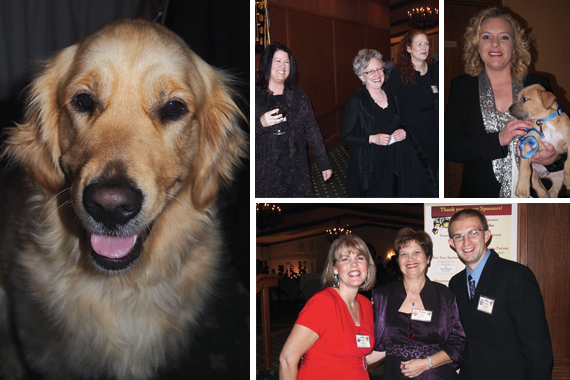 The Humane Society relies solely on funding from the local community. Every dollar donated is used to feed, house, and provide for the 175-200 animals they care for daily, said Dawn. “We are so grateful to those who support our events,” said Dawn. “We give our sincerest thanks to all who so generously gave.”

The Humane Society of Genesee County has a challenge for the community – to find a home for every animal for the holidays. The Annual Holiday of Hope Open House will be held on Saturday, December 7. The free, day-long celebration includes adoption specials, a cookie walk, pet pictures with Santa, and much more! “Come celebrate the season and bring hope to our animals,” says Dawn Johnson, Executive Director. The goal set for Holiday of Hope is to find homes for 35 animals. The Humane Society will have extended hours that day, 8am to 5pm.