Potter Valorie Horton can truly be described as “at one with clay.” She recently showed her collection aptly named At One With Clay at the Flint Institute of Art’s Art Sales & Rental Gallery. The variety of pieces included platters, bowls, and a wall piece that took her one year to make. “I wanted to show a broad range of my work,” said Valorie. “I want my viewers to force their eyes to see more, not just look at it but analyze it.” She also felt that the exhibition was a big step for her. “You are opening up your soul to people,” she said.

Valorie grew up in Flint and graduated from Southwestern High School. Her mother was artistically inclined; both parents placed a strong emphasis on music and art. Valorie began to sew at age nine, even making prom dresses for neighbors and friends from her own patterns. To her, it was a natural transition to put pieces of clay together. Prior to becoming a potter, Valorie was a skilled tradesman at General Motors where she spent most of her 30 years in skilled trades and quality management. She is currently employed at FIA as the visitor coordinator. “Pottery is something I always wanted to do,” explained Valorie. So she started attending classes at FIA. Working from her home studio for the last ten years, she continues to hone her skills and attend classes.

“I want my viewers to force their eyes to see more, not just look at it but analyze it.” 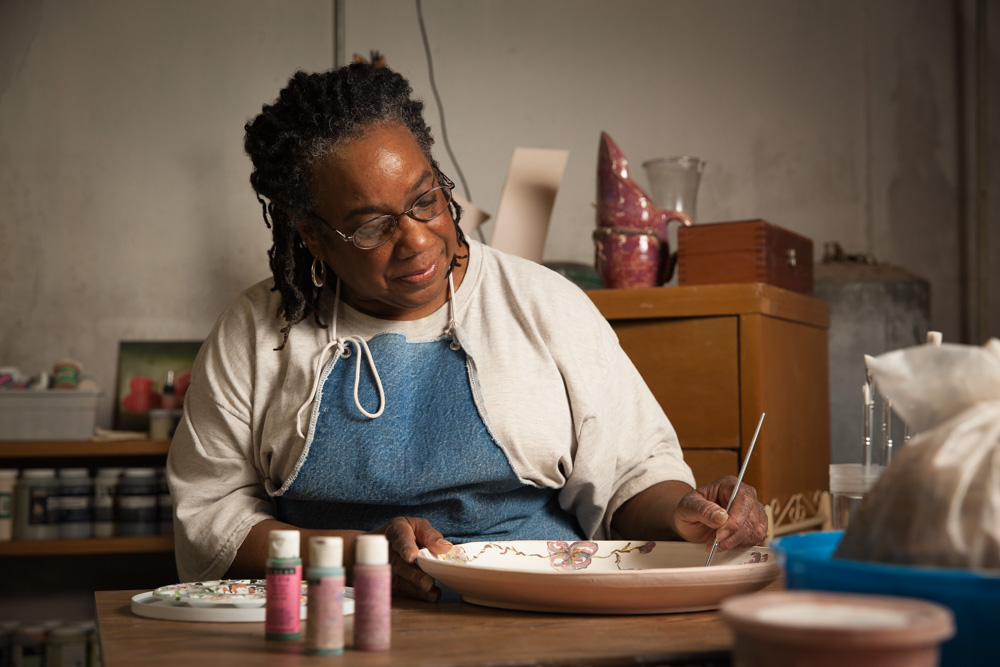 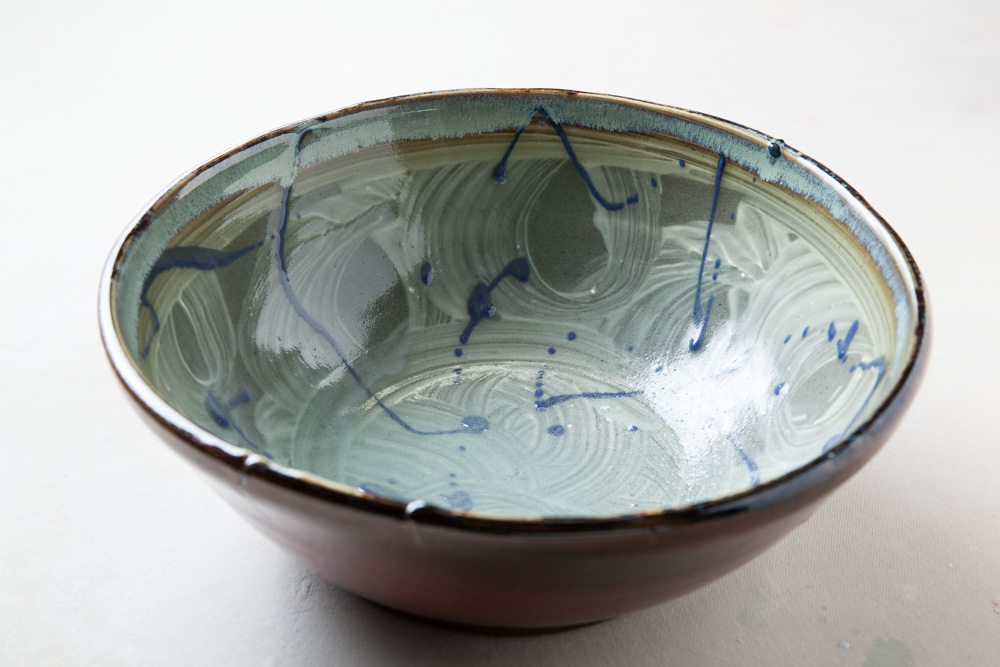 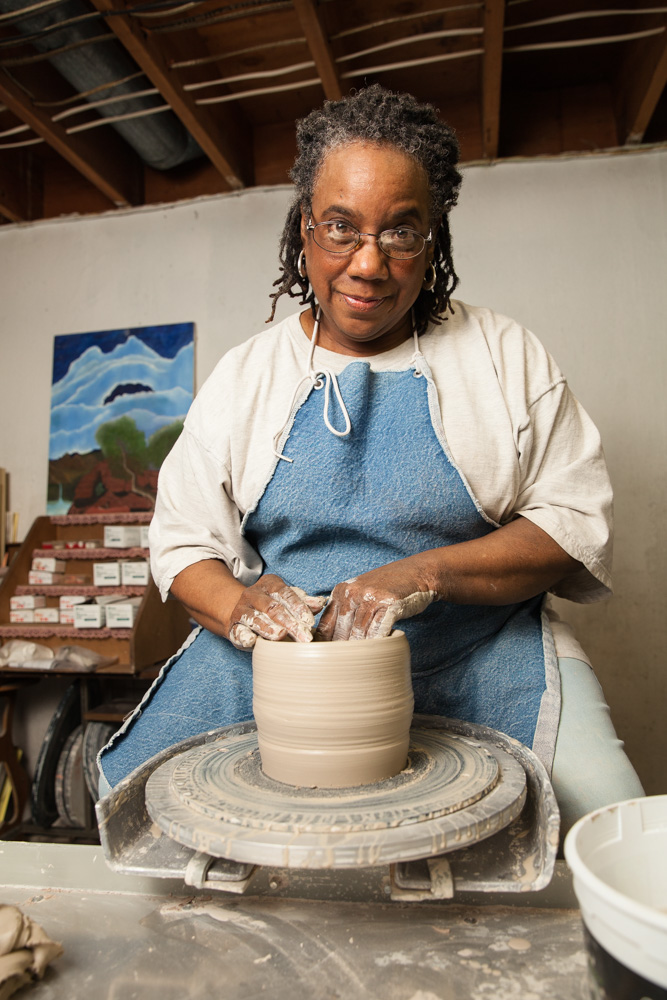 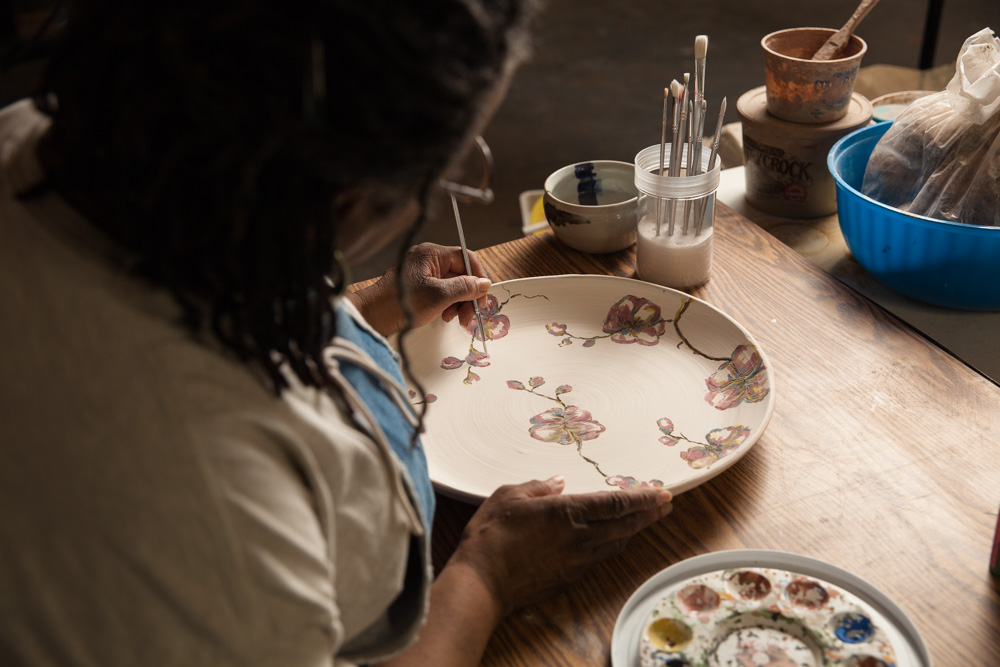 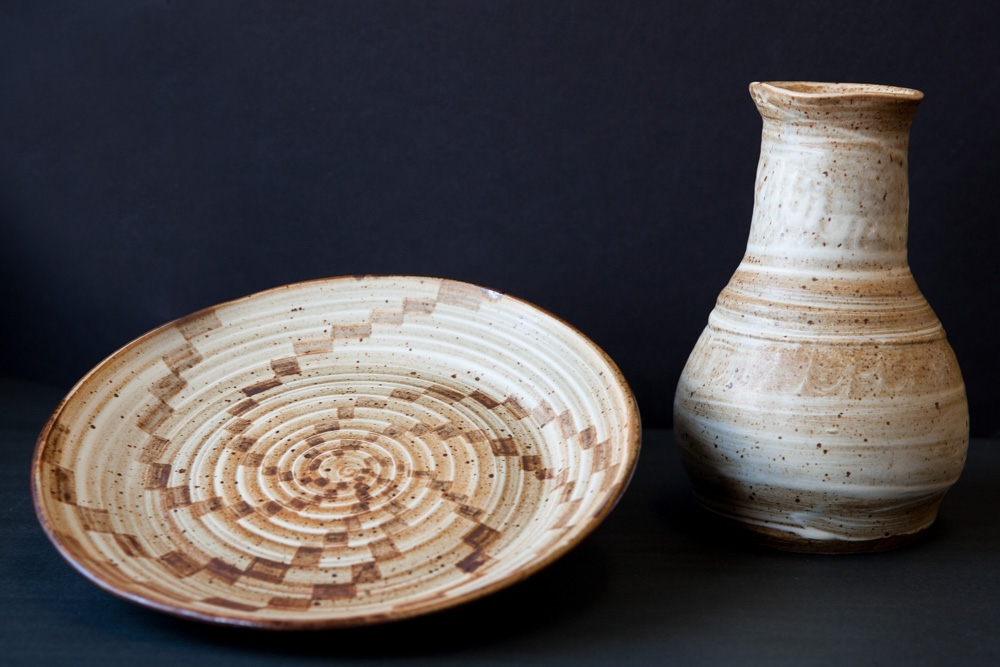 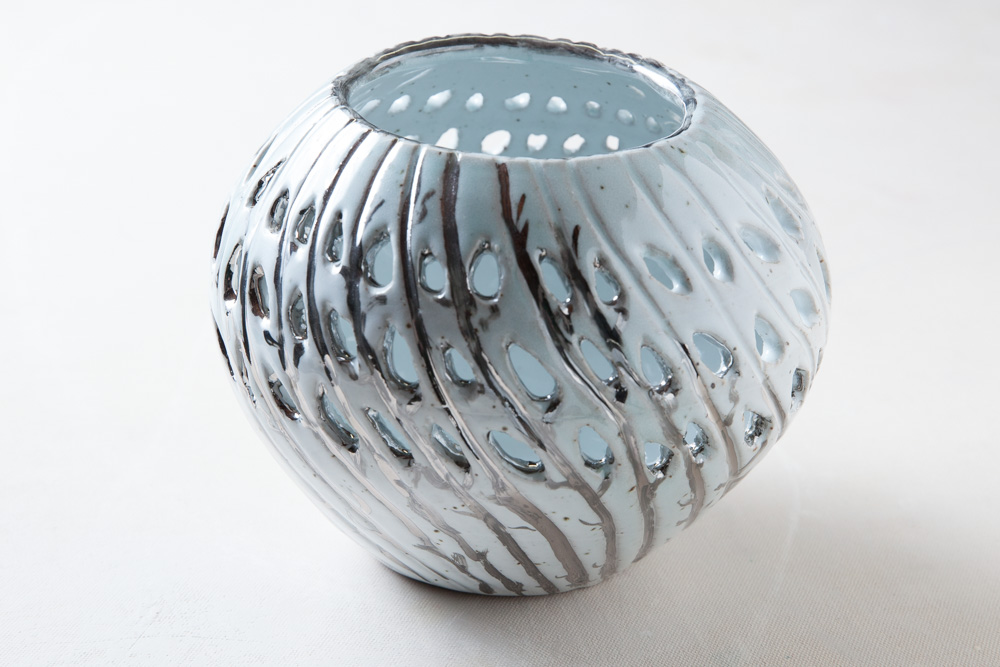 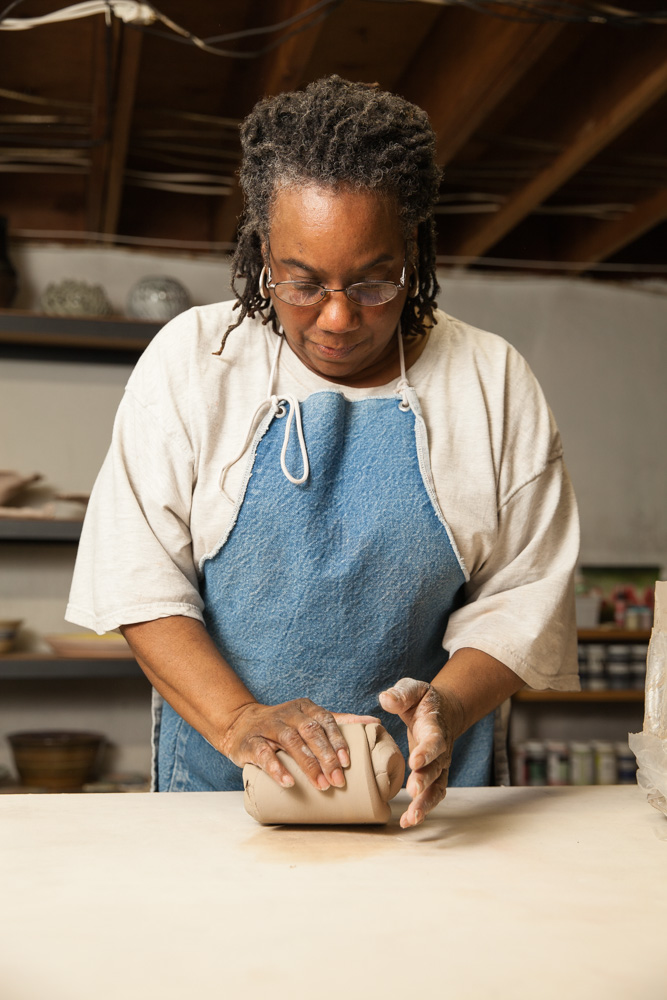 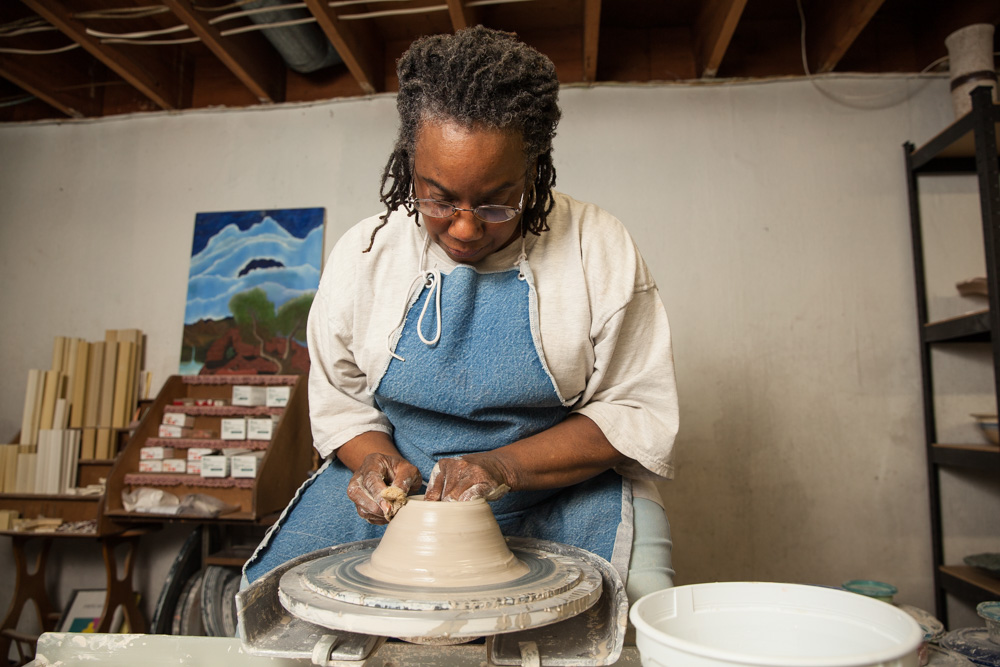 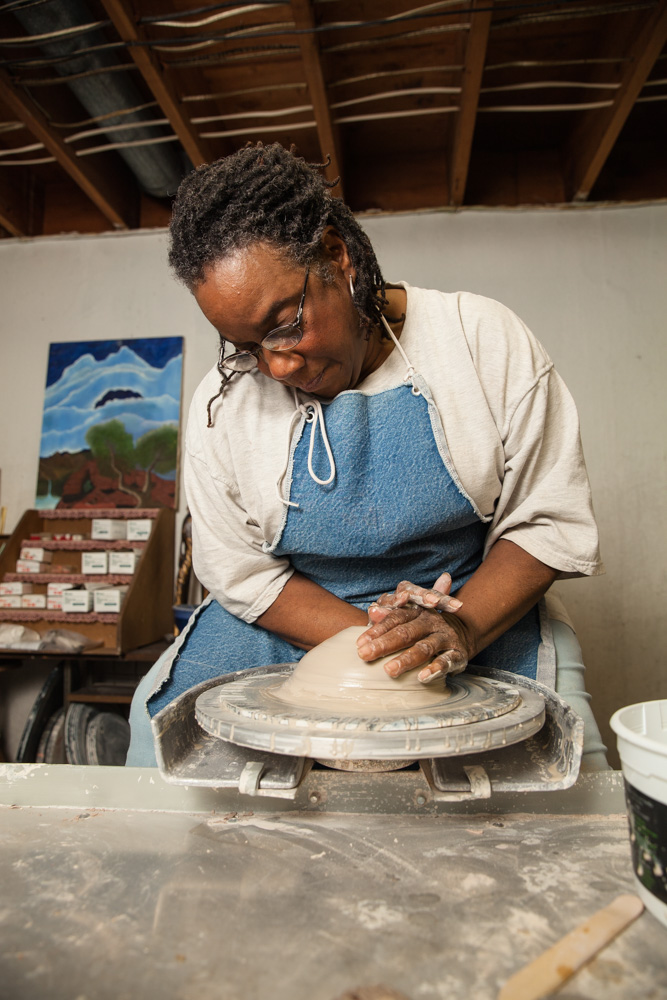 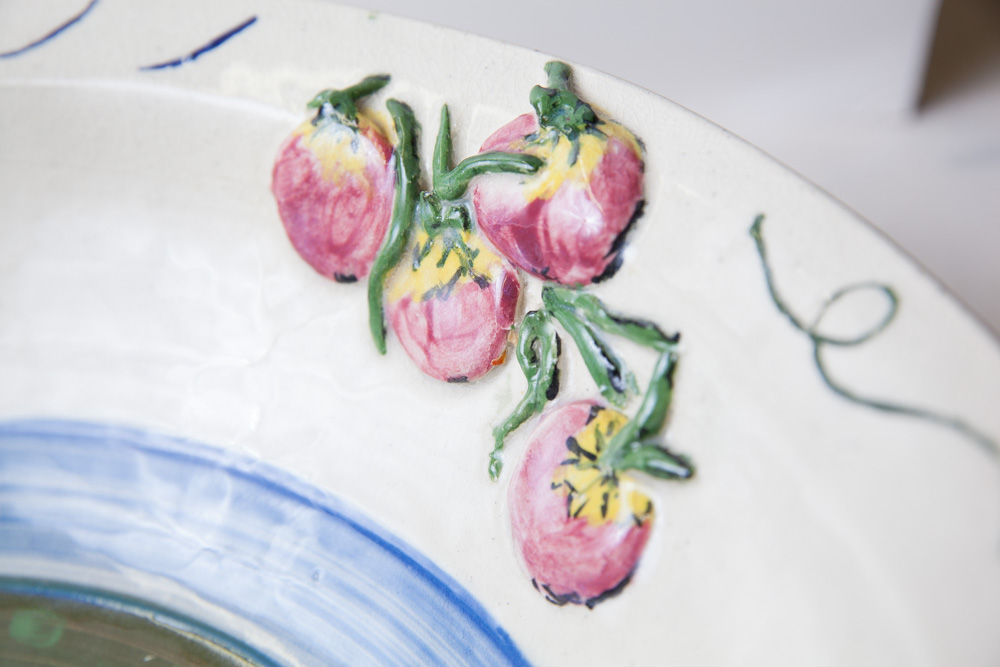 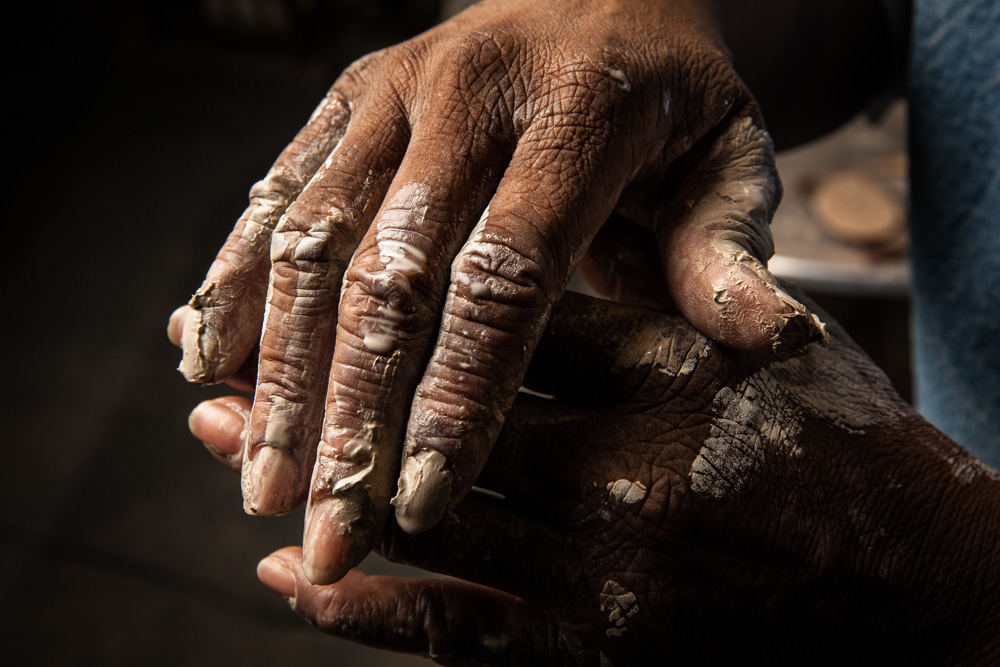 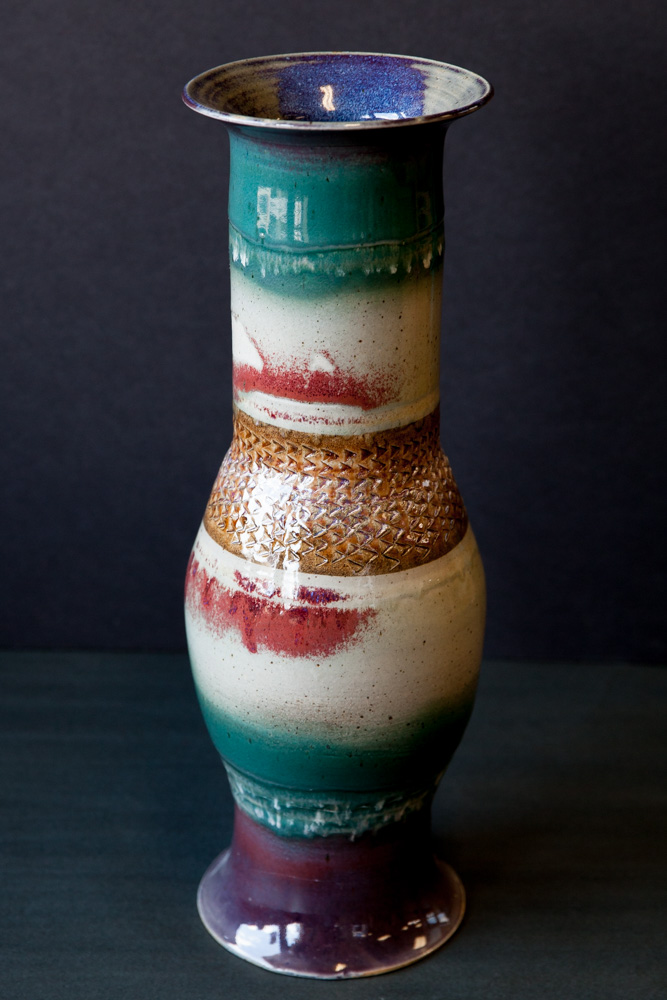 What is the process of making pottery? According to Valorie, the first step is to “wedge” the clay to establish consistency and get out all of the air bubbles. The clay can then be hand-shaped or thrown on a pottery wheel. “The clay must first be centered on the wheel,” she explained. “If you’re making a platter, you go flat, and if you are creating a vase, you go tall. Everything is different,” she laughed. After the shaping is complete, you can incise it to make decorations. Then, the pottery is fired two times – a bisque fire and a high fire in a kiln. The piece is glazed after the first firing.

Valorie’s favorite piece to create is a breast plate, which can be hung on a wall or placed on a pedestal. Each one she makes tells a story. “They speak to my life,” she said. The idea behind her most recent breast plate was the turmoil in Ferguson, Missouri. It is decorated with a heart pumping red, black and green blood, and if you look closely you can see the symbols of the seven principles of Kwanzaa with emphasis on the first principle, unity. She is currently working on a piece commissioned during her art show, a bowl that looks like a basket, brightly colored and with very intricate details.

Just as her mother did, Valorie has passed on her love of art and music to her own children. Her daughter Kenya has a beautiful voice and her son Omar is a music engineer and producer with his own business, Chosen Few Corp. Wanting to share music and art with the community, Valorie and Omar formed a non-profit organization, Chosen Few Arts Council, which helps underprivileged children have an opportunity to experience music and art.

Valorie takes much pride in her work and her focus is making quality pieces that belong in a gallery. “Someone told me that 100 years from now the only things left will be our art and our music,” she said. “My work is inspired by my heritage. I want to leave a legacy that my pottery was here.” ♦