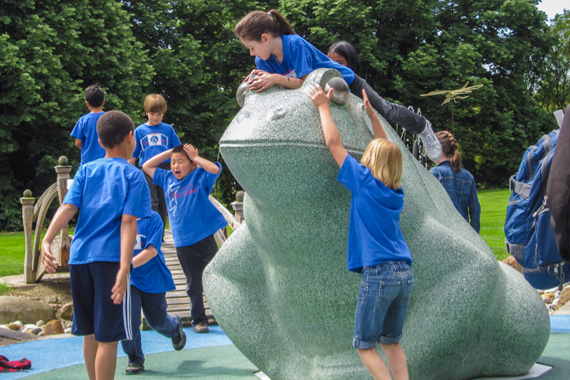 The frog that greets visitors to Applewood Estate has a long history of making kids smile. Built by renowned sculptor Marshal Fredericks, this statue was commissioned in 1970 for the opening of the Genesee Valley Shopping Center. After years at the mall, he was transferred to the Flint Children’s museum in 1986; however, when the Museum moved to their new quarters in 1993, the building’s floor was not strong enough to support the frog’s 6,600 pound concrete and terrazzo weight. The frog was placed into storage, where he remained for over a decade, until he re-emerged into the sunlight at Applewood in 2004, being purchased by the Ruth Mott Foundation for $35,000. A new generation of kids—and kids at heart—enjoy climbing up and sliding down the back of this giant green friend.